Hello Readers!
We'll get to the snowfall in a little while.
I've decided I'm going to give these endeavors of my muse, numbers, so I can keep better track of how many different things get made this year. I won't necessarily count each individual thing I make, like the hearts, I've been working on. I won't count them as 20 items. I will count the number of things I make with them. I may only count the whole lot of whatever gets made from the hearts as one unit. That's what I've done with the sweater flowers and other things as well. Anyway, I'm going to give them numbers.

Origami is one of my favorite things to make. You'll see it throughout the year.
I love the challenge of folding something new.
Sometimes, I will fold many of them, sometimes I will fold only one. 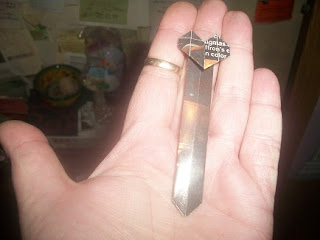 44. Origami Heart Bookmark
Magazine page cut into a rectangle. This is an easy origami project. I glued my folds shut along the shaft of the bookmark so it would hold together better. It is not necessary to glue it though. If you'd like to fold an origami heart bookmark you can follow the tutorial that showed me how to do it. If I can do it, you certainly can do it, too!
http://www.youtube.com/watch?v=gml2j4bvT88&feature=relmfu
Any paper will work for origami. The thinner the paper, the easier it is to fold though. Regular copy paper would be about as thick as I'd go trying to fold origami projects. I've not tried it, but tissue paper, I'd think would be too thin. 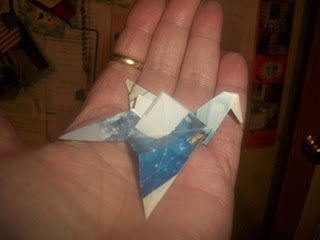 If you do a google search for Origami Crane, you'll find a good number of tutorials to choose from. I did not save a link to my favorites because I know how to fold this one with needing the instructions anymore. And it's an easy one to find, should I need a refresher course the next time I do a fold of this crane.
Magazine paper again. Magazine paper is great for practicing because it's readily available and it's free.
I've been having sessions with Mr. Kitty. He's now a pale orange color. He still smells like baby powder which is quite nice considering the orange paint I used on him is wall paint and it doesn't smell all that pleasant. I was going to work on him some more last night but.... 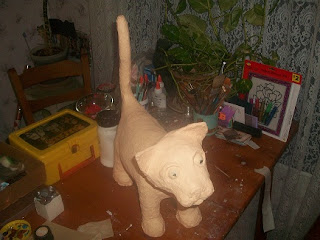 when I sat down at the kitchen table, I felt the need to organize things instead and Mr. Kitty found himself back up on top of the metal cabinet in the kitchen.
I found a tutorial for some paper mache butterflies made with the paper mache clay. I had some left over PMclay from doing Mr. Kitty. So I drew up some butterfly templates on chipboard, cut out about 8 of them.
I got PMclay on one little butterfly and one big butterfly. I threw the little one in the trash the next morning and the big one is sitting atop the metal cabinet with Mr. Kitty cause it needs some more attention. My muse excused it for the time being. Just like she excused the pink tree canvas. There was no helping the little butterfly. You can only go so small with paper mache and I'd gone past the limits!
I wish I could say the kitchen table is now organized, cleaned off and ready for Mr. Kitty's finishing, but that would be an out and out, big fat lie! Cause all the stuff I organized...it's still sitting on the kitchen table, just now it's in a bunch of little containers.
The weather gurus were a bit off in their predictions.
They said we would get between 8 and 12 inches of snow.
We did not. 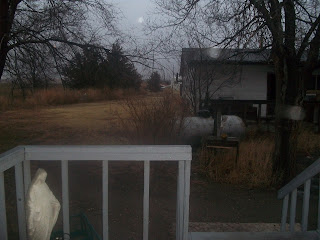 It was dark when it started snowing and this picture has nothing to do with the snow cause it was taken the day before it snowed. Yesterday it snowed, 4 Feb, Saturday. This was taken 3 Feb, when it was dang near 65 degrees for a high temp!
Guess we still aren't to the snow just yet.....
Here's Billy. 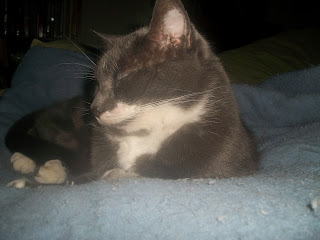 I'm afraid he's not too entertaining at the moment. He's asleep on the end of my bed. Or he WAS asleep till I sneaked in in the dark and woke his hide with the camera flash! I took about six, maybe seven pictures of him right then and in none of those pictures does he have his eyes open.
Lazy critter!
Finally! We're to the SNOW! 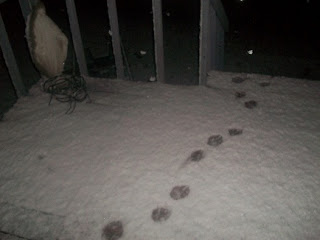 It had been snowing for no more than an hour when I first noticed it was snowing.
Fred wanted out and that is when I discovered this magical wonderland right outside my door! 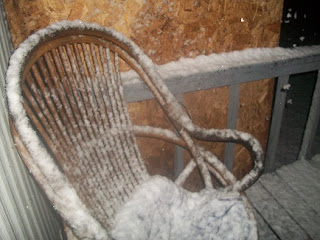 Do you see the big white specks in both the pictures above? Those are snowflakes. Clumps of snowflakes, more like it, falling from the sky by the hundreds of millions! It was so incredibly cool!
That fool dog barking at the top of his lungs in the silence and the dog up on the hill answering with barks that sounded as though he were right in the back yard. Up on the hill is a good half mile away. 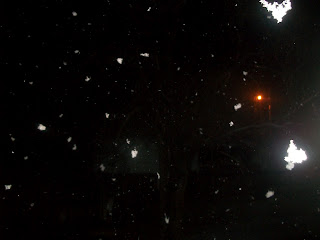 Out the front door, looking toward the highway, porch light off.
The bright orange glow is the yard light in the upper driveway.
The camera just couldn't capture the snow correctly with it being dark outside. These last ones were taken out the back door where there is no light to speak of. 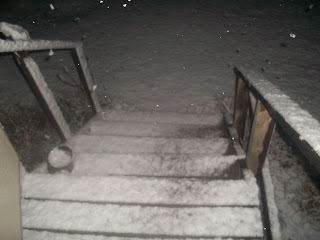 I had just hollered for Fred to come along. He was over by the tree in the field between my and Susan's house. I took this picture JUST before he got to the stairs. I tried to get a picture of him out in the snow too, but it was just too dark and snowing too heavily to get a decent one. 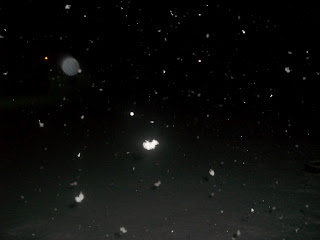 And more snowflakes. It was raining/sprinkling the same time it was snowing and a raindrop fell on the camera lens for this picture. 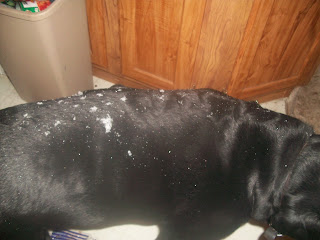 Fred with snow on his back. The snowclumps were quite large!
It was magical! Watching it come down silently.
I was secretly hoping for a whole boatload of this wonderfully wet, snowman-making snow. It wasn't to be though....it did not happen. I hoped for it, not so I could go make snowmen--that's never going to happen again in my lifetime--I wanted it so my son, RW and his boys could make snowmen!
Half an hour later Fred's tracks are almost obliterated and it's still snowing clumps. 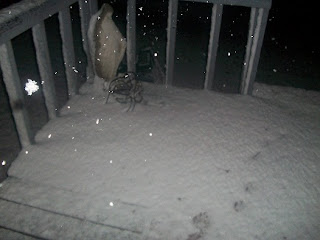 Unfortunately it did not do this for hours and hours. It suddenly stopped a few hours after it started and left not more than 3 inches on the ground.
RW is not a happy camper, I'm betting. He was wishing for a couple boatloads of snow. Need to call that boy and see how much snow he got to the north. He wasn't thinking snowmen when I had the conversation about snow amounts with him. He was anticipating going to work the next day. Would of been an easy peasy day for the boy had it snowed in the amounts he was wishing for and the weather gurus were predicting.
He's 23 miles north of me so it may have snowed significantly more there than it did here. 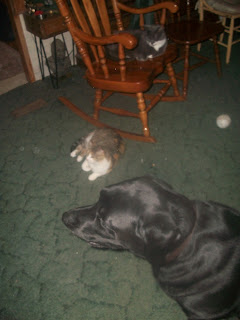 A Rarity!
All three of my furkids in one picture. 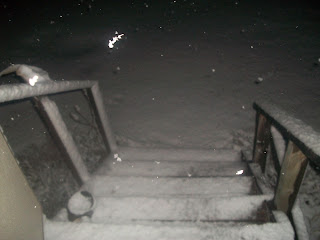 Half an hour after the first back porch picture.
Should have had Fred and the Cats in the last slot here but it didn't work out that way so there you have it! I'll just muck it all up if I try to fix it!

Someone REALLY needs to do the dishes and that someone is me! Yeah!!!! NOT NOT NOT!
I hate doing dishes but they are not going to do themselves! If I get them stacked tonight, I will be a satisfied puppy. If I get them stacked, one sinkful done and the trash taken out, I'll be a happy puppy.  My maid will probably be here tomorrow so I better get my butt in gear and do something about that kitchen. She hates it when I leave a giant mess for her. She can complain, I don't pay her to come do my dishes. She comes of her own freewill. I love my maid! Thanks Ma!
You all be good to one another!
I'll be back again with more creative endeavors and I'll probably chatter on about this or that too.
PEACE (if only)
831
Posted by Donna at 8:36 PM