Hello Readers!
It's been a few days since I was here!
I haven't done a lot of art in the last ten days. I rearranged my cutting room and was busy going through mounds of art fodder and what have you. That project is 99% complete now and the muse was faunchin' at the bit to get some painting done so beings a chunky-athon is happening this weekend over at AFA (link's on the sidebar, top right) I decided some painting would happen!
I did a bit of collage too yesterday and today.
Enjoy! 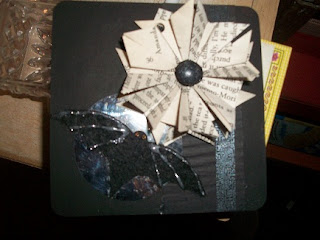 Bat Chunky
I made about 30 of those paper flowers one day last week. Forgot to take a picture of the pile of them laying on the cabinet on the other side of this room I'm in. I'll show those in the next post. This one is collage on a drink coaster, painted black. There's some black paper I put through the crimper, a strip of scrapbook paper, a brass brad in the middle of the flower with black glitter on it. The bat is some kind of felt-type fabric that came off the bottom of a small kitchen appliance of some sort that my brother junked. The bat is sitting atop a round of silver mirrored contact paper. Silver glitter glue on the bat and his eyes are two tiny metal beads.
That hole in the top of the flower shouldn't be there! I was trying to get the brad to go tightly against the coaster and I wasn't paying attention when I thought the large crop o dile would work to accomplish that....nope...it didn't work out so well. I punched a hole where there shouldn't be a hole! I'm still trying to figure out how to remedy that situation. 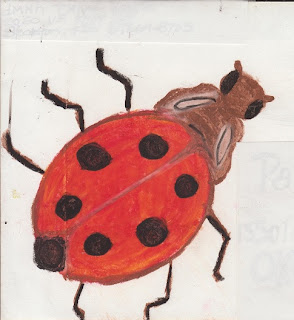 Lady Bug Altered Envelope
oil pastels on plain white envelope
Only half the envelope is showing in the scan. Didn't see any reason to show nothing but white paper on the right hand edge.
When I took this one to the post office to send it off to its recipient, the postmaster gave me a load of crap about it. He always gives me a hard time though so this didn't surprise me in the least. I know it's not the best ladybug I've ever drawn, but it isn't as bad as he made me feel about it! I hope the next post office run isn't as depressing at that one was! Truth be known, I'm like a duck when it comes to his crap....I let it roll right off me and don't really give a hoot about his opinion! His opinion doesn't matter to me, the person who got this envie said she was delighted with it...whether she was or not, she made me feel good about it because she said she liked it a lot! 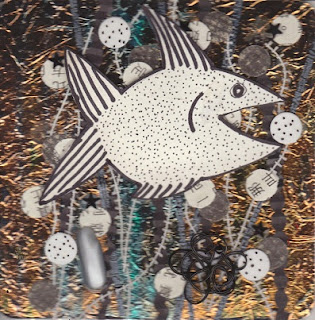 Black and White Fish Chunky #1
Done on a drink coaster painted black. The first layer is a sheet of mylar that is irredscent. The little bubbles are mostly different types of paper. The ones with the little black dots are a thin foam of some sort. Not sure what that disk came from to begin with. My paper punch went right through it though and it worked for the background. The white strings were from a mesh fabric that I cut into strips. Not sure what it was originally for either. The black flower shaped thing on the bottom right is a tattoo ring and there's some black paper that went through the crimper before I cut it into strips with decorative scissors too. The gray stone on the left hand lower edge is a glass stone. I drew the fish on some book page paper with a black sharpie or two. 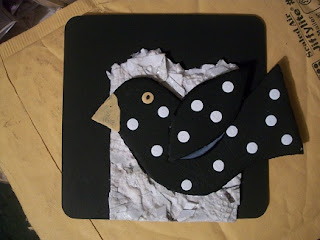 Black Crow Chunky
The base is a drink coaster painted black. The white thing the crow is sitting on is a piece of handmade paper that someone sent me in a trade a few years ago. It's quite thick and I hadn't a clue what it would be used for till yesterday when I pulled the cute little crow out of the black collage box. My sister made the crow out of a black foam meat tray and acrylic paint. 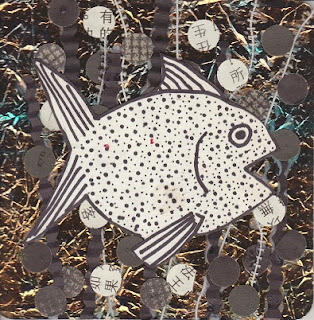 Black and White Fish Chunky #2
made with the exact same things as the first fish minus the little black stars, the glass stone and the tattoo ring. 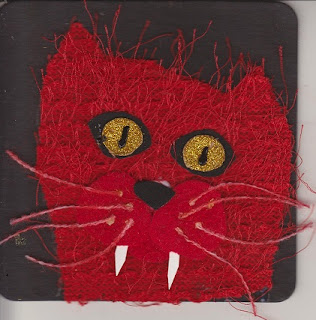 Red Kitty, Fang #1
Chunky page
I saw a red kitty on Facebook that had fangs and I HAD to make my own version. I think mine is cuter than the one I saw on FB...that one was a bit creepy actually! The base is a drink coaster painted black. Kitty is made from an old sweater, his cheeks are fleece, his nose and eyes are fake leather, his fangs stiff paper and the pupils of his eyes are cork pads with glitter and dimensional paint. His whiskers are white crewel embroidery colored with red sharpie. 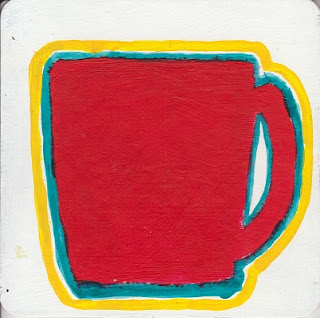 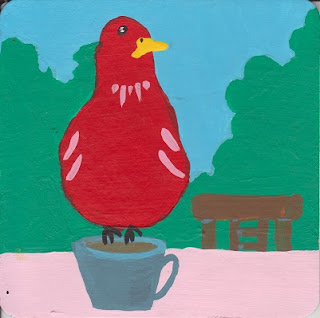 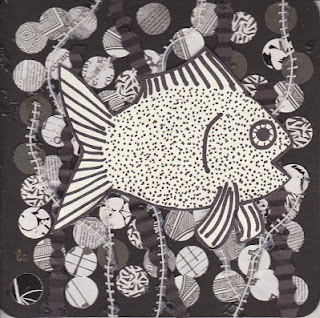 Black and White Fish #3
Chunky page
I had so much fun making the first two fishes I figured what the hey! I'll make another one. Same stuff, different papers. 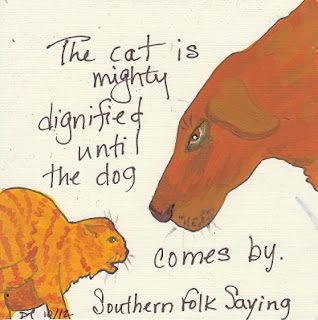 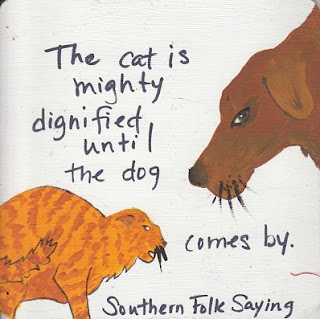 cat and dog  #2
Chunky page
acrylics on drink coaster
I traded the first one before I ever got it in my gallery and then not two minutes later some else wanted another one! I like the first kitty the best but I think the second dog is better than the first one. 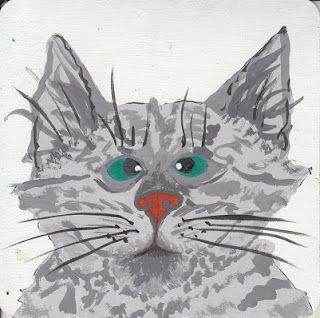 I need to give that scanner bed a wipe down with some window cleaner! It's a mess! Might as well clean my monitor while I'm at it! You all can't see my monitor, but it's worse than the scanner bed!  All those spots and splotches you see on the scans are not really there! 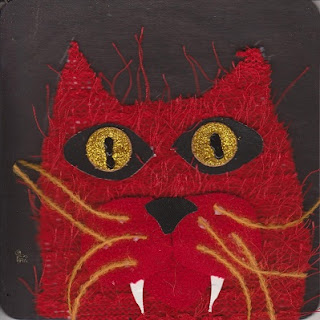 Red Kitty, Fang #2
Chunky Page
Made exactly like the first red kitty except the string for his whiskers is red crewel embroidery thread. It looks orange on my monitor, but it's really red!

and beings I had a run on the red kitty....traded three of them within minutes of posting the first one, I had to make more. 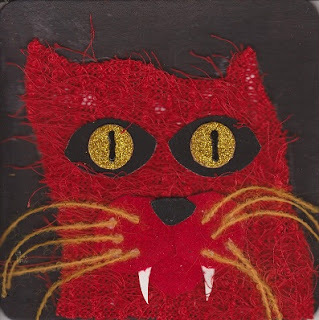 Red Kitty, Fang
chunky page
made the same as #2 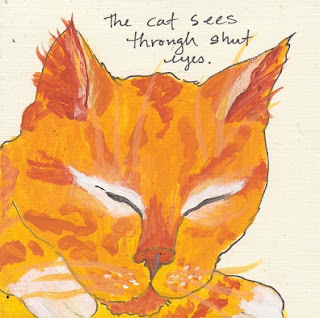 If I get done with the work that is slated for tomorrow out in the burnt house, I'll probably do some more chunky pages. No clue what the muse will think is a good idea to do on chunkys but we shall see!
Thanks for taking a peek at the creations!
Be good to one another!
It matters!
Peace, my friends!
831

What a lotta chunkies and kitties- like the cross-eyed one best. ha ha.