A Reorganization, Some Confused Critters and A Little Purple Star

Hi Readers!
For some reason I feel the need to always make the title of these posts into a three part take off. And I usually get it out of order as well...

We'll start off with the confused critters, but in reality, the reorganization did come first.

My living room is a disaster zone!
Looks like a hoarder lives here! 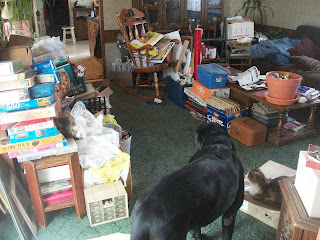 Fred dog and Lola seem to be surveying this horrendous mess wondering what the devil it's all about!

I've been busy for the last three days emptying my cutting room in preparation of some badly needed shelves! 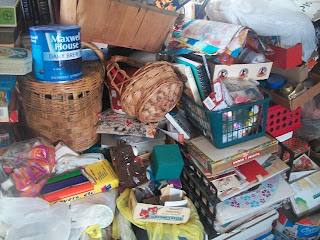 A close up of one tiny bit of the mounds in the living room. All that mess must be gone through before it can fill the new shelves in the cutting room. One box at a time, sort, sort, sort, toss, sort, sort.
There are cow horns in that tall round basket under the maxwell house coffee can. I've had those cow horns for about five years now...still trying to figure out just what the heck to do with them. Inchie cubes in the coffee can. The long wooden basket atop the heap has some elmer's glue in it. It was full of elmer's glue two years ago when I bought around 50 bottles of it for 20 cents a pop, on sale. They want 50 cents (or more) for the same thing today.
Lots and lots of stuff to go through!
I found things I'd lost two years ago! I found things I don't ever remember laying eyes on. I found things I'd forgotten existed in my world.
Putting it all away will be a chore but I'm going to enjoy the adventure! 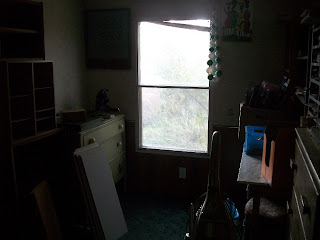 I'd love to be able to fix that dark line at the top of the window in the cutting room. The attempt to do so yesterday was a total failure. It is only a cosmetic flaw, but sure doesn't look pretty! The cutting room isn't really this dark!
Click the picture and you'll be able to see it larger.

I don't have a picture of the cutting room before I started to move things around and add some shelves to it. Before, it was a total disaster area. Even worse than the living room looks at present! I could barely see the floor for all the bags and boxes sitting there cause every available surface in the room (except the paper cutting table) was already covered in bags and boxes of things I had dragged home for months! The cutting table used to be at the opposite end of the room where it is in the picture now. It's the green chest of drawers in the corner. The boards leaning up against it are the shelves for the big shelf that is not yet made. 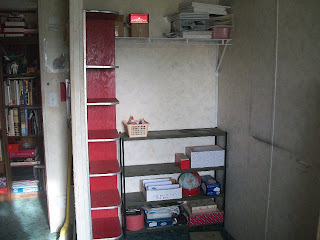 That's more the light level in the cutting room.
This here is the closet area. Yesterday there were doors on it and that red shelf wasn't there. And it was filled to the rafters!
The red shelf isn't technically mine. It's been sitting out in the burnt house for over a year now. It belongs to my next door sister. She about had kitten fits when I nailed it to the wall in the corner of my room out there in the burnt house and used it to store stuff on. I didn't tell her I was bringing it into the house to use.
I figure if I've had it this long, I can with it what I want!

I hadn't realized that black stripe was on the wall till we moved the paper cutter table and then removed the closet doors. Apparently one shouldn't decide to spray paint keys in the dead of winter inside!

I took most of what was in this closet to the north bathroom where I've stacked all the containers.....such as empty boxes, tubs, totes, jars, things of that nature. The top shelf held mostly empties. I took three things to the livingroom to join the rest of the mess until I figure out where it will end up after all the shelves are in place. The bathroom looks like a hoarder lives here too! Sorry, no picture of it!

All the books you see in the left side of the picture are in the hallway. There are four book shelves, that size, lining the hallway. Not all of them hold books, but the majority of the things on the shelves are books, my man collection and More art fodder!

If truth be known, I have what some would call a lot of crap! I prefer to call it art fodder, inspiration, knowledge.

And yeah, some of it is crap, I suppose.

I threw away a lot of stuff out of this closet for the simple fact I hadn't laid eyes on it in three or more years and it wasn't good stuff anyway. What the heck did I think I needed with 4, maybe 5 dozen, I don't know, I didn't count them.....dog food and cat food bags? Whatever the heck it was, it went by the wayside and I do not need all those bags! Besides if it comes back to me, I collect two bags every three or four weeks anyway!
The box of papers I can't throw away will go live in my clothes closet in the bedroom where the other box of papers I can't throw away live.
Freed up a LOT of space in that closet!

Gonna have to give the dremel a workout with those cow horns I dragged out from under the work bench in this room! (Something came to me just now.) I found the dremel in the closet. I knew the dremel was there, but it was near impossible to get to with it being on the top shelf, behind the doors and the tub not only holding the dremel, but a ton of rocks to be carved as well! The blue tote in front of the coffee table in the first picture is where the dremel is located. I haven't carved rocks in almost 13 years! Granted, they aren't huge rocks, but still.....almost 13 years I've not even considered carving rocks! I'm going to get that dremel rigged up so it is accessible whenever I want to use it instead of having to drag it out!
Those weren't the only rocks I found in the cutting room....I am a rock hound! All those rocks will end up in the new big pot Ma planted the diffenbachia in the other day. (It's sitting on the end of the coffee table in the first picture.)Then I can reclaim my stone eggs and put them back in the basket by the shelf in the living room. The rocks are all buried in that pile in the living room and had we left the dirt bare in that pot, Miss Lola cat would have thought that fresh dirt was for her amusement. She won't dig in it if there are eggs or rocks in it! 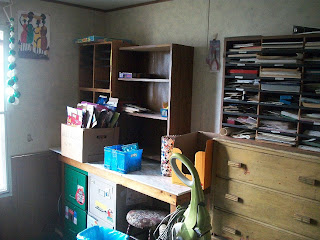 The ugly brown dresser with the paper shelf atop it used to be on the other wall. The two file cabinets under the work bench were moved from other parts of the room as well.

At present the green file cabinet is all but empty. Has been for some time now.  I really couldn't tell you what is in it right now without going and taking a look! The other one holds my art reference files (aka morgue) in the top drawer and random papers in the bottom one.

Tomorrow Ma will bring the boards to build the big shelf for the south wall. We cut the shelves for the big shelf today.
We'll get the brown shelf put together with all its shelves and the red shelf from the old kitchen will come home also.
Ma took the old red shelf home with her to refinish it. It survived the house fire but has been sitting out there in the burnt house for going on seven years. Nothing done to it since. She built that shelf for me right after I bought the burnt house....must be neigh on 12 years ago? Anyway, I'm glad I didn't pitch it during the clean up of the burning. It used to hold all my cook books but now it will hold art fodder!

I'm anxious to get those shelves in and filled up with the piles in the livingroom!
I'll actually be able to find things when I need them~!
Least that's the plan!

I"ll keep you all posted on progress.

I had a set back in the art progress for other reasons than the organization going on so there isn't much in the line of art in this post and I'm not sure there will be any art progress for a few days, at the least.
I did sew a little star fish the other night while I wasted two hours watching a movie. I can't even tell you what the name of that movie was....as I said; it was wasted time...well, other than the cute little star fish ornament. 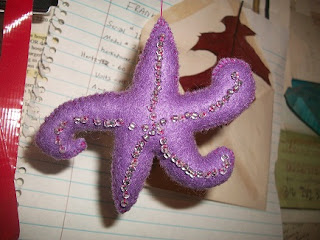 He's about 3 inches across, made of felt with glass seed beads sewn to the front side. I did not have any regular sewing thread in purple so I used red instead.  He's stuffed with fiberfil. I drew up the pattern for him.

I can't remember if you all have seen the fishes and green paintings yet or not....if not I'll do another post of those before I call it a day today. I've  been home from eldest son's house for a week and a half now, I know I've done a bit of art since then. 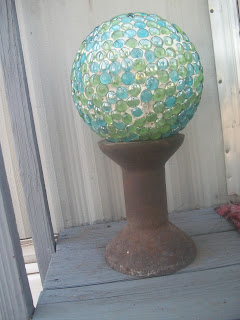 I was hunting for a 'before' picture of the cutting room, thinking I had to have taken one somewhere along the line. A thorough search of my pictures did not yield one picture of the cutting room at all! I did find a few cool things other than this bowling ball covered in flat glass marbles that sits on my front porch. I'll show them some day when I get them all into one folder so they're easier to move to a post.  My mother assembled this ball. I brought the farm implement part home from a junking excursion a few years ago. I need to paint the iron stand so it matches the glass marbles. It was a bowling ball. Ma covered it with the flat glass marbles by using liquid nails to adhere them. I suspect one could use any sort of silicone caulking or such and end up with the same results. Every once in awhile a marble will fall off and I'll stick it back on with some E6000. She gave it to me for Mother's Day! She made three of these year before last.
I have three of those farm implement parts. I think they're spacers on a discus...machine that makes furrows for planting? Not sure. I ain't a farmer! :)
They make cool ball stands though cause they have a big hole through the center of them and a ball sits there perfectly.

Thanks for reading!
Be good to one another!
It matters!
Peace!
831