this and that and then some

The calendar says it has been five days since I was here last. Feels like it was yesterday. I've been sleeping a lot for the last three days. I have felt like something the cat dragged in and left laying on the floor where it fell. I am much better today though. I threw my back out this afternoon while digging through a box that was sitting on a chair. I bent over just far enough and out she went! I've sat on my ass in my straight back chair in front of the computer all day, drawing 1 x 3 inch masterpieces with my markers. This chair is much more comfy for the old back when she's out than the recliner in the livingroom is. I don't hurt too bad sitting in this chair, but it's a bear to stand up and get going again!

Before the sun went down, earlier this evening, I took my lizard cane out on the back porch for a session of whittling so its new rubber tip would fit. I wore the old rubber tip right through the bottom! I decorated that cane almost two years ago. I got a new wooden cane on the yard sale hop I went on with Ma last weekend.
I want to finish the snake cane before the first of November. We'll see if that happens. It's been waiting in the wings for a few years.

I've worked on the two elastic projects I showed you all in the last post. 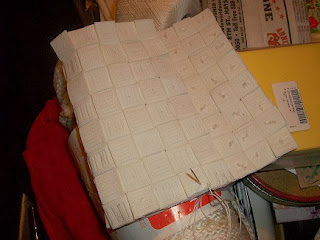 I started sewing the envelope together. I wasn't much into it. Sewing through 4 layers of elastic is hard to do! I wasn't feeling all that great when I was doing it and my heart just wasn't in it so this is still a work in progress. But progress has been made! 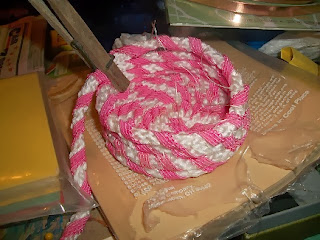 As has it progressed with the little pink basket as well. Same day, same crappy body aches. I just wasn't into it. I did sew two rounds on this little guy though. I'm liking how it is looking! 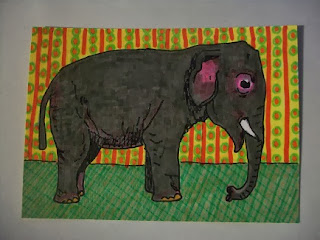 I drew a few ATCs. This is Asian Elephant.
markers on cardstock 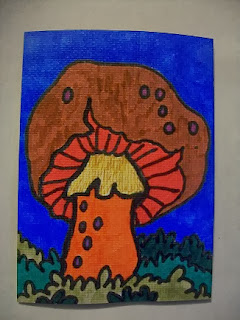 I bought some ATC blanks on clearance at Wally World last month. There were three packages of three different kinds of cards. One package had a whole slew of different colored cards in pastel paper. This one was done on white though. The paper isn't very thick and needs a backing on it for sure. 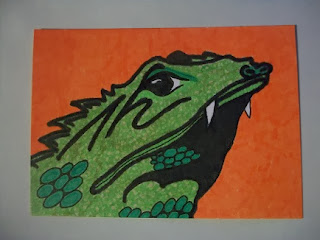 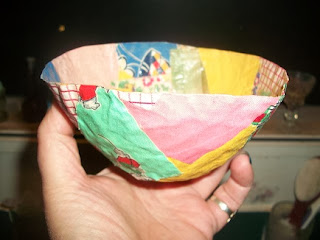 I told you all the bowls were still calling to me. I made one from fabric scraps, tissue paper and glue. It wasn't exactly a success. It's a cute little bowl but... 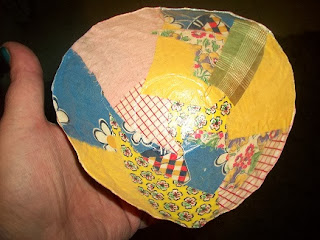 It's a damned wonky little bowl! I should have put a few layers of newsprint between the layers of fabric on the inside and outside of the bowl. I used two layers of tissue paper. That wasn't enough apparently. It's a flimsy little bowl as well as being wonky.

I've got a whole box full of little fabric scraps! I think another experimentation with the fabric bowls will happen in the near future beings as how I already have the mold covered in tin foil and ready to go.

I started some fish. 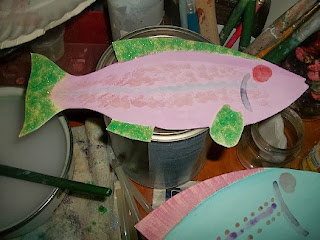 Wish I could say these fishes were for the newest fish picture, but they aren't. They're way too big to go on that thing! This one above has glitter on his fins. I've not yet taken a good look at that fish since I put the glitter on his fins so I don't know what's gonna happen before these things are done. 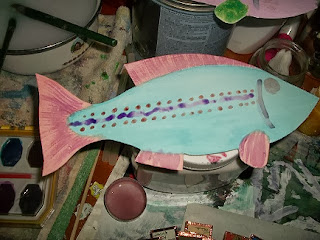 Might just be more glitter on the horizon for them. 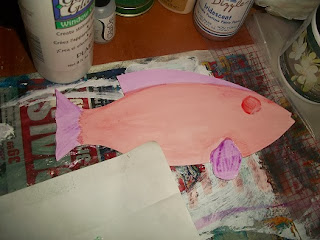 Your eyes aren't fooling you. This one is shorter than the previous two. I cut this one out of a different box then the previous two and the bend in the box was in the wrong place. It was either cut his tail short, make his nose have a big crease or get a different piece of boxstock. I chose to make him short.
You'll see more of these fishes in the next post. I traded one of them this morning. Can't send it away if it isn't done.

Yesterday Ma brought me a box of microscope slides. She paid ten cents for them at a yard sale on Saturday. It is a box of 72 but there were a few missing when I got it. I used 18 of them today. 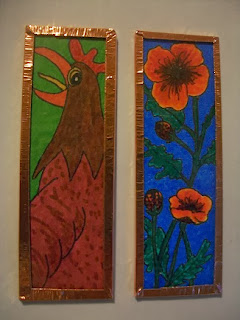 I drew 18 masterpieces today. All are markers on one of three papers:
manila cardstock
linen cardstock
paperboard
I don't remember which is on what. 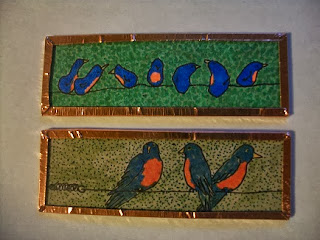 It is one microscope slide with the drawing held to the back of the glass with copper foil tape. I'll slap a magnet on the backsides and put them in the inventory for the shops. 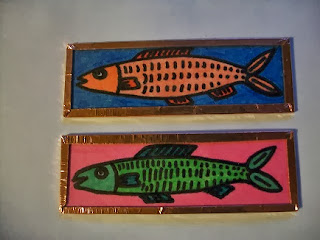 All of them are done with markers. 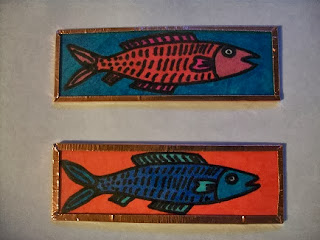 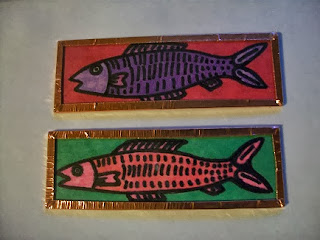 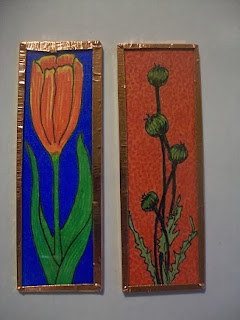 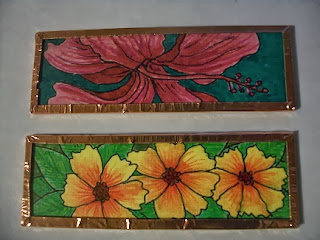 It looks like a lot to do in one day. Some of these took longer than others to draw and color. The six fishes that look pretty much alike were the quickest besides the two red and blue ones that follow. 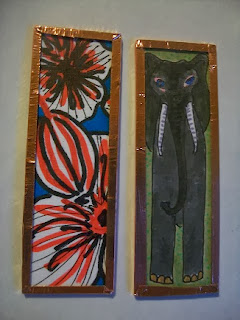 The red and blue one is part of an ATC. I did the elephant first before any of the others. He's my least favorite of these. 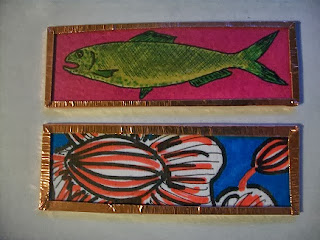 I've worked on Fish Picture 9 also. Haven't worked much on it...but progress has been made. 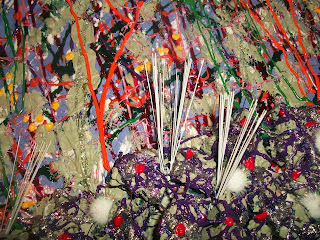 If you click on this picture it will get bigger and you can see some detail on it.
Those black and white 'sticks' are broom bristles. Nylon, I think. I bought a bundle of about 3000 of them for a dollar. I tied a small bundle in a knot and stuffed them between the rocks on the bottom of the canvas. Those are the only new doodads added to FP9.
There really isn't any rhyme or reason to how the colors get on the canvas. I don't know where this is going! I've never made a fish picture with such a background before. If I put strings on this thing, they are going to disappear! 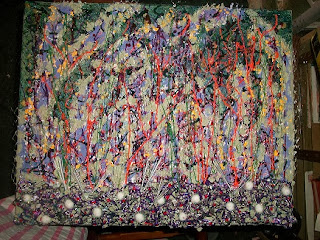 It's rather Jackson Pollackish, yes?
I think a revision on fish color is in order. I said I was thinking the fishes should be bright green....I'm leaning more to a very dark color, black perhaps, so they'll show up in that chaos!
Work continues on the doodads for the rock shelf.

That's it from my neck of the woods!
Thanks for stopping by!
Remember....
Be good to one another!
It matters!
Peace
831
Posted by Donna at 1:28 AM