A Long Post of Tales to Tell! Art, Travels and Cold Zombies 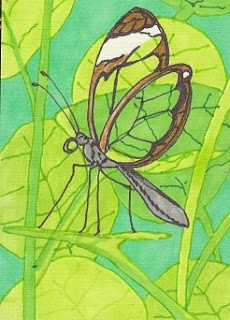 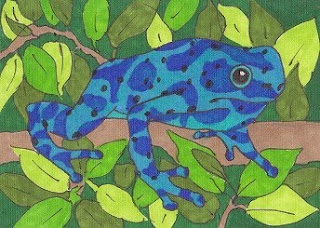 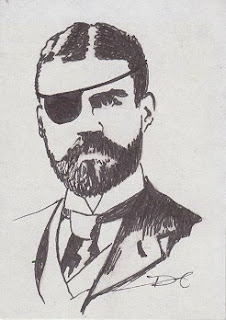 Dr. Lazear
8 February 2010
ATC
365 Project #39
Marker on drawing paper attached to recycled cardstock.
Dr. Lazear is a real man. Jesse William Lazear. I drew this picture from a photograph of him. He died of malaria around the turn of the 20th century. He is a hero. Wikipedia will tell you more. He doesn't actually have an eye patch. I added that to him. He was a very handsome man. I screwed up his right eye something fierce and ruined his good looks completely! Looked as though someone had punched the poor fellow in his eye. The eye patch improved the look I gave him dramatically!
Travel involved a couple of things, the zombie snowmen included but we'll get back to that in a few. I went to a SuperBowl Party that was more a bust than a party at all. I wasn't sure till late this afternoon just who won the Super Bowl. I'm still uncertain if the Saints did indeed win as I seem to believe they have. It's not really that big of a deal to me. I was home by 20 minutes after 8 Sunday night, long before the game ended. I wasn't sure I really wanted to go in the first place. There were supposed to be six people there. Half of them never showed up. We watched "Leatherheads" with George Clooney and Renee Z. (I can't even pronounce her last name at this moment, let alone spell it correctly.) I caught the last half of the movie. We watched all a minute, if that, of the Super Bowl itself. The movie wasn't bad.
Attending this wingding extraordinaire was my sister Susan and her friend Jerry and me. We gathered at Jerry's house. He's a good cook. He made burritos and hot wings. There were some nachos in there as well. The grub was yummy! Jerry fell asleep about 7:30 and abandoned his party. In his defense, he had been up since 3 a.m. Susan and I were not very entertaining at all to one another so I came home and Susan did whatever she did. I'm really not sure what she did.
I didn't want to go in the first place cause I really didn't care to meet a new person that night and I really didn't care to see that other fella that was supposed to be there with the new person I'd never met. Another man, his cousin or something...They never showed up though. Which didn't hurt my feelings none at all. Linda bowed out around 4 on Sunday cause she didn't want to drive over from Pburg and so she didn't.
I probably would have had much more fun had I accepted the other SuperBowl party invitation but I declined that invitation on principals and because it came too late. I'd already accepted the other one. Snooze, you lose!
I came home and played Majong till dawn.

I told you all about going to see the herd of snowmen at my son's house. The Zombie Snowmen! Well, that trip was made and there were indeed zombie snowmen in my youngest son's side yard. Not the nine they built though. Gabe knocked five or six of them down cause he's a little boy and what fun it is to knock down snowmen you didn't help build. Gabe is 7. 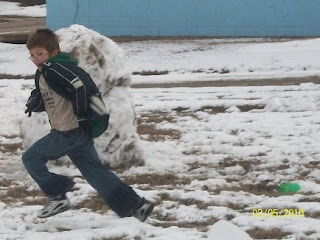 There's the culprit himself!
No one was really upset with Gabe for knocking over the snowmen but it was made clear to him it wasn't a very nice thing to do! He did leave the three coolest of the herd standing. Thank you, Gabe! 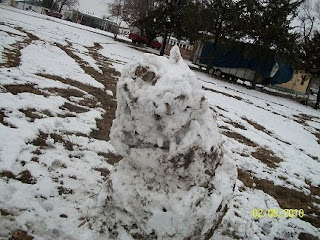 The Toothed Snowman
Yes, I know it's hard to decipher where this begins and where it ends...but there about a third of the way down from the top of it's horned head, is a large smile and four teeth present. I could see it plainly while standing in front of the snowman. I'm sorry it's not quite that easy with only the picture. This one isn't the cream of the crop, though. I've no clue if Gage or Rich built this one. 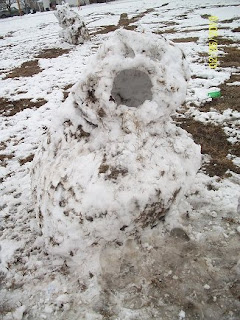 Gage's Zombie Snowman
Gage is 10. He and RW built all the snowmen with Grant's help. You'll meet Grant in a minute. This snowman is really cool! That gaping hole in his face is big enough to put a basketball in! This snowman came about chest high on me. He's very ferocious for being so short. 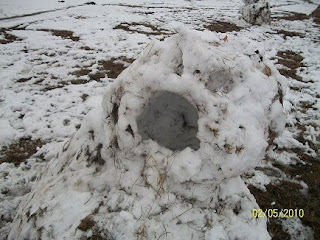 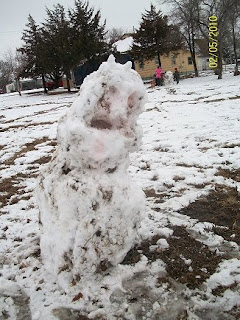 RW's Zombie Snowman
This fella is pink around his eyes and mouth cause RW spit red koolaid all over his face. (Creative Liscense or something like that?) The zombie dude is about 5 and half feet tall. I was eye to eye with it, I didn't actually measure it.
It would have been cool to have seen all nine of them but then Gabe wouldn't have had such a good time knocking the others down. They are, afterall, only snowmen and none of them are bound to last forever! 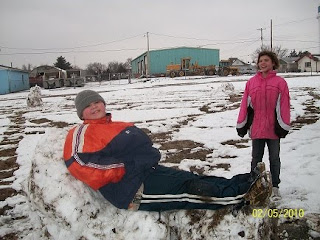 Here is Gage (and the neighbor girl. I've no clue what her name is.) sitting on the snow chair he constructed. No doubt from a toppled snowman. You can tell from the background there was a lot of big snowball rolling going on in that spot! There's a toppled snowman right next to the girl and another by Gage's head. Casualties of Gabe. There's the little rascal, Gabe! He's ready for a truce, no more toppling snowmen for him! :) 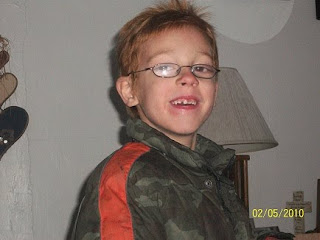 Here is Grant, his glasses fogging over cause he just came in from outside. Grant is 6. This is the kid that wanted a 25 cent alien from the gumball machine at the grocery store for Christmas. Not just ANY alien but a specific one! And! He wanted ME to put in quarter after quarter till I got the RIGHT one! That's an ambitious kid with a mind for business! He didn't get that alien or any other alien from that machine....I offered him the quarters to try for himself but he said he didn't want to sit in front that machine and try for the right one. He thought it better someone else take on that task. His other request was a whoopie cushion, which he did get! And has had a blast with! 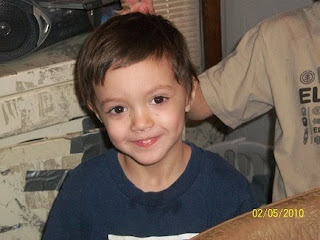 And we can't forget Gavin, who is just too cute for his own good! Gavin just turned four.
I had a fun afternoon with the grandboys!
My brother Sam rode along for the trip to photograph the zombie snowmen.I drove, he took pictures from the passenger's seat. Right before I remembered I had the camera in my pocket, we saw five deer in the field right beside the highway. Perfect photo opportunity and we missed it! I handed him the camera and told him to keep his eyes open for more critters and to take pictures. The only other critters we saw were little black birds and black cows. There's a picture of them but it isn't very exciting. So, courtesy of Sam, a few shots of the hills covered in snow. What they lack in excitement, they make up for in beauty. 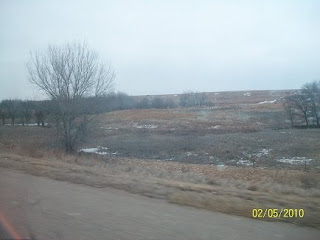 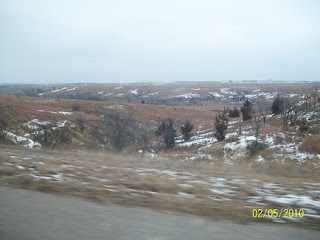 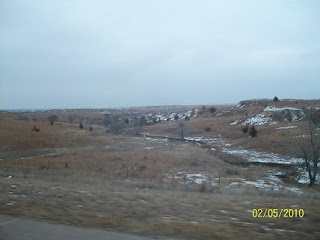 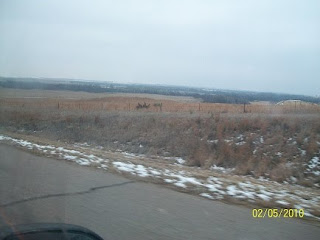 This is about a mile south of Glade on 183, looking northeast to the distance. These four pictures were taken within a mile stretch of highway.
I think there were about 260 pictures in this file when I emptied the smart card. Most of them taken by Sam.
I lazed away Monday. I have an interview at 2pm today that I can, and probably will, conduct in my pajamas. I just have to be awake for it!
I talked to my sister Jeanny on the phone for almost 2 hours Monday afternoon. She has a bunch of stuff for me. Artsy stuff....odd beads, paper, colored pencils, it's hard telling, really just what that box will contain when she finishes clearing off her table. Her art of choice is jewelry making.  I need to send her two twinchies of my choosing so she can make a pendant out of them. I sent her twinchies and inchies to make other pendants out of and this is what I'm getting in trade for those. I'll probably never wear this creation as a necklace, but will probably hang it from the rear view mirror in the van to go with the rest of the junk hanging there. 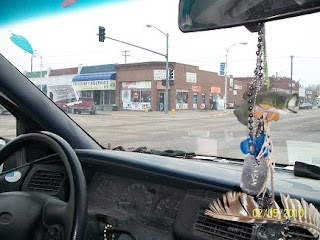