A Few Pieces of Art, Some Journaling Pages and A Bit of Chatter From Moi!

I've been spending WAY too much time over at FBGames and not getting near enough art created.
I must change that!
Someone really should do the dishes sometime as well.
The kitties at the top of the picture row today were drawn about three hours ago. They are headed to London under the presumption they were drawn on the 10th of October (like the rest of the kitties in this post!). London knows they were not drawn on the 10th though, so all is well. 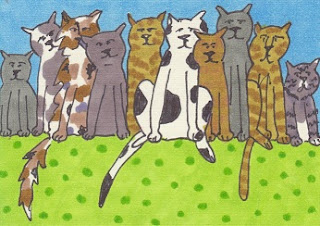 10 Kitties for Joss
ATC
16 October 2010
Markers on recycled cardstock.
I sat in the livingroom with my eversharp and black sharpie pen in my comfy pink chair, shooting the shit with my brother while I cranked this one out. He said he couldn't draw cat if his life depended on it. I think he's mistaken! Anyone can draw cats! I don't usually do a lot of drawing in the livingroom. I colored it in here in front of the pc where the tubs of markers live.
At the moment Joe Walsh is singing about Turning to Stone.... He really doesn't know how to sing! I really like the drum parts of Turn to Stone. It's an alright song, even if Joe can't sing! 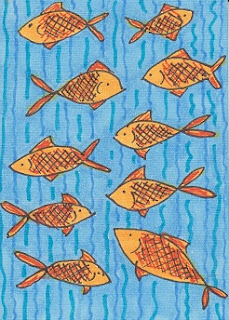 10 Gold Fishes
ATC
10 October 2010
Markers on recycled cardstock.
There was a 10-10-10 athon over at AFA (there's still a link up there in the left hand corner) over the weekend. Well, no, actually it was only on Sunday, 10-10-10. The theme was, what else, but 10. Fishes made it into the athon. They are not, however, swimming away from Kansas at this point cause I didn't trade the 10 Gold Fishes. Perhaps some other time? 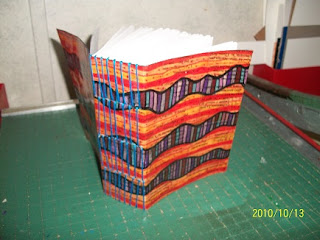 Hmmmm....this isn't an ATC. This is a book I sewed together on the 13th. It is approx. 4 x 6 inches, 2 inches thick. The cover is made with fabric paper colored with sharpies and then covered with clear packing tape. Sewn with dark turquoise colored embroidery thread.
I went to Wally World on Tuesday to get some new needles. Never did find my book sewing needle that went missing....
This book has 15 signatures of 5 folios. Not sure about the math of how many pages total. You figure it out. You are more likely to get it right than I am! I really need to figure out how to calculate just how many total pages there are in my little books...it's a little important to be able to tell folks how many pages they're getting....If someone wants to break that process down for me, please feel free. I would appreciate it!
I sewed together three more little books since I sewed this one. Those pictures must be on the camera still cause I couldn't find them while hunting down pictures for this post.
I haven't shown you all my junque journal. I haven't worked in my JJ for awhile either....Need to do something with the pages I've gessoed before adding anymore stuff to it. 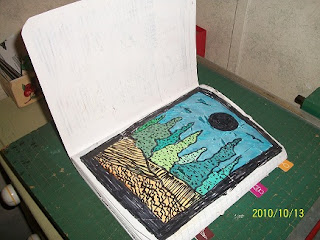 First page in the book. I gessoed the inside of the front cover to obliterate the charts that were printed there. I didn't see a need to keep those conversion charts around. I put magazine pictures on the first page and them promptly obliterated them with gesso as well. Covered them completely! Then I waited for better than a week before taking the markers to that page and ending up with that tree scene you see here.
Lesson learned: Markers and gesso don't really play all that great together. If I want my markers to last longer, I shouldn't use them on gesso.
I also learned that if you cover magazine pictures with gesso, no matter how thick you put the gesso on, you can still tell there are other papers glued under it! If you're after that affect, go for it! If you'd rather your paper be smooth, don't bother. I couldn't tell you what pictures are under that gesso....not a clue! 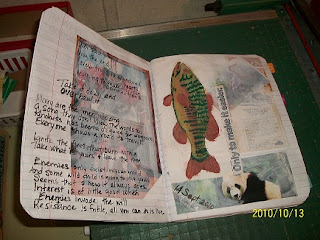 Gessoing the inside of the front cover has given the cover a warp. I'm uncertain how I will deal with that warping in the future...This spread isn't done. I need to rewrite the poetry cause it isn't centered on that page like I want it at all! I love love love how the fish turned out! Magazine pictures gessoed over. I didn't gesso over the panda. I recolored the fish to my own liking with markers.
The title of the poem is on the fish side of the spread....Only to Make it Easier. I write a lot of acrostic poetry lately. This is one of them. It was written on 14 September 2010 (just as the date on the fish page indicates).
Only To Make It Easier
Over there...
near the end,
lovers frolic in abandoned hearts,
yearning to make the correct connections.
Take it down and
overhaul it.
Merry are the men who sing
a song they don't know the words to.
Kindness has been a disguise for disgrace.
Everyone knows a road to travel.
Ignite the fires that burn within.
Take what is yours and leave the rest.
Enemies only exist in your mind
and some wild child is going to love you.
Seems that is how it always goes.
Interest is of little good when
enemies invade the real.
Resistance is futile; all you can do is live.
14 September 2010
An acrostic poem is a poem written using the letters of a word or phrase as the first letter of each line. When I frequented the poetry site (I've not been there to actively particpate in better than two years) I was known as the Queen of the Acrostic. I won a few awards on the site for my acrostics. Some of them have very little to say about the quote from which they're written and some of them stay on topic. It's just whatever the muse wants to do at any given time. Just like it is with art. Whatever the muse wants, the muse gets! 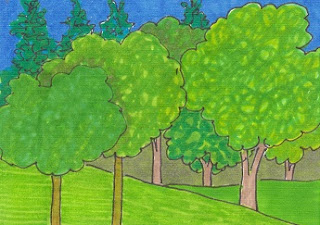 Ten Tree Forest
ATC
10 October 2010
Markers on recycled cardstock.
These are not traveling anywhere either. No trades for this forest. 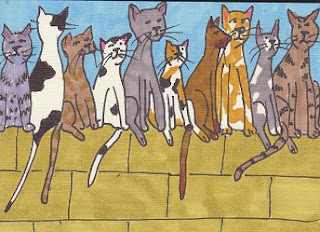 Ten Little Kittens
ATC
10 October 2010
Markers on recycled cardstock.
This batch of kitties is headed to The Netherlands. 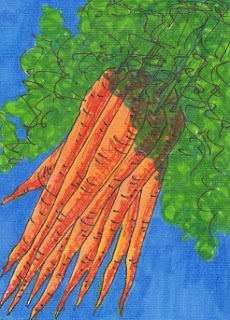 10 Carrots
ATC
10 October 2010
Markers on recycled cardstock.
Carrots are going to Minnesota, USA
I was really surprised when these carrots were asked for right off the bat! They aren't the best drawn carrots...least I don't think they are. But it isn't for me to decide the worthiness of any of my own drawings. I'm a terrible judge of their quality! 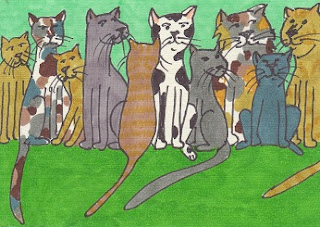 In The Green Room
ATC
10 October 2010
Markers on recycled cardstock.
These kitties are going to Georgia, USA. 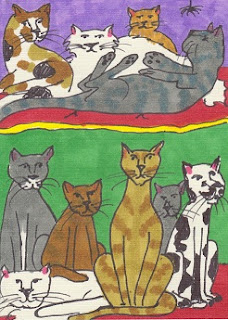 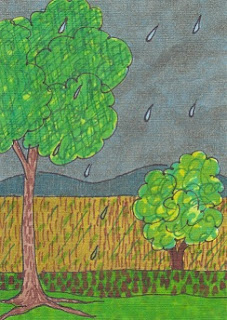 10 Drops of Rain
ATC
10 October 2010
Markers on recycled cardstock.
It was raining on Sunday. And it only rained about 10 drops of rain on Sunday.
This one is going to Michigan, USA.
I traded 12 of the fingerpainting cards from the fingerpainting ATCs post a few posts back. In that trade are another 5 ATCs chosen from my availables. That's a 17 for 17 trade! I'm looking forward to my zoo of origami critters that will be coming in trade for those fingerpaintings and drawings that headed to Singapore!
And I leave you with Little Miss Annabel!
Be good to one another! It matters!
I'll be back another day with another post to either bore you to tears or excite you no end.