More ART for your enjoyment. I'm not sure any of this can really be called FINE ART or even good art, but art it is~! 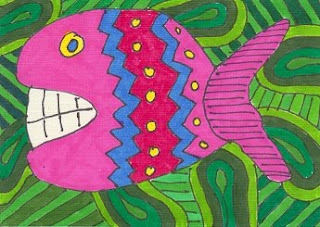 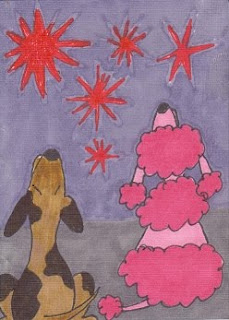 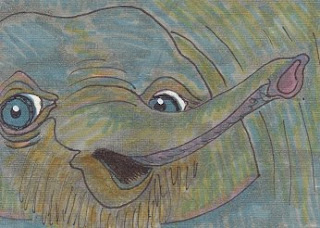 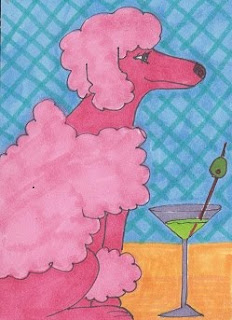 Pink Poodle with Martini
ATC
29 May 2010
365 Project #151
Markers on recycled cardstock.
The next four pieces are 4 x 6 inch postcards with only white gesso on thier backsides. They're made from food packaging chipboard and painted. All original artwork right out of my head! 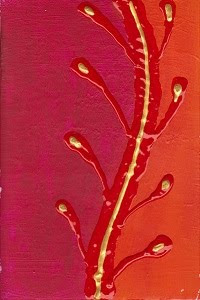 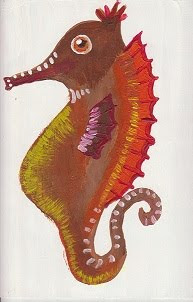 Seahorse
Postcard
May 2010
Acrylics and Gesso. 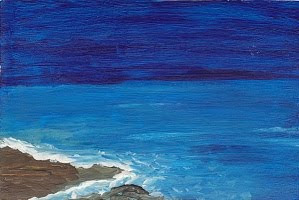 Seascape One
Postcard
May 2010
Acrylics and Gesso 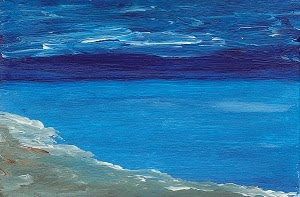 Seascape Two
Postcard
May 2010
Acrylic and Gesso
I've been going at the Fish Picture 3 like gangbusters for the last few days.
One, maybe two more layers of seafloor and then I'll start attaching all the things that will make it look like an undewater seascape complete with fishes. That makes it sound like this canvas is almost done, but in reality, I still have a lot of work to do in making the sea creatures, plants and what have you for this large canvas! 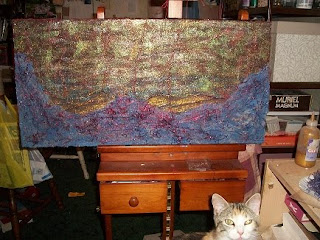 The seafloor is actually a bit more on the blue side than this picture shows on my pc. The purple easter grass turned out to be a not-so-good idea afterall and I cut most of it off with the scissors after the joint compound dried. Then I slathered on some red glitter glue which give it a bit of purplish tone. I'll add some sea plants before I add the next layer of seafloor.
That's Miss Lola (the terrorist) peeking up from the bottom of the picture. 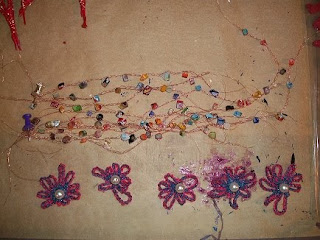 The strands at the top of this picture are milliflorie (? spelling) beads crocheted onto copperwire salvaged from a VCR (if memory serves me correctly). Some of these strands will go on before the next layer of seafloor. I've been making more of these this evening.
The Pink and blue things are sea creatures out of my imagination. Crochet cotton crocheted into flower shapes, painted with blue glitter paint and a fake pearl plopped down in the center of them.
I will be making more of these in different shapes and colors for this canvas too. 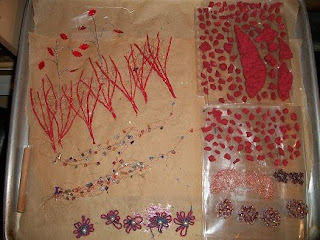 Here's a shot of all the elements I made in the last few days. Except for the fan corals which you have already seen. I dragged them out to see how much stuff I had made for the seafloor. there ain't near enough of anything there to cover like I want. 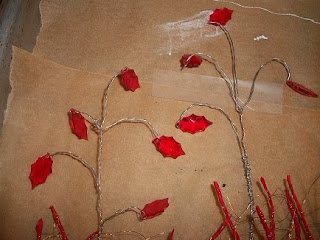 Red acrylic beads and silver florist wire. I still have one more of these to make. I have only three more leaf beads to work with and I might make three more with only one leaf. I really haven't decided on this yet. 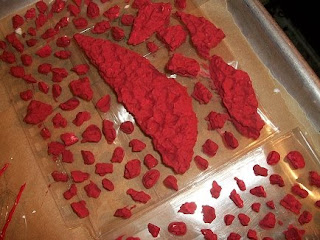 Rocks. These are actually chunks of styrofoam painted a barn red color with cheap acrylics. They'll get a few more coats of color to make them more rock-like. I need a lot more rocks for this picture than I have here. I'm going to have to find some more styrofoam to make rocks out of.
These things were a pain in my neck before I painted them. Static electricity made them terribly hard to work with. They stuck to EVERYTHING!
The next set of rocks will not be this color as there is no more of this color. The bottle of paint was almost dried up. Had big bugers in it so when I was done with these rocks, I tossed it out. 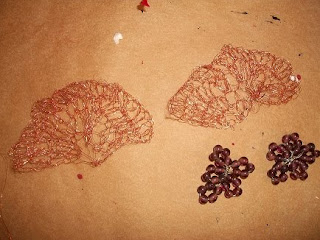 More corals from my imagination. The tops ones are about 2 1/2 inches across. Crocheted copperwire. The bottom ones are purple glass beads strung on silver florists wire and shaped. I'll be making more of each of these. I'll probably make other wire and bead creatures as well. 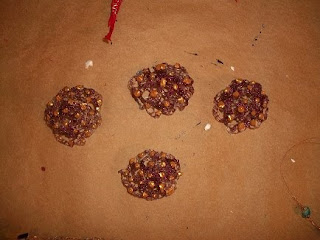 These are my version of sea urchins. They're crocheted monofilament (aka fishing line) with rose colored glitter paint (looks purple on my monitor) and gold dimensional paint. these are about an inch and a half across. I'll be making more of these but only smaller than these and I'll probably make a boatload of them in different colors as well. 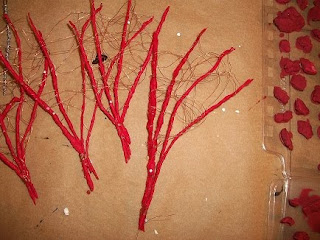 Another look at the fan coral. It's made from red tissue paper, fabric stiffener and copperwire to hold it all together.
I was sitting in the livingroom talking to Susan earlier and an idea hit me on how to make sea anenomes. I'll show you all those tomorrow. They should be dry by then. I have another idea in my head about other anenomes that will be larger than those I made today. Gotta experiment with those though. Not sure that will work out. If it does work out OK, you'll see those tomorrow too.
Behave yourselves! Go get your hugs! I need more hugs.....
Peace
831
Posted by Donna at 12:54 AM