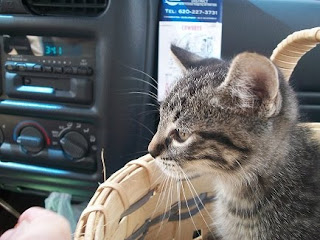 It has hailed three times today. At 7 this morning it poured down rain in my neck of the woods and 23 miles to the north they had a hail storm with winds strong enough to knock limbs off the trees. The hail did no favors to the milo field at the edge of Phillipsburg.
My mother called me at 11 this morning to ask if I'd like to return this cat: That cat should be down here! I HATE this stupid picture adding file or whatever the hell it is! Why can't the pictures go where I tell them to?
Sorry. This cat^that cat is Charlie. He came to live with my mother last Saturday. Miss Kitty is his mama. She belongs to my youngest son RW. Charlie didn't work out at Grandma's house cause Charlie refused to use the litter pan. First thing that kitten did when we got him back to RW's house was to use the litter pan. Grandma wasn't impressed. He stayed at RW's house. Grandma had no other issues with Charlie. He's a loveable, playful, happy, purring kitten and cute as he can be! But. Yeah, there's always a but ......he pooped in the wrong place many more times than only once and Grandma just couldn't keep up with him on that issue. RW was quite fine with this. Sometimes kittens don't work out. He's already got another of Charlie's littermates, Ozzie so what's another?  The grandkids were tickled pink to have Charlie back.
After leaving Charlie at RW's house we went to my sister Elaine's house for supper. It was around 5ish when we arrived at Elaine's. The clouds started moving in and the weather radio was abuzz.
Elaine hadn't even started supper when we got there. I went next door to our sister Linda's house to get some shoes she had for me while supper was cooking. Linda gave me three new pairs of shoes! I'm gonna trash the blue crocs with the red paint on them. They are getting mighty thin in the soles!
Elaine made greenbeans, new potatoes and corn on the cob with ham. She also sliced some cucumbers and made a mayonaise sauce to put on the cukes. When we all sat down to supper, Linda's husband, Terry poured mayonaisse sauce all over his beans, potatoes and ham. He's pouring and saying, "Oh, I love gravy!" We gave him shit about it all through the meal! It was hilarious. It was also a very honest mistake! He ate everything on his plate. The mayonaise sauce was good, it wouldn't have tasted bad on the veggies. And it did look like white gravy.
It started to rain while we were eating. The weather radio abuzz the whole while telling us where the storms were headed. Phillipsburg was being pelted with rain for a second time this day. Mom and I headed back home after desert of brownies and vanilla ice cream. I skipped the ice cream. I'm not overly fond of ice cream.
We left Elaine and Monty's house around 7pm. I didn't drag the camera out till we just passed the county line, about 10 miles north of Stockton. This field is full of rain from this morning when it hailed in Phillipsburg. The clouds aren't looking too nice either. 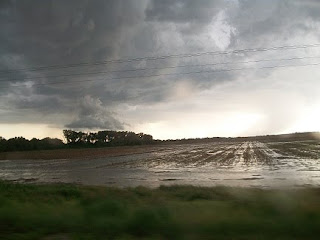 We had ran out of the rain that was falling Phillipsburg when we left there and heading into more rain a few miles down the road. 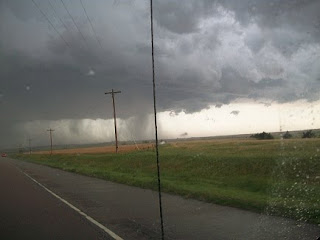 There it is falling out of the sky! And the sun shining right behind us. 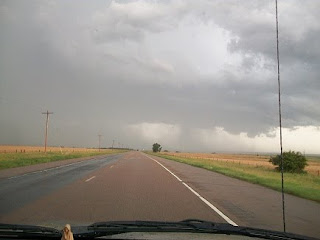 I wanted to show you the wheatfields. Harvest is so very close at hand. One of these storms can ruin a wheatfield in a matter of minutes, depending on just what is falling from the sky! The rain in the distance here is mixed with hail. Mostly pea size, but some quarter, nickle and golf ball sizes were mentioned on the scanner later in the evening. this storm is coming from the southwest headed northeast. It changes directions and moves more easterly or more northerly and then heads northeast again. It wrecked havoc on the highway. There were three poker runs this afternoon. Poker runs involve motorcycles and charities...lots of motocycles. A band of them got caught in this storm pictured as it moved toward the north. Two wrecked, laid their bikes over on their sides, not seriously injured thankfully, but mighty sore from road rash...one gets terrible road rash you scoot down it on your skin! There were a lot of wet people out there! They got caught, not only in rain, but POURING RAIN and HAIL to top it all off....oh and lets not forget the wind. This was around 9ish the motorcycles got into trouble.
It was around that time that my mother came to my house.....this isnt right. RW, Lue and the boys all showed up before the motorcycle business. They were on their way to Stockton from Phillipsburg on 183 and drove through the storm that caught the cyclists off guard. It was after they had headed to Hays after it hailed here. Pea size stuff...LOADS of it! RW ran across the back yard in it to get his van so we could all go over to Susan's house. We didnt' want to stay at my house! I live in a trailerhouse! Not good in a wind storm! We got pelted with hailstones and drenched to the skin going from the front door to the van sitting in the lower drive! Poor Fred had to hoof it to Susan's house. He got in her house before the rest of us did though. That storm subsided and RW and Lue went off to Hays. 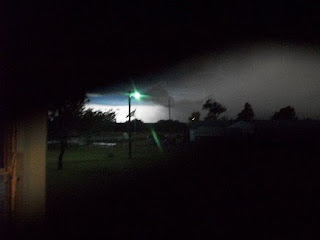 Half hour later Ma comes to my house with her scanner in tow saying the National Weather Bureau has spotted a tornado on the ground 3 miles west of Stockton. The spotters can't see this tornado cause it's wrapped in rain. They blow the sirens and we haul ass to the basement at Susan's. My camera doesn't take good dark pictures but that's the cloud with the tornado in it approaching Stockton. The green light is the yard light between my house and Susan's.
It is an ordeal to get into Susan's basement. I'll not tell you how that's done though cause it's actually a hidden room. If you don't know how to get in the basement, it would take you a long time to figure it out even if you were pretty smart! But it is an ordeal to get down there and poor Evelyn she doesn't move too well, especially on stairs and the basement stairs are kinda steep! Fred won't go down them! He'd rather be blown away by the tornados. While we were getting into the basement, I was looking out the backdoor to see what the clouds were doing. The wind was blowing about 60 miles per hour. The trees bending low! The rain coming down horizontally and various sized hail balls falling as well. I'm looking out the window and I could see headlights pulling into Mom's east driveway. I'm thinking it was Sammy and his brood. It was them but it wasn't only them!
They all come hauling into the house out of the weather and headed for the basement. The weather was WICKED outside. There's a tornado in that rain somewhere! Least that's what radar is telling us! Come to find out these three extra people had crashed their car into Ma's ditch and it was kinda stuck in the ditch and on the highway too? I really didn't catch the conversation of how they came to be there. We all thought they were with Sam and Shannon! We thought they were friends of Cheston's. No, they'd been out chasing the storm! LOL...Been there, done that. They were all fine as far as I could tell. Two boys and a girl....16-17 yrs old. They were pleased as punch to be in out of the weather. No clue who they are except that they live in Plainville and one of them is named Brandon. I'm glad we could give them refuge. They seemed like nice kids and they laughed at my jokes! I just told them they could have fallen in with a worse lot than us. I really am glad we could give them refuge. It really was wicked outside!
This storm that had the tornado in it took its sweet old time passing through! The scanner had no reports of the tornado ever hitting anything so it must of missed town. Susan said she saw funnels on the ground across the highway from the house when she went upstairs out of the basement to put some pants on (she was in her jammies). I think she saw cloud tails, but I wasn't there and it was, like I said, WICKED outside! Very well could have been a tornado on the other side of the highway!
The electricity had gone off before they blew the siren in town. We are a mile and a half east of town and we can hear that siren if the wind is right. Electricity was off from about 9:30 till 11 or little after.
I came home as soon as the rain stopped just after the electricity came back on. There was still some nice lightning happening to the east as the storm moved away from us so I decided to take the camera out behind the burnt house and see if I could capture some lightning on the camera. It's hard to take lightning pictures and get good ones. I got six good ones and 45 black ones. I really don't know how many bad lightning pictures there were. I didn't count those. Here's the good ones though: 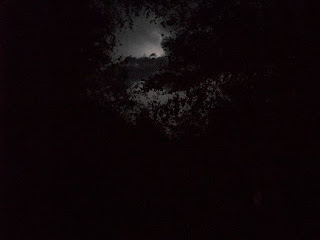 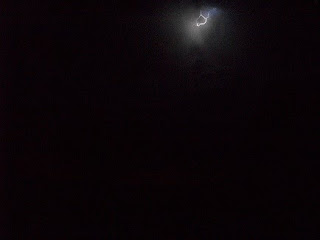 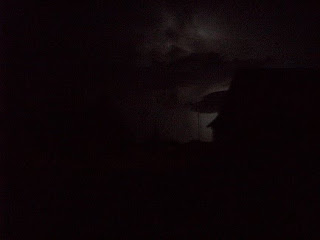 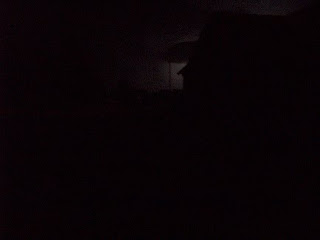 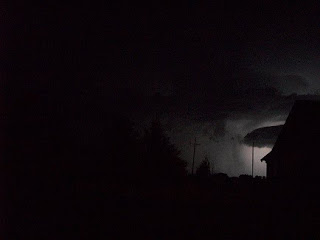 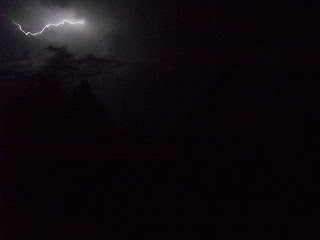 And not all of them are all that great!
That concludes the rain tales. We survived even though it did appear as though there could be questions about that! No true damage done that I'm aware of. I've had a rather major fix of major storms for one day, I can tell you that!
Get your hugs! It is days like this one that assure me hugs are essential!
Don't forget the kisses!
Peace
831
Posted by Donna at 12:24 AM

oh my goodness it's all happening in your neck of the woods, with spectacular photos too. that one with the lightning is amazing, stay safe and warm.