This Is Not Art---At Least Not To Me

I have only a purple giraffe to offer as art and it is debateable as to whether this is art or not. You decide. 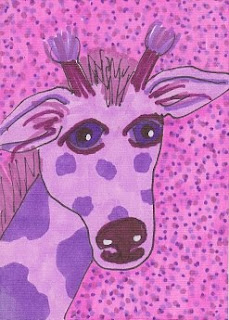 Annie's Purple Giraffe
ATC
16 June 2010
Markers on recycled cardstock.
This is Annie's Giraffe cause Annie seen a purple giraffe and I drew this one from that inspiration. Annie's giraffe is still on the scanner bed...I scanned him days ago! There is no other art to show.
I have started another canvas but haven't taken pictures of the progress. Still haven't decided just what this canvas is all about! It's tones of browns right now....I'm thinking trout, rainbow trout to give it some color but that isn't written in stone anywhere. You all will see this newest canvas when I decide just what the hell I'm doing with it!
I've made three postcards but they are not scanned as of yet.
The last post was titled Rain, Rain Go Away, Come Again Another Day.
Well obviously mother nature cares not of my requests cause she dumped on us big time on Sunday evening.
Another trip next door to get away from the weather. They didn't blow the sirens on Sunday evening but it did blow, hail, rain and thunder. Let's not forget that wicked lightning either.
The pictures of my fence attest to two days running of high wind. I think the fence is a goner. We'll see what the insurance adjuster has to say when he shows up tomorrow to take a look at her. 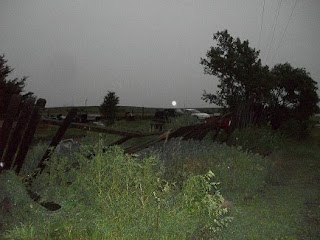 I'm afraid my pictures aren't the greatest. The light wasn't all that good, it was still sprinkling pretty heavy when I took these pictures on Sunday evening. This is looking at the fence from the highway side. That is my weed bed growing beside the fence. Wildflowers, tumbleweeds, sunflowers, sandburrs, ect, ect. My weed bed! Well it's squished now cause that damned fence fell over on it! This is the middle of the fence. There's a redbud tree on the highway side of the fence and an elm tree on the patio side of the fence. You can see both trees in this picture. They are the ONLY reason this fence isn't scattered in the field across the highway! 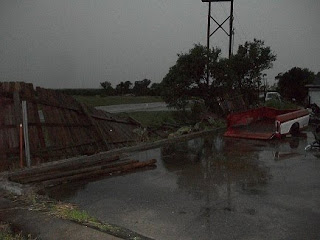 This is looking at the fence from the patio side. There are the elm tree and the redbud in front of the pickup bed. That pickup bed wasn't sitting where it is in this picture before the storms came along. It was sitting on the trailer frame a few feet from where it's sitting now. You can see the trailer hitch at the very edge of the right hand side of this picture.
The fence runs from the edge of the white building at the top of this picture about 110 feet east...the length of the patio. Not much of the fence is still standing. There's another picture farther down of the fence.
My brother started putting the fence back together this afternoon. He'd gotten a couple of panels put back up when I told him to stop cause the insurance adjuster would be here tomorrow to take a look at it. If Sammy put it all back together today, the insurance adjuster would say, "That fence looks perfectly fine." My brother is a good carpenter! And he would have had it all put back together again this afternoon as well. 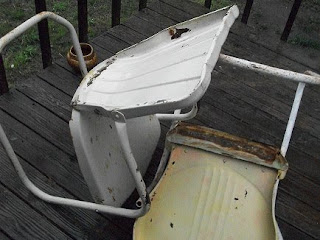 The two metal chairs on the front porch ended up tangled together after the strong winds last night. 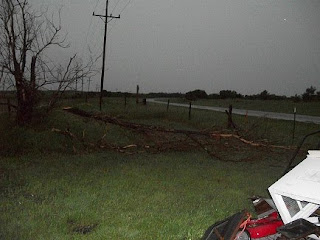 This is the east end of my property. It comes to a point at this end and that is what I call this spot. The Point. That tree is dead as a door knob and Sammy and I had discussed cutting it down. Now that the largest branch it had is now laying on the ground we've decided to leave that tree be. The part that fell will be cut up for firewood and used in the garage this winter. So it wasn't all bad that this storm did. 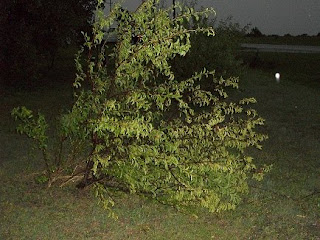 This picture and the next are of plum trees. The one above is half dead now. The wind pushed it over and broke it right at ground level. The leaves are all wilted on the part that is leaning. I don't think we will be getting any plums from this one this year! 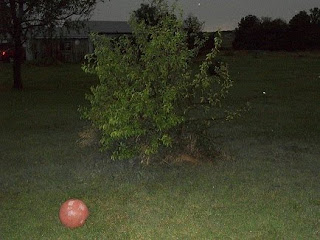 This plum tree is north of the other plum tree shown. That's a basketball laying by it...gives you a bit of sense on its size. It's not much taller than I am....less than six feet. Why the wind didn't know this one over I don't know. The wind had to go through this one to get to the other one which did get knocked over. 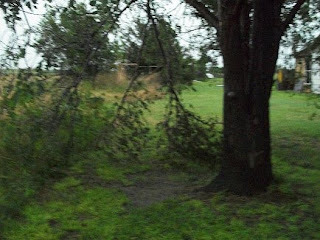 Only one branch in the yard was down. A terrible picture of it but you get the idea. The branch didn't come out of the tree completely but it is broken and will have to be removed. 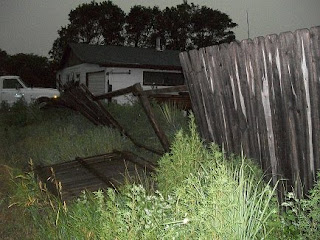 Another picture of the fence. This is the end that my brother fixed this afternoon. That panel isn't laying on the ground anymore. 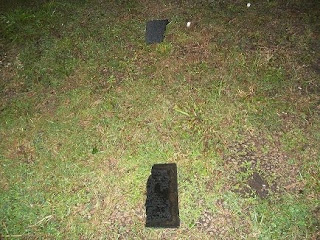 Shingles from the roof of the burnt house. Insurance won't cover the damage to the burnt house I don't believe. I'll ask the adjuster tomorrow but I'm pretty sure he's gonna say no to that one. 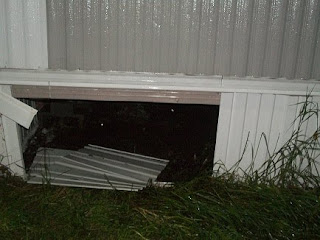 Skirting torn off by the wind. Insurance might cover this.... 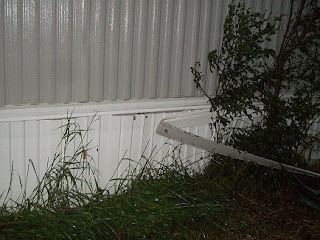 More damage to the skirting on my house. 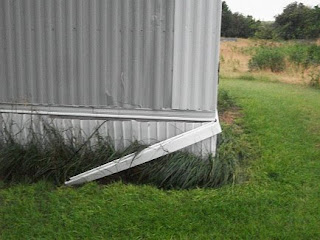 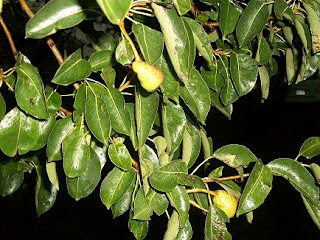 The pear trees fared quite well in the storm. They have the house to protect them though. 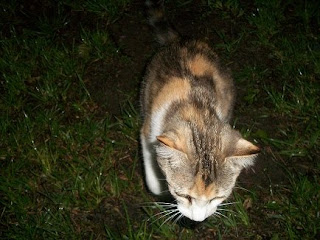 And here's Miss Lola, who was outside the whole of last night's storm. She's walking from the pear trees up to the front porch in this picture. She was quite happy to see me when I came home from next door when the storm ended.
As you can tell from the pictures of the skirting, I live in a mobile home and mobile homes are a terrible place to stay in a wind storm! So I don't stay! I go next door to my sister's house where there's a basement!
Thankfully we didn't go to the basement on Sunday night. Weather spotters reported rotation in the clouds but the sirens were never blown in town.  That is our indicator to get to the basement....Storms most always come from the west and if they've blown the siren in town, it's headed for us next.
But we all survived the ordeal once again!
I do love me a good old fashioned thunderstorm but I prefer them in small doses. Three MAJOR storms in two days time are spreading it a little thick!
No storms today though, not even a chance!
Go get your hugs!
I need to do some art!
Peace
831
Posted by Donna at 8:15 PM