Here are your pictures for the day. We will go with some old ATCs that have been traded. 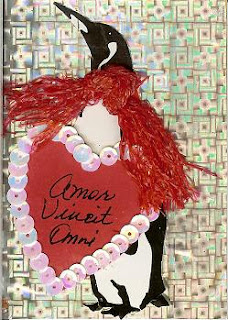 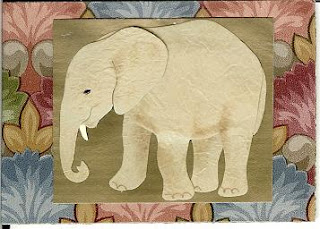 Baby Elephant-This one is kinda special in that the little elephant used to reside in one of my scrapbooks before the house burned. It survived the fire. The scrapbook it was in did not. 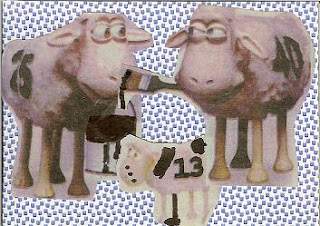 My sister Susan made this ATC. I traded it for her. 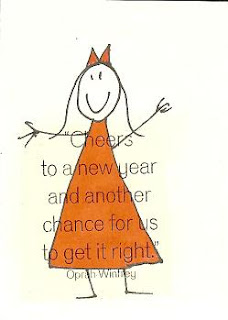 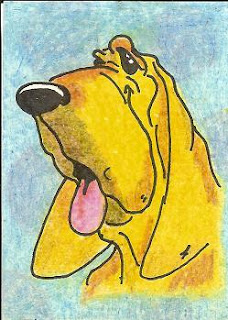 Ernest- This is one of ten dogs I drew up as ATCs. It was only nine to begin with. I traded all nine of them and then had a request for the wiener dog again so I did him again to trade.

I Love Mondays, unlike some folks who think of Monday as a the dreaded first day of the work week. The weekend passed with little fanfare. That's a good thing! I'm sitting here with my morning coffee and a cat atop the monitor to keep me company. And now that I have said that, Miss Blue has decided she will not keep me company afterall. She's headed to the painting table and is curling up in a ball underneath it. That's alright though cause we have Travis Tritt crooning to us this morning as well.


I've actually been up for hours now. It's going on 7a.m. I've been up since a little after 3. I need to get those Halloween Chunky pages done sometime this week. That WILL happen though! Yes! It will!! I finished all the fronts for the eight that were needed for the swap and got four backs done already this morning. One page is all put together with its danglies attached. We are on a roll this morning! Coming along nicely!


I really haven't much to talk about this morning. I went to bed about 4:30 yesterday afternoon. Had a headache from hell. Hurt like a big dog. I have to go to Plainville this morning. Later this morning. I don't think the lab techs are at the hospital just yet. I need to have some blood drawn so the oncologist can decide if I need a phlebotomy this month. I do need one though. I know that from the way I've been feeling for the last couple weeks. I shoudn't put it off going to get blood drawn. I'm supposed to do it every month! I didn't last month. The hemocrit numbers are probably up in the 50s somewhere. Pretty high I'm betting.


Susan called me at a little before 5 this morning asking if I wanted to come for some hot tea. I already had a cup of coffee in front of me and I was working on my chunky pages so I declined that offer. It's also quite chilly this morning and I really didn't want to walk across the field to her house next door. I will go see her pretty soon though as I've drank a whole pot of coffee this morning and some hot tea sounds good now.


I have some scanning to do today. Lots of ATCs and a few chunky pages along with another little book of collage that needs to be sent out soon. I'll show you all some pictures tomorrow of the stuff I'll be scanning later today.


Come this evening I'll be headed to town to sit with the girls. I'll take some art supplies with me to get my zentangle ATCs done for Maryellen's swap. I have four of them to make. Now that I know she likes the color orange, I'll make her one with orange on it for hosting the swap. I haven't decided yet what color the other three will be.


We will see what the week holds from here. I'm hoping for a roadtrip invitation but that too remains to be seen beings I declined the invite last week. What WAS I thinking? A roadtrip woud be a fantastic diversion. I gotta get those Halloween pages done though before I can go anywhere!


I am reading a new book. New to me anyway. I took it out of the bookshelf on the west wall in my bedroom. I can't for the life of me remember what the heck the name of it is at this moment. It's by Belva Plain though, I do know that. Black Bayou? maybe? I really can't place the title correctly at this moment in time and why I mentioned it without knowing the title for sure, I can't tell you that either!

Creamed Corn
Corn is crushed off the cob
remaining rather lumpy.
Everyone likes theirs with cream
and butter.
Maybe you don't
.Either way it's damn good stuff.

Corn farmers live in the Midwest
over and about Nebraska.
Remain in your seats.
Nebraska isn't that exciting~!
26 April 06

My apologies to any Nebraskans out there. I've been to Nebraska many times and every time I was there, I had an excellent time!
You all be good to one another today! I'll be back again to yak at you all!
Peace
831
Posted by Donna at 6:50 AM