It Must Be Wednesday! 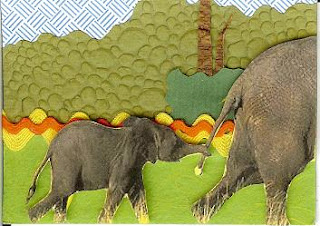 I wish I were a little girl again some days. To have Mama to lead the way...
Mama is just down the road but I've grown from that little girl I wish to be into a woman I don't always understand....
I haven't slept much in the last 24 hours so please bear with me if none of this post makes sense! Sometimes even I don't know what the hell I am talking about and sleep deprivation only enhances the nonsense.


Art is not high on my priority list today so we will go with poetry instead. I wrote some raw poetry just a few moments ago but I will not share that with you as it needs to be honed to make any sense to the reader. Even I reading it, and I wrote it!, I am uncertain just what it is saying! So poetry shared today will be old stuff that has been honed to a fine edge and even possibly awarded. I haven't decided just yet which poem you'll be reading today.


My art muse has been taken over with the poetry muse apparently. I have Halloween Chunky pages that must be done before long. I worked on them some last night when I couldn't sleep. I got backgrounds done on 10 pages and gave up for the night as the muse was very elusive! I wish she would come back with bells on and ready to rock and roll on the art that I owe to others at this point. There are three cat portraits that must be done sometime this week and I keep forgetting to send myself an email with the pictures attached so I can go to the library to print them out. My printer refuses to talk to my computer for some unknown reason. The word processor has the same affliction. The scanner though is working like a champ and that is a good thing! I will have to force that muse out of her vacation and make her do what she is supposed to do where art is concerned!


I had an offer for a roadtrip yesterday. That call came in about 7:30 last night. How I wish I could have taken the man up on his offer but that was not be. I have a bald tire on the van, no funds for a roadtrip and yesterday my old body was in rebel mode big time! Today it is not much better because I've had only two hours of sleep since that call woke me up. I did go check on a tire for the van but the funds are not there at the moment to do anything about that bald tire. So looks like I'll be sticking close to home where someone can rescue me if it blows! And it WILL blow when I least expect it!


Someone needs to clean that van out before another roadtrip can take place anyway. There is still the same old crap in that van that was there when I took the last roadtrip! The man gave me much grief about the condition of the van but it's not his van and he really shouldn't tell me how to deal with my own vehicle when he cares less about maintaining it himself. He thinks I know how to do routine maintenance and the more I tell him I do not know how to do routine maintenance the more he gives me grief. It is a vicious cycle! Cleaning the van is routine maintenance and I do know how to clean the van. I just choose not to. It should not matter to him how clean the inside of that van is, but it does matter to him. Cause his own vehicle looks like it did when it came off the showroom floor. His neatness drives me crazy sometimes! And my trollness drives him crazy! Opposites do attract apparently! I will get the gumption up to clean that van before I go on another roadtrip. I might have to do it immediately before that roadtrip cause I never know when the trips will occur. Out of the blue the invites come! But it will be cleaned out, maybe not vaccuumed, but it will be cleaned of all the crap I'm carrying around in there now. I'll even wash all the windows in the inside to get rid of the dog nose prints that adorn all the back windows! That will please the man! I think.


I'm off to find you a poem to read. I would do that the easy way, but the software for the word processor will not even open old files. Says I need to reinstall Works. I've no clue how to that! I forgot to ask DIL this afternoon when she was here how that can be done. She's the computer wiz, not me! I am the computer dummy! Computer Dummy Extraordinaire!


Here is your poem for the day. It was written in early 2007 and awarded The Tapestry of Beauty Award over at New Horizons on Yuku.

On treks far from the comfort
of home base, we whiled away hours
in years gone astray.
We whiled away bliss in darkened rooms,
banished the sunshine
and left only gloom to light our hearts.

Friendship that flourished in brilliance
was drowned in a black liquid soup.
We tried to entrust that precious feeling of hope
to hearts that couldn't hold such truths.

In chains we were bound,
neither of us with the key
to unlock the shackles
we'd placed on the other
over those many years spent
chasing rainbows in nightmares.

Disillusioned we grew
when the thrills faded away.
Sadness covering eyes once
sparkling with adventures yet to be.
We grew weary of chained hearts
that couldn't bleed red.
Blues became the colors of our worlds.

Eyes looking outward at a distant place,
neither of us seeing the same view.
I needed smiles in the brightness of day.
You needed flesh to show you the way.

My sun was obscured by your charity.
Your charity was consumed by my sun.
We smoldered for years in a grey cloud of lust,
never finding the painlessness of love's embrace.

I wanted to run far, far away from the confines
of what I thought was graciousness.
And when I walked away for many days
you always called me back to arms that held me for awhile.
You called me back to sustain our worship.

We dedicated and we justified,
seldom accepting the giving as gifts.
Each little gesture was a nail in a coffin.
Each kiss, resin to seal the seams.
Each day an eternity till we gave again.
Each night a year filled with sentimental tears.

I fear love is a synonym for pain.
For it left behind despair when love was not savored
in the hurried moments stolen from our lives.

My sun obscured your charity.
Your charity consumed my sun.
Kindnesses rendered in the waning hours
were but a feeble attempt to
regain that which was never ours to own.