Good Morning Good People!
I haven't blogged for a few days. No real reason for that other than I didn't have much nice to say. Ma always said, "If you've nothing nice to say, it's best to keep your mouth shut!" So that's is what I have been doing!
I hope the world is being good to you all.
I won't complain too much actually. Life could be a lot worse. So I count my blessings and go from there.
I thought I'd show you all some ATCs and a Chunky Page that have been traded today. I am taking part in the Collage-A-Thon over at AFA this weekend. It runs till 11:59 PM Sunday. I have all day still to make a few more cards. These you see here are the ones I traded today and yesterday. There's a couple missing cause I seem to have hid them from myself in the files on this wretched machine. I swear it is smarter than I am some days! I looked for the missing ones but I'll be darned if I know where they are! 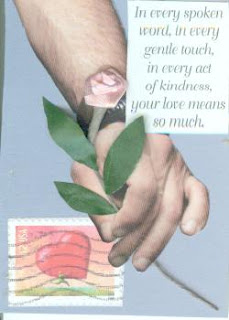 This first one is called "Every Spoken Word". I found that man's hand on the cover of a Fast Company magazine. The postage stamp came on a letter that contained ATCs I had traded for at point in time. That's a fabric rose with fabric leaves in the hand and a quote from an old calendar rounds it out. It will be headed to Finland come Monday morning when the mail goes out. 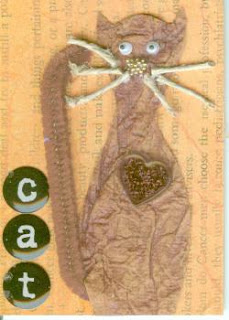 Brown Cat is headed to California. He was made from handmade paper, pipe cleaner, googly eyes, twine for his whiskers and microbeads for his nose. The CAT are alphabet stickers. My sister Jeanny gave me the plastic heart that is attached to his belly. It used to be a button till I cut off the shank and filed it smooth. He is attached to a piece of recycled chipboard covered with text from an astrology book and orange tissue paper. 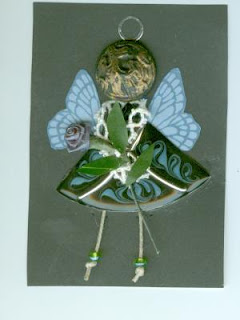 This one is headed to California as well but not the same spot as the previous one. I call it Blue Angel. She is made from an enameled metal earring that I removed the back from, another button with the shank removed and filed smooth, a sequin for her halo, twine for her little legs, a lenght of tatting for her arms, she holds a fabric rose with fabric leaves and she has glass seed beads for feet. She is attached to black construction paper which is attached to recycled chipboard. 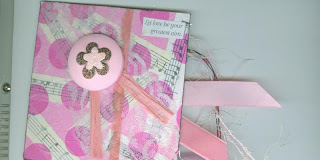 This is the front of Make Love. It reads Let Love Be Your Greatest Aim. It is going to Finland along with the other card I've shown you. There are pink bunnies going to Finland with these as well but I didn't show you them...though I should have, they are awfully cute! It was hard to let them go! Maybe I will show you them tomorrow...Can't guarantee it though. This chunky page was made using the following: pink cardstock with sheet music on top of it and tissue paper on top of the sheet music. There is a bit of lace, some handmade paper, raffia ribbon, and a wooden medallion painted pink with a glittery sticker stuck to the middle of it. The edges are adorned with various fibers, a small metal key charm and velvet ribbon. 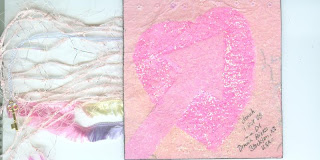 I still haven't got the van fixed and don't see that happening anytime soon. The water leak has been figured out but not fixed just yet. The hardware store closed early on Saturday and we were unable to get the supplies needed to fix the hose on the back of the washing machine that is causing the troubles with the wet floor. That will be fixed on Monday when RJ comes along to do it. He's a good son!
RW showed up this afternoon to climb up on the roof to pour some tar up there where we thought the water was leaking into the house from. There was no need to do that so I got the chance to visit with him and Lou and all their younguns. I think I've finally figured out which kid is which! Never could keep those four boys straight. Especially the two middle ones. It was fun to have them all here running all over the yard like little boys will do. Gage found me a really cool wheel bug for my insect collection. Gabe is the adventurer of the group. He has to look in every nook and cranny around! He's an inquisitive six year old! Grant is the five year old clown of the four. He found the three wheeled bike in the burned house and asked if they could play with it. Not a problem! Play away, boys! Gavin is the little guy at only 2 yrs old. He let me carry him part of the way from Susan's house. I simply couldn't carry him any farther than I did. He held my hand the rest of the way back to my house while he and RW and I walked across the yard. Yes, it was a grand afternoon!
RW came over in the early afternoon before RW and Lou showed. He came to figure out that water leak. We had a nice long talk before he went home. Was good to see him too!
I painted a pumpkin at Susan's house this afternoon. That's what we were doing when RW and his group showed up. Me, Linda, Ma, Evelyn and Susan. Susan took pictures of the pumpkins and if she sends them to me, I'll show you the pumpkins. We are an artsy lot! That was great fun too!
Mr. Skunk hasn't shown his hide since the last post so I don't know what is going on with him. RJ said he could smell skunk in the shed, but I was out there this afternoon and I didn't smell skunk.
I need to call it a day. It is almost 4 in the morning and my old eyeballs are begging for sleep! So without farther delay....
You all be good to one another. Smile at a stranger and hug someone dear to you today.
Peace
831

Wow, I love the fabric roses :)

What a nice happy family you have there :D

Have a nice day!