Mr. Kitty Gets an Operation and Other Creative Deeds

Greetings Readers!
Can't say I've done a great deal in the time since I was here last.
Mr. Kitty did indeed get some surgery! He had a double eye implant, some eyebrow work, reconstructive surgery on his feet and some rhinoplasty!
I was going to actually give him kitty paws, toes and all...but it ain't happening just yet with those toes on the bottoms of his feet. Gotta think on that one for a bit. Might have to drag out the paper and masking tape to remedy that one. Or I may just leave Mr. Kitty with flat feet. Guarantees he'll never be drafted!
Anyway.....Mr. Kitty, as he stands at the moment: 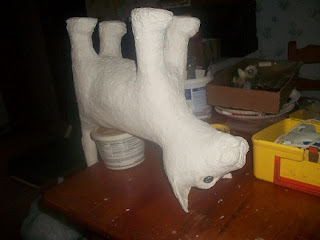 He's not standing at all.
He's laying upside down on the kitchen table. Looks like he's floating in space but he's not quite that talented!
Later, might happen today, might not, I'm going to give him a coat of gesso. Will have to wait for that to dry so I can sand him down in preparation for his first coat of color. His eyes need repainted as well.
He's coming along slowly, but nicely!
I've worked on hearts since the last post: 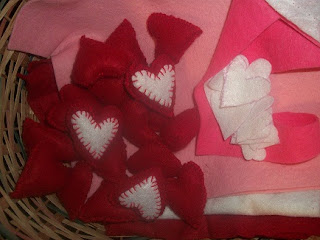 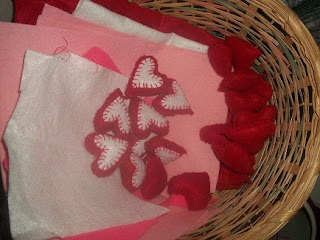 I'm still not sure what is going to become of these hearts.
Magnets?
Truth be known I'm a bit tired of the magnet scene.
Garland?
Maybe.
Ornaments?
That's more likely than a garland.
Truly a work in progress with no direction!
We'll see where the hearts take us!
And because two projects in the works at one time is not enough, 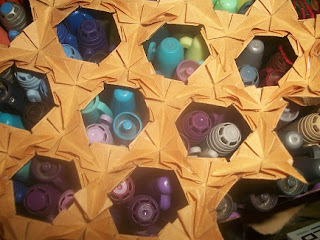 I'm working on a bucky ball as well.
The ball will probably be done in the next couple days.
All depends on how intent I am on folding a gazillion little triangles into units.
I need 60 for this ball. I've folded somewhere between 30 and 40 of them.
I don't think you're supposed to put the thing together till you've folded ALL the units, but I don't always follow the rules. Sometimes, I just gotta do it my way. Whether its the right way or not. This seems to be working out OK though. I've only had to unglue three of the units to make things right. You're not supposed to need glue to hold this sucker together but my units refuse to stick together on their own. They need glue.
I'll be sure to show you the completed project.
I also made a chipboard box to house the red foil paper flower ball so it is safe in storage. The box is nothing to look at, only functional. And it's way too big for the flower ball so it will probably end up housing something else in storage that could use some protection.
Until next time......
be good to one another!
It matters!
PEACE
831
Posted by Donna at 8:16 AM