blue paint, a few fishes and lots of sea things

Hello Readers!
I hope you all are well.
Life's going by at warp speed....I know it is!
But it seems as though I am in slow motion and getting nothing important accomplished.
Things get done but those things don't really mean a lot in the whole scheme of it all.
Whatever IT may be.

The fibromyalgia is kicking my butt in more than just physical ways these days. I seem to be in a fog. My brain is slow. My reflexes are slow. As I said, life is going by at warp speed yet I seem to be in slow motion.

I'm content with the slow pace of my life even if it feels like I'm getting nowhere.
I've kept busy when I haven't been sleeping.
The fibro messes with what little sleep pattern I have and insists I sleep for no less than 12 hours at a time. It's crazy and makes no sense....none!
The muse goes along with this arrangement most of the time though and she's not let me down completely in this round of fibro-fighting. I'm thankful the migraines have finally left the scene! Knock on wood, they stay away! Been months since I had a migraine!

I entered a chunky swap the other week. 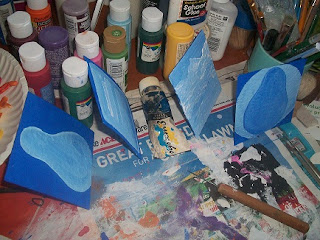 The theme is something blue.
I've gotten this far on mine.
Could be they'll look nothing like this when I'm finished with them.
I believe these are due in Scotland sometime at the beginning of June so there's no great rush on them at the moment. I had the blue paint out already, figured I'd see what happened when I played with some shades of blue.
Nothing too exciting here. Let's move on. 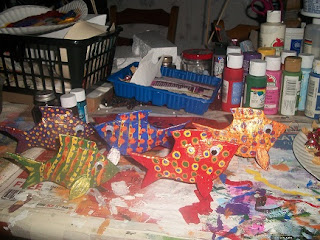 I finished another five paper mache fishes.
There are still six fishes left to complete but I've put them away for now.
The flamingo is next on the list after I finish the blue chunky pages. I've been thinking about that flamingo for days! I've figured out his legs, just need to experiment to see if that idea is going to actually hold him up!

In the deskroom I'm working on this: It is as dark as it appears in the picture.
I wish it had a little more yellow on it. The browns kind of over power it all.
Nothing to be done about that now though. So, we'll soldier on and see what happens when it all gets together. 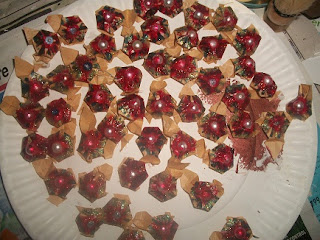 These are the bucky ball units as they look now. I'll cut those little flaps off the sides of them before I stick them to the canvas. They'll be clinging to the rocks. Sea critters of some sort I conjured up out of my head. Barnacles perhaps? 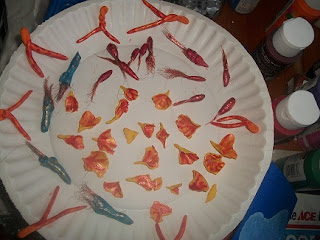 These are made from polymer clay and copper wire. I painted them with acrylics.
They will be glued in among the rocks as well.

Yesterday I ironed a few different colors of easter grass to add some color along the rock line. 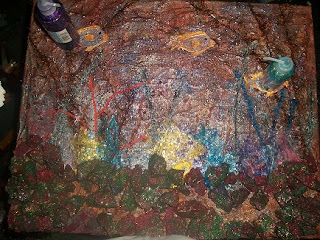 Purple, two different colors of pink, blue and yellow.
To iron easter grass, which is basically shredded plastic, you place a bit of easter grass between two sheets of parchment paper. Spread it out evenly to leave holes in between the shreds of plastic. Cover it with the second sheet of parchment and iron it with your clothes iron for a few seconds, making sure to move the iron around so you don't burn the parchment paper. Won't take but a few seconds with your iron set to cotton.  Ironed easter grass is really cool stuff!
The rocks sparkle a whole lot more than appear to be sparkling here. It was dark when I took this picture.
The fishes have bottles sitting on top of them cause they wouldn't adhere to the canvas without help. Bottles make pretty good weights in some instances.
I've used a couple of different types of glue to adhere these things thus far. I don't think it much matters just what kind of glue is used. The first four fish pictures I've made, I used mostly E6000 to adhere all the stuff. For this one, I've used some clear, acid free glue made for scrapbooking to adhere the yarns and most of the rocks. The fish and the rest of the rocks and the easter grass are held on with tacky glue, which is basically just thick pva glue. When I get to gluing the polymer clay and the crocheted wire blobs, I'll probably use E6000.
As soon as the rocks get dry, I'll add some more easter grass in smaller chunks, some more rocks and the rest of the sea life things. There will be more yarn also. I have a string of brown wooden beads with orange beads as well that will become coral. There are a few other shades...lighter shades of eyelash yarn to add also. There will be a total of 7 fishes, maybe nine if I think the other two are really needed.
It's coming along nicely.

I plan on finishing this fish picture in the next couple of days. Then you all will be hearing about the flamingo's creation. Bet you all just can't wait either! :)

Be good to one another!
It matters!
Peace, my friends!
831