It's all about fishes.

Hello Readers!
The sleep monster kidnapped me yesterday and I missed my sister's birthday party all together.
I know better than to lay down for a short nap...I didn't hear that phone ring, two feet from my ear as I slept. I was so sleepy though...I wanted just a short nap...couple hours. I knew I was expected next door. The wing ding was at 6 pm. I lay down for a nap at 3pm. I woke up at 5am this morning.
I feel like something the cat dragged in.....

I fixed these here fishes up the day before yesterday in preparation of a paint job.

This is the armature of the fishes. 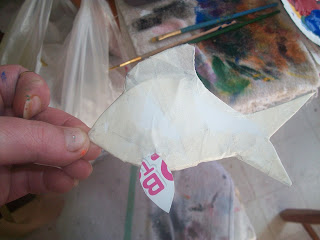 I had to make some changes in the middle of the design of the armature. That's the reason for two kinds of tape. The wooden bead is hot glued in between the two fish shapes of the body. I probably could have done without the wooden bead as well. It was helpful though to have the chipboard separated already when I went to stuff it with newspaper to form the shape of it's belly. 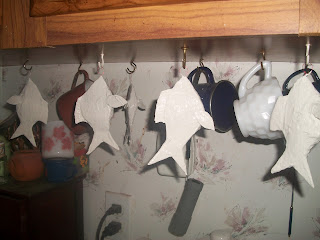 They're slathered with homemade gesso and left to dry overnight.
I did the ten in this post in two batches of five each.
There are still five left, 2 still need taped and 3 are ready to be gessoed. 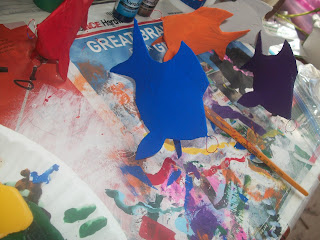 They're given a coat of cheap acrylic paint after they've dried good. 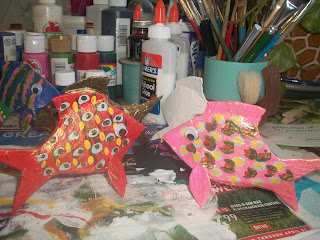 and then some dots and dashes and lines and whatever ends up there on the fish... 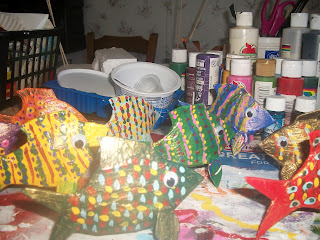 and you end up with a colorful school such as this. 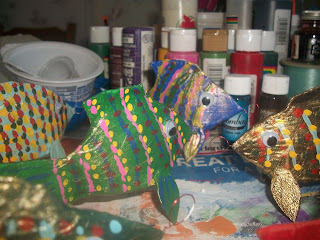 After the dots and dashes and all had dried good I brushed a thin coat of pearlized gold puff paint on the fellas and super glued a wiggly eye on either side of their rather flat faces.

I ran across one in the batch I'd put the tape all over that didn't even have a loop hanging out of his mouth. Not sure how I overlooked that while taping the critter up.
If you click on the pictures, they'll be bigger. 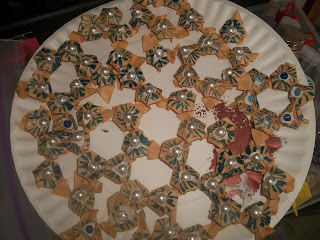 You all remember the failed first attempt to construct a bucky ball?
This is what it looks like now.
I've been contemplating Fish Picture #4 since the last post, though the canvas looks exactly the same as it does in the pictures I showed you. ---- No! NO! I take that back!
It doesn't look the same! I just forgot to take pictures of it. I've added some sage green colored eyelash yarn and a bit of soft royal blue colored twisted yarn to the coral field.
That plateful of bucky ball units are going to be a part of the seafloor in the picture.
I painted the stripes with Dr. Martin's Ink and piped in some homemade gesso to adhere the fake pearls and little blue beads to. These will be scattered across the bottom of the picture. I don't think I'm quite done with these yet....I haven't brought them back to the deskroom to put a few of them on the canvas to compare their color. I want them to be noticed, but not glare at the viewer. I'm still working on it.

Maybe tomorrow I won't feel like something the cat dragged in and I will actually get some rocks adhered to the canvas. I still need to make a few anenomes, and some other fantasy sealife.

Whatever makes you happy today, go for it!
Be good to one another!
It matters!
Peace, my friends!
831

I so love your art process, I hope everything is also good with you, thank you for your always remembered words of encouragement and wisdom....