Drawing, Building and A New Project

Happy Saturday Everyone!
It's been a wild weather Saturday in the state of Kansas! Luckily the bad stuff has stayed out of my neck of the woods for the most part. Got my fingers crossed it stays that way. Weather gurus are saying we aren't quite done yet. We're in a wind advisory but for some reason the wind stopped blowing once the rain left.
There were at one time, 9 different tornado warnings going at the same time this afternoon.
That's a LOT of tornadoes to be touching down at once! Several counties had more than one tornado on the ground at a time.
I'm in hopes none of them were severely severe. I don't own a TV and the web has proven useless for up to the minute weather reports that make any sense to me!
Right now, the sun is shining bright through big fluffly white clouds.
We got rained on earlier today...round about noon...it came down in bucketfuls, the wind blew a touch and pea sized hail fell down for all of two minutes.
Nice little thunderstorm doing its thing.

I hoofed it to my sister's house before all hell broke loose. Got a little wet on the way home cause it was still sprinkling. Wasn't even raining when Ma and Linda insisted I get my butt over there, just in case.
I ain't complaining! I don't like to get wet in the rain. And had I waited till it started raining, I'd of gotten soaked! That cane slows me way down!
Much as I don't like the idea of waiting out a storm (that may never materialize) at my sister's house, it's much better to be there if it happens as to be at home and have to high tail across the yard to take cover in the basement. I'd like to be as far away from my house as is possible should a tornado decide to take it out!
It will not survive a tornado! Course my sister's house could go as easily as my own in that event, but at least she lives in a real house and has a real basement below ground!
I'm afraid my two cats and that fool dog on their own should such an event happen. The dog will be at my sister's house with me. I can't go anywhere far without my shadow...the cats will have to fend for themselves.  Fred will not go in the basement though. He's afraid of the steps and there is no amount of cajoling that will convince him it is safe to go down them. He's on his own too.
Let's hope to make it through another storm season intact!
So far, so good!

I did a bit of drawing the day before yesterday.
I took pictures of the 4x4s because the printer was in use at the time. I usually scan drawings. 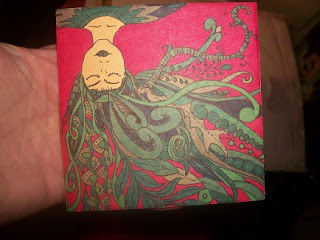 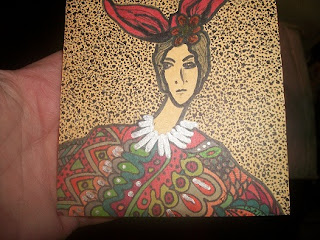 Then I built a box yesterday with intentions of using it as a shipping container for a paper mache fish that I traded off in the Easter-a-thon last weekend. I nixed that idea after the fact. Would help if I could measure correctly! The fish went swimming in this box! I only wanted the fish in a stiff container so it won't get squished on it's journey to South Dakota. I put the fish in a box that organic tea came in instead. The tea box was the perfect size for the fish wrapped in bubble wrap and the ATCs I traded her as well fit in the box nicely. 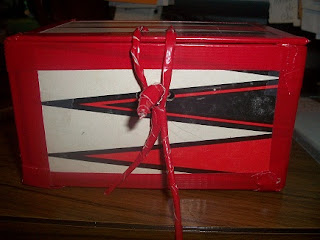 Checker Board Box
Red Duct Tape
5.5x3.5x3.5 inches
It's made from a checker/backgammon board

I got some excellent news out of my mailbox on Wednesday. 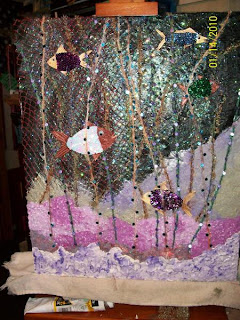 Someone loved Fish Picture #2 to pay cold hard cash for it!
This is the very first large piece of art I've ever sold. It had been sitting in the gift shop in Lucas for over a year. I'd heard stories about folks oohing and ahhing over it, but no one wanted to pay the price asked. I got a check from the Art Center for selling the painting and a little book. I've no clue which little book. So I'm a happy camper about this and I'm quite stoked to get moving on Fish Picture #4. Fish Picture #3 is this one: 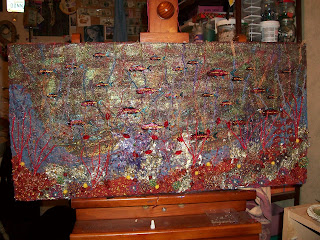 If you click on it, you'll get a bigger view.
This one hangs on the wall in the hallway at my house. I'm going to give it to my son's wife one of these days. Every time they come to visit she always says, "I want this picture, Mama!" as she stands and stares at all the components on it.
I won a blue ribbon at the county fair for this picture!
Fish Picture #1 is still at the Arts Center Gift Shop in Lucas awaiting the person who will fall in love with an ugly lone fish on a small canvas. It will happen!

I was going to show you all Fish Picture #1 but I don't seem to be able to find it in My Pictures on this machine. it is more on the lines of Fish Picture #2 than it is #3.

Beings Fish Picture #2 finally sold, I'm gungho about #4! Which is actually fish picture #5 if we want to be technical. I made Evelyn a fish picture for her birthday this past July. I won a blue ribbon for it as well at the County Fair. 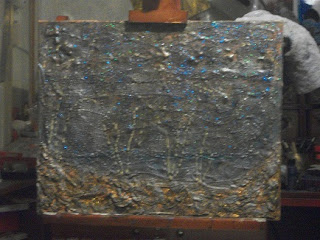 I had this canvas sitting on the easel for months with it getting no farther than what you see above.

There are numerous layers on this canvas. Dictionary pages to cover the paintjob that was already there when my mother brought me this canvas. It was painted black with one very wide stripe of green paint slapped on just off center. There were three other canvasses bought with this one that were quite similar except for the color of the stripe. My mother made a haul with the dollar she spent on the four!
It is 18x24 inches. Along the bottom is some gauze bandaging soaked in thinned glue and just laid on the canvas to dry after I squished it around to get it how I wanted it. Then I painted it a flesh color. The bumps and indications of plant life are all Gorilla Glue. That's some fantastic sculptural stuff! There are a few different colors of paint on it. Not sure why it's showing up so gray on my monitor. It was really more brown than gray...though it does have a layer of blue paint over a layer of metallic copper paint.
It just quit talking to me is why it sat for so long.

I took it off the easel in the deskroom just a few weeks ago and replaced it with the pink tree canvas. That one's not gone anywhere since I showed it to you all months ago. The pink tree has become my tray for fishes for the newest fish picture. 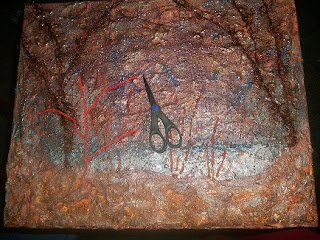 I painted the canvas here and there and made it a bit more brownish. Then I slathered on some blue glitter glue. That was fun! I used my fingers! I added some eyelash yarn and a bit of orange rick rack for some coral/plants whatever. 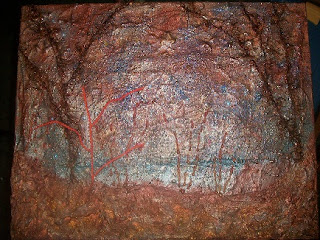 I painted all the edges of the canvas with metallic copper acrylic paint and slapped a bit on the front of the canvas along all four edges concentrating on the bottom part and the top middle part.
Since taking this picture I have added more. There is still a lot to add though before it's done. 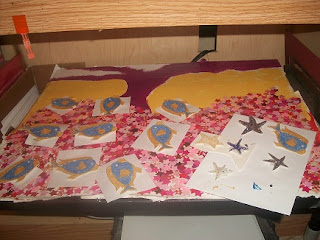 You can't have a fish picture without fish, now can  ya?
I made some starfishes too.
Cardstock painted with puffy paint.
Pink Tree Tray sitting atop the scanner with the fishes sitting on it.
I was lazy...didn't want to move all this just to scan the drawings early this morning. 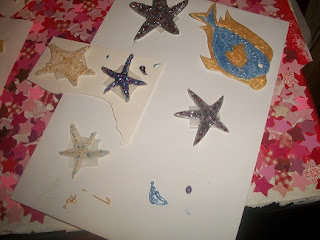 A close up of the starfishes and a fish before I toned that blue down a bit. 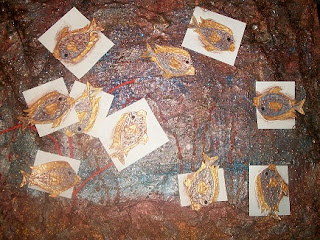 Fishes with a wash of metallic copper...that same color on the background and edges of the canvas.
I like them better this way....they were way too bright against that canvas before. 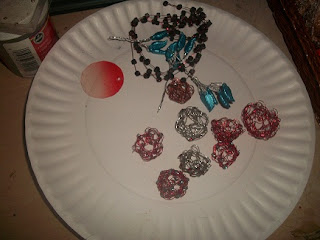 A few of the elements I've made for the fish picture thus far.
The string of beads are wooden and knotted on a length of copper wire
The blue leaves are plastic beads wired into little 'bushes'.
(Are there bushes in the sea? Or something equivalent?)
A shell bead that I'm uncertain will end up in the picture, just depends on how well it blends when I get busy on the foreground.
The other things are crocheted wire with dots of glitter glue on them. 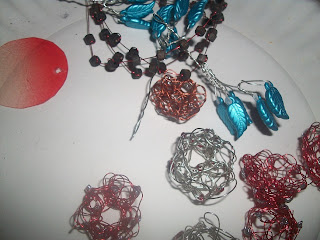 A closeup of the components.
I've already put the wooden beads on the canvas.

And an underwater fish picture needs some rocks cause even I know the seafloor has rocks.
I'm 99.9% sure it does, anyway. I don't really know...I've never really been around the sea. I've been to the Gulf of Mexico down in Louisiana. I sat in the surf for about an hour and had had enough of the beach.
And I went to the beach in Malibu, California twice for a few hours. I only actually got my feet wet in the Pacific Ocean once. I don't know much about the ocean in a hand-on kind of way. I'm probably not qualified to even be attempting to make fish pictures involving fantasy seascapes. But maybe I am.
Anyway, you need rocks. 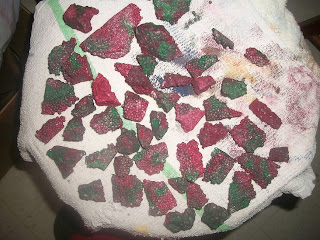 My sister thought these were really lava rocks that I had painted.
They aren't real rocks at all. They're a bunch of styrofoam packaging material that I broke into chunks and painted wine red and green. 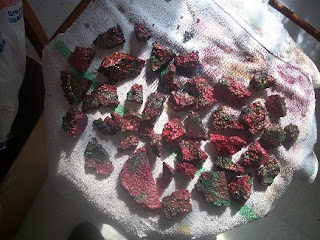 And then after they dried, I painted over them with copper colored glitter glue. 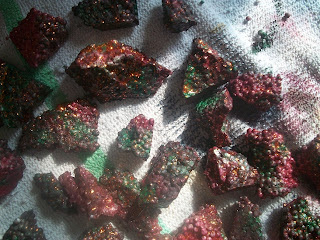 See how they sparkle???
The whole fish world will sparkle when I'm done.

So a new project is in the works and the paper mache fishes are still stranded in shallow water, so to speak. The flamingo is not in any new state either....I probably will work on the paper mache fishes before too long. It won't take me long to get all the components for this picture made. I can work on paper mache fishes when I tire of wire work and crochet. I'm thinking I need a few anenomes and I'm thinking paper mache may be the way to go with those. I need to whip up a batch of paper clay.  Or I may just make them the same way I made them for Fish Picture #3 and use polymer clay and copper wire for them. It's all one big experiment. I'll now if it's a success when it's done.

That's what I've been up to when I haven't been asleep. And I've slept a great deal since the last post!
Be good to one another!
It matters!
Peace, my friends!
831