Hello Readers!
I hope you all had a Happy Easter!

I finished the four fishes I've been rambling on about. 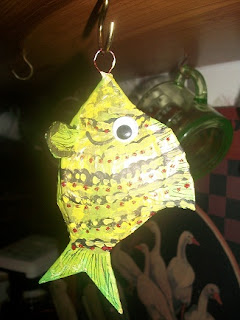 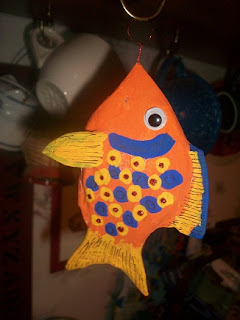 The orange one and the green one are up for trade over at AFA.
The other two are too heavy to be sending through the mail. I don't want to spend an arm and a leg on postage. I like to eat! 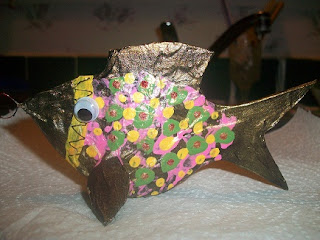 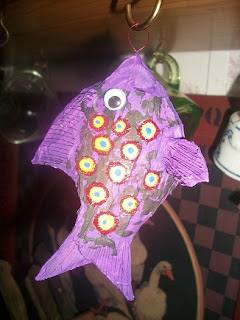 I like the greenish yellow fish best of all four of these.
You all will see more fishes soon as I will be finishing out the 22 that are left to do.
I think I'll do them in batches of six, instead of four. It's just as easy to work on six at once as it is to work on four of them. I don't have room to spread them all out to do the whole lot of them at once. And I'd get bored stiff working on that many at once anyway! 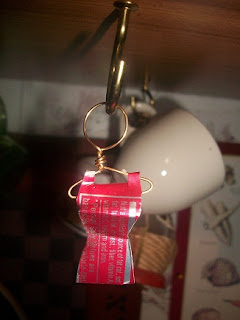 I went surfing through pinterest and came across a picture of a little red dress made from a coke can.
Mine isn't quite as cute as the one that inspired it!
It is all experimenting though!
I am the mad scientist of the art world! 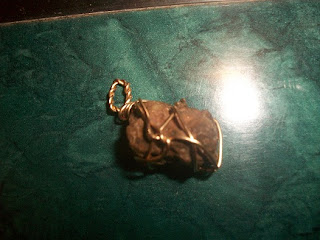 Then I came across the tutorial on how to wrap anything with wire that doesn't have a hole in it.
This is just a plain old brown rock I saved for some reason or another.
I really like the color of this rock and I do believe that is the reason I saved it. 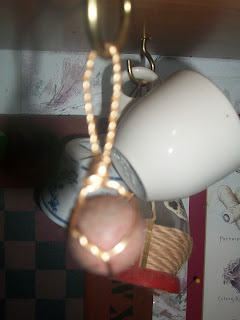 This terrible picture is of a wooden ball that has been wire wrapped in the same manner as the rock above. I don't know why sometimes my camera will capture the foreground in focus and other times it puts the background in focus. I took about 2 dozen pictures of this thing and not a one of them turned out any better than this picture did.

Learning this method of wrapping things in wire is a good thing to know!
I'll be using that knowledge again, I'm sure! 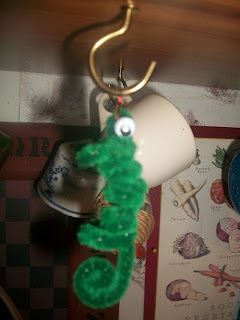 And then we come to this little chameleon charm made from a couple of green pipe cleaners, a bit of copperwire for a bail and a couple of googly eyes.
He's rather cute, yet quite amatuerish. 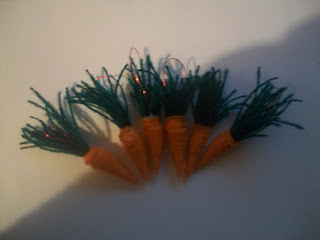 These carrot charms are what started off the charm making on Monday.
They are made from masking tape, crewel embroidery yarn, copper wire and a bit of white glue.
Easy little carrots to make.

I made a batch of these a few years ago and put the individual carrots on ATCs with a rabbit holding one. The first batch I made did not have a bail for hanging them anywhere.
I think the bails are a good addition.

Not shown, cause they aren't done yet, are a dozen more carrot charms made from polymer clay with crewel embroidery yarn for leaves. I don't know how well the embroidery yarn is going to hold up in a 200 degree oven to bake the clay. Report to come later.
I'll bake the carrots when I get some more bones for the skeleton made.
It might be October before that happens. I am not known for speedy completion of projects!
And maybe I'll get the urge to finish up the skeletons tomorrow!
Who knows!

The drawing muse is still in the house. 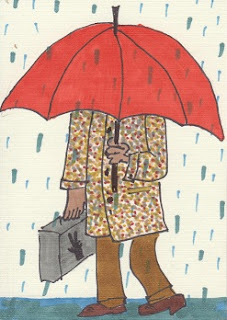 In The Rain
ATC
markers on cardstock 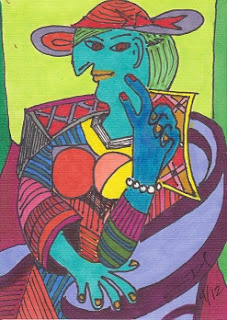 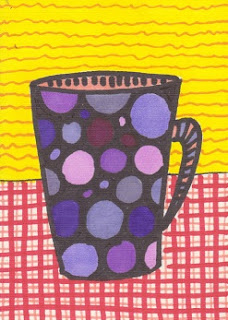 I'll be stuffing envelopes with trades this evening in preparation of a run to the post office in the morning.
The dog needs some food as well so looks like a shopping spree is will be on the menu also.
I suppose while I'm out and about, I might as well go pay the bills too.

Be good to one another!
It matters!
Peace
831