A Trip to the Lake, Stars and UFOs

Hello Everyone!
The weather has been GORGEOUS in my neck of the woods for the past few days!
I took advantage of having wheels again and took my sister and the dog to the lake for awhile Thursday evening. It WAS Susan's idea, but it was a good one! 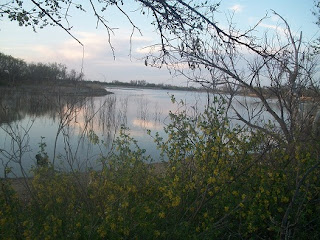 Rooks State Lake is about 5 miles from my front door. It's way down from the last time I was out there. When we drove into this spot, there were about 4, maybe 5 dozen ducks on the water but they all flew to the middle of the lake. You might be able to see some ducks if you look at the picture full size. It's probably a good thing they did move away cause Fred dog was faunchin' to get in that water!
That dog hadn't been swimming since probably September.
I think the water is still a bit chilly. Highs in the 80s for a few days is not enough time to warm the water considerably. 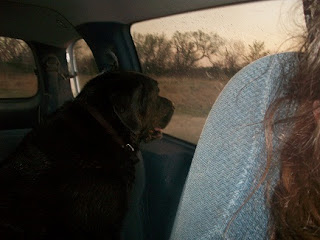 Fred really didn't seem to mind the water temperature though. He swam a bit, ran around a bit, swam some more, ran around a bit....there was exploring to be done!
When he went off down the lake shore I was getting in the van to drive over to where he was heading.  He came running, about knocked me over and got the driver's seat soaking wet with muddy paw prints....fool dog! The water droplets all over the window in the picture above are in the inside! My sister was sitting in the passenger seat. She was as speckled as the windows when that giant black dog decided to shake off the lake water! Fool Dog, I say, Fool Dog! So he rode over to where he had been heading, quite fine on his own, and got out of the van to swim some more.

Lots of flowering shrubs and trees in bloom right now. 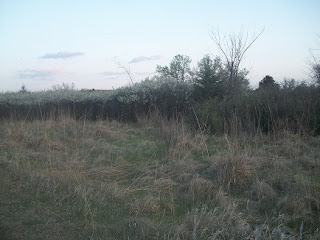 I believe these are either wild currants or gooseberries. 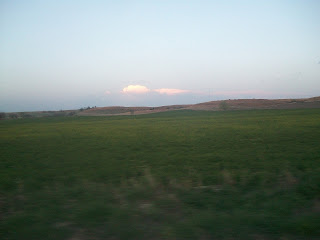 Thunderheads building to the east.
Love, love, love that shade of green! 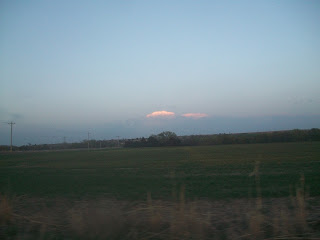 We did not get any rain from those clouds. 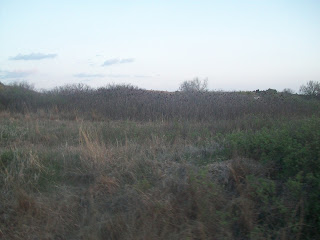 This is sumac. The Native American Indians made a lemonade aid type drink from the ripe berries of sumac in the fall. Perhaps I'll give that a try when the time is right. These are last years berries you're seeing. Lots of critters feed on the sumac. 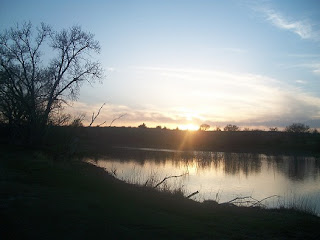 Sunset on the lake.
It was even prettier being there!
This is Fred's favorite swimming hole.
We had a fantastic evening at the lake with the dog in tow!

My muse is not in top form this week at all!
I've got a lot going on but not much being accomplished. 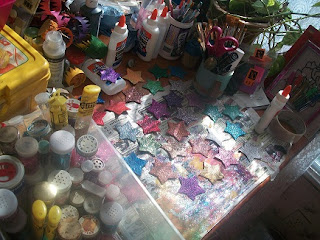 We'll start with the glittered stars cause I have accomplished a bit with them!
This is the other side of the stars all glittered and now waiting for the next step.
I wish I'd of taken a picture of those four stars that acted very strange when I put the acrylic varnish over the glitter after the glue had all dried. It crackled, such as a crackle medium will make acrylic paint crackle. I've never seen glitter act that way. It was two different types of glitter...I fixed it by adding a layer of glue and reglittering to hide the cracks.

I gathered up all the glittered stars and put them in a mushroom box. I took them to the deskroom with intentions of making them into garlands yesterday.
I made a bunch of wire jumprings and came to a dead standstill when I started attaching the stars together.
It just wasn't working. So put everything back in the mushroom box and sat it on the kitchen table. It's best to walk away from a project when conflict rears its ugly head! Experience tells me this! 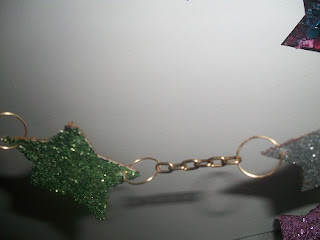 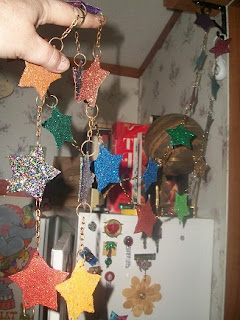 There are 12 stars on each garland.
Top picture shows the detail of the jump rings and chain between each star.
The garlands are about 5 feet long overall.
I'll be sending these to my two daughters-in-law just cause I love them!
They are great women...they treat my boys well and they both gave me grand babies!
I need to figure out a better way to take pictures of garlands. 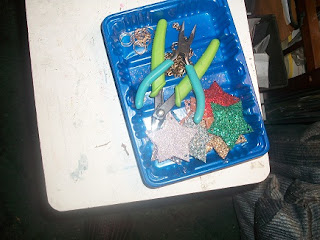 I ended up with only 11 stars. That means there were only 35 of them to begin with.
I'm thinking this is a UFO project. I need to locate the metal embroidery hoop I ran across in the burnt house the other day. It's going to be the hoop and the stars, the hangy downers of a mobile.
That would be the blue mushroom box. 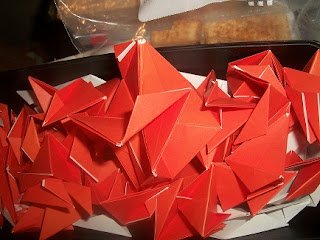 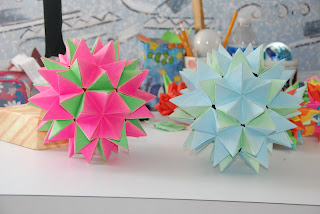 That box of orange and white paper should eventually resemble one of these. The orange paper is white on one side and was originally envelopes. The white paper is just plain ol' copy paper.

The envelope book has only been laying around since January. 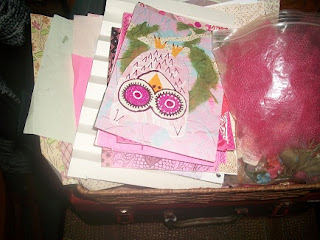 I worked on it in February and didn't touch it the entire month of March till I gathered all its components together yesterday while doing some cleaning in the cutting room.
this one just lost all momentum because it once had a destination and now it does not. I lost my focus on it when the recipient backed out. I'm not very fond of the color pink. It wouldn't of been my first choice but that is the choice that was chosen and now it doesn't even matter.  Now that I've unearthed it from the 'pit' that is the cutting room, it may start talking to me again.

I have been thinking about sewing books lately. Only thinking though, no action has been taken.
Yet. 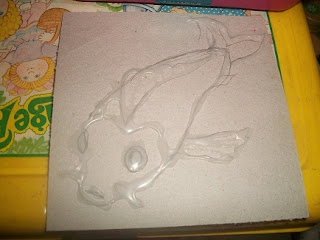 And as though I don't have enough UFOs already....I started a glue painting project yesterday.
this one will be a chunky page. 4x4 inches.
It's a new project for me in that I've never done this technique before. You all will see it finished in the next post cause I intend to drag out the paints and finish it before I call it a day! 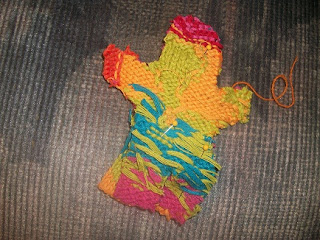 There's that half-done monster (yet another UFO!)
that I was talking about a few posts back.

It has just dawned on me, there is another monster in the works at the sewing table too.
Monsters should not be as small as the colorful undone monster shown. They should be large enough to easily turn right-side out. It's going to be a chore to do that to this one when he's ready.

The other UFO Monster used to be a fur collar for a woman's coat.
You'll get to see it soon. 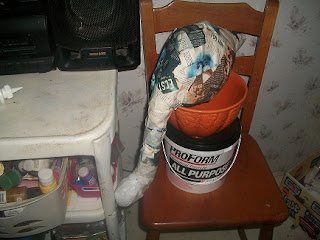 Poor Flamingo has fainted from waiting so long to get some more attention!
My muse is mad at this critter for some reason.
Maybe I should make some paper clay....
I'd have to move that stubborn bird to get to the bucket of joint compound under my orange mixing bowl and maybe that would jar things up? Probably not. I think what's holding me back on this bird is his legs. I need to tackle that issue and then things should go smoothly.
Paper clay will have to be made sometime soon though. 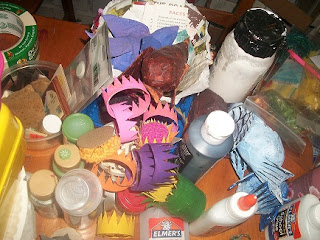 Not just one, but two UFOs. (Even more than that if you count each individual. We won't. It's bad enough I have a list of UFOs as long as it is! Let's not really count them!) :)
There are the paper mache birds that were started way back in November of 2011.
And there are the paper tube flowers that lay scattered in a heap!
those flowers are harder than they look!

I spent a few hours off and on in the cutting room last night, reorganizing things, throwing crap out, tidying the messes! Wish I could say that room is spick and span! It's not. I didn't even make it half way cross the floor! Good thing it is not a huge room!
Ma has been motivating me out in the burnt house to get things organized. We spent Tuesday tidying up the kitchen in the house and then the next three days out in the burnt house. Wednesday brother helped us.
Bunch of junk out there! The trash men will have their work cut out for them!

I have UFOs piling up, but that is not anything new really. These I've shared will be completed and there will be more to take their place! I'm pretty sure I'm not the only creative person who UFOs. I've only shown the ones of recent vintage! We won't even discuss others. I assure you, there are others!