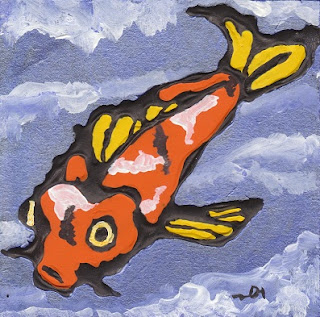 I didn't exactly follow the tutorial for a glue painting. I drew the koi and outlined with white glue as you all saw in the last post, but that's about as far as followed along. I did my own thing instead. The tutorial that gave me this idea had you cover the whole thing with gold paint and then after that dried a wash of brown to highlight the raised areas. Gold would have helped this koi a bit but I couldn't find the bottle of gold paint to save my soul last night so we have no gold on the koi.
I covered it all with black paint, let it dry and then did the blue and white on the background and then the yellow and orange of the fish. I let it dry overnight before I added the finishing touches.
This one is 4x4 inches on illustration board. 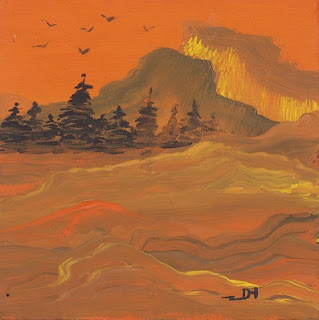 Orange Mountain Lake
Chunky Page
Monochromatic Orange ....I used only orange, white, black and a bit of yellow acrylic for this one.
It is 4x4inches on thick mat paper 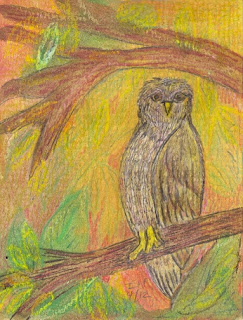 This one was started sometime last month. It is an oil pastel resist with regular pastels, colored pencil, graphite and a bit of marker. The regular pastels and the markers do not play nicely so there isn't much marker on there! This one is on cardstock, 3x4 inches. I'm thinking it will be part of a handmade book cover in the future. Either that or a postcard. It's not the best owl I've ever drawn! 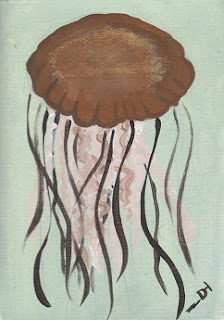 Acrylics on cardstock.
Sea Nettle Jellyfish
ATC
You all realize I've never seen a real jellyfish. They are rare as hen's teeth, maybe rarer, here on the plains of Kansas! This one was a challenge! I'm not sure I captured the true essence of a jellyfish. It resembles my reference picture, but I don't know....I had the paints out when I came across a request for a sea nettle jellyfish so I looked it up on wiki and JUST had to paint one. I hope it really does resemble a sea nettle! 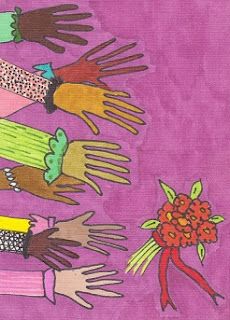 At the Wedding
ATC
markers on cardstock
I drew this one on the 31st of March but colored it just today.

I changed the paper on the painting table! 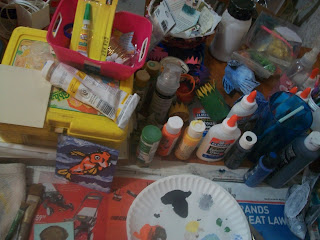 Those paper tube flowers are still not done though.
Instead, I played around with the paper mache birds that have sitting on the painting table since before Thanksgiving! I thought there were only four of them there but when I got to digging around, I found five of them! Two of them are now ready for their hangers but the other three need some finishing touches still. I'll show them to you all when they get done. 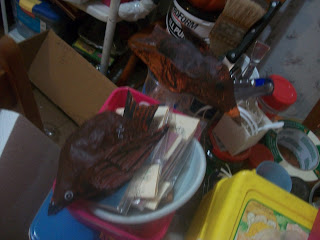 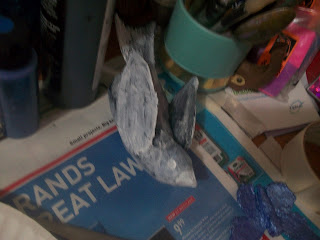 This one was PURPLE before I gave it a coat of black and a dry brushing of white. It still needs help.

I told you about two monsters in the works yesterday. I was going to cut out a monster this afternoon but my mother came along and we cleaned out in the burnt house this some. Then we went to town for an hour or so. When I finally found the spare moment to cut that monster out of that rabbit fur collar, it was raining out so I couldn't take it out on the front porch to do it. I learned my lesson about cutting that thing in the house! There was green rabbit fur all over the carpet in front of my chair in the livingroom when I cut the satin backing off that collar! That monster will have to wait till tomorrow! 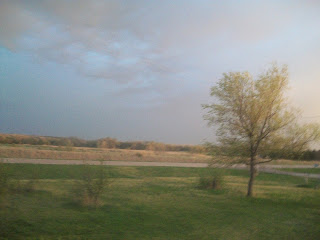 I did get a picture of the front edge of the rain storm that's happening as I type. This is looking to the south out the back door. It's a crappy picture cause someone didn't change the setting on the camera from close ups to distance! 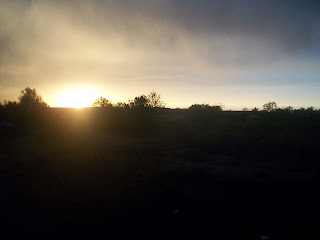 This is looking northwest out the backdoor. Another sunset!

It's raining to beat the band right now! I battened down the hatches good before it started so I won't have wet seats in the van in the morning and there shouldn't be big puddles in the burnt house from the doors being left open.
I do not want to, but I must go out to the burnt house with my flashlight and see just exactly where those leaks are in the roof!

Ma and I got the tub room cleaned today. There's not a tub in that room any longer but it's called the tub room cause there used to be a claw-footed bathtub in there before the house burned. I loved that tub! There are boxes of koosies, key chains, plastic bags, hanging lights, awards folders, magnetic clips and presentation folders in that room now. There's a nasty old sofa in that room too but it's out of there as soon as my brother comes along to take it out!  I don't know why those boys didn't take that bachelor couch out of that room instead of stacking all those boxes on top of it. It wouldn't have been too bad but it leaks in that room and the sofa and a bunch of those boxes got soaked! That sofa is DISGUSTING! We can't even really call it a bachelor couch anymore! It's trash now!
Yesterday that room was packed to the rafters with just a path to get from one side of it to the other. We threw away about half the contents of that room cause it was ruined from being wet.
The leaky roof is on the west end of the house. It's a flat roof on that section and when the house burnt, it burnt twice in that part of the house. First at about 5a.m. and then again around 10p.m. The roof was never really fixed, it was only patched. That was almost seven years ago and the patches need patched again! Only good thing is, the house has concrete floors!
My workroom out there is coming together nicely also.

Alright!
I've rambled enough for one day!
You all be good to one another!
It matters!
Peace, friends!
831