Been Keeping Myself Busy

Hello Readers!
Since I was here last to add some pictures I've kept busy.
Grab a cuppa! I have a lot to share. 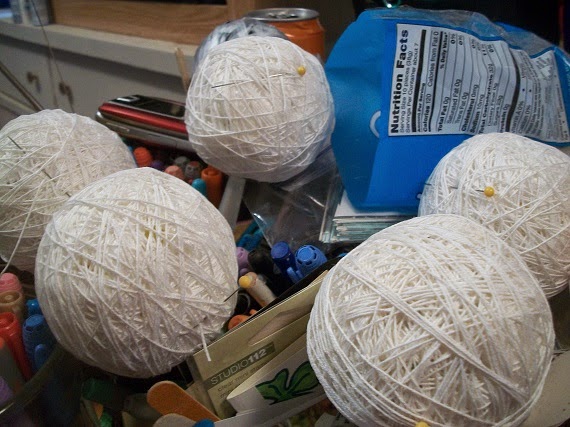 I made some more rattle balls from scratch. Inside these cotton string covered balls is a layer of thick macrame cord, a layer of 3 plastic grocery bags and at the core is two plastic bottle caps taped together that contain three small pieces of metal from magnetic clips.
In this picture they are waiting for their layer of material. 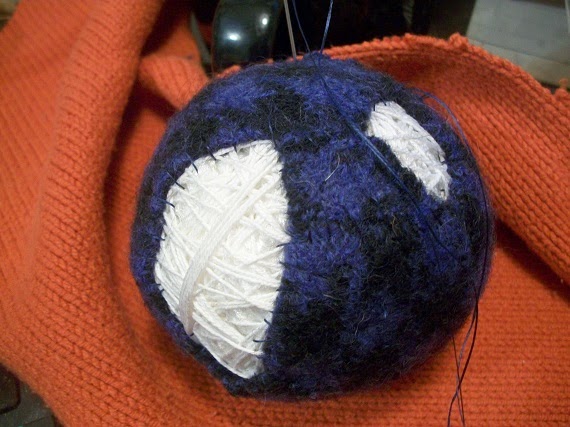 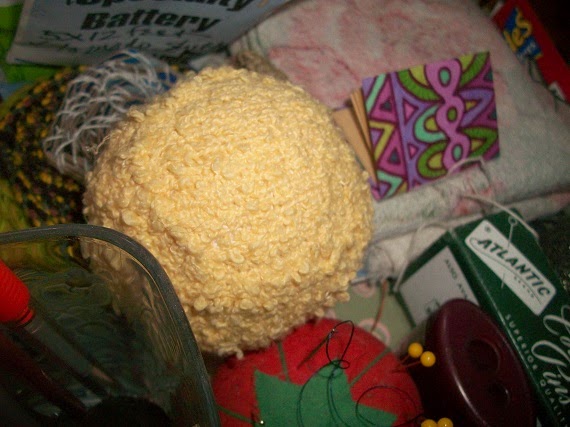 This yellow one is a cotton sweater. It has been waiting on some embroidery for some time. I have embroidered ten balls, made six of those from scratch...since I got this one ready to be embroidered.
This one fell out of my bag on the way out the door the last time I went to see RJ and his clan. That was mid April. I came home and found it on the kitchen floor. Ma said the cats had been batting it around while I was gone. You all already saw the three I embroidered with crewel thread in the last post. I embroidered those while visiting my son. I took everything out of my bags looking for that yellow ball! I was really glad to find it when I got home! Even if it was on the kitchen floor and the cat had batted it around! I stole it back from cat and will do some embroidery on it eventually. 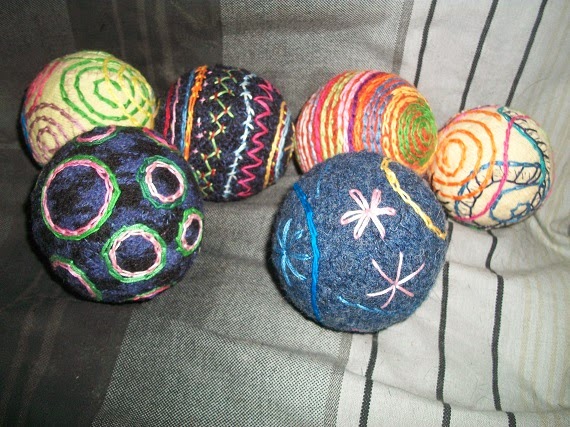 These are the six I made last week. I think I spent about a week working on these. Not ALL week...I had other things in the works as well....The blue one needs a bit more embroidery before I can say these are done. I like the striped one the very best. The two yellow ones are cashmere sweater. Cashmere is very thin! As you can see....embroidery can be done on it, but it wasn't much fun to do. Thick stuff, the needle slides right on through. The thin stuff you have to deal with the thin cotton string beneath the shell.
I really enjoy making these things!

I've been working on a paper bag book for a couple weeks. 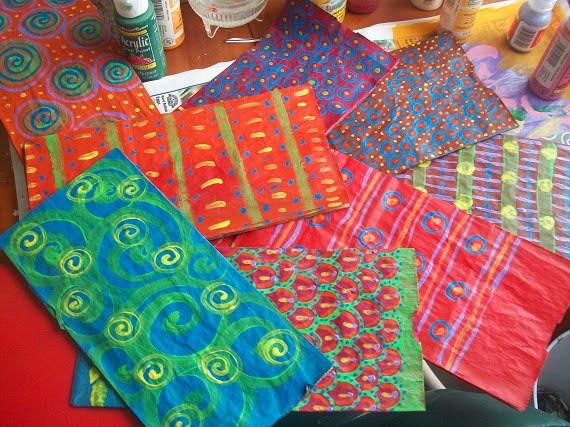 I painted the brown paper bags. These are about 9 x 5 inches. I used acrylics on them, painted on both sides. I forgot to turn them all over and take a picture of the other side.
I am older than the last post. I added another year to the tally.
I intended to have nine pages when I started this book but ended up with only 8 because I can't count sometimes. 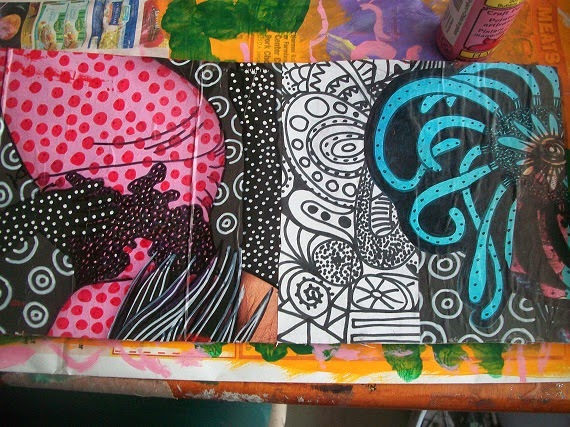 The cover started life as a box that microwave popcorn came in. The front of the cover is a collage of altered magazine pages.
I apparently forgot to turn the cover over and show you the nice red hue I've painted it with acrylics. 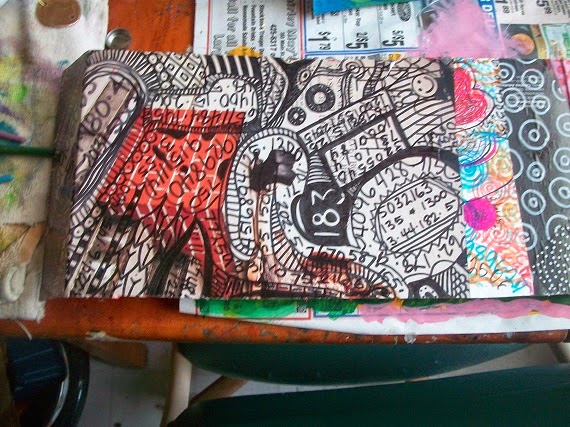 All the book parts are right now is a blank canvas to put something on. I'm thinking it needs a herd of zombie cows or such. I really don't know what this book will end up being about. I can't put it together till I figure out if I will finish it or if I will offer it as a ' add your own flair' blank book. It's laying on the kitchen table waiting for the next phase. 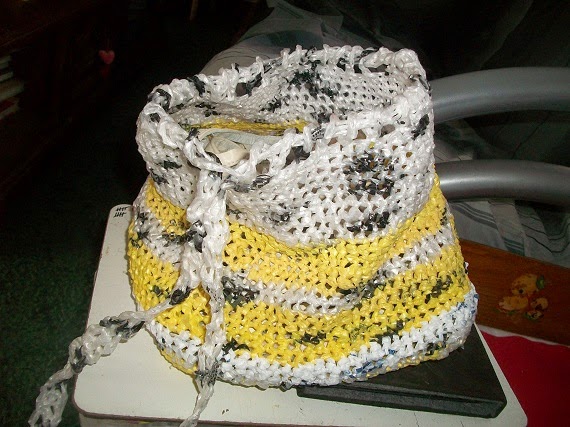 I've been playing with plastic yarn. Plarn. It's just plastic bags cut into string. That sounds a little daunting, but it's actually quite easy to do! I made this bag out of 25 plastic grocery bags in a matter of hours! It is sitting on my lap desk so you can see it is a good sized bag. I didn't measure it so I'm not sure about the measurements. I put all the seams from a leather coat into it after I cut the leather coat apart. You'll see that leather coat someday when I get something made from some of it. 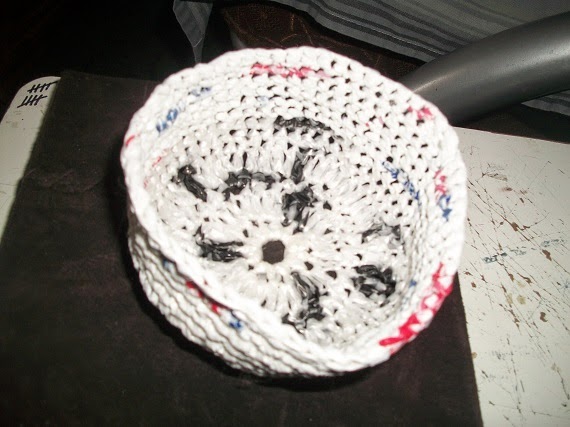 I used a smaller hook on this little crocheted basket. This yarn doesn't make very good baskets. They're quite flimsy. It makes excellent bags though! 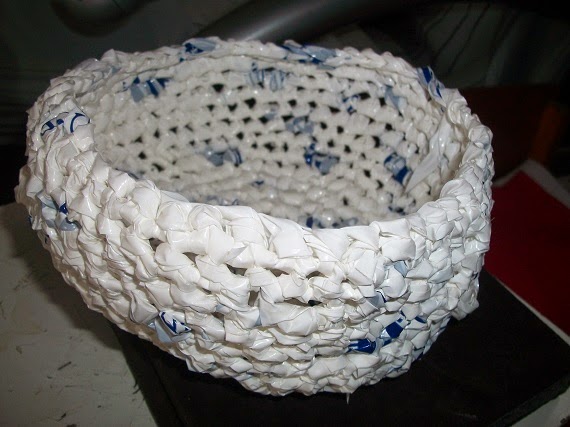 This plastic basket is made from a different kind of plastic bag. This is much heavier plastic than the grocery bags. I have thousands of these bags! This one measures somewhere around 6-7 inches across...maybe 4 inches deep. I'm guessing here because I did not measure it. It is a nice sturdy basket! 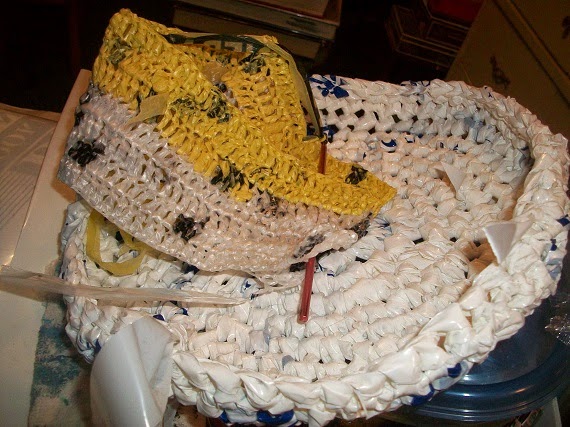 I have two more plarn projects in the works!
I think the yellow and white one will become a rug for in front of the door. The basket beneath is quite a bit bigger the one above. I need to make more plarn from plastic bags before progress can commence with these two projects. 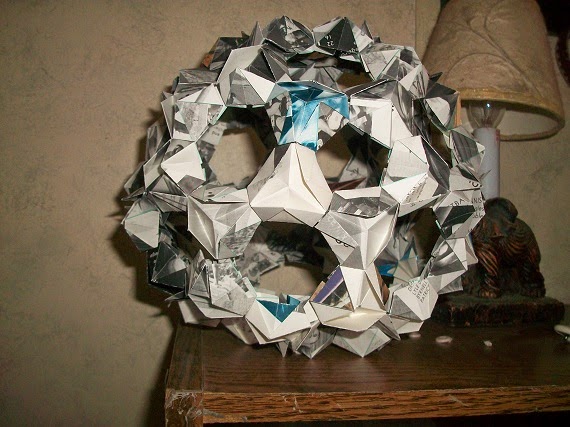 Last post you saw the first soccer ball sized bucky ball and some units to build another.....
Here's the result! This one needs some glue work done to it, as I've noticed over the few weeks it has sat on the shelf, it is beginning to sag on the bottom. 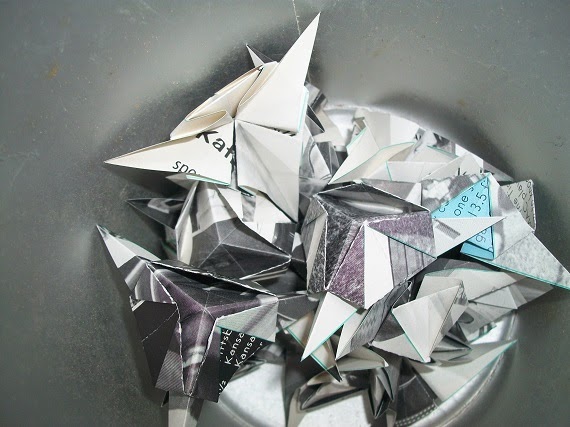 Perhaps the next one will turn out as well as the first one from the last post. It's sitting on a shelf too and I've noticed no sagging in it.
We are still using paper from a 1974 Fort Hays State yearbook. 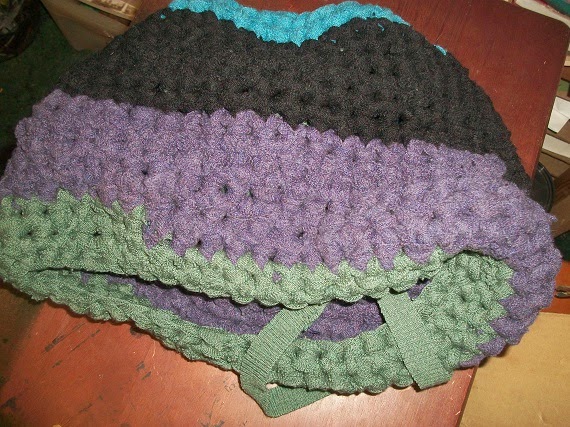 This thing is no longer. 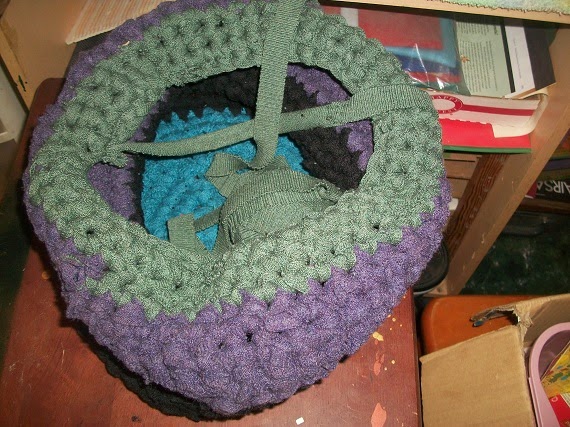 It started life as four different cashmere sweaters. I cut the sweaters into yarn and crocheted what I thought would end up being a basket. What I got was a hot mess! 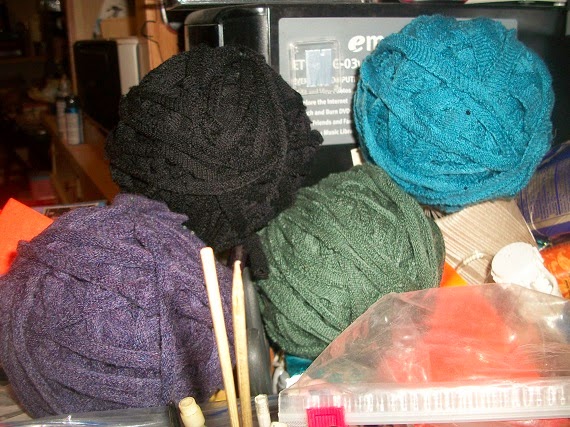 It now looks like this a second time!
I think the individual colors will become a separate basket or perhaps a tablet cover. I don't really know at this point.
The cashmere sweaters are very very soft! 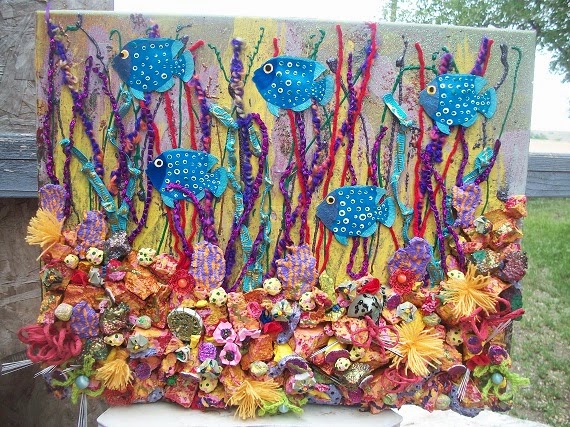 I started it a couple months ago. I don't remember if I blogged about it or not. I may not even have the right number of which fish picture this really is. It's the latest one!
I'm pleased with the outcome thus far. 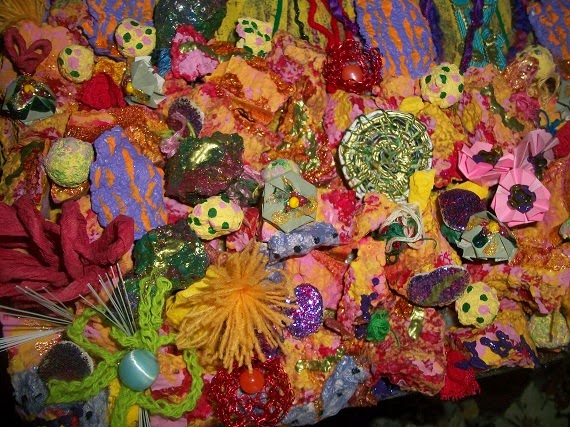 It has a few different elements on it. The pink things on the right hand side of the picture are extra units from the very first successful bucky ball I ever made!
The green disk was an experiment that didn't quite work like I thought it would. It works great as part of this picture.
There are three different things ....the purple and orange blobs, the fat purple worms with black dots and the yellow spotted balls are all paper clay painted with acrylics. I made those shortly before going to my son's house in April. Ma said one of the cats dragged a few of them into the livingroom from the cutting room and she didn't have a clue what the heck they were until she discovered the others in the cutting room on the table. They weren't painted at that time. There are still some others to use but I don't know if they'll end up on this particular fish picture. 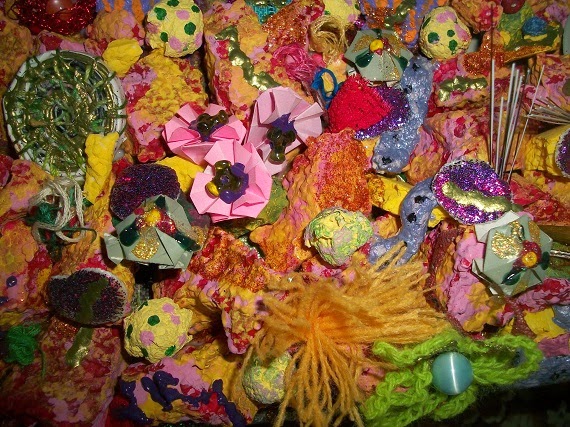 I crocheted the green yarn flower. the bead in the center is glued on.
There are two hexagon shaped green things in there. Those too are units from unsuccessful bucky balls. Small bucky balls, not soccer ball size.
The yellow yarn things are just yarn wired into a tassel and then cut short and flared.
All the pink, yellow and red rocks are styofoam chunks painted with acrylic paints. 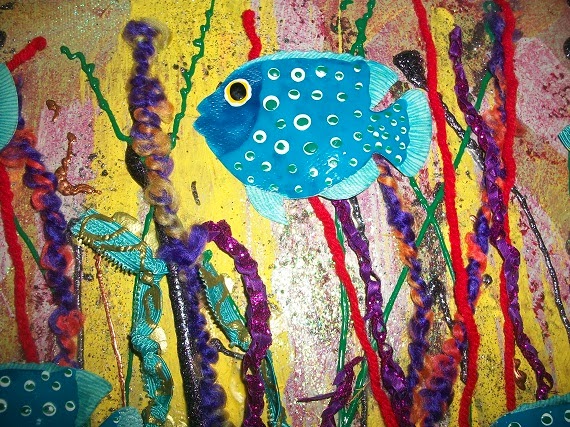 The blue fishes are all cardstock painted with fingernail polish.
The background was fun to paint. I just picked a color scheme and started slapping on the paint! 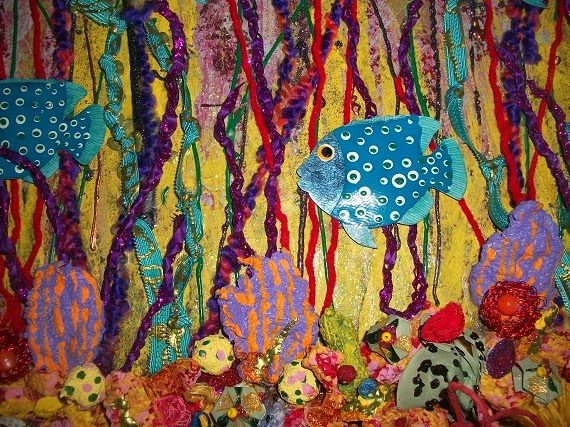 The background strings are a variety of yarns, elastic and strings. I crocheted the purple strings from glittered ribbon. The blue is elastic with green fabric paint drizzled on it to soften up the hard edges of it. I tied knots in it as well. The red strings are just regular acrylic yarn. There's some purple yarn in there as well. The green strings are puff paint.
I crocheted some copper wire into a cup shape and glued an orange bead into the center...that one is on the right hand side of the picture.
The bright red 'bud' thing beside the copper cup is elastic lace wired into a rosebud shape.
There's just all kinds of stuff on a fish picture! 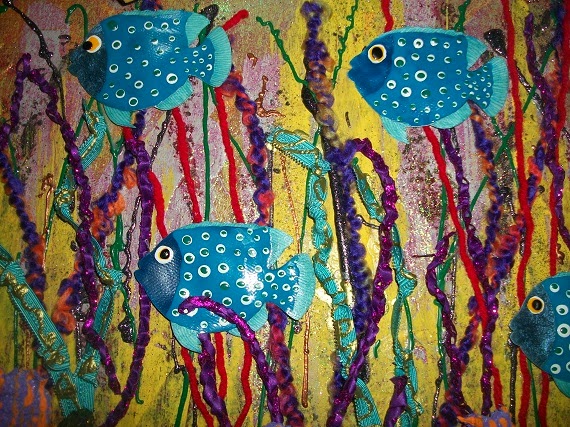 It still needs a few strings over the fishes to give the illusion that they're swimming among the seaplants and then it will be done. I intend to enter this one in the county fair in August this year. 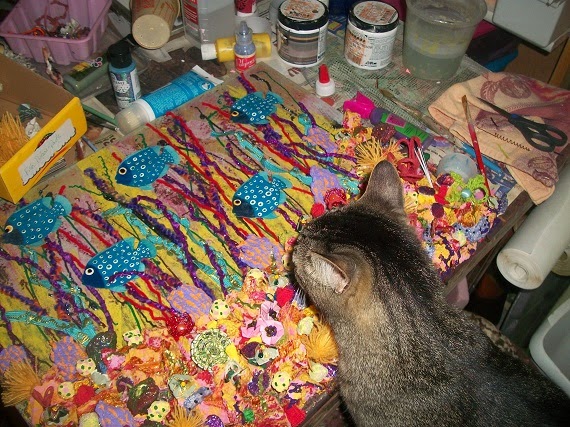 Here's the resident art critic giving the fish picture a once over. Murray concluded that yes it is a picture with fish on it. 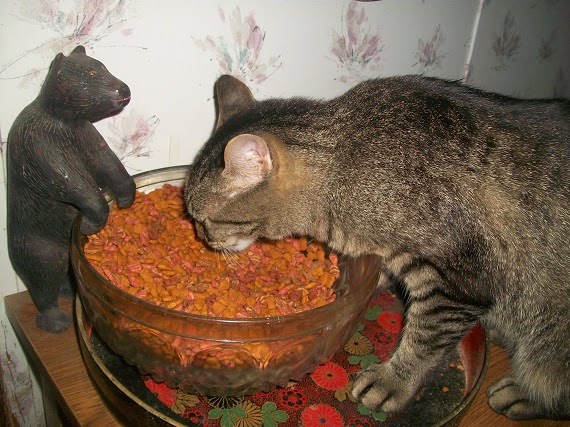 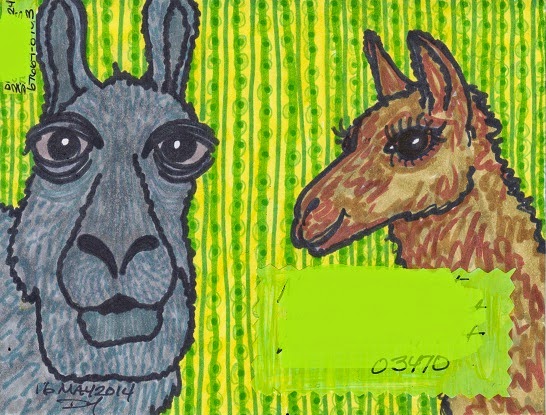 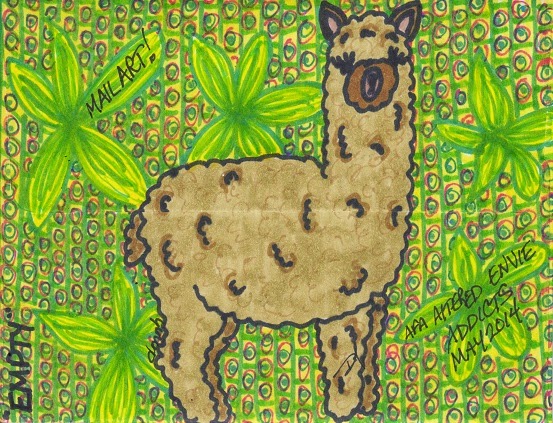 There's an alpaca on the backside. I'll mail it off on Monday. 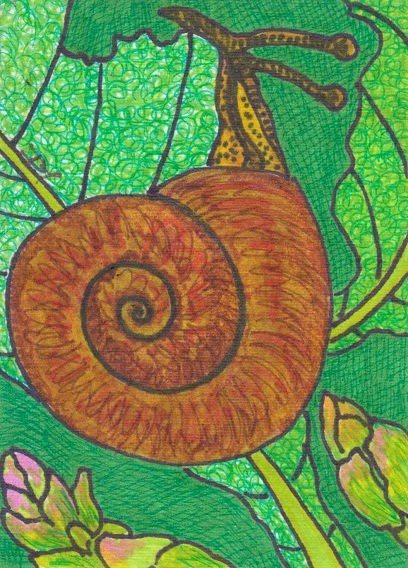 Leaf eating snail
ATC
markers on cardstock
the snails are for a swap. I still have one more snail to draw. Gotta get on that! These are due early June and June will be here before I know it! 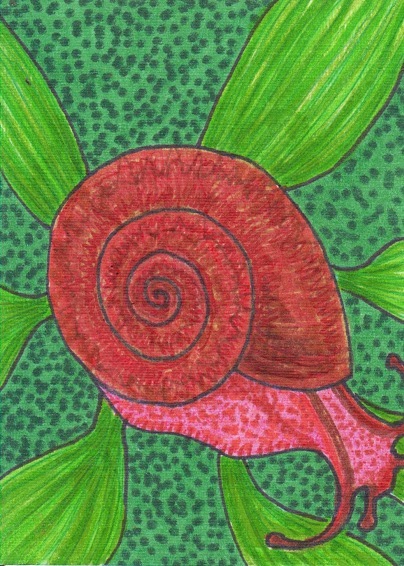 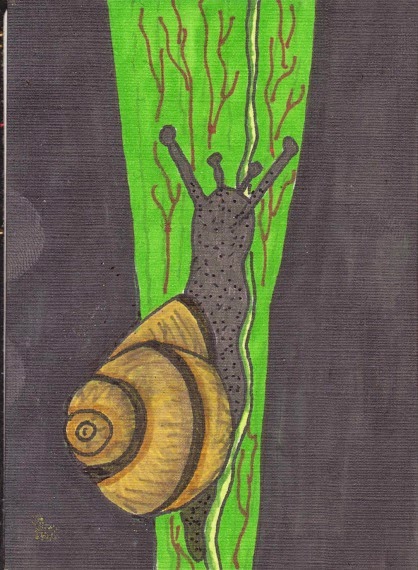 Snail on a Pitcher Plant
ATC
markers on cardstock

I got all these buttons off that leather coat.  My sister gave me the coat. It had a LOT of leather in it! It was a knee length woman's coat. It also had a boatload of seams! I really thought there were 10 buttons on that thing but I've hunted all around where I cut the coat apart and I've yet to locate the tenth button if there was one.

I guess that's it for now.
I'm working on a few things at the moment and everyone knows I'm like an ant gathering stores for the winter... I go off in all directions and find something new to do every other day or so.
There's always more to show!
Thanks for sticking out the ramblings of an old woman!
Remember....
be good to one another!
It matters!
Peace
831