A Cold Thursday, An ATC and Another Boatload of Inchies

I'm settling in with my first cup of coffee for the day. I'll have drank at least a whole pot before the day is through. What is on the agenda for the day? Art, as usual. The dishes need done too. I tried doing trees and monochromatics yesterday but everything I tried looked like a five year old had been playing in the paints so I gave up on trees and monochromatics. I did get the ladybugs done for one of my red chunky pages but they've yet to be put on a page. 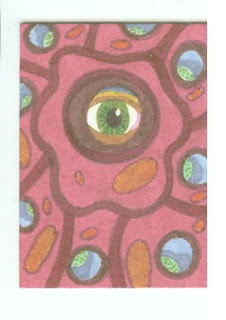 This ATC was done last week. It is sharpies on illustration board. I was on an art safari on the internet and came across this painting by Esther Albone with the title of "You and Eye". Her painting is done in oils and is square (not sure the size of her's but mine is 2.5 x 3.5 inches). I thought it was really cool and decided to do my own rendition of it. It looks a lot like Esther's but it has elements of my own in it as well. I don't so much consider it an original because I did swipe the idea for it. It turned out rather nicely nonetheless though. She explains the painting as being the cells of one's body and how we are connected to ourselves through our eyes. Or something like that. She said it a lot more eloquently than I can this morning!

Fred has been out and wanted back in already this morning. I got up about an hour ago. Need to call the vet for some worm medicine. Someone (cat? dog? your guess is as good as my own) left a pile of puke on my bedroom floor full of round worms. It was rather disgusting! Should probably give everyone a good dose of the worm cure.
I have two cats sitting here in the deskroom watching me type. Doob wants to get on the desk real badly! She's sitting on the chair next to me, nudging my left arm with her nose every now and then. Miss Blue is asleep on top of the monitor. Billy's asleep in the livingroom with Fred on the sofa. Bill acted like he wanted out a little while ago but when I opened the front door, the sunshine blinded him and he ran back into the kitchen with other plans for the time being.
Just to look outside, it appears to be quite warm out there. But open the door and you'll feel the cold. There's a slight breeze out there making it feel even colder than it is. I didn't look to see what the thermometer in the livingroom is saying about the temp outside. It's about 57 inside though.
I got all my inchies scanned yesterday afternoon. I took them over to my sister's house to count them by laying them out on her diningroom table. I did 67 inchies in the last few days. 12 of them yesterday. 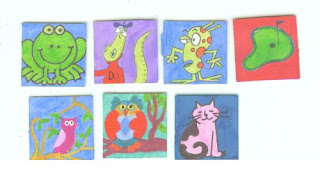 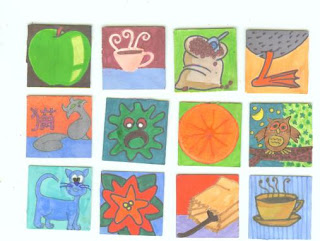 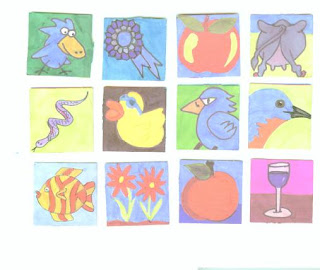 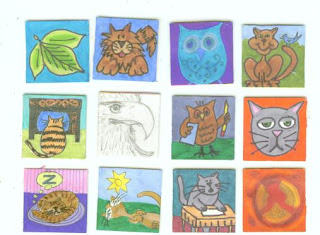 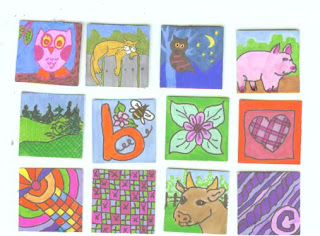 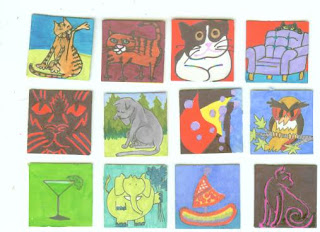 Some of them turned out really well. Some of them are alright and a few of them suck big time. My favorites from this batch are the gray cat washing his face, the yellow cat licking his leg, the yellow cat asleep atop the fence, the green lizard wearing a red shirt and the green martini.
I don't have near as many inchies done as I thought I had. (It is known fact I don't know how to count!) In the box where I keep the completed inchies, there are 249 of them. I counted the number inchies I did awhile back for a swap among the 1000 goal, but those cannot be counted cause I don't even have some of them anymore. Still have no idea what the devil I'm gonna do with 1000 inchies.....guess I'll figure that out next year when I have 1000 inchies to deal with.
I started a new book last night. I forget the name of it. It's about the old west; wagon trails, ghost towns and the like. It's basically a picture journey but there are almost 400 pages in the book and over half of them are nothing but text! I read 92 pages last night and will read it till I've completed it. It's quite interesting actually.
I will be heading out to the storage trailer later this afternoon to find an easle I'm not even sure I still own....though I don't remember getting rid of it either. Has to be out there somewhere! It used to sit in the corner of the closet here in the deskroom but since I rearranged that closet I had to send it elsewhere. I'll find it. Maybe RJ can point me in the right direction. I'll ask him this evening if I don't find it this afternoon.
I'm going to Pburg for supper with T, RJ, Brenton and T's mom who is visiting for a few days.
I could have gone on a roadtrip Tuesday night but I declined the offer. Not cause I didn't want to go! I'd of jumped in that van in a heartbeat if I trusted the damn thing to get me 100 miles down the road and back home again. I could use an adventure about now.
I really don't know what I will get accomplished today....whatever it is.....I better get cracking on it! First thing is to go across the highway and get yesterday and today's snail mail out of the big black mailbox. Perhaps there will be something good in there! I need to pay the electric bill and the telephone bill today also.
I do hope all is well with John. We've not heard from him in some time on his blog. I hope he's well rested and things are going good for him! Be Well, John!
Whatever you got on your agenda today, I hope it's a good day for you! Go collect yourself some hugs. I'll come yak at you all another day!
Peace
831
Posted by Donna at 10:00 AM