hello All!
I've been away as you all know. No good reason for it really. I just haven't had a lot to talk about that seemed to be of any importance to anyone but myself. So no talking is good sometimes!
I have been busy here of late as you will be able to tell from the pictures I'm sharing this cold early Saturday morning! 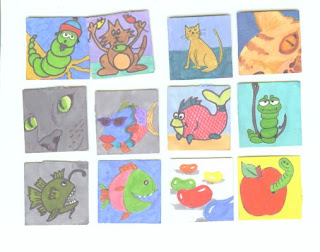 I decided it was time to do a few more inchies to get to my goal of 1000 for the year. I'm up to 294 with this set of a dozen. I did the little yellow cat last week. Just couldn't get into inchies that day. The others were all done in the last few hours. I think the jelly beans are my favorite of the bunch. Then the grey cat. Then the green angler fish. A few silly fish this morning. I like the one with sunglasses on the best of the silly fish. You'll see more inchies in the coming weeks. 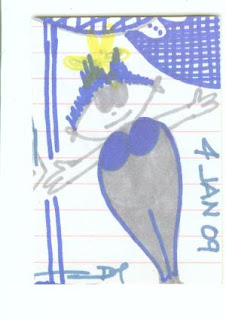 When The Fat Alien Sings- ATC sharpies on steno paper backed with recycled chipboard. All the aliens in this post were done on the 4th of January at my sister's house early in the morning while having coffee. I used what markers were available to me at Susan's house. 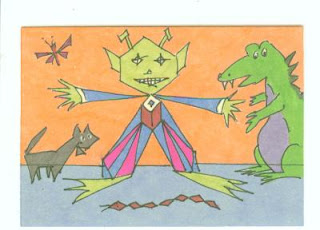 Ted and His Pets- ATC Sharpies on thick cardstock. All the ATCs in this post unless otherwise stated are on ivory colored thick cardstock that came from a set of flashcards I bought at the thrift store for a dollar. There were two boxes of them with more than 200 cards which gave me total of about 600 ATC blanks. It was a cool find! Ted and his managerie were drawn at the Branding Iron II cafe in Pburg on Sunday, 22 March about 8 in the morning. I kinda like Ted, he's got personality, I think. 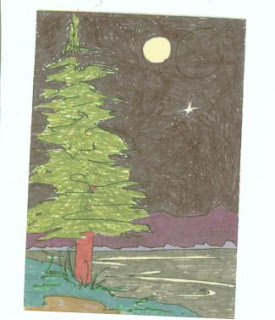 Sunday Mornin' - ATC done on Sunday 22 March at the Branding Iron in Pburg. Sharpies on ivory colored heavy cardstock. I screwed this one up but scanned nonetheless. Susan says she can't see where I had originally put the moon. The coloring of these done on that Sunday were done the following Monday. I can see where the moon was originally placed. Perhaps you can too. I won't trade this one just cause it isn't quite right. 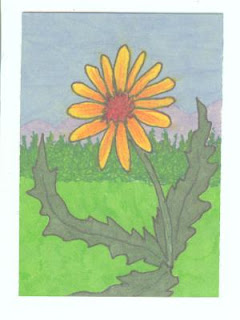 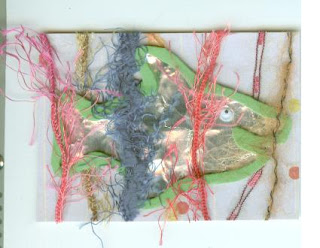 Silver Fish in The Corals- ATC I made this one for the CAT the weekend of the 14th. Scrapbooking paper background, silver foil paper from a cigarette pack for the fish, foam sticker fish shape, googly eye and various fibers. On thick cardstock from those flashcards. This one is traded. 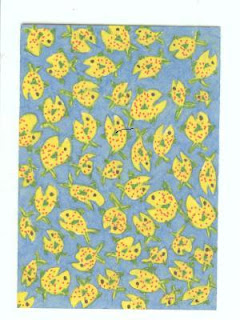 School 53- ATC- Sharpies on thick cardstock. Made this one yesterday. 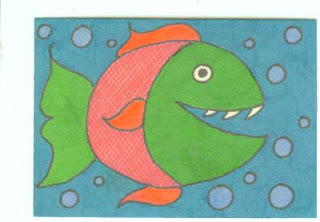 Rexford ATC- Don't ask me where the name of this one came from. My mind goes blank on naming these ATCs sometimes and this one eluded me. Rexford was the first thing I thought of, so Rexford it is! Sharpies on heavy cardstock. Made yesterday. 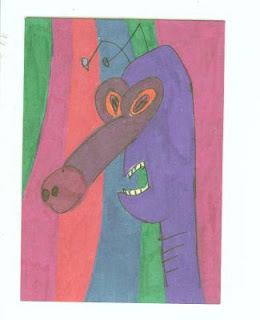 Mr. Phallus ATC- Just me being silly at breakfast last Sunday morning. I doubt I'll trade this one, but I'm putting it up for trade nonetheless. 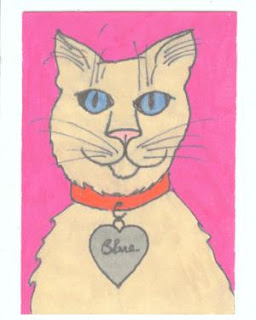 Miss Blue ATC- sharpies on heavy cardstock. I did this one early this morning. Looks a little like Miss Blue....not the best cat I've ever drawn by any means but not terribly bad either. This one is up for trade. 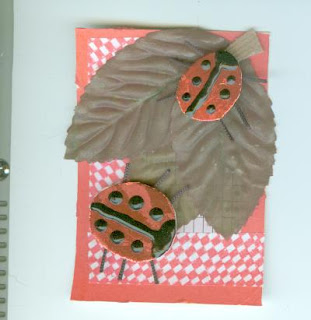 Ladybug 2 ATC- This is a remake of an earlier version of this card made for the CAT this month. It is traded. 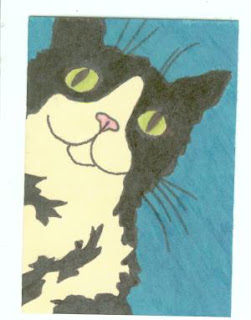 Hello! ATC- Sharpies on heavy cardstock. This one is up for trade. 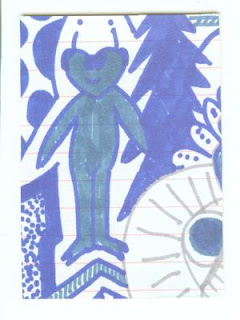 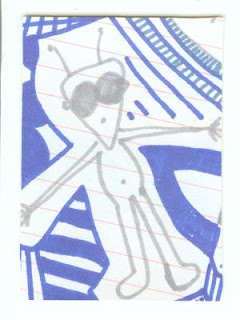 Gorfus From Morfus ATC- sharpies on steno pad paper backed with heavy cardstock. The theme the morning the aliens were drawn was (are you ready?) aliens! 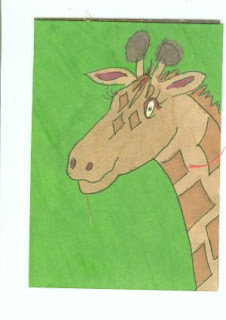 George The Giraffe ATC- I'm so original sometimes on these titles~! lol (Just kidding!) Sharpies on heavy cardstock. That red string you see hanging out up there is not actually attached to the giraffe. It's a string off the fish up the ways a bit. This one is for trade. 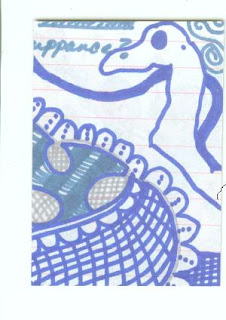 Comeuppance ATC- not sure if 'comeuppance' is even a word! That's the word written across the left top of the ATC. All the aliens were drawn on one sheet of paper and cut out only yesterday. This one's up for trade too. 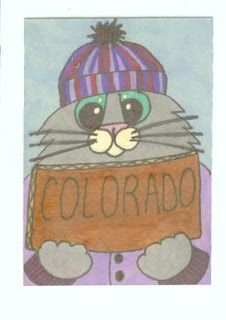 Colorado Bound ATC - (though why any self-respecting cat would venture to Colorado at the moment is beyond me! Even with his coat and hat the chap is gonna be a cold cat there!) Sharpies on heavy cardstock. I borrowed this idea. The cat in the picture I got the idea from was headed to Mexico. He was wearing a sombero and serape. And he was an orange cat. 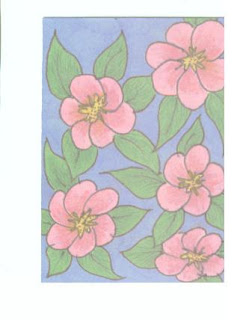 Breakfast Flowers ATC- Sharpies on heavy cardstock. The picture was drawn at coffee on Thursday the 26th. It was colored in later that day. This one is up for trade. 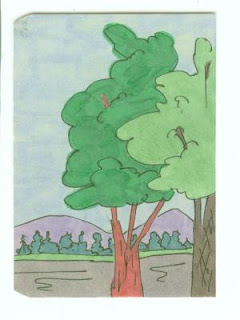 A Sunday Stroll ATC- Sharpies on heavy cardstock. Drawn at coffee on Sunday, 22 March. This one is up for trade. 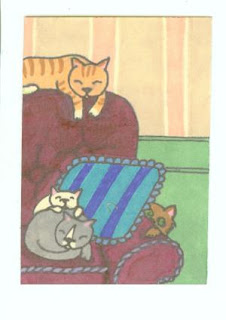 A Chairful ATC- Sharpies on heavy cardstock. Drawn yesterday. This one is up for trade.
Not much happening in my neck of the woods. The weather gurus promised us a hella snowstorm but that never materialized. Not a flake of snow in sight! I didn't really want a blizzard but we really need the moisture. Everything is so dry!
My quitting smoking campaign has resumed. The price of smokes went up by 80 cents a pack~! They justified that increase in taxes to help pay for healthcare for kids who don't have health insurance. I'm not sure it's fair for smokers to pick up that bill. That's one of the reasons I am quitting. The others are all health related and can only be good for me. So I'm trying very hard to not light up the fags. Can't afford to buy the damned things anymore either and writing a check for $12.31 for 3 packs of smokes that only last me three days deters me on that front as well!
Brownie dog moved on to greener pastures. He left as abruptly as he had arrived. Susan went out and bought a big bag of dog food for him and Evelyn had accepted him as a second to Fred. Fred will always be #1 with Evelyn. Not sure where he went off to, just hoping someone else took him in. It's been a bit chilly here of late.
You all have a fabulous weekend. Stay warm where it's cold out and cool where it's way too warm!
Get yourself a few hugs this weekend too!
Peace
831
Posted by Donna at 7:25 AM