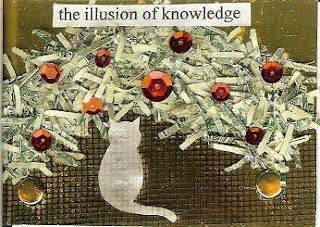 That is the only picture for today. I just can't think about pictures and which ones to show you all this afternoon so we'll stop at one and call it good! I made this ATC back in Feb, I do believe. To be certain of that date, I would have to drag the only one I kept out of the notebook and that sounds like too much work for me! I made eight ATCs that all look remarkably like this one. I liked the quote and it goes with the elements on the card thusly: money isn't knowledge, though there are those who think it makes them smart. Red is the color of blood and blood is too often shed in the name of money and those doing the shedding of blood aren't near as knowledgable as they would like to think they are. The cat represents wisdom. Money don't make you wise either. The metal window screen and the brads are there just to hold things together. I put a gold background behind everything cause gold is associated with money, with greed, with the illusion of knowledge. These ATCs all traded quickly... I made the first one, posted it for trade. It traded within moments and then the requests started coming in for more of this card! It was a big hit!

I'm sitting here in my pajamas still, drinking coffee and talking to whomever comes along. Hope I don't bore you too bad! This blog, is some days, just for my benefit to help me remember what the devil I need to get done! I'm working on my Christmas Chunky Pages again today. They have got to be mailed tomorrow, at the latest, to arrive in Canada by the middle of November! I have three fronts done completely and another front half done. The backs of all four aren't even started yet! I painted the fronts, not sure what I will do with the backs. I thought I had a lot more christmas stuff gathered for these book pages than I actually have. Had to change the plans a bit! I figure three hours of sitting over there at the table and I'll be ready to send those.

Come Saturday or Sunday I have got to drag out the hotplate and get three ATCs done. Encaustics. Looks like I'll be smelling up the house with that endeavor cause it's a bit too chilly to my liking to be doing those outside. Melted crayons stink! And melting crayons is what I will be doing for those three ATCs. They need to be in the mail no later than Monday to get to England before the middle of November!

Time got away from me on those two swaps.

I haven't been feeling well for a few days. The old body has gone into rebel mode is all. I'll get over it, just have to deal with it while it's here! The fibro kicks my butt sometimes and there isn't a thing I can do about it but deal with it!

I did all the laundry yesterday and the day before. Six loads. I still have a load in the dryer that needs taken care of. I'll get to it before the day is out. Then I have to put all those clothes in the closet and in the dresser drawers where they belong. I went through all the mail yesterday as well. That was a feat and a half! I keep telling myself I need to take care of snail mail on a daily basis but somehow that never happens and it piles up on the desk in the livingroom for weeks at a time. I take out what looks important on a daily basis but the rest of it just sits there till I get around to doing something with it! It's a terrible habit and I need to correct it!

Fred is keeping me company here in the deskroom as I type out this blog entry. He's asleep on the floor behind my chair, snoring to beat the band. He tore a hole in the sofa cushion early this morning, digging at it with his feet. He woke me from a dead sleep with all the noise he was making doing that. I can't make him stay off the sofa as he's been allowed on the sofa since he was a puppy four years ago. He apparently doesn't like our 'new' sofa. 'New' in that it isn't NEW, but second-hand. I didn't pay anything for the sofa but I kind of wanted it to stay nice for awhile...I will have to disguise the holes in the cushions now. I put a rug over the cushions to prevent that dog from ruining the other cushion. Now he's ruined both of them. The boys and I dragged out a heavy rug/throw yesterday in the shed. RW laid it out flat in the burned house so the wrinkles would relax in it so I can put it on the sofa. Guess I better go check to see just how flat it's laying today so I can put it on the sofa before Fred really destroys the sofa! Stupid dog. I can't be mad at him for long. I can't be mad at anyone for very long. That is one of my downfalls...that inability to stay angry for any length of time. I know that anger is a wasted emotion cause the one you direct your anger at doesn't feel it near as strongly as you yourself do. I don't get angry though, very seldom and it's over with as quickly as it came on. Fred got a good tongue lashing this morning when I stumbled to the livingroom to make him leave that sofa alone! He followed me back to the bedroom and slept on his blanket on the floor till about 9 when he woke me up again to be let outside.

Th weather is pretty nice out right now and I could take that hotplate and crayons outside if I didn't need to get those Christmas Chunkys done. What I really need is a shower and a nap! I have no energy today. I'm hurting from the top of my head clean down to the ends of my toes! I'm hungry as well. Guess this is it for the blog entry today! I'll come again tomorrow, maybe, and talk to you all then.

Have a terrific Thursday and go get you some hugs today. I don't think any hugs are forthcoming for me today. I got a few yesterday to hold me over though so I'll be alright! :)

Here's a big, spooky HUG all the way from Malaysia :)