A Little Art, A Lot of Sleep and A Smelly Cat

I've been away for a few days...
We'll start with art today cause that's how the pictures got uploaded. I really haven't done any art in the last four days, more on that later. 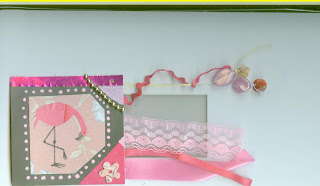 Here we have the front and back of a chunky page that I noted as "pink flamingo" in my picture files. I don't really name Chunky Book pages. Both flamingos are freehand cut, the top one from a catalog page (pink dress for sale) and the bottom one from a piece of pink cardstock. Legs and beaks are drawn with a sharpie marker. Nothing really special about them, but I like the effect of the whole. There's pink lace, rickrack, ribbon, beads, papau (I'm not sure that's spelled right) shell beads and pastel colored string to hold the beads on. Lot of different kinds of paper on the front side (top picture) along with some plastic bathtub chain and a chipboard flower cutout. The pink dots are acrylic paint. The backside (bottom picture) is tissue paper, marbled construction paper and cardstock. Both are adhered to recycled chipboard from food packaging. 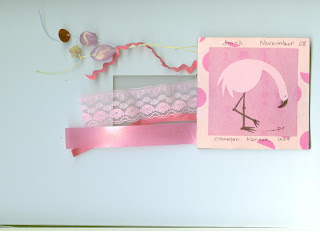 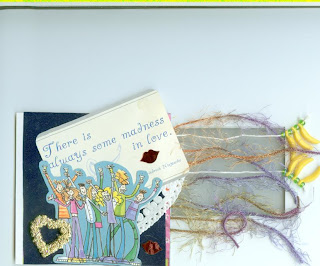 There is (indeed) always some madness in love! This chunky page is made from a birthday greeting card, gold plastic heart charm, red sequin lips, paper doily, blue velvet background and a playing card with the quote on it. Danglies are eyelash yarn and green glass beads and plastic banana beads strung on a string from Fred's dog food bag. (I'll use just about anything in my art apparently!) It is all adhered to recycled chipboard from food packaging. (Hot chocolate for this one, I do believe.) 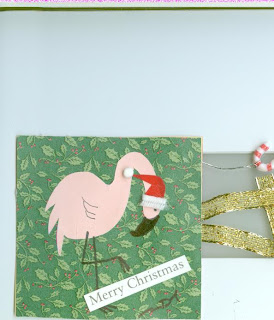 Merry Christmas Flamingo. Only I would put a Santa hat on a flamingo! (Or maybe not...) Here we have another Chunky page (that's all you will see today, Chunky pages) made after Christmas. The flamingo is freehand cut from pink cardstock, the hat is cut from a velvet ribbon, a tiny white pompom and a piece of pipe cleaner. Bird's legs and beak are sharpie marker. The background is wrapping paper. Danglies are sparse on this one! Gold wired ribbon and a plastic candy cane that came in a Message in a Bottle. The text is from a Christmas card. All of it attached to recycled chipboard from food packaging. (Probably hot chocolate again. I go through that stuff like it's going out of style!) 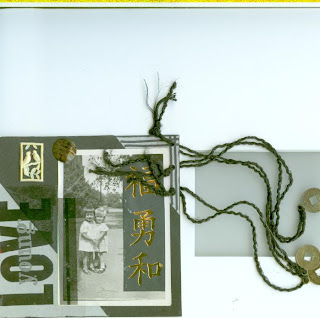 This is my favorite Chunky page I've made this year. It will go in my Black and White Chunky Book as soon as I get enough Black and White Chunky pages to put a book together! The elements of this page are a clear sticker that says Young Love, a vintage photograph of two little girls (not sure where I got the photograph from, I had two of them of the same two little girls), oriental writing on scrapbook paper?, I'm not sure if that is Chinese, Japanese or just what kind of writing it is, nor am I sure if I even got it on the paper reading the right way and I've not a clue what it says either! I needed something to cover up that side of the photograph though cause there's nothing under that piece of paper but a shadow of another person standing near the girls. Up in the left-hand corner is a small (1/2 x 3/4 inch) plastic (might be ivory?) dodad that came off an old bracelet that was broken. The round thing up there on the corner of the photograph is a papau shell bead. Underneath everything is silver paper and black paper. The danglies are black cording that was unraveled...it was originally a thick cord with three layers but it wouldn't fit through the holes in the coin charms so I unraveled it so it would. And again, it's all attached to recycled chipboard from food packaging.
A Lot of Sleep
There has been a lot of sleep going on at Donna's house. Mostly by her! Fibro has kicked my butt royally this past week! I've neglected everything in my life because I've been asleep most of the week! I need to call the phone company, the pharmacist and some other folks and rectify what was screwed all up because I wasn't awake to take care of the things that needed to be taken care of while I was asleep. I slept all day and was awake when everyone else was asleep! I don't think the sleeping spell is over with just yet either. Good thing it's now the weekend and I've no obligations this weekend.
I need to call the phone company cause someone forgot to pay the bill earlier this month and they shut the danged off! Not really a problem.... I was asleep anyway and couldn't talk to anyone even if they had called! And those that needed to talk to me called me on my cellphone instead anyway. Guess the others, if there were others, will just have to wait till Monday when I can get the phone turned back on. Not to worry! It's all good! 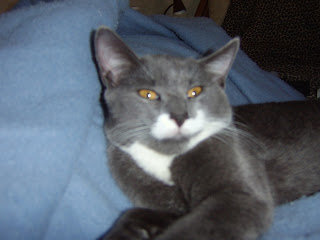 It's all good except for this stinky cat! That's Billy in the picture above. He tangled with a skunk about sundown on Friday (today). Fred was standing at the front door barking to be let in so I opened up the door to do just that. There was Billy standing on the top step with Fred behind him. I opened up the screen door and was clobbered with an awful odor. I hesitated to let either one of them in but Fred doesn't take NO for an answer and he just barged his way around me to come in the house and Billy followed after .... that stench followed them both. I sniffed the dog thinking for sure he was the smelly culprit but he just smelled like a dog. That cat went straight to my room and jumped up on the bed. I smelled him and about passed out from the stink. I grabbed him off the bed and threw him back outside. (Not literally...one shouldn't throw their cat anywhere.) I took the Odorizer (eliminates foul odors, works great too!) outside to spray the cat down with it. He didn't appreciate my efforts to make him smell decent. I got him smelling much better though and he's now inside again. I can still smell that skunk smell every now and then though. My blankets are in the washing machine at the moment. I'm hoping that lingering smell will go away when I mop the kitchen floor tomorrow. I sprayed Odorizer all over the house in hope of eliminating the nasty smell. We'll see what happens.
I called Ma to ask her what to do with that smelly critter and she said she knew there was a skunk around cause she could smell it. She asked if I was sure it was Billy and not Fred that had tangled with the skunk. Nope, not Fred! It was Billy! 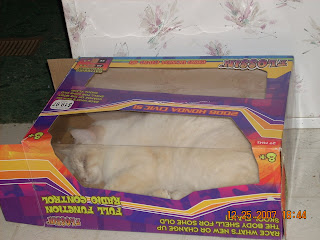 This isn't a smelly cat, just a silly one. That's Miss Blue asleep in a toy car box Christmas Day 2007. At the moment she's asleep under my desk where my feet go. She gets kicked a lot sleeping under my desk. I don't kick her on purpose, mind you...she's just in the wrong spot. If she would sleep over the side instead of right in the middle, she wouldn't get in the way of my feet. I didn't show you all Doob or Fred this time...Fred and Doob are both asleep on my bed at the moment.
I have whimsical cats to make this evening and I better get started on them before sleep invades again. I can feel the old eyeballs waining!
I'll be back again tomorrow, maybe the next day, all depends on what occurs in the meantime.
You all have a fantastic weekend wherever you might be!
Peace
831
Posted by Donna at 10:26 PM

That's Chinese for sure. The first two characters, pronounced as fu yoong, appears to be the name of a guy, with the meaning, good luck, and brave. The third character, pronounced as her, means and. So perhaps, the whole thing is this guy and...

Thanks for the translation, John! I'm glad to know it is somewhat appropiate for the images on that page. So glad it doesn't say something very inappropiate! Perhaps those two little girls were brave and needed good luck to make it to adulthood. I don't know who those little girls are or if they even grew into adulthood..
I think the paper with the Chinese characters on it came from another artist I had traded with previously. I'm pretty sure it is scrapbooking paper though. Which means it was made for sale. When I trade art with others we sometimes add other bits and bobs to the envelopes we're sending the art in. It adds to our stashes of art fodder. We get things we wouldn't normally acquire on our own.
Oriental writing has an artistic appeal even if I can't read the characters! I have an envelope full of oriental writing. Again, no clue if it's Chinese, Japenese or what it is. It is for use in my collages. I'd be most appreciative if you'd translate any other pieces with Chinese that I create in the future...if you're so inclined anyway!
Thanks muchly, John!