Some Presidents and a Bit of Chatter 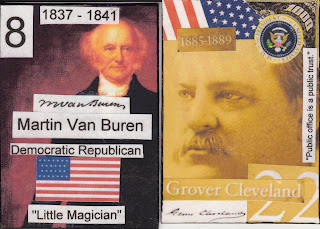 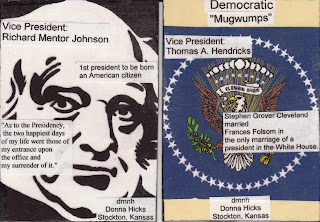 I made these two Presidential ATCs for a RAK over at AFA (link in the sidebar on the top left). They are simply collage. sealed with glaze. I typed up the words in Word Pad and printed them off. I'm thinking a whole set of these would be totally cool! That is where these two will end up...in an entire set done by many different artists for a fellow member's mother who is a History Teacher in Texas. I'm quite pleased with the way these turned out. I may do more if she doesn't get enough folks to complete the set. There are still a number of presidents that haven't been chosen yet.
I'm sitting here this morning playing Cave-In over at splashspot and listening to music. I'm about burnt out on Cave-In for one day. I made my highest score today ever though! I'm not sure how folks can get over 900,000 points on that game...my highest score is 360,000some. I keep playing in hopes of upping my highest scores. I was trying to get at least 229,008 to beat my lowest high score of 229,007. I was tired of looking at that score. Well, it's gone now!
I worked on a glue book earlier. The very beginnings of a glue book. I got two pages done. Those presidential ATCs made me want to do something with all the images I had left over from those two ATCs so I decided to make a presidential glue book. I'm still thinking a set of ATCs would be super cool though.
I have a set of trading cards of presidents framed. I believe the last president represented there is Carter though...I've had it for some time. I should go out to the storage trailer and bring it in the house. Though where I'd hang it is another mystery to figure out. In the hallway perhaps? Sure isn't any room in the deskroom to hang it on the wall. It's not a little frame by any means! It will have to stay out there for a bit though as it is buried under boxes of stuff. I know this cause I went out there and looked for it!
I did bring in a small table, a poster to make into ATC envelopes, some really cool play money and a book by Ernest Hemingway, The Old Man In The Sea. I'll be reading it when I finish Treasure Island in the next few days.
I would love to change the message on my message machine but I can't remember just how to do that. I've had the same message for over three years now and people keep asking, "Who the hell is WE?" My message says, "WE can't come to the phone right now..." If I knew where the user manual was I could change that message but I don't know where the manual is or even if I still have it, so the message has to stay the same for the time being!
I told you there would be chatter when I gave this post a title. You were fare warned.
I need to work on inchies sometime before the month is out. I'd like to have at least 500 of them done before the month is out. If memory serves me correctly, and we can't be sure it does, there are around 416 done right now. I'm sitting here looking at the box the done ones are in. It is a tin with a clear window on the top of it. They look so colorful laying in that box! Someday I'll frame a few of them and put them on the wall in the livingroom.
I'm pretty well out of things to talk about for the moment so I'll leave you with this:
The finest clothing made is a person's skin, but, of course, society demands something more than this -----
Mark Twain
Ah indeed it does demand a bit more than just the skin showing. Shame. There is nothing quite as lovely as the human body in its natural state.
You all have a fantastic Monday and don't forget to remember those who gave their lives for our freedom. The cemetaries are filled with flowers as gifts for those who have gone before. I am in hopes my mother-in-law put some flowers on Gary's grave. He's a bit far for me to travel right now to have done so myself.
Go get your hugs! Today they're needed more than most!
Peace (If only peace could be had and then we wouldn't have to put anymore comrads in the ground for our freedoms.)
831
Posted by Donna at 10:16 AM