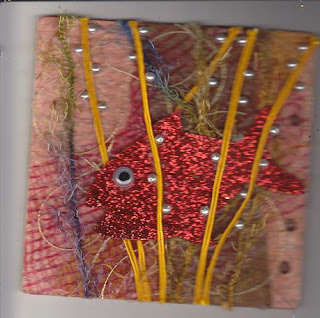 Red Fish Floyd- Chunky pages really don't have names, you know. Floyd is handmade paper dusted with red glitter and googly eye glued on in the appropiate place. The background is a page from a novel that I am altering, red head scarf netting, eyelash yarn, plastic netting from an onion bag, bronze colored silk ribbon, gold thread, yellow cording and fake pearls. The base is a cork coaster from the Wolf Creek Nuclear Plant here in Kansas. 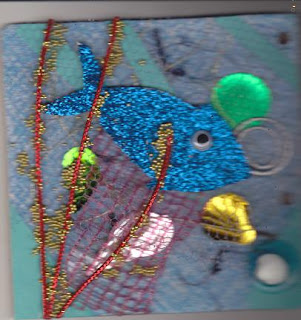 Blue Fish Bruce-- Bruce is a piece of balsa wood cut into a wonky shaped fish and dusted with blue glitter. A googly eye has been glued to him. The background is security envelope insides, several layers of lavendar colored netting, gold thread with four large sequin shapes tied to it, a metal swirl shaped doodad, blue cardstock, eyelash yarn, little plastic disc with a resin seashell glued to the top of it, red cording and gold microbeads. The base of this page is also from the Nuclear Plant. 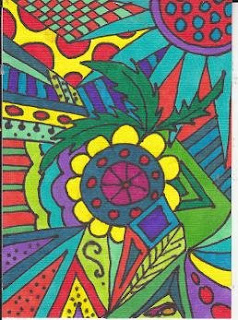 Sleeping Out ATC-- sharpies on linen textured cardstock. This is the only card I traded this weekend. In return for this card I will receive a digital print of a kaleidoscope image of some orange flowers. Very cool. I don't generally trade digital for hand drawn... but I like Kristin's kaleidoscope cards! I have a few of her inchies already but this will be the first ATC kaleidoscope I have from her. 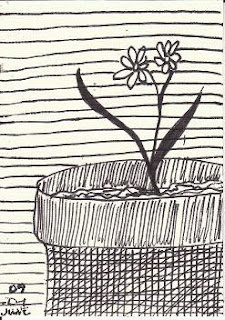 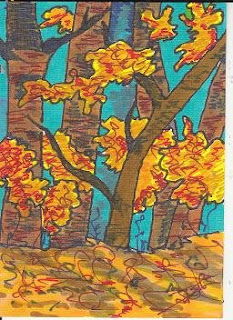 Fall Trees ATC- sharpies on linen texture cardstock. This is a detail of an oil painting I found in my book about landscape artists. The oil painting outshines my version by bunches! 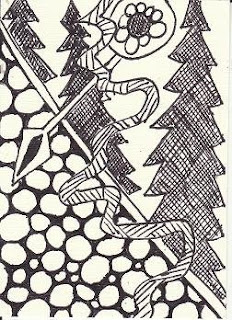 Three Trees ATC -- ink pen on linen textured carstock.
There's the extent of the artwork you're going to see today.
I need to scan some inchies... not sure how many of them are in that little baggie in the inchie box. A dozen or so it appears. I need to do some more inchies!
I didn't say a thing about all the critters in the last post. They are all good and fine. Well, as far as can expected.
Miss Blue is getting more senile by the day. She has decided to live at Susan's house for some reason. When she's home she sleeps in the bathroom... I put on the bed, under the fan this afternoon and she promptly went to the bathroom. It is hotter than the hubs of hell in my neck of the woods and I did not have air conditioning until late this evening...fool cat didn't want the fan on her, I guess. Doob does the same thing though... she sleeps beside the tub in the bathroom.
Bill spends most of his time outside. He ain't no dummy. He knows it's cooler outside than in the house! Even with a/c in the house, he will still spend most of his time outside. Coming in only to eat and MAYBE take a short nap during the day. Billy's a strange cat.
Fred hasn't gone swimming all weekend cause I didn't have wheels all weekend. RW and Lou borrowed my van from Saturday night into Monday. Their's broke down. I think I already told you all that!... so Fred didn't get to go swimming. He seems none the worse for not having gone though. He was conversing with a pack of coyotes last night. They were across the highway, he was in amongst the plum bushes. It was probably around midnight or so... they're over there in the field baying at the moon, howling, making a hell of a ruckus and Fred was on his side of the highway telling them whatfor! I made him come in the house and shut up all that noise he was making! Fool dog can't be arguing with coyotes! They outnumber the boy for one thing. They're a lot tougher than he is too.

RJ informed the temperature on the bank clock at 9:30 on Monday evening said it was 87F out. It must of got up way past 100F then. Even though I slept Monday away, I know it was hot! I took a shower this morning and climbed into bed in the suit I was born in and still sweat like crazy all the time I slept. I'm thankful RJ and his buddy put the a/c in the bedroom and even more thankful they put the one in the deskroom in as well. It is nice and cool in here right now!
Alright! I gotta go drag some laundry to the laundry room and sort the mess so I can start the laundry and have some clean clothes to put on later this morning. I got to make a trip to Plainville and I think I might stop at the courthouse on my way home and renew my registration for the van as well. It expires on the 30th. Gotta see if I have enough money to that though...
You all have a terrific Tuesday! I'm going to give it a good shot!
Get your hugs! Get your hugs! Get your hugs!
Peace
831

It's getting hotter and hotter over here in my part of the world too! Phew... I just hope my body will adapt fast enough to the heat to cut down on all that a/c. Previously, I think I can count with my hands how many times in a month I turn that thing on. Nowadays, it's EVERY SINGLE DAY!