Already the Middle of May....Where Has Time Gotten To?

Hello Readers!
Not much to report here in the art department. I've put the 365 Project on the back burner. Haven't given it up completely but I've not been keeping up with it since the 22nd of April either. I have a few things to show you today, and those will be put on the 365 Project--just keep plugging along with it-eventually (hopefully) I'll have a muse invasion one of these days and will get caught up again. Maybe even ahead of the game! Who knows?
The muse has not been in abundance here of late. I have lots of projects in different stages of completion but nothing has been completed to speak of! Well, except the things I'm gonna show you today.
Might as well get on with that! 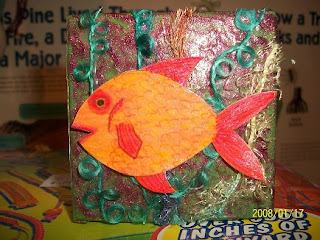 Orange Fish
Box Canvas (Breeze2)
acrylic paint, fibers, watercolor paper for the fish colored in markers
it measures about 3.5 inches square by 1.5 inches or so.
I told you all about the box canvases in the last post. I've got a good amount of little boxes ready to make more box canvas art in the coming weeks. Just need to get the muse in on the game plan!

I was organizing my bookmarked favorites the other night and came across a tutorial for these steampunk pendants made from polymer clay. These two are what I came up with. 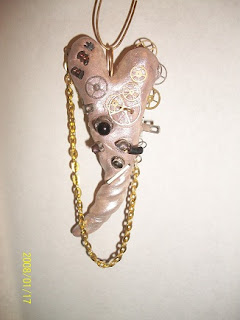 Large Steampunk Pendant 1
polymer clay, different little metal doodads, base metal chain, copper wire, a black onyx stone and powdered eye shadow to give it that color
It needs to be sealed with something. Eye shadow gives a great luminosity to the white polymer clay. I don't have any other color than white in polymer clay, so if I want color, I must be creative in obtaining it. I didn't have much to choose from in eye shadow color department. I could have sworn I had a big case with like 30 colors of eye shadow somewhere. I couldn't find it on my search though so I was down to only three color choices.
All those little doodads are from computer motherboards and the like. 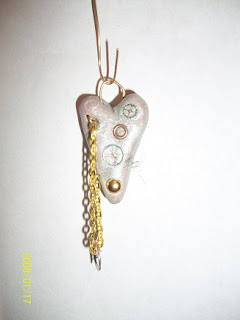 Small Steampunk Pendant
polymer clay, eyelets, watchparts, a brad, base metal chain, copperwire and eye shadow
I made two polymer clay beads the same time I made the pendants. I have a few ATCs that are done that I have yet to scan and lots of projects in the works, like I said. There's the cane, the ART pennant, the house magnets, the goodie box for AFA, postcards, ATCs and the list goes on and on. Too many ideas running round in my head and not enough gumption nor time to complete them all! I will get some of these on this list done in a timely fashion, but postcards and ATCs are an on-going endeavor. I have a fish picture half finished on my easel right now. The fish portion of that canvas is in the livingroom by the recliner where I attempted to fashion that fish out of stryofoam with the heating tool. That experiment failed miserably! Still working on getting that fish to materialize. 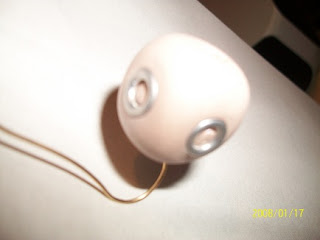 Large polymer clay bead with metal eyelets stuck in it. Not a good picture of it by any means!!! The bead is about an inch around, with a large hole through its center. It has a bit of eye shadow on it as well. 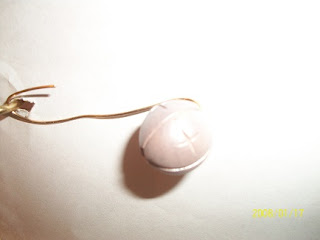 Small polymer clay bead with incised designs and a coating of eye shadow for a bit of color. When you use eye shadow on polymer clay you do so before baking. Then they will need a coat of sealant.
I believe I will use the spar varnish I picked up yesterday at the hardware store on these beads.
ATCs have been in the works as well: 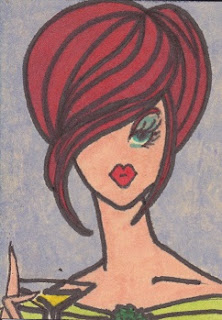 Divina
ATC
markers on cardstock
I forget what day Divina was done. Couple weekends ago though.
That same weekend I worked on my cane.
Here is the finished product. 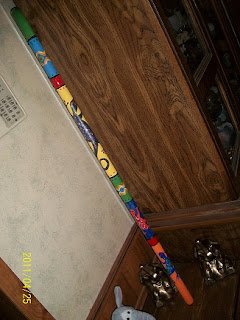 I've gotten many comments on my cane. It was a boring old brown wooden cane to begin with. Now it's a topic of conversation wherever I may roam with it!
These lizard like creatures are along the shaft of the cane. 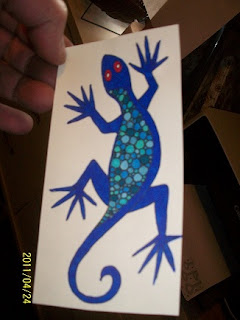 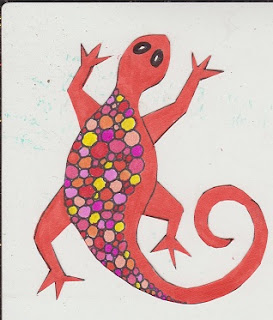 Except for this last one. He was done on watercolor paper in markers where the three above where done on copy paper in markers. I cut them out and glued them to the painted cane before covering them with glitter glue so they'd be sparkly.
I need to do a few touch ups to the crook of the cane and give it a good coat of spar varnish so it will be a bit more durable. I smack it on a lot of things using it. 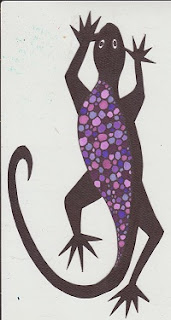 I'm not sure what I'm going to do with the watercolor paper lizard. I've cut him out as well. I think he might end up on the front of book cover. 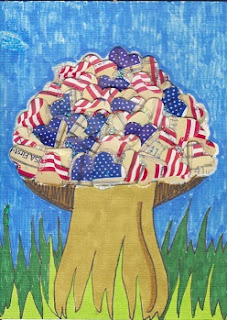 Flag Stamp Mushroom
ATC
15 May 2011
markers and stamp hearts on cardstock
there's a bit of glitter glue holding those hearts on
I punched the hearts out of cancelled postage stamps. I attempted to make those hearts into fish scales but that failed miserably. Seems to be a pattern with fish ideas not coming to fruition these days. A mushroom however, turned out OK. Not a masterpiece by any means, but OK in my books.
And then there's this damned robot ATC. I hate robots! I am never drawing another robot as long as I live! Least that's my story today! I don't draw good robots anyway. Look at that thing~! 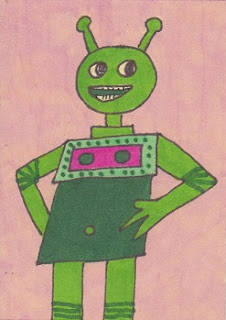 Robot
ATC
markers on recycled flash cards
I had a perfectly good robot ATC go missing enroute to California. I had to replace that robot with another. I drew 16 robots that sucked big time before I drew this one that only sucks. The girl's been real patient with my muse not cooperating with robot drawing and I really need to get this ugly robot in the mail to her. I want to make the trade we made, right. She sent me the cutest little elephant ATC for that robot that went missing! So, I'm gonna send her this ugly robot along with two other ATCs in hopes of making up for what never showed up at ther door. Would tickle me pink if that other robot showed up sometime in the future but I really don't see that happening. 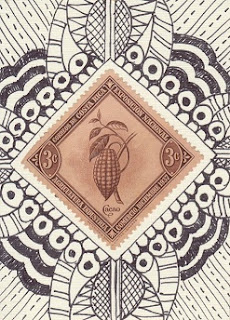 Stamp Zentangle
ATC
15 March 2011
markers on cardstock with a postage stamp
If I would have been thinking, I would have done the zentangle in the same color as the stamp but it was too late once I thought of that brilliant idea so had to keep on going with the black.
I think that's all the art I have to show....there will be more eventually. I have to do art. It's like breathing. Without it I'd be dead!
Projects in the works:
black star cane
art pennant
fish canvas
box canvas preparations
blank cutting
dottee doll needs a face
felt fish needs more sewing
house magnets need doors and windows
octopus painting needs finished
3 ATCs need colored
copper wire needs sorted and put away
and a whole boatload of other projects!
You all behave yourselves!
Throw some smiles out into the universe. You'll be amazed at what comes back to you!
Give some hugs. Get some hugs!
You all be good to one another! It matters!
Peace, my friends!
831
﻿
Posted by Donna at 8:06 PM

Oh wow Donna, you say your muse is low, well it sure ain't low here friend. I truly love your cane and every time I see one here now, about 100 times a day, I think how lovely it would look with lizards all over it. Hope you don't have to use it too often.