A Drunken Bird and a Few Monsters 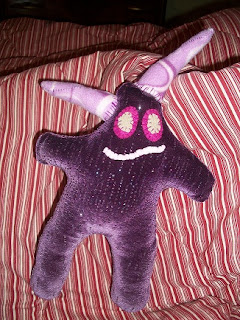 This guy is made from a velvet skirt. I love it that he's all sparkly! He's not really soft as a velvet monster should be because of all the sparklies, but he's awfully cute anyway if you ask me! He's about nine inches tall or so....not counting his fleece horns. His eyes are felt and his mouth is bulky pink yarn sewn on with embroidery thread. 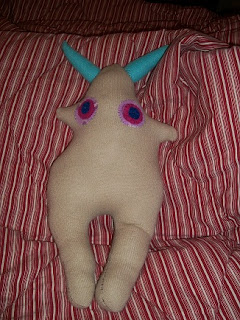 Ugly Beige Monster
I think this monster is very ugly to look at. He has very little personality. He's soft as she can be though cause he's made from an old cashmere sweater. His eyes are felt and fleece and his horns are fleece as well. 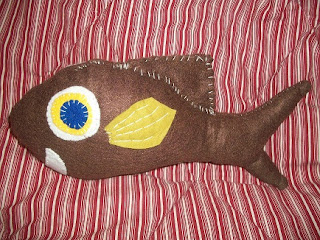 Brown Fish Stuffie
Fish is about a foot long. He's entirely from felt and gray crochet cotton thread.
I was beginning to think this fella would ever get done. I sewed the fish itself together way back in March, might of been February! I stuffed and added the rest since the last post. 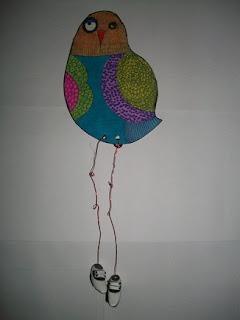 Drunken Bird Magnet
I warned you all there'd be a drunken bird!
Maybe not what you were expecting? Well, this bird looks like he's had way too much imbibing for one day! I do love his shoes though! If  you're gonna go lay one on, make sure you do wear your snazzy shoes!
Bird is made from recycled chipboard, copper wire, plastic shoe beads, markers and a bit of glue stick. Bird is about three inches tall not counting his legs and shoes.
I was on a magnet making kick over a period of a couple days. For some reason I didn't even take a picture of the third magnet I made. Will do that before the next  post though. 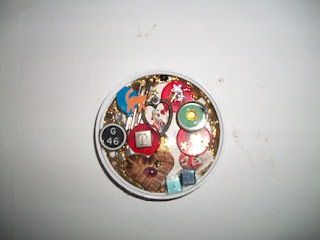 I Spy Magnet
My daughter in law, Lou said this magnet was like an I Spy picture so that's why it has this name. It is just a bunch of little stuff stacked in a white plastic jar lid and three magnets slapped on the backside. It's quite heavy cause dummy me just had to put all those little silver disks all over the bottom of the inside of the lid. It's about 3.5 inches across. It ain't no little magnet! There's a bit of this, a bit of that in there. I tried to stay with a theme of  'gaming' but it kinda went off track with the hearts. Though there are games of the heart...even if they aren't a good thing. It's all chance in the end. Every single thing we do comes down to chance in one sense or another.
I'll probably make more of these kinds of magnets with all kinds of little junk glued in.  It was a fun exercise. I'm not certain where I got this jar lid. There were two of them in the basket on the kitchen counter where all 'art related' things end up from the kitchen. I think my sister may have sent these two lids over cause I can't for the life of me think of anything I've used up that came in a jar big enough to have that large of a lid! 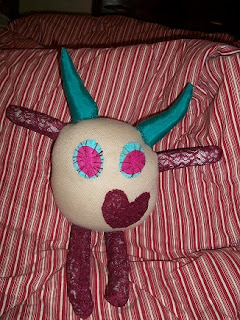 Lace Heart Monster
Everyone whose seen this monster says that heart looks like her mouth. I didn't intend it to but whatever they see is what they see. She's made from that same old cashmere sweater as the other beige monster. And she's not much prettier than he is either! She is just as soft as her brother but she's not near as lovable as he is cause of her scratchy lacy appendages. Her arms and legs are lace, her eyes fleece and silk and her horns silk. Those horns were a BEAR to sew!

With each monster conceived, new ideas are born. Adjustments made from one to the next and learning in the process becomes the norm. Practice makes perfect. I'm still striving for perfection. Probably always will be! 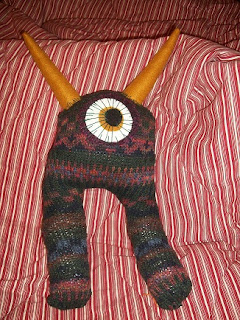 One Eyed Striped Sweater Monster
I love this guy! He's got personality! He's made from an old man's sweater and felt. He's pretty good sized....over a foot from toes to horn tips. He's big and squishy and he just reminds me of a good friend! 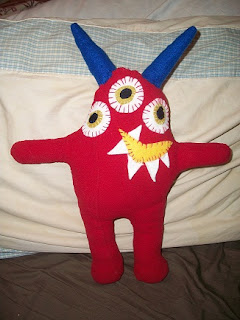 Three Eyed Red Fleece Monster
He's made from an old red fleece shirt I used to wear. His horns, eyes and mouth are all felt.
He's quite lovable too!

I'm working on a little book this evening. Have other things in the works as well but nothing is coming together in any great hurry these days!
Remember.....
Be good to one another. It matters!
Peace
831

Your sewing is getting more bizarre every day. Love these too.