Some Things I Made

Hello Readers!
All is well in my world so long as the old arms keep working half way decent. That neck and shoulders of mine have been giving me some trouble here of late. Minor inconveniences, nothing that will kill me, fortunately. Hasn't really stopped my muse though so nothing to worry too much about. I will talk to the doc about these troubles when I see her next.
All in all, all is well in my world.
I did a touch of cleaning on my desk and discovered a small vial full of blue beads the other day. I had found a tutorial for a wire wrapped bracelet the day before and decided those blue beads would work out just fine for that endeavor.
The results, 15 minutes later: 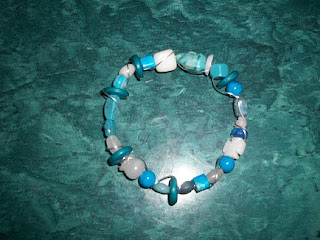 and there were still beads to use, so 15 minutes later: 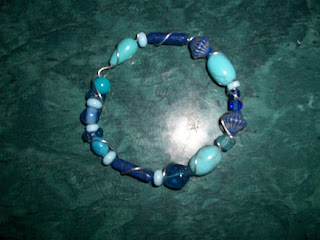 Another blue bracelet. This one is a bit smaller than the first one. The first one is made for an Amazon. I have big wrists but it's even too big for me.
Easy peasy project to whip up in a jiffy and it's quite nice considering the time spent in the making of it! What girl doesn't like a bracelet? Any color combination would work...great way to make a quick gift with leftovers from other projects.
There were still blue beads left after making these two bracelets. You'll get to see the what happened next when I post again.
I had felt food on my mind. The hands cooperated and with the help of my friend Google and my muse, food was cooked up! 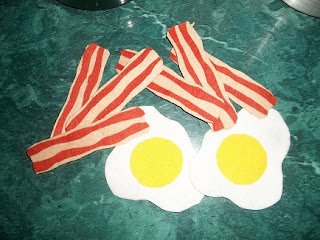 The bacon has stripes on both sides. Two different colors of felt glued together with tacky glue. Next time I make fried eggs out of felt I will sew the yolks on and stuff them a bit with fiberfil so they aren't flat. The bacon pieces were glued on, let dry and then I trimmed the pieces to bacon shape.
Lil A's mama said Lil A needs some food for her play kitchen so all this fake felt food will be given to her. Little girls LOVE fake food! And Lil A has a play kitchen already. 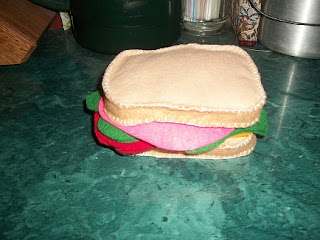 The sandwich was fun to make! I didn't use a pattern, just winged it with the scissors and eyeballed it all as I cut it out. Took me about 6 hours, might of been 8, to sew it all together. Not a great deal of time spent on it. It would have sewn together a whole lot faster on a sewing machine! Well, it would of for you who get along with your sewing machine. I'd of been bald from pulling out my hair fighting with a sewing machine! 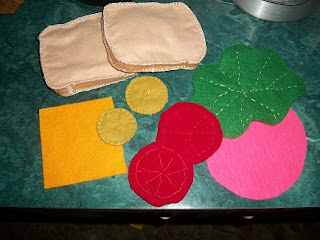 We have two slices of bread, a slice of cheese, two pickle slices, two tomato slices, a lettuce leaf and bright pink slice of bologna! It all stacks nicely into a sandwich. I didn't have a piece of red felt so the tomato slices are made of fleece. I have plans to make a burlap bag for the sandwich to fit into if I can remember where the devil that tote full of burlap is! If I can't find the burlap, I will make a sack of some sort for the sandwich. 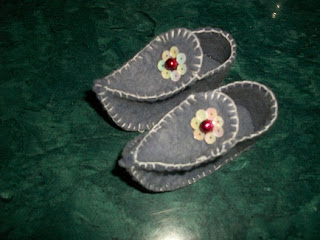 More elf shoes!
Some of the elf shoes sew up nice and neat, some of them don't. All depends on how careful I am with the cutting of the toe and the sewing of the tip of the toe. Ma is on the hunt for some tiny jingle bells she's sure she has so hopefully she can find them and then all the elf slippers will get a tiny jingle bell on the point of the toe and hide my stitching. (I am a terrible seamstress! But I am a fearless one! I'm not afraid to sew by hand.) I already have another pair of slippers sewn. They just need the sequins glued on and their picture taken. They are green with green thread.
I made paper pumpkins with two of my grandsons this afternoon. I've no pictures of that endeavor. Miss Lou took all our pumpkins home with her to hang in the picture window in their house. I had a good time with the grandboys! Grant made some paper ghosts to go with the pumpkins. Another easy peasy project! Construction paper, scissors and glue stick!
My drawing muse has flown the coop for the time being. Haven't seen hide nor hair of her in a week or more. She'll show up again when the sewing muse gets tired! :)
I'm not gonna complain about which muse is in residence...at least one of them is always present!
Life is good, Smile often, Bitch never and live like today's your last day!
Be good to one another!
I'll be back another day with more things I have made!
Peace
831
Posted by Donna at 2:08 AM