You might want to grab a cuppa something and settle in. I might have a lot to say today.  It's been a few days since I was here. I discovered a new obsession. I think though, that it is winding down....
Who knew making coiled baskets could be so darn easy! I don't recall just how I got started on them about four days ago but I've made six of them and have a seventh in progress. I'm thinking I should make a large one out of plastic grocery sacks and white crochet cotton. We'll see if it materializes. 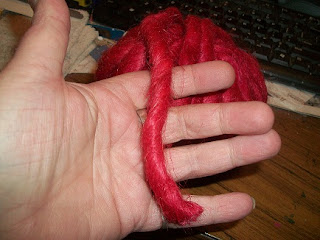 I had this big ball of red string in my yarn basket. Someone gave it to me sometime or another. I was doing crouching on the cone doll bodies (you'll see them shortly), looking for yarn to use on those when this caught my eye. It was red. I needed some red. It was after playing with the cone dolls that the idea for coiled baskets came to me. As you can see from the picture, this is some THICK string. It's made of some natural fiber. It's kinda like really fat twine except there is no braid to it. 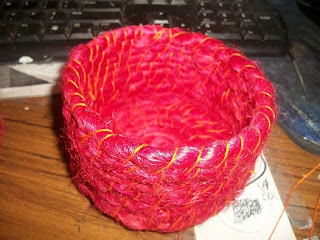 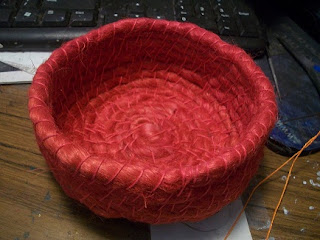 I whipped up these five red baskets in two days time. 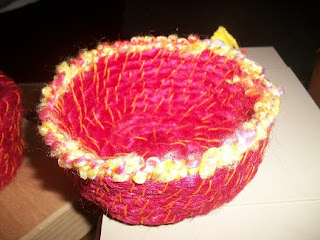 This one has a row of nubby yarn around the rim of it. 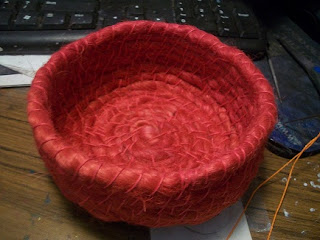 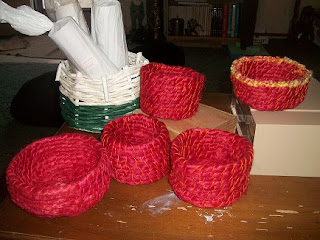 The biggest one is about 6 inches across and the smallest one maybe 3.5 inches. I don't know the true measurements. I didn't measure them. It's all guesswork. 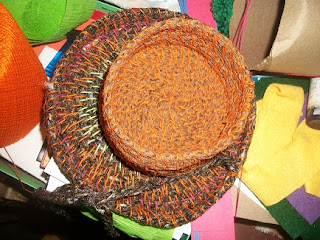 I was really stoked about how quickly the red one's worked up so I got out some other thick string. The brown one with orange is about 4 inches across and maybe 3 inches tall. It didn't work up near as quickly as the red baskets did. I'm going to make a lid for this one and turn it into a round box.
The bigger weaving beneath the little one is a work in progress. This one is made from some man made macrame cord that was more than likely produced in the 1970s. It's not quite as thick as the red string was but it's much thicker than the brown string is. I'm working it up with three different colors of crochet cotton. The pink crochet cotton is all but gone. When it's gone the sides of this basket will have only green and orange cotton thread. This one is about 6 inches across. It is still to be determined how tall it will be and whether or not it gets a lid. I have quite a bit of the macrame cord but I don't know how much ambition is still left. 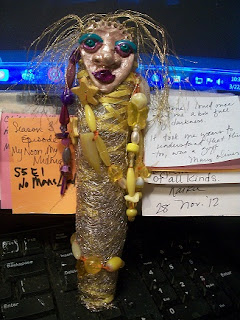 I'm going to show you what you need to make one of your own. 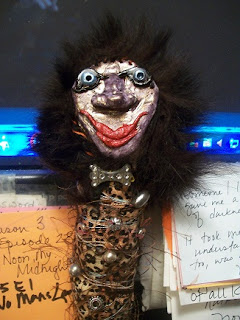 I opted to make six more of them, but you can do however many you like. I find it is easier to do multiples with these guys. 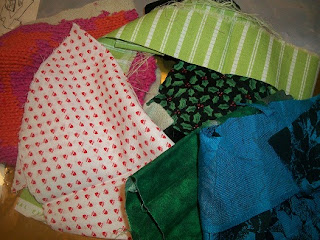 I used cotton material on the six in this post. You won't need very large pieces. 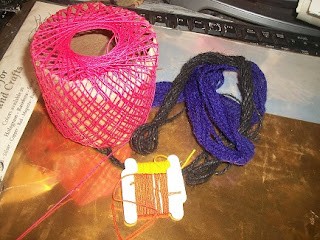 I gathered together various types of strings for embellishments.
Use what you have on hand. 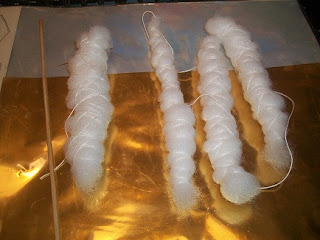 My doll bodies range in length from around 13 inches down to around 5 inches. You make yours whatever size you want.  Wrap some fiber filling around your stick and secure it by wrapping string around it. I used white crochet cotton thread for this part of  process. Don't worry about neatness. No one will see this part. Your goal is get the fiberfill around the stick. 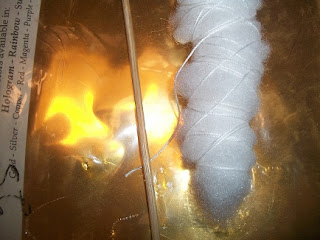 Don't wrap your string too tightly. You want a little bit of give to the fiberfilling. 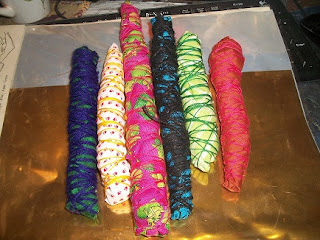 Now do the same with your fabric pieces.  Sorry I didn't take any pictures of this part. Basically just wrap the fabric around the fiber filling and wrap it with pretty string to keep it on. Again, neatness is not essential. Though, if you want it to be neat, you go right ahead!
I cut my fabric into strips about 2 or 3 inches wide and however long the fabric happened to be. That orange one on the right was not a very large piece of fabric so it is not one continuous strip like the others are. Just make it work. If your fabric doesn't cover it all, add some different fabric to the mix. Play with it. Make it work! 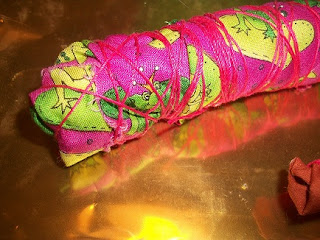 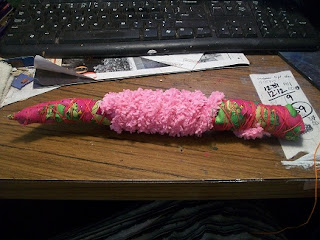 Now we are going to embellish them even more. 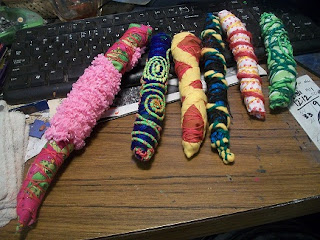 The fuzzy pink one is a bit strange and I really don't know where it is going to lead! They're all a bit wild, actually....and I've no clue where any of them are leading either!
The second in line has green crepe paper crouched on with different colors of embroidery thread. I was going for swirls and the like. Leave a spot clear to adhere the face.
Third in line is the orange one with strips of yellow fleece sewn on with embroidery thread.
Fourth in line is the black hemp cord with yellow fleece crouched with blue embroidery thread.
Fifth is the fat red string and yellow crewel embroidery thread.
And lastly the green one is wrapped with crochet cotton and crepe paper crouched over top.
Once you get your bodies made, you need to doll 'em up, make them your own. 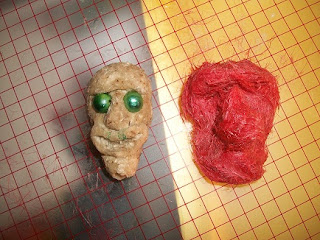 I made the faces for the two I've shown you previously. Those were made from polymer clay and sculpted by your's truly. I made the two faces in the photo above also. The red one is made from cuttings from that fat red string I used on the coiled baskets. It's all held together with some white glue. The one on the left is made from toilet paper and varnish. I'm uncertain why it dried to that awful brown color but that's what it did! The green eyes are simply beads with their holes hidden. I'll be painting the TP face for sure! The red one will get some eyes of some sort and will probably be left the color it is. It will go nicely with the red and white body.

I don't know if this helped or hindered in the quest of cone doll making.
Hopefully it didn't leave you dazed and confused!

I haven't done a lick of drawing since the last post.
I still haven't sewn those little books together.
I have a stack of mail I need to get ready to go to the post office.

All I've accomplished is weaving and folding....and watching Project Runway reruns on hulu. 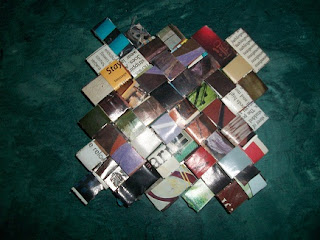 Magazine paper woven coaster. I had one of these on my desk for ages. For being made simply of paper and string these things are quite durable! And easy to make as well! This one is about 4x5 inches. 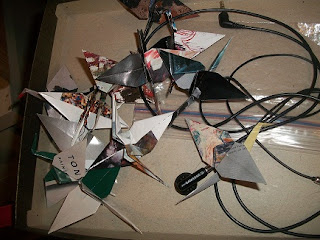 The crane flock has grown by a dozen.

I really do have weaving on the brain. I spent hours last night looking at youtube videos of how to weave baskets. I found one that I'm going to try out in the future. This will be the only place to find it!

Thanks for stopping by to see what's happening!
Be good to one another!
It matters!
Peace
831