Weirdy Arrived and I've Been Busy!

No time to dilly dally, let's get on with it!

Weirdy survived his trip to California so I can show him off now. 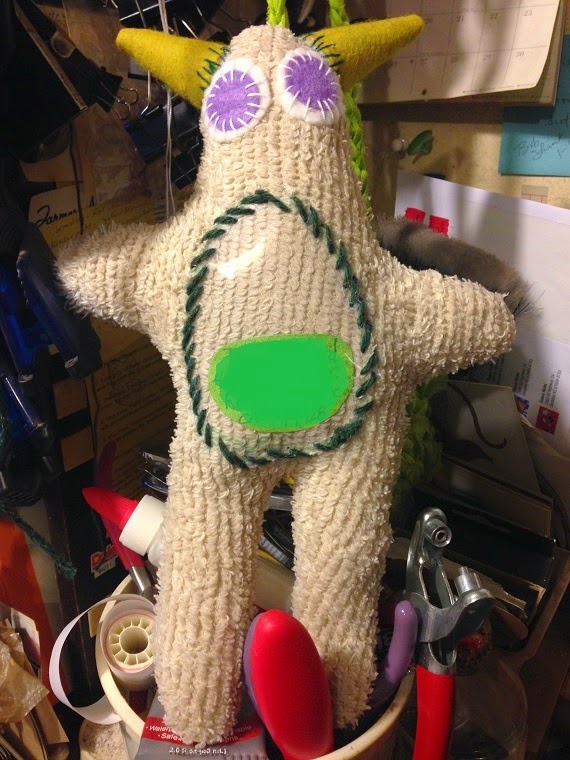 I didn't make Weirdy Monster especially for this project. He's been languishing in a big plastic bag in the closet with a few of his kind. I made him back in 2012 I do believe. I don't rightly remember just when the monster phase started. This guy is one of the earlier ones though. I truly don't know how many monsters are in the closet. I''m guessing somewhere around 18 of them? 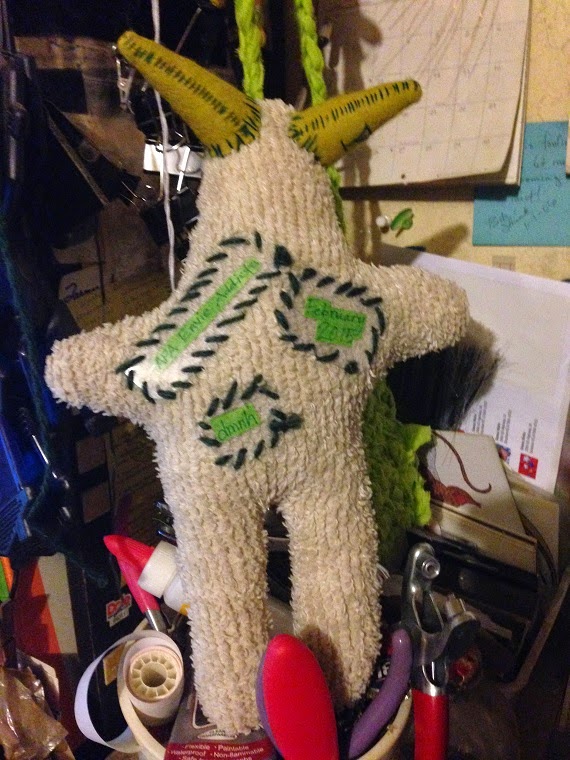 This fella looked like a good candidate for an adventure.
I sewed some clear plastic to him to house the cardstock I've written all the pertinent information on.
Word is, he's headed to Arizona for an art party soon. Wish I was going with him on that trip!!

I think it is safe to show you all the Valentines now. They should all arrive quite soon, if they haven't already. 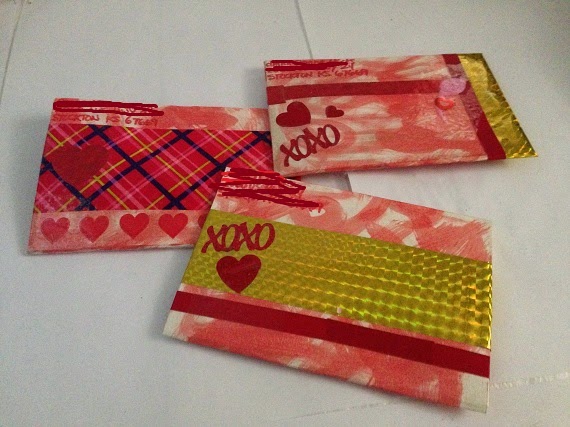 I don't have a picture showing all 15 of them I made. I forgot to take a picture of the whole pile. I remembered after they'd all gone postal. Not to worry though. They all pretty much looked something like these three. All of them were different, but all fit with this group. 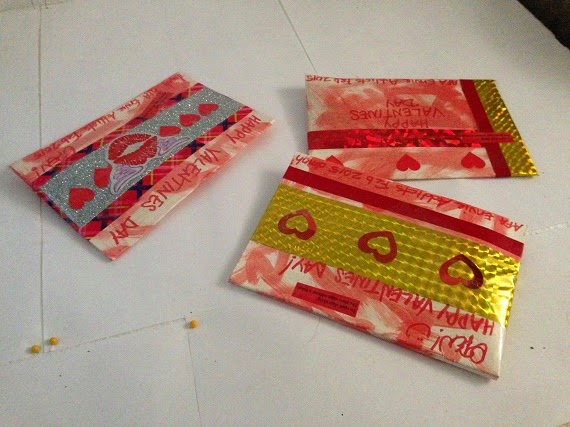 This is the backside of the same ones in the first picture. I only hope they weren't too hard to get into. 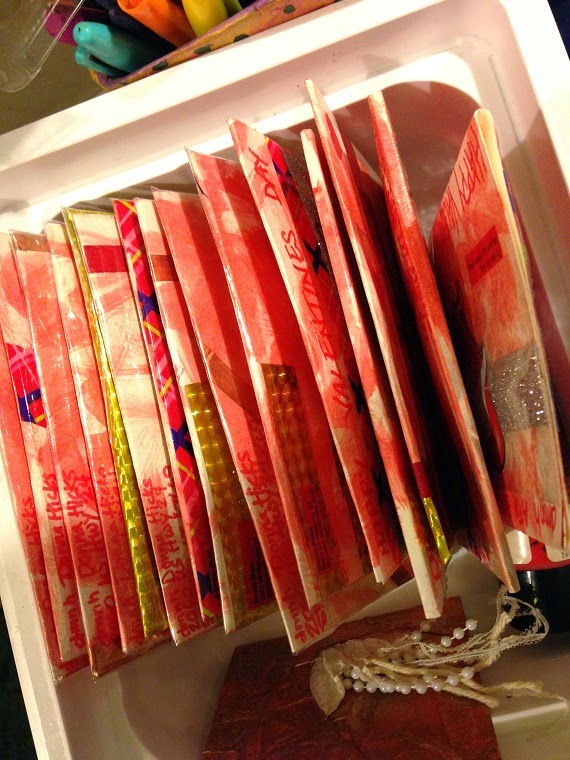 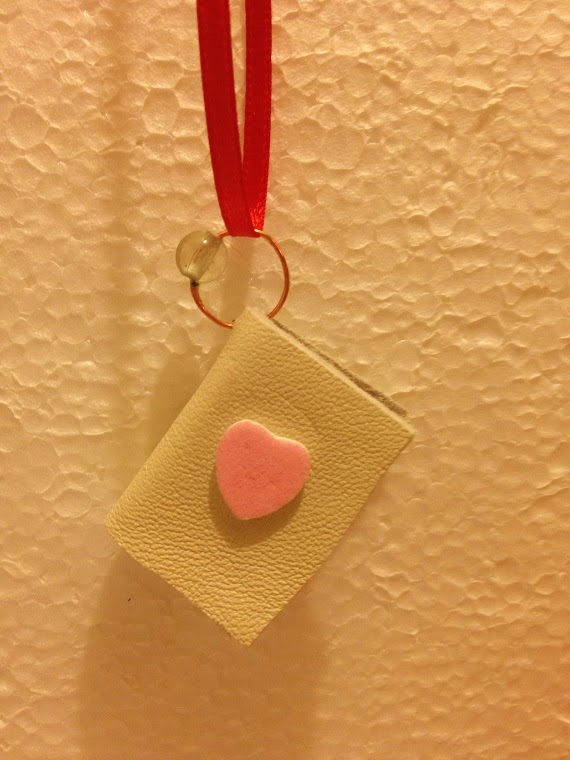 This is what was inside each one of those Valentine envelopes. I don't have a picture of the whole batch of little books. (That cloud of senility following me again.) I made 17 in white leather and 6 of them in brown leather. They're about an inch and a quarter tall and an inch wide. Somewhere around there... I don't have any of them left to measure one for you. I went to a Valentine's Sister's Party at my sister Elaine's house on Sunday and handed them out like candy. They were a huge hit! It was quite the sight really...a bunch of old ladies sitting around with a little book resting on their bosoms! I love my sisters and my mother and my aunt....It's called a sister's party because only sisters can come to it. No boys allowed!
It was a fun day! I sat in the back seat of Aunt Sherry's car, watching the scenery go by for 23 miles while she and Ma sat in the front. No worries at all! Then I ate cherry pie with real whipped cream and vanilla ice cream. Ma made the cherry pie. Or as she put it..."I threw it together." It was yummy! Then we all divvied up the goodies we'd brought along and sat around some more yakking at one another!  Sister's parties usually include an invite for all of my sisters but this was an impromptu affair and the other sisters live too far away for a short notice invite. My mother has seven daughters. Four of us were at the party on Sunday. And Aunt Sherry can come to a Sister's Party because she is Ma's sister. We always have fun at a Sister's Party but it's really a party when we all show up!

I told you all about a crochet rag rug in the works in the last post. I tore out all that I had done on that rug and started over. I have no visual proof of this. 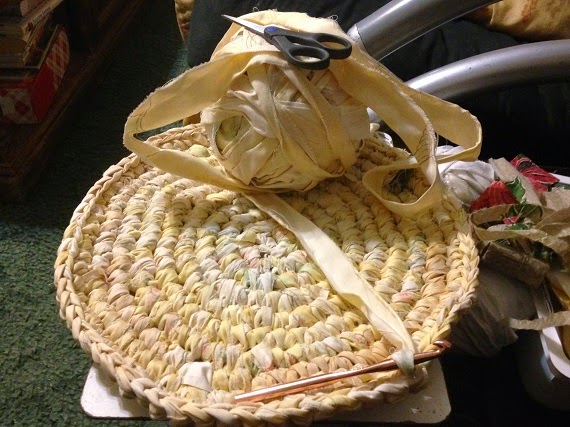 But the cloud cleared long enough for me to remember to show what I have done with some of the drapery yarn. This isn't a rug either. It's going to be a basket. I've torn out about three rows of this large disk and started crocheting the sides of the basket. It wasn't laying flat at all! One can't have a wonky rug! So a basket it will be! I have one row of the sides done. It's about 14 inches across. I'm guessing on that measurement. I haven't actually measured it. That crochet hook isn't quite big enough to comfortably crochet this linen fabric and my hands complain loudly after only a few stitches made. The going is slow at this point but eventually we will have a nice big, sturdy basket! 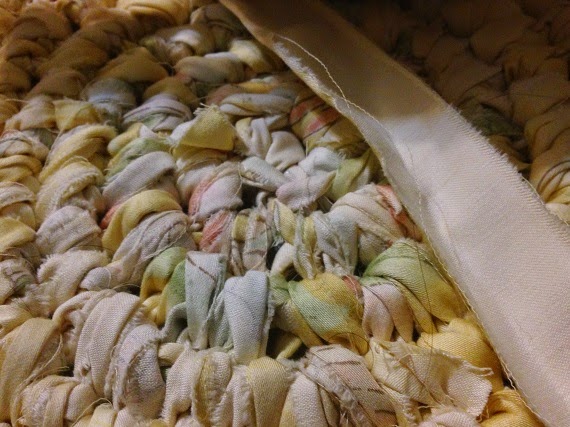 Here's a close up of the yarn and stitching. I like that it has a ragged edge. The basket will need some long threads snipped to tide it up a bit once it's done, but all in all, I like that shabby look it's taking on.

I started another fish picture. This one is number 14. Those purple and white crocheted strings made it on the picture. I spent hours tearing and tying those things at the bottom of the canvas. I have no clue where this thing is headed. It hasn't spoken to me for a few days now.
You'll see Fish Picture #14 again, once I figure out what the heck it wants to become! 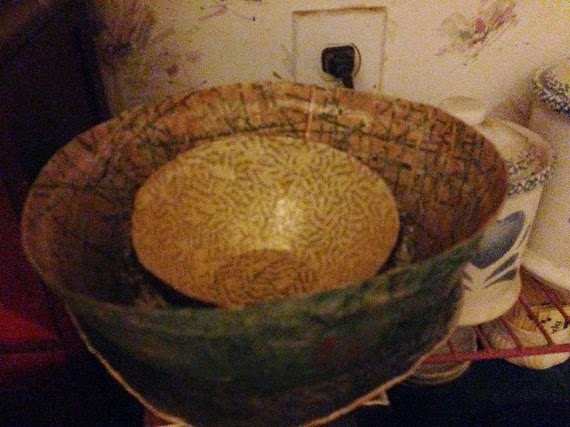 I have a stack of bowls sitting on top of my toaster waiting for me to repair them. The little one in the middle is sitting on the kitchen table with a coat of red paint now. I really need to find the bag of shredded money to fix the other two in the picture. If you all have any clues on where that bag of shredded money might be, speak up, please. I've been hunting for it for some months now! These bowls were damaged from my packing them wrong. 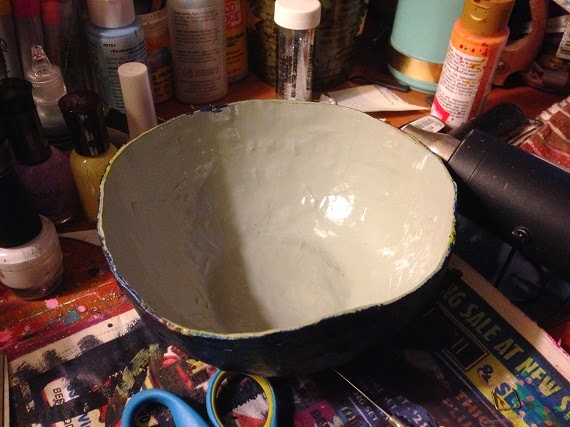 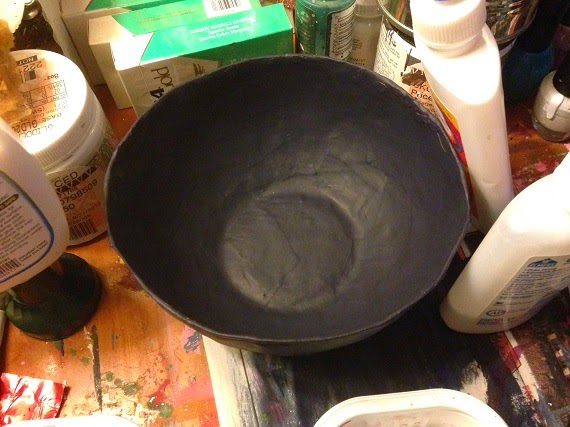 This bowl got a coat of midnight blue paint inside and out. It used to be a shade of royal blue. Now it's outside is sprinkled with glitter. The inside will get the same treatment. I'll show you all these paper mache bowls when I get them done. All of them were made back in 2013. I'm just giving them a new look because their old one's didn't work any longer.

Fred dog woke me around 2 a.m. on Friday morning to go out to do his business. I stayed up to wait for him to come back inside. By the time he decided his business outside was done, I was wide awake and making coffee.

What else is there to do at 2 a.m. than put some books together? 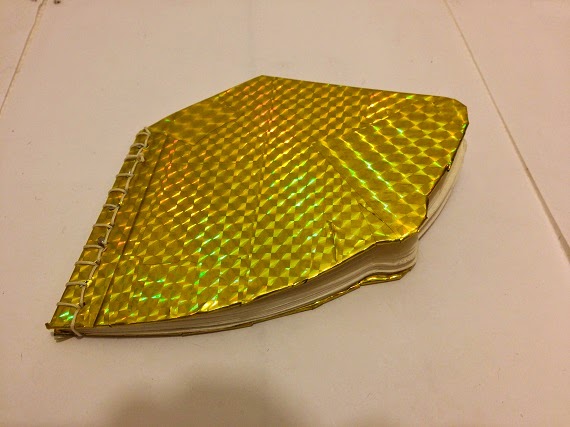 This is a japanese stab bound book made from some matboard covered in holographic tape, about 20 coffee filters and some nylon string. 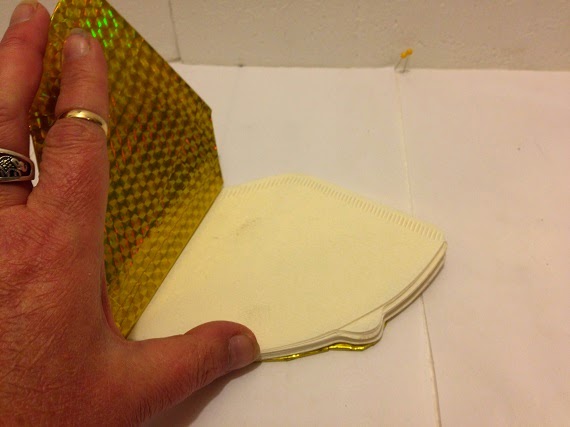 Here it is open. 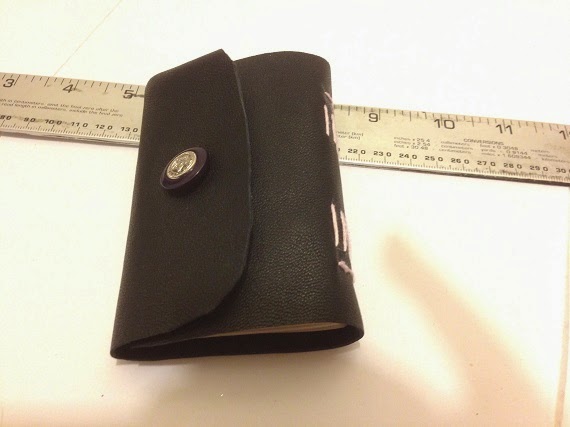 This is a great little book! Stout, strong! LITTLE. It's the size of an ATC. 3.5 x 2.5 inches. A tad larger than that actually. The paper is ATC size. It's black leather sewn with variegated purple embroidery thread. 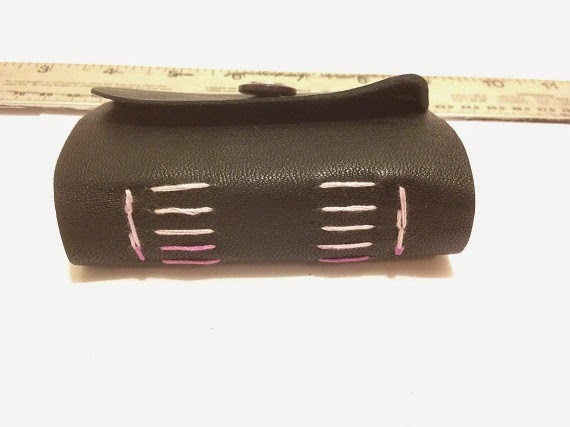 It has 40 pages, 80 counting both sides.  The button is plastic and metal. 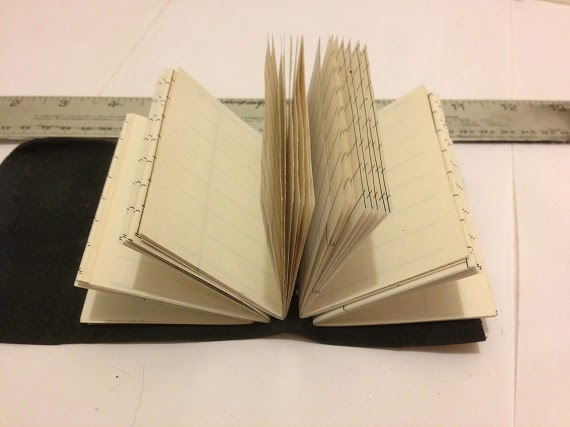 The pages came from a dumpster. They were forms from an auctioneering company. I cut off the parts with text on them, leaving just lines. 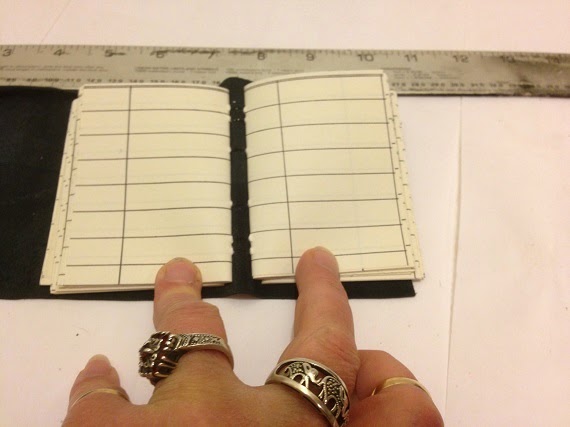 This entire book is made from castoffs. As I said the pages came from a dumpster. I got five or six of those pads of forms. The leather is from a skirt I bought at the thrift store for 75 cents, the button came a shirt and the embroidery thread came from a yard sale. 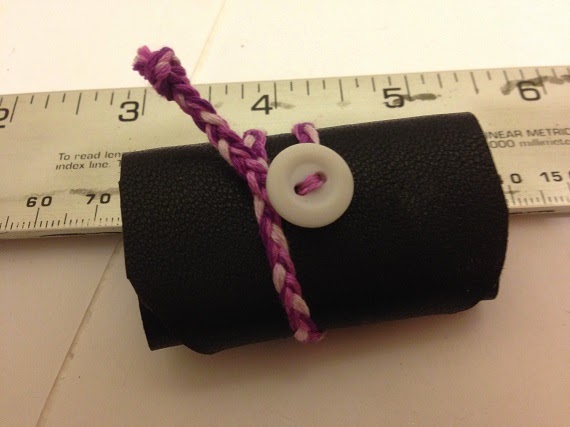 A very tiny leather bound book with a button closure. Pay no attention to that ruler in the background. It doesn't represent how tiny this book is really. I did measure this one and it is just over 2 inches long and about an inch a quarter wide. It would fit in a matchbox if it were just a bit shorter on the long end. 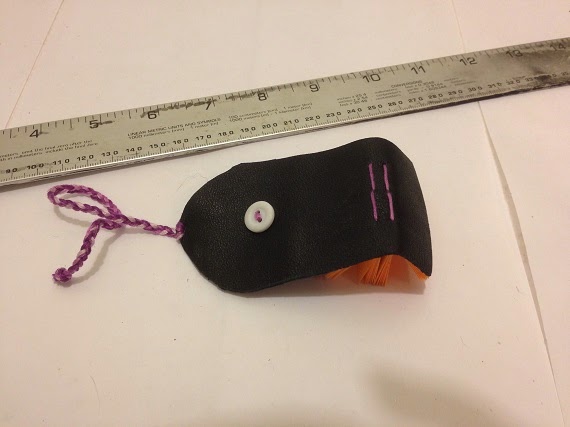 It has twenty sheets of orange paper sewn in the pamphlet stitch with embroidery thread. The button is plastic. 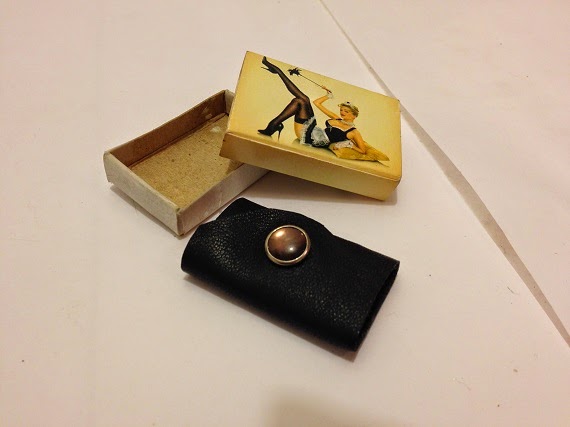 This little leather book is the same size as the previous one but it fits in the matchbox sitting beside it. 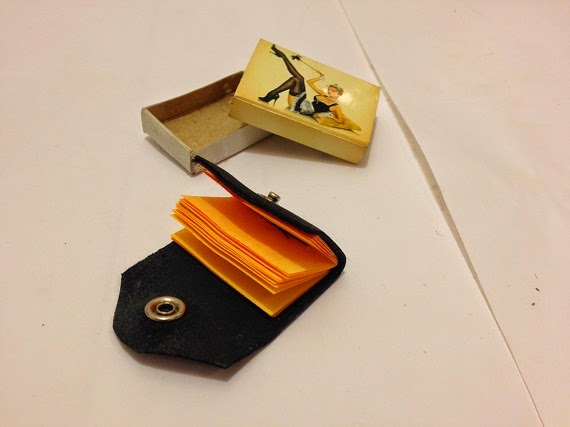 It too has orange paper pages. If I am going to insist on putting snaps on books, I am going to have to invest a new hammer for the job. My weenie hammer isn't going to cut it! An eyelet setter would be even better! 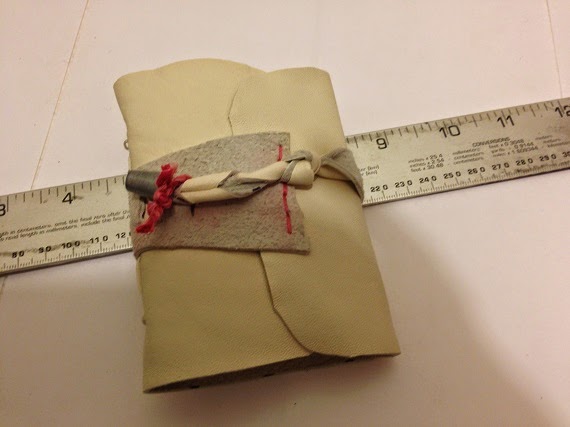 This little book is about 3.5 inches wide and 5 inches tall or so. It's really hard to tell accurately from the angle in the picture. I'm too lazy to get out of this chair, walk a dozen steps, measure it and come back to tell you. In reality, my feet are killing me!
The leather came from a coat my sister gave me. I sewed the closure on backwards the first time. I like the closure on this one. I wasn't sure how to make it work but I figured it out. That's a metal doohickey from the end of a string that was once in a hoodie hood. 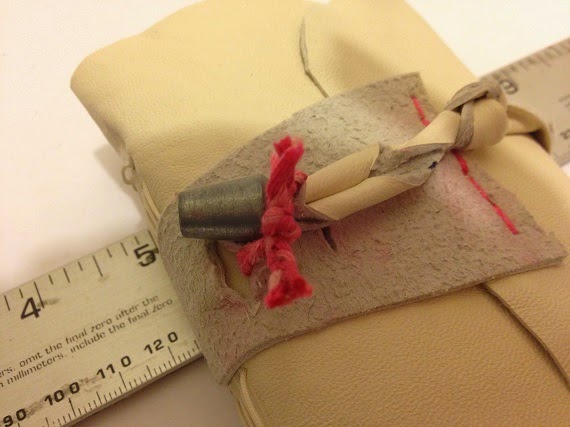 It's sewn with variegated pink embroidery thread. The braid for the closure, the same. 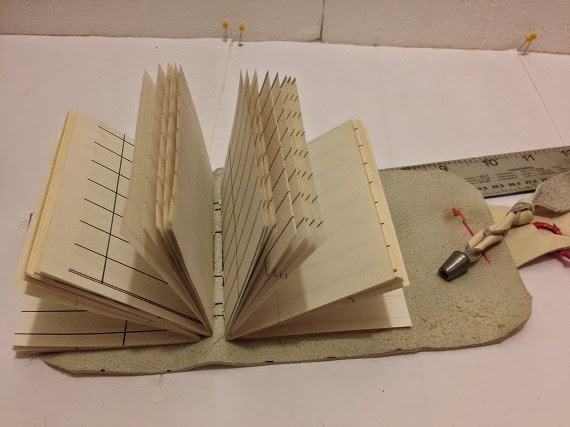 And it has those same form pages as the black book above.

Little books are so sinfully easy to make! 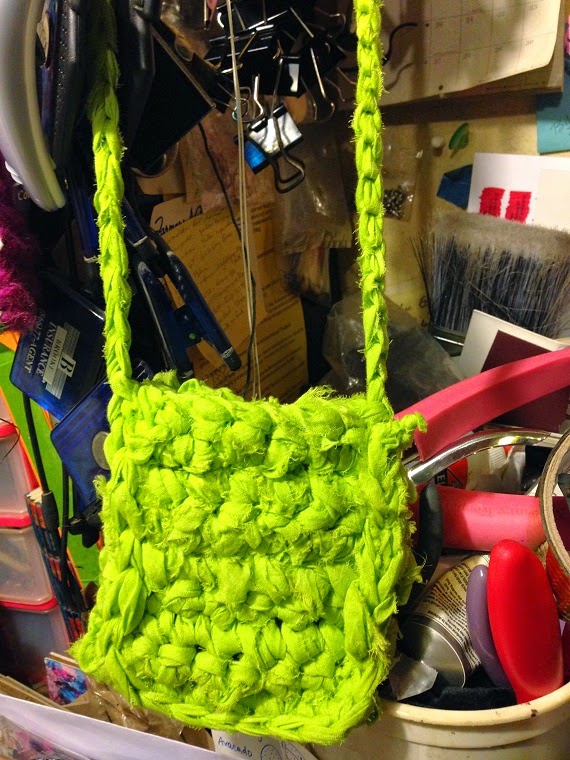 I thought I needed another pouch to carry my phone around in so I crocheted this thing out of some neon green organza that was once a skirt. It's bright! I'll give it that! And it does work well for carrying the phone around!
Mission accomplished! 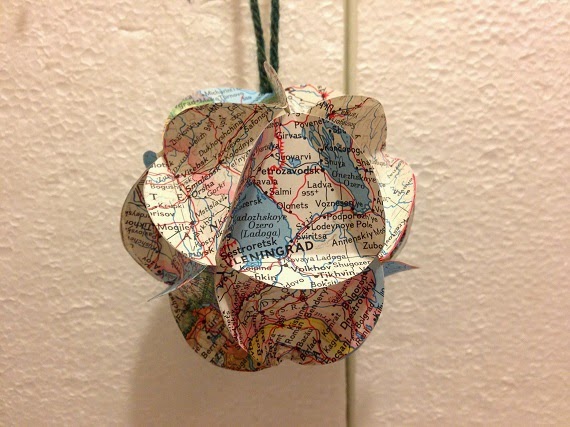 I had a request for some paper balls made from maps.
OK. I can do that! I showed you all the map circles I cut out a few weeks ago. I wondered what the heck I was going to do with a peanut can full of 3 inch circles. I'm still wondering what I will do with a peanut can full of 3 inch circles. I had to cut these 20 circles down to 2.5 circles before they'd be small enough to make into a paper ball that wasn't so huge. The request was for small balls! This one is still on the large size.
I've remedied the problem of big balls by cutting 1 1/8 inch circles from another map. I probably should have chosen a different map than the one I did choose but it's too late now. I've spent most of the day cutting circles from the National Geographic map I did choose.  Lands of the Bible Today December 1967 vol. 132 no. 6. I've already cut enough circles for a few balls and have made two perfect size balls for the request. There wasn't a number of balls in the request, just that they needed 'some' map balls. I got map balls! And should have a few more before the week is out!

Thanks for hanging in there through this rambling ramble.

Now I can't wait til I get my Donna-tine!

What a great party idea! Sounds like a lot of fun. :)

I woulda left some of the text on the auction papers. I like the look of someone else's writing or typing in the background of drawings.

Wow! You are one busy lady. I love all of your projects.

Holy smokes!
I too have a closet full of monsters, mostly sock monsters that I've made and have yet to find a good home for. I'm worried all those monsters are going to burst out one day and reign over my apartment for eternity.