A few ATCs and A Boatload of Kids

Hello Readers!
Thanks for stopping by!
I would have had this post done hours ago but my son, his wife and the grand daughter showed up around 1a.m. I knew they were going to be here today sometime before the sun came up but didn't expect them quite that early. They came along so soon to avoid traffic on their 2.5 hour drive to get to my house. It is good to have them here. They've all gone back to sleep and beings I had a 7 hour nap earlier, I am still wide awake!
Not much in the ATC department to show you all today. I have 4 ATCs that are half done, they still need some color added to them. I did them yesterday at the cafe at dinner time. You'll see them as I get them completed. Only 4 ATCs to show you all today.
We will start off with Bottle Cap Kids cause I've a bunch of them to show you. I haven't yet decided which four of these little guys will be going to Wisconsin to head to the four corners of the earth for the Art Doll Swap I entered the other day. The Art Dolls aren't due till June, but I have mine ready so they'll head to Nanner's house till it's time for them to travel on when the swap is swapped out.
Pay no attention to the date on the photos. I'm not sure how it got to be 2115 but there it is~! And I've no idea how to change it back to 2010. I'll figure that out eventually. 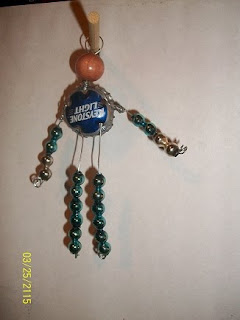 Mr. Moots
BCK
25 March 2010
Mr. Moots is made from a metal beer bottle cap, silver colored wire salvaged from something a few years ago...I forget where it came from. His legs and arms are antique glass christmas baubles that were strung together as a garland and his head is a wooden bead. He's just over 5 inches tall and is designed to hang. 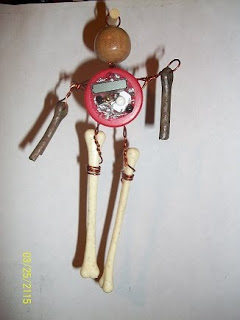 Boney Maroney
BCK
22 March 2010
Boney is made from a Coca Cola red plastic bottle cap, copper wire salvaged from a vaccuum sweeper, cotter pins swiped from my son's junk drawer in the workshop and plastic bones that someone was sure I could use in something! His head is a wooden bead and the stuff glued to his tummy includes: aluminum shavings my brother saved for me, irridescent plastic beads, an LED display from a wrist watch, gold plastic bead and that white plastic thing? I've no clue what the devil it is...came from something I junked out. Boney stands about six inches and is designed to be hung.
I really wish I had more of those plastic bones! I acquired only three of them so there may, in the future, be a BCK with only one bone leg. Or I may use it for a chunky page. Who knows? Surely not me! 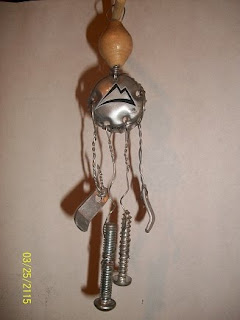 Sargent Stubbs
BCK
22 March 2010
Sarge is made from a metal beer bottle cap, silver colored wire salvaged a few years ago from something or another...I forget just where it came from, his legs are two different screws and his hands are aluminum clips of some sort. His head is a wooden bead and he stands about six inches tall. Hang him somewhere, he hates to stand! 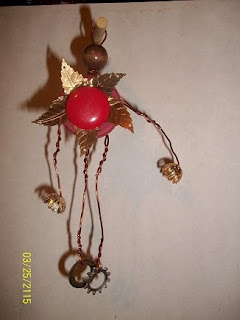 Carla Louise
BCK
23 March 2010
Carla is made from a burgandy colored plastic soda bottle cap, copper wire salvaged from a vacuum sweeper, two different washers for her feet, gold colored jewelry findings for her hands, a wooden bead for her head and gold plastic leaves and red metal earring glued to her tummy. She stands about 5 inches and is most happy to just hang out somewhere. 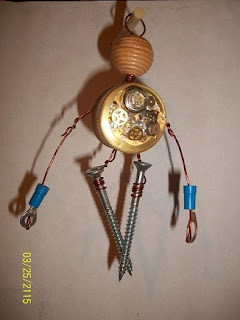 Lucien
BCK
23 March 2010
Lucien is made from a gold metal cap from a cheap bottle of wine, copper wire salvaged from a vaccuum sweeper, connectors of some sort make up his hands, his legs are matching wood screws and his head is a wooden bead. The stuff glued to his tummy includes: a couple of dead button batteries, some aluminum shavings my brother saved for me and some watch parts. Lucien stands about 5 inches and is designed to be hung. 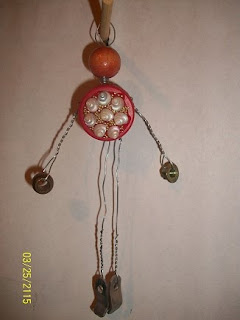 Beulah Irene
BCK
23 March 2010
Buelah is made from a red plastic Coca Cola bottle cap, silver colored wire salvaged a few years ago, aluminum clips make up her feet and a brass doodad and a fancy nut make up her hands. Her head is a wooden bead. Glued to her tummy are real sea shells and gold microbeads. She stands just at 7 inches and is designed to be hung. 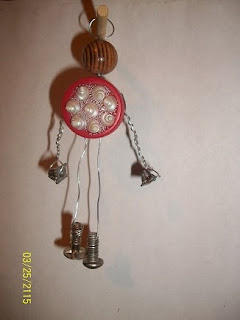 Rebecca Agnes
BCK
23 March 2010
Rebecca Agnes is made from a red plastic Coca Cola bottle cap, silver colored wire salvaged a few years ago, two different screws make up her feet, and her hands are some sort of connector from something junked, her head is a wooden bead and she has real sea shells and silver colored microbeads on her tummy. She stands about 5 inches and is designed to be hung. 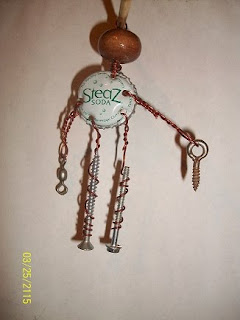 Steven Steaz
BCK
25 March 2010
Steven is made from a metal soda bottle cap, copper wire salvaged from a vaccuum sweeper, two different screws for his legs, an eye hook and a fishing lure part for his hands and a wooden bead for his head. Steve is a short little guy...he's only a little over 4 inches tall. He's terrible at standing and doesn't do real well at sitting either...better hang him up if you want him at attention! 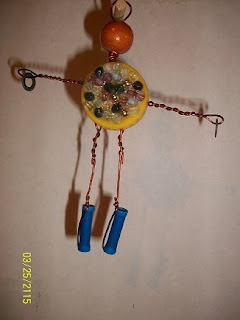 Yolanda Renee
BCK
23 March 2010
Yolanda is made from a yellow plastic soda bottle cap...(pineapple soda--yummy stuff!), copper wire salvaged from a vaccuum sweeper (she's the last kid made with the vaccuum sweeper copper wire), two little metal washers make up her hands, her feet are connectors of some sort and her head is a wooden bead. Glued to her tummy are a bunch of plastic beads. She stands about 5 inches and like all the bottle cap kids, she prefers to hang. 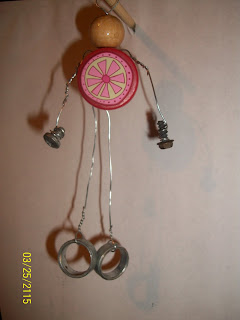 Pinky Malone
BCK
23 March 2010
Pinky is made with a red plastic Coca Cola bottle cap, silver colored wire salvaged a few years ago, two different screws make up her hands, her feet are two metal hoops from something that was junked and her head is a wooden bead. The flat disc attached to her tummy is made of rubber. Not sure what it came from, my sister sent it to me in a box of goodies. Pinky stands about 6 inches and is designed to hang.
The dates on the Bottle Cap Kids might not be spot on...but close enough! I always wait till I have a few of them made to take their picture and post them so I forget which day they were all made. These guy's birthdates are pretty close...within a day or two of when they were actually made anyway.
There will be more BCKs in the future. There are two awaiting embellishments for their tummies. And the kitchen table is still covered with Kid making supplies so it's a very good bet there will be more!
Stay tuned! ;)
Now, on to the ATCs. Nothing spectacular to show you but that doesn't matter, you all get to see the best with the worst! 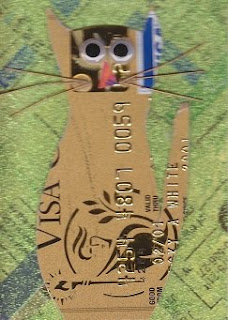 Visa Gold Cat
ATC
21 March 2010
365 Project #82
Collage--Background is herringbone technique done in yellow pages from the phone book then painted with green glitter paint. The cat is an actual Visa Gold card cut free hand into the cat shape. His whiskers are wires from an old christmas ornament, his nose is a triangle cut from a postage stamp and he has those cute little googly eyes so he can see! Base of the card is recycled cardstock. 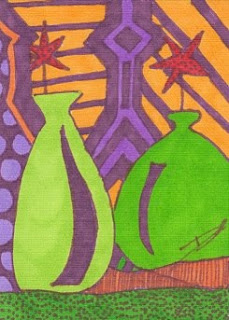 Freckled Star Sticks
ATC
24 March 2010
365 Project #83
Markers on recycled cardstock.
I really thought the purple pen was a black pen when I grabbed it on my way out the door to go to lunch the day it was made but it wasn't a black pen, it was purple! Still works out fine if you ask me though. The title of this one is thanks to my silly brother who gave me a line about freckled starfish when I was drawing this one. The color was added a few hours after the drawing was made. 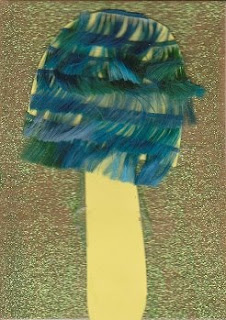 Another Fuzzy Wuzzy
ATC
21 March 2010
Collage--Background is recycled chipboard. Not sure what it came from, it's clean on both sides. I painted it with green glitter paint and then applied the mushroom which is made from a yellow paint sample card and eyelash yarn. I really like the first fuzzy wuzzy mushroom much better than this one but not all experiments turn out the same way twice. Art is like that as well. 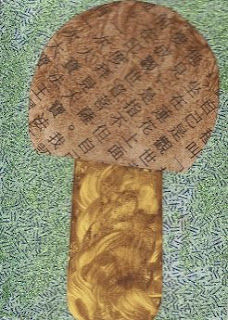 Asian Text Mushroom
ATC
21 March 2010
Collage--Background is security envelope inside painted with green glitter paint. Mushroom cap is asian text page painted with walnut ink. The stem is a yellow paint sample card finger painted with walnut ink. All is attached to a recycled piece of chipboard from a snack cake box.
And that concludes our art tour for the day!
You all go out and get your hugs! I got a couple already today and the sun hasn't even come up yet! That doesn't happen often! Hugs before the sun comes up!!!!
Be good to one another! It matters!
Peace
831
Posted by Donna at 5:08 AM

Oh how I love these bottlecap kids! I just think they are SO clever and cute!

Hugs to you and hope you're feeling tip top again soon!

I just love your bottle cap kids. Where the heck did you find so many bottle caps?! LOL

Your ATCs are awesome.

Thanks for stopping by Cheryl and Tammy. The bottle caps are easy to come by...most of them anyway. I know a fella who owns a bar and I get the beer bottle caps from him. The others are one's either I have collected from my own use or ones that others have given me cause I've trained my people well in that department! :)
I truly am hooked on making the little devils!
Thanks again!