Today is Annabel's 2nd birthday. I don't know where the last 2 years have gone!!!
She can't be that old already....
I got on a monster making kick. Out of the blue the thought of monsters came to me. I'm sick of sewing mice, though there are still many to be sewn. I wanted to make Annabel something for her birthday and what little kid doesn't like a cute little monster?
Then I decided her brother needed a monster as well.
And then RJ informs me there are two other little kids at his house and well, they needed monsters if Bubba and Annabel were getting a monster!
So, 4 monsters were born over the last two days! 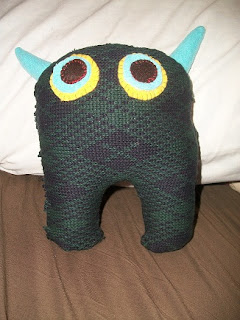 Green Argyle Monster
That's an old sweater his body is made from. It had a really cool machine embroidered picture of two men golfing on the front of it. It was an ugly sweater, but it makes a neat monster!
There's part of a cat in the next  picture to give you an idea of their sizes. 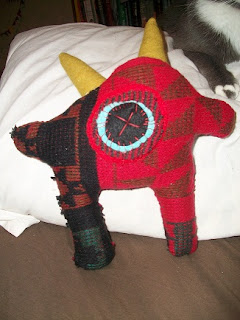 One Eyed Red Monster
He too was an old sweater. Not a pretty sweater though!  When I cut this one out, his head was symmetrical. When I got done sewing, it wasn't. Change of plans for the two eyes I had cut for this monster before the sewing commenced. 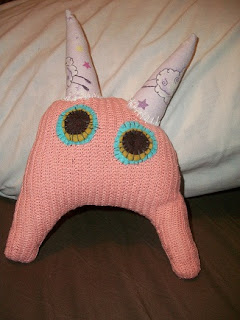 Sheep Horn Monster
He's made from an old cotton sweater and his horns have sheep's butts on them. Not sure how I managed to make the horns match. That was  purely accidental! His horns came from a pair of flannel pajamas.
All of the monster's features are either felt or sweater material.
Felt is a beautiful fabric for hand sewing.
Flannel is quite easy to sew as well.
Annabel's Monster was my first monster attempt. 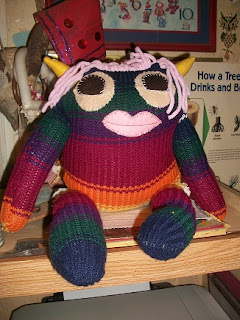 Annabel's Monster
She's made from an old cotton sweater, felt and big nubby yarn for her hair. She's a lot bigger than the other monsters here. She was also a lot harder to put together! I like the smaller monsters better than this one. I don't think Annabel is going care one way or another. This monster is big and squishy, perfect for lugging around and using for a pillow.
In a couple of hours I will be getting in the van and heading to Nickerson to see the kids and join in on the birthday bash! Pictures to come!!!!
You all have a stellar Saturday!
Be good to one another! It matters!
It truly matters!!!
Peace
831
Posted by Donna at 1:54 AM

how adorable- is Annabel your granddaughter? happy boifday annabel.