There are only about four hours left of 2014. Not sure how this year flew by so fast. Seems like yesterday it was January.

I haven't done my count of art for 2014 so I'll give you that in the next post. Each year I keep track of how many things get done during the year. The numbers are usually pretty high. Last year's total was 576, though the actual number of things made is higher. I don't always count EACH item separately. If I do a dozen of something--like the peanut humming birds--I only count that as one project, not 12 projects. As I haven't written all projects down yet, I can't give you a total. I can tell you that the last thing written in the book are the pistachio flowers I showed you a few posts back. 367 is the last number in the book at present. 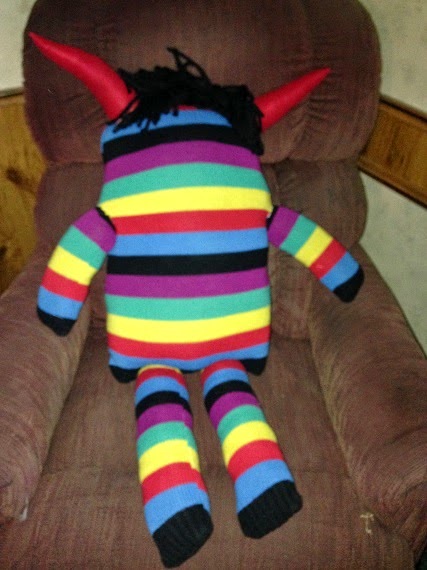 Monster is still blind at this point. I'll be sewing his eyes on within the next two days. His new owner is supposed to be coming to visit on Friday so I better get cracking on giving this fella some eyeballs!
Brenton requested a hugging pillow. I asked him if he wanted a new monster,big eough for a hugging pillow. His eyes lit up, a big grin spread across his face and he said, "Yeah! Can you make him striped?" I couldn't promise stripes but the monster gods smiled down on Brenton and my sister gave me this striped sweater the next day. This monster cost me nothing to make! Not a dime! He's stuffed with green polyester filling that came out of a dog bed. Ma found the dog bed somewhere. She said it came out of a dumpster behind a store in Norton. It was a brand new big dog bed that was slashed open with a knife on both sides of it. There didn't appear to be anything wrong with it otherwise. Don't know why they threw it out. It had never had a dog sleep on it. Ma was going to sew it up, put a new cover on it and give it my brother for his dog, Flomar. She changed her mind and was going to throw it in the trash. I confiscated it and stuffed the monster with it. There's still enough of the filling left to stuff a regular sized monster. I could have saved the fabric covering from the dog bed but I didn't save that cause I really don't like sewing with cotton fabricand it really wasn't anything special. I did save the zipper that was in the cover though. 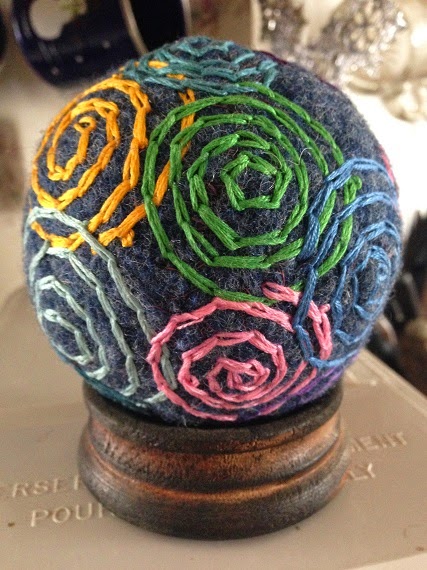 I finished an embroidered ball. 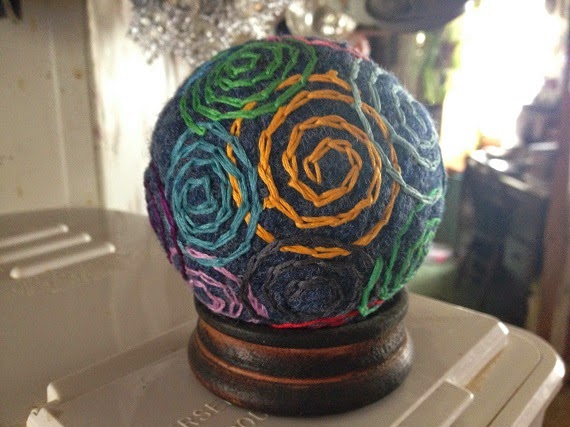 A different shot of the same ball. 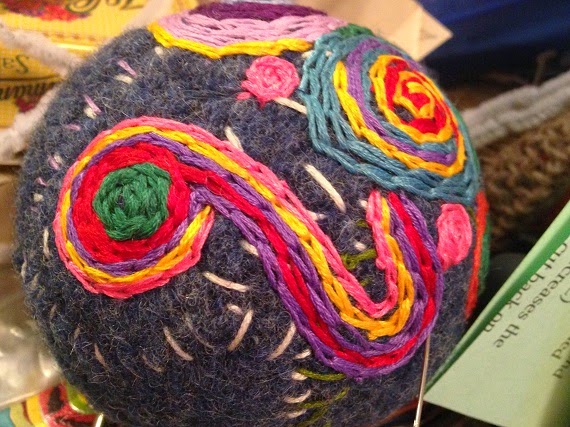 And I started another one. I sewed the wool fabric on this one a bit different than all the others. I sewed it with embroidery thread instead of regular sewing thread. I'm going to attempt to cover this one completely with embroidery stitches. What you see is all that's been embroidered thus far. Might be awhile before this one is completely done. 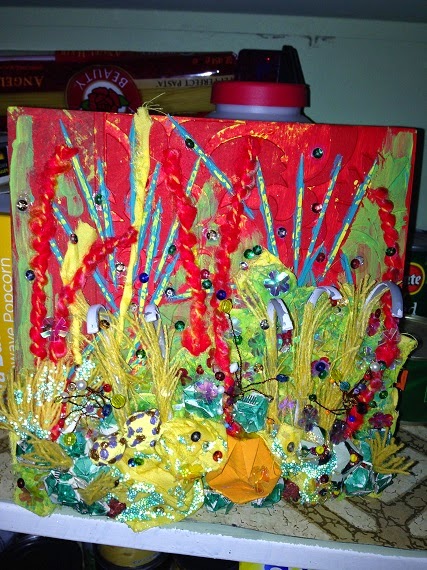 I worked on the newest fish picture for a few days. This one is 8 x8 inches. The canvas started out life as a home decor picture. It's actually a plastic box with 2 holes in the back, made in China. On the front of the plastic box was a design done in a thin sheet of rubber. You can see the pattern if you look real close at the red background. I didn't really try to hide it, just wanted to disguise it so it wasn't so blatantly there!
Someone brought these home decor pictures to me. There are three of them. Apparently someone else didn't think they were anything special. When I got them they were covered with thin cotton material. This one had yellow fabric stapled to it around the back of it. The other two are white and brown, I think. I have no idea what design is on the other two. I'll figure that out when I take that fabric off. 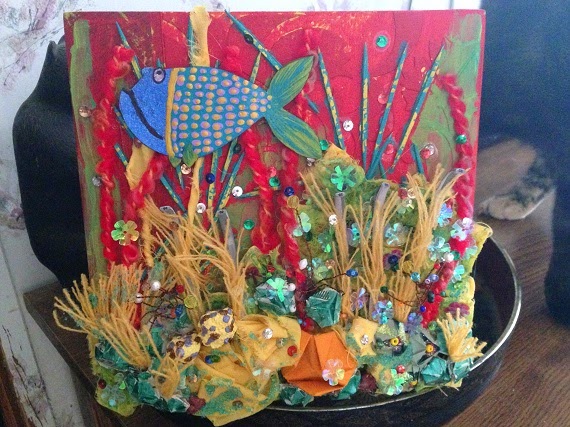 I used the yellow fabric for the reef. I tore it into strips and made 'blobs' from it. Kinda like flowers, but not quite. I covered the bottom third of the canvas with the fabric and then started adding things to it. I actually painted the whole thing first and added the blue sticks before the reef. The blue sticks are toothpicks, glued willy nilly. The yellow on the sticks got there after they were already glued down. There are sequins, crewel embroidery yarn, origami paper modular units from a failed bucky ball or two,  some wire doodads with beads red yarn  and some other things I'm sure I'm forgetting. I drew the fish on chipboard, painted it white, cut it out and then painted it with fingernail polish before gluing it to the canvas with tacky glue. This is the 11th fish picture I've made. It's also the smallest fish picture I've made thus far.
For the new year I am making the goal of doing 6 fish pictures. The big ones take weeks to do! This little one only took about five days. 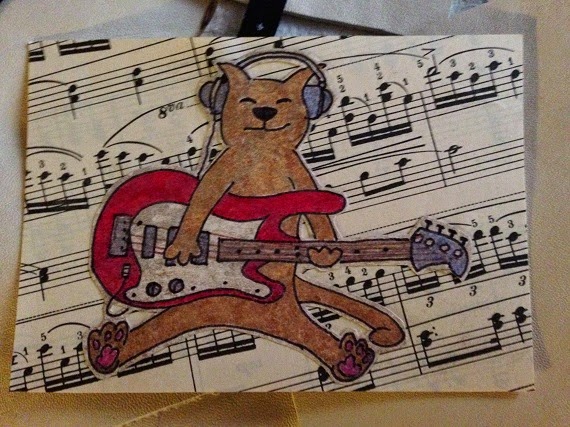 3.5 x 5 inches
Guitar cat
cat is drawn with markers on drawing paper, cut out and glued to sheet music that is glued to cardstock. 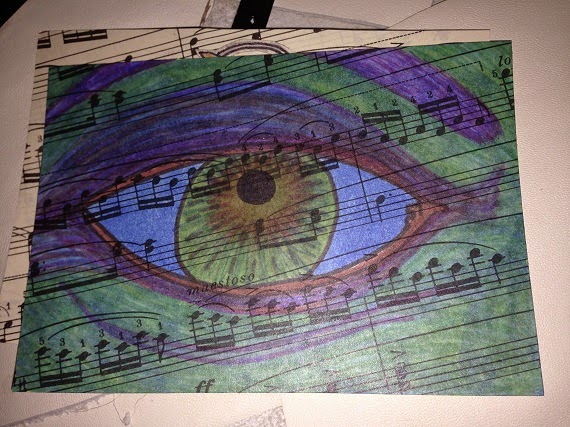 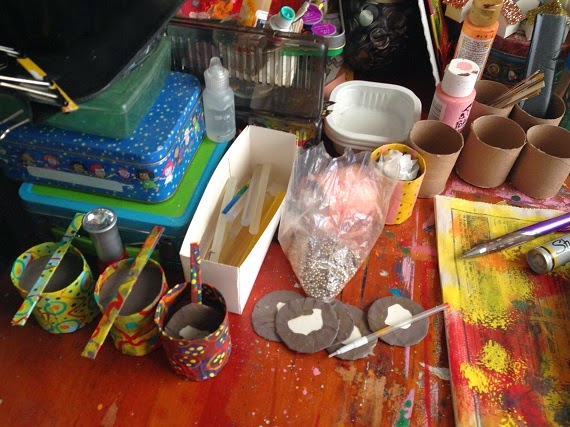 I'm still working on hot cocoa ornaments. Three are ready to be assembled. Five more are waiting ...waiting...waiting.  Eventually I will clear these off the work table and move onto something else. I've painted all the papers I need to finish these. Just need to sit down and put them all together.

I made a couple of little origami books last night. I forgot to take pictures of them before I downloaded pictures for this post. I'll show them to you in the next post.

My intention for the new year is to blog more often so my posts aren't mini novels. Whether that intention happens or not remains to be seen.

I have not made any resolutions for the new year. I never stick with them so what's the point? I make little goals through out the year. And I don't fret too much if things don't work out as planned.
I do wish for the new year to be a good one. The older I get, the more I worry about the state of the world. I worry for my grandchildren's future especially. What kind of world are we making for them?

I thank each of you who come to read my ramblings. And those who comment always make me smile! May you all have a wonderfully healthy and wealthy 2015!

Remember to be good to one another.
It truly matters more than any of us really think about enough.
Peace
831

How did I miss this?!

I love those embroidered balls. The swirls remind me of the painting starry night. Maybe you could use similar colors? That would be kewl! Maybe even some stars! :)

Maybe the dog bed had a defect in the store. I know that sometimes they will destroy it first, before tossing it out.

That hugging pillow looks like it's gonna be a fab one! Looks good already!