Some Progress on the Art Front and Critters

I was sick as a dog for a few days but now feeling much better and back into the swing of things. Cookie baking commences tomorrow!

As is usual for me, I have lots of things in the works and have, since the last post, added more works in progress to the list! Somedays I do feel a bit obsessed! 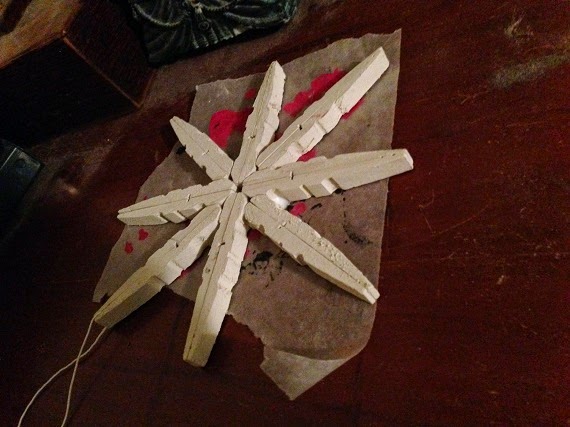 I ran across this clothes pin snowflake ornament tutorial this morning. I promptly got out the clothes pins and made one for myself! Fred dog sat at the back door barking to be let out while I was trying to finish painting these. My fingers were covered in white paint! He waited patiently through about four of them before his barks got louder and closer together. He gave up on the back door and headed to the front door when I had only a couple left. I wasn't real worried about him having to go outside. He's been a pain about going in and out today. I am that dog's butler, but he has to work on my schedule sometimes instead of his own.
I have enough clothes pins disassembled to make two more. I will glitter them all before they are finished.
I put the string on mine a bit differently than they did in the tutorial. I used crochet cotton string and I sandwiched it between two of the clothes pin halves. It is still sitting on the bureau in the bedroom drying so I'm not sure how sturdy it really is. I used tacky glue but I'm thinking it might need a bit of glue reinforcement. 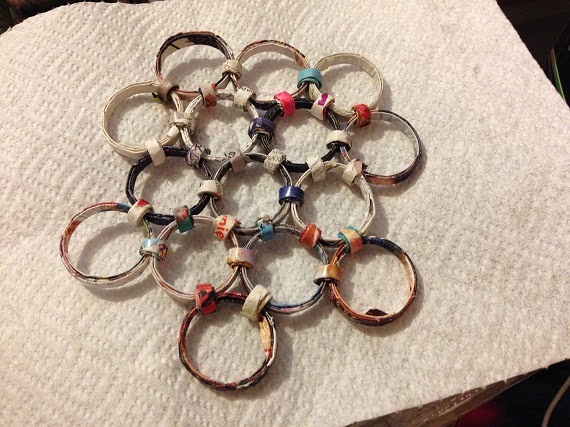 I started another magazine paper basket. It will be sometime before it is finished. The last one took me a couple months to put together.

I really wish I would have saved this tutorial to share! I didn't though. I got all fired up about this cute idea that I shut down the computer and went to the kitchen table to make them. 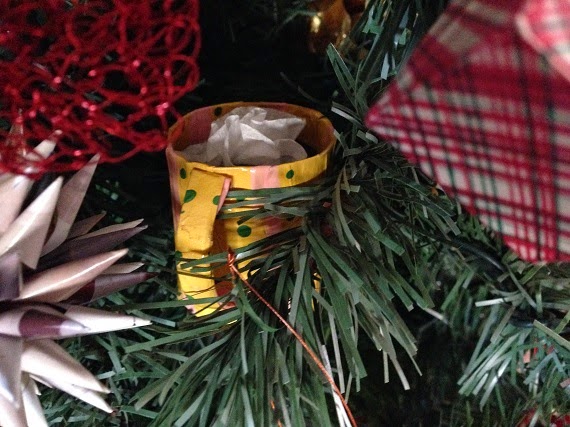 Here's one sitting in the branches of the tree. I started 2 of them the day before I got sick and finished them two days later. 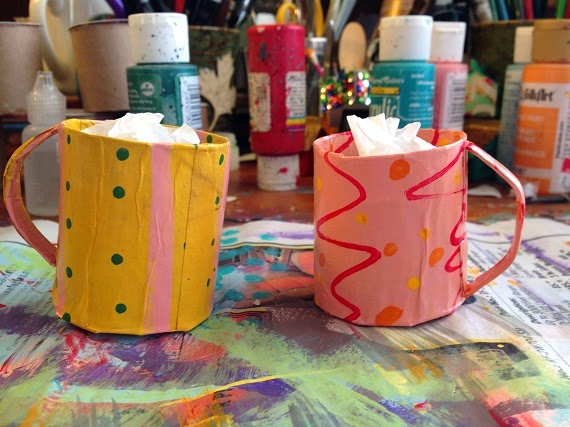 Here are the two I made.
You'll need one tp roll to make two mugs. You'll also need a coffee filter and some chipboard from cereal boxes. 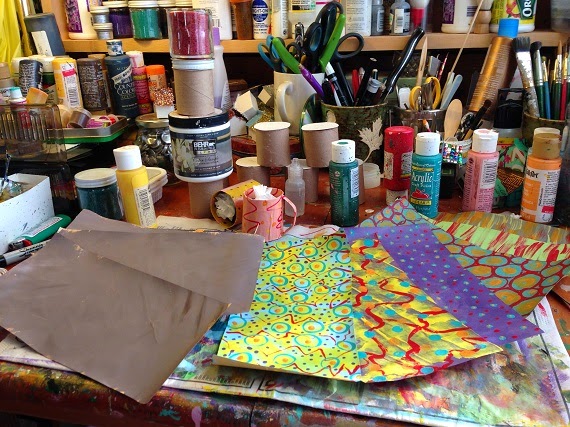 I got out the stuff to make 8 more of them earlier today. I painted the papers that give the mugs their patterns. The brown painted paper is the hot cocoa for the mugs. You'll see the rest of the mugs next time. 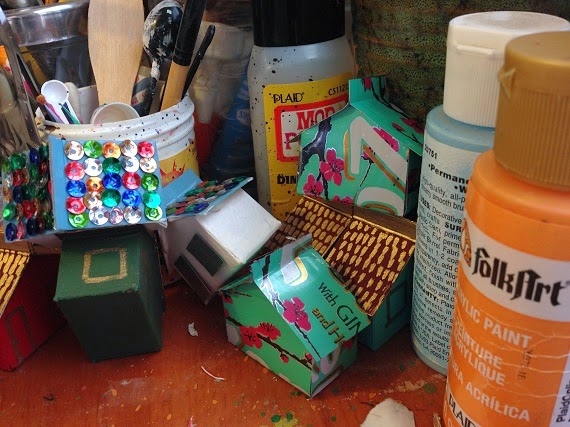 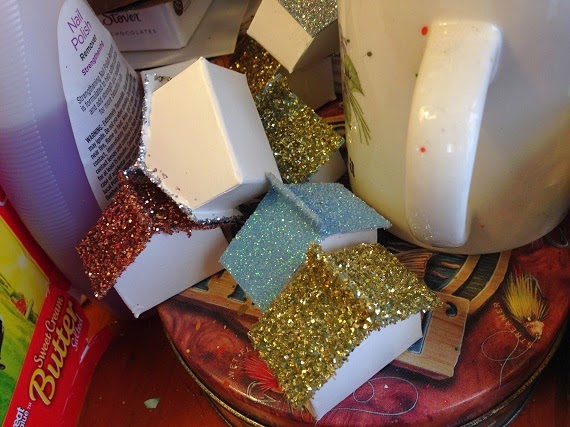 In the comments of a previous post Tandy said something about glittered houses and I got the inspiration to glitter the remaining little houses. I've still no clue what will happen to the white walls of the houses. Perhaps more glitter? 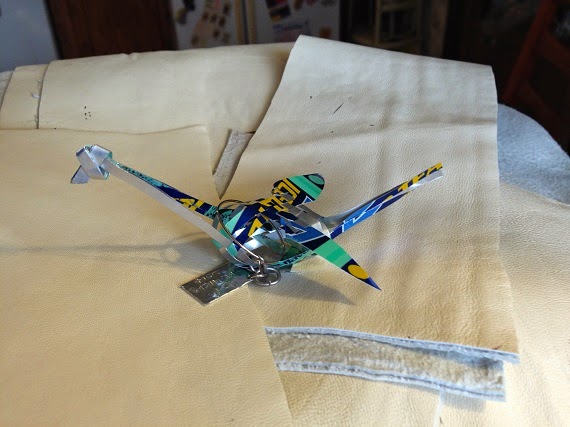 Another aluminum bird. This one has a little tag attached to it. I engraved my info on that little tag and hung it by three links of chain. There's also a shiny wine glass ring threaded through the bird to hang him with. 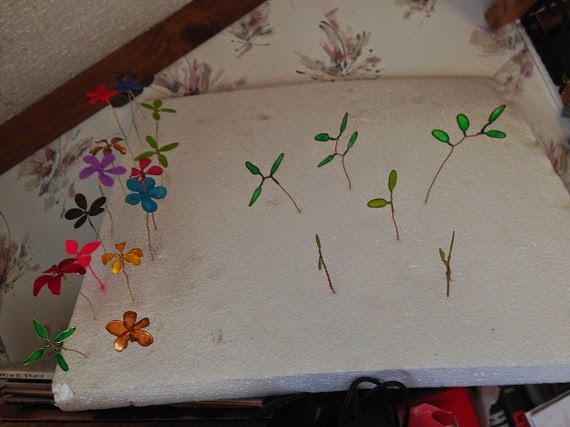 An experiment that actually panned out! Fingernail polish flowers and leaves. More on this subject at a later date. 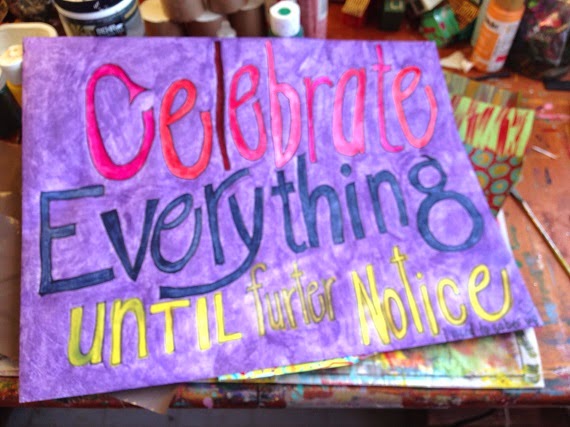 I'm kinda upset with myself about this envelope. I was almost done painting it when I discovered that I cannot spell worth a damn sometimes! This is the time it mattered! I'm still going to send the goods in this envelope even though there is a spelling mistake. Can you find it? 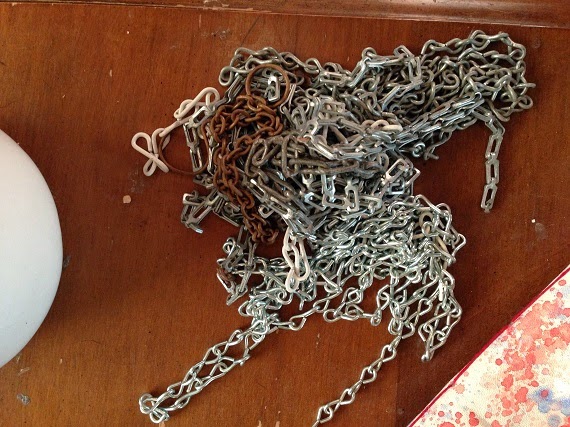 I got a present from my brother the other day. He gives wonderfully creative presents! He also doesn't consider these things he hands off so freely to be presents. They are just things he knows I will eventually put to better use. Sometimes he gets some of the things he gives me back because he overestimated my abilities with the materials.
I'll be keeping this lovely pile of chain though! 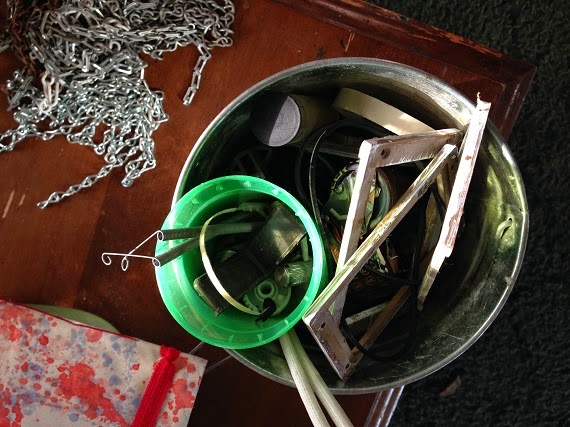 I also got a bucket of cool junk! Weird junk. Junk no one else has. I have no idea what will become of this bucket of junk. I will have to drag out the hot glue gun and see what happens. 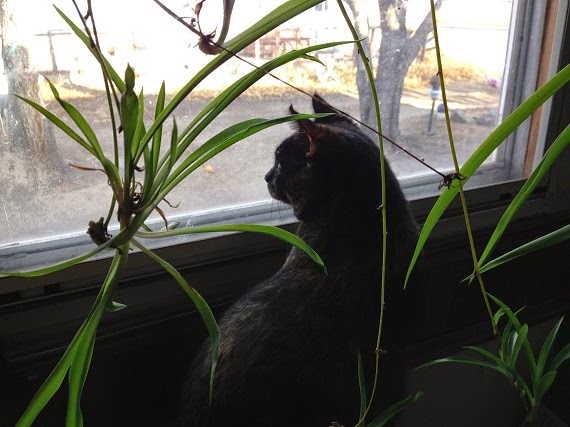 Tippy was sitting on the cat table in front of the window, looking intently at something out there when I snapped this picture. The click of the camera did not deter her from her query. 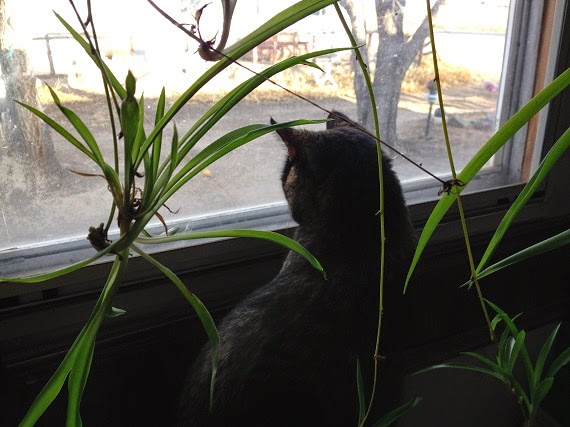 Whatever is out there has moved. 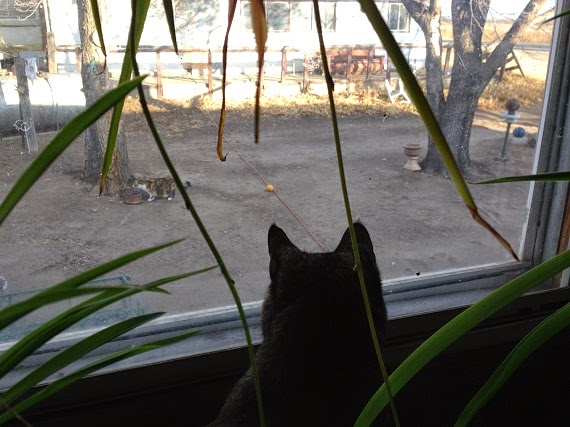 Oh, it's just Lola snooping around the yard.
There was snow on the ground early this morning when I got up. Or was that yesterday? I think that was yesterday that it snowed. Snow was gone before the day was done. It's colder than snot out there though! Tippy and Murray had been out earlier when Fred dog made his first venture outside this morning. Lola refused to go out and took a nap in the middle of the hallway while everyone else was outside.
Fred went out for the umpteenth time and Lola decided that would be a great time to go out as well. Tippy and Murray had come inside earlier. 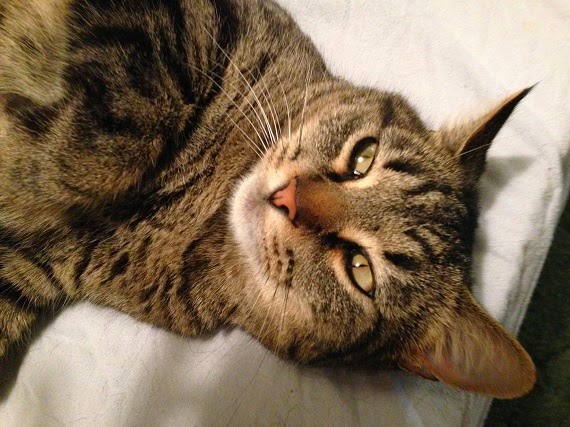 Murray took a nap in my bed all afternoon.

That is all from me today.
Remember to be good to one another.
It truly does matter.
Peace
831

Great works as usual girlie! I luv how that ring basket looks. can't wait to see it when it's completed. :)

I hate when the spelling thing gets me too! Argh! Especially if it's something that I spent a long time drawing. ...I go to add an address, then misspell their name or run out of room. Very annoying! LOL!

Soooooo many wonderful projects, I really think those "cups of hot chocolate" are fab!!
My cat "Blossom" has the same coloring as Murray, she is lazing around in bed today too!!