We Have Shoes Today!

Good Morning Readers!
It's snowing in my neck of the woods again today. Snowed yesterday as well. Not much, but enough to let us know it has done so!
I drew shoes yesterday and that is the artwork for the day. The theme for the week at the 365 Project is shoes and I went haywire with them yesterday morning. Didn't get around to posting them yesterday though cause I had to make a quick dash to Pburg to retrieve my wallet from the place where I took the paperwork the day before. Sometimes I am not too bright!
Hey! But I had the chance to see my youngest son, his wife and their youngest, Gavin.
Fred got to take a van ride, which he enjoyed thoroughly! 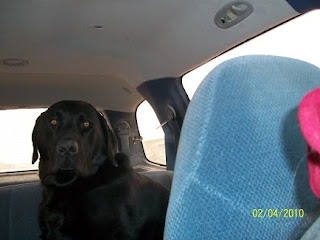 And I got my wallet back! Now, if I'd of gone to the bank while I was in Pburg and transfered some money from my savings account to my checking account, I wouldn't be overdrawn in the checking account this morning. I've taken care of that this morning, first thing after I got up. Nothing like waking up from a dead sleep with your bank account on your mind and remembering you forgot to transfer funds the day before! I'm only 23 dollars in the hole so that's not too bad.
I lollagagged all day after coming back from Pburg and didn't even turn the pc on. But I've scanned the shoes this morning before I even finished my first cup of coffee.
Here ya go! 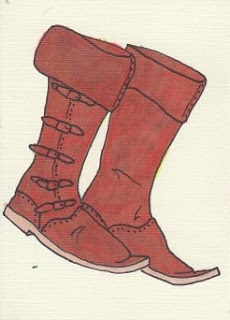 Medieval Boots
ATC
4 February 2010
#35 365 Project
Markers on recycled cardstock.
And I forgot to clean the scanner bed before scanning all these shoes so you'll just have to contend with that black speck...it is on all of the cards! Well, not on the cards themselves, but on the scans! 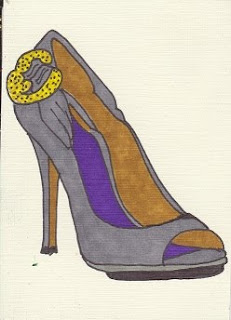 Eavan
ATC
4 February 2010
Markers on recycled cardstock.
Like with the previous shoes, these are titled with the shoe's label if it had one. I don't know the designer of any of these shoes. I tried to stay true to the colors presented in the ads where I found these shoes but not all of them are spot on. I did a little bit of designing on my own with the colors. The Eavan shoe was originally a slate blue color with a gold buckle but I can't reproduce gold with sharpies (I hate the metallic sharpies cause you can't write over the colors with a regular sharpie.) 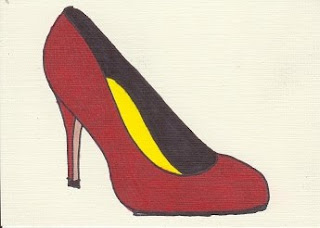 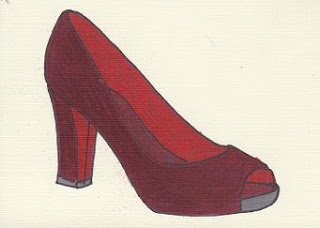 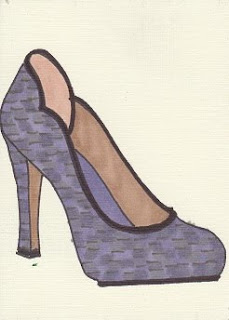 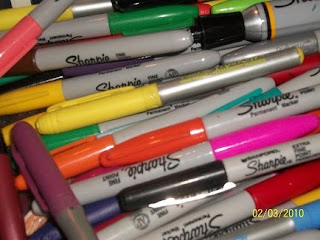 My Weapons of Choice
I don't know what will get drawn today. More shoes, perhaps! Maybe some cats. I just don't know. I can't do any drawing or art of any kind till I get some laundry and dishes done. My oldest son and his family are coming tonight and the youngest may be coming as well with his family. Looks like I might have a full house this evening. I need to do some housework!
Here's a short journey in pictures of the trip taken to Pburg yesterday.
Enjoy! 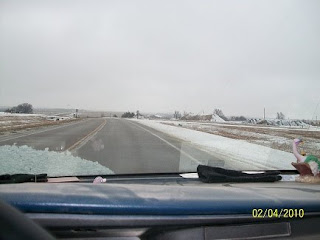 Headed north out of Stockton on our way to Phillipsburg. We just left the city limits. 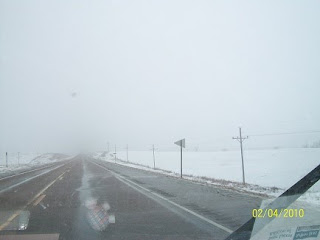 Wow! That was a quick trip to Pburg! We are now headed south on 183 about a mile north of Glade. It's snowing to beat the band! There wasn't quite that much snow out there when I went to Phillipsburg, but it was coming down in bucketsful while I was there. I had to wait for over an hour to get my wallet back cause dummy me went at lunchtime! No biggie. I went to see my son and didn't take one picture while there!
I should have grabbed the camera out of my pocket when Miss Kitty, RW's cat, took out after Fred. Fred likes cats. He doesn't much care what cat. He just likes them and paid Miss Kitty not much attention at all. He was too busy sniffing the floor, the whole floor! He'd never been to RW and Lue's house before so there was all kinds of new smells. Miss Kitty wasn't near as comfy with Fred as he was with her and she kept rushing him, trying to smack him with her front paws. He just looked at that cat as if to say, "What is your problem?!" RW kept a close eye on Miss Kitty so she wouldn't smack Fred.  It was rather funny! But I didn't take out the camera and got nary a picture at my son's house. 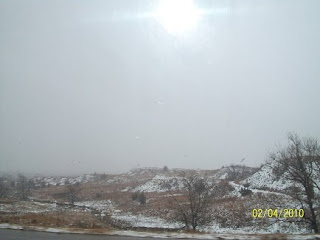 We are now about 3 miles on the south side of Glade in the hills I love so much! Any time of year, these hills are so pretty. I was driving down the road taking these pictures so they aren't the best and this one doesn't really do the hills justice but I wanted to show you all how much snow was here compared to 6 or 7 miles to the north.
Here we are a lot closer to home. I drove right through Stockton to take the back road home cause I wanted to see what the river was doing. Well, it wasn't doing much as you can see in this picture. I stopped on the low water bridge and took this picture looking west. There's a bit of snow on the road though and it was kind of soupy driving on that chalk road from the highway, through the oil field and down to the river. 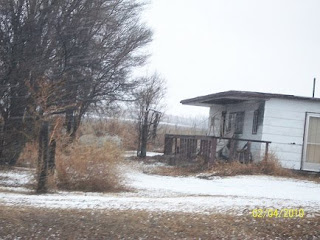 Now we're pulling into the driveway. That's the burned house you see there. The house I live in is to the left of this picture. There was hardly any snow on the ground when I left to go to Pburg. There's a lot more on the ground now, than shows in this picture from yesterday afternoon. 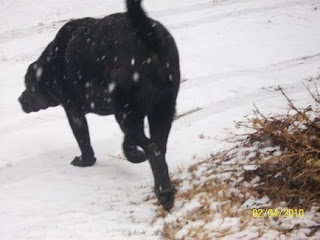 It was snowing pretty heavy when we pulled into the drive. Fred's frolicking in the snow here. He never sits still long enough for me to get a good picture of him. He thinks he has to come right up close to you to get his picture taken. I have hundreds of bad pictures of that silly dog!
The snow was very wet! My youngest son, RW, called me late last night (after I had gone to bed) to tell me he built 9 snowmen in his front yard after I left. He and the three older boys spent hours out there making the snowmen. I am going to take a drive over there this afternoon to see his zombie snowmen. That's what he said they were....zombie snowmen! I'll be sure to take a picture or two! 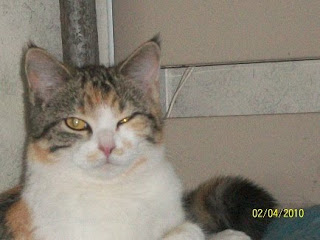 Miss Lola greeted me from the stack of blankets in the laundry room. She and Doob clashed a few days ago and Doob got her good in that one eye. It's looking a lot better now than it did the day it happened. The light seems to bother Lola so she just doesn't open that eye all the way most of the time now. It is getting better though and I think she'll be fine. Miss Kitty is Lola's mama and the pair of them look a whole lot alike. 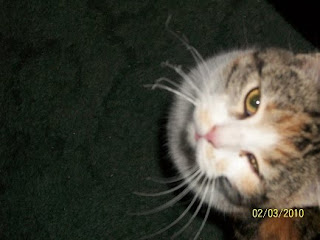 Miss Lola is a mess of a kitten as her whiskers atest to in this picture. She got beat up by Doob on the 30th of January, I think....and a couple days later she decided to help me cook. I had the burner on the stove on in preparation of putting a pan of potatoes on to boil and that stupid cat walked across the burner, burning her whiskers in the process. She's lucky she didn't burn her little feet! She stepped in the center of the burner. She's none the worse for the wear for the scorched whiskers though.
Oh, the day in a life.....
I better get on with my life today. You all get some hugs! I think I'll do the same today!
Peace, my friends!
831
Posted by Donna at 1:06 PM

I'm so behind in blog visits! I've had a nasty sinus infection and I'm feeling a smidge better...I wanted to pop over and see how things were going in your neck of the woods!

Great shoes!! I loved looking at all the photos and I'm hoping to see some zombie snowmen!!