A Bit of Junk Turned into Art (or something like that)

Hello Readers!
I hope you all are doing well and making lots of creative art!
I'm doing alright with a lot of creativity in my life! Not sure if it's art though.
Many things get explored on a daily basis.
Little books are bugging my muse so I'm sure she'll demand we make some soon.
The polymer clay yells at me from across the room. Luckily it's sealed in a tin and it can't yell too loudly.
Origami is always at the ready.
I folded two red foil paper hearts earlier. You all will get to see at least one of them in the next post. Not sure I'll do anything, right away, with the larger of the two. The small one is slated to go in a Junk Magnet. It's junk. That red foil paper is Christmas wrap!
I'm still working on Mr. Kitty, though if truth be told, and it probably should be, Mr. Kitty is not talking to me right now. I stand there and stare at him, wondering what the heck's the next step and he just stands there, silent as the wind! I'll wake up one morning and he'll have hollered at me all night. That's the morning I'll finish him! Can't say when that might be though. It's not up to me. It's up to the muse.
The Valentine Project is coming along nicely. You'll see progress in the pictures below.
Monsters have been invading my thoughts as well and since all the sewing stuff is out, a monster or two will probably make an appearance here sometime in the near future as well.
There's always something brewing!
I dragged out the junk to work on some more junk magnet tops for the swap over at AFA (link's up there at the top right). 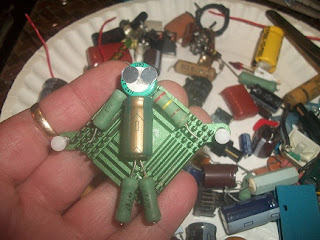 Magnet making commenced yesterday.
I'm thinking I might keep this Green Man Magnet. He's awfully cool! And green is my favorite color!
He's made from nothing but computer parts and a couple of silver sequins. I'm not sure what the purpose of the green piece the man is glued to was for inside a computer. It's made of aluminum and those two white dots on either side are plastic fasteners with metal springs. I couldn't get them out of their holes so they stayed. 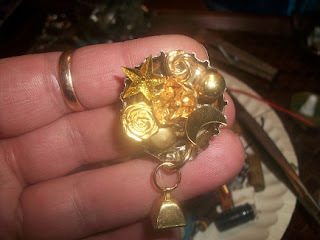 This is a Hornsby's bottle cap filled with a bunch of gold junk. The metal bottle cap is gold colored as well. I put a plastic button in the bottom of the bottle cap so I could slip the gold foil candy wrapper rose into the slot on the bottom of the button. There's a gold plastic rose shaped button, a brass paper fastener (I cut the shaft off it), a glass bauble from a string of Christmas garland, star and moon shaped sequins, a broken earring and a tiny brass cow bell attached with a gold jump ring. I punched the hole for the jump ring with the  crop-o-dile. 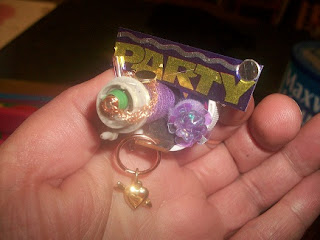 Then we went a little wild with the Party Magnet--I was going for purples in this one to go with the purple of the Party sign. Underneath everything is a pc of cardstock cut from the same packaging the Party sign came from, a little purple spool of thread that I couldn't find the end of the thread on to save my soul!, a purple pom pom, flower shaped sequin, plastic flower bead, a broken capacitor, might be a transmitter, from a broken computer, the copper wire is coming out of that thing and is wrapped around the spool of thread. There is a pc from a broken coffee maker (I think that's what it came from...) atop the spool of thread that the capacitor sits in, a glass tube bead, a couple of silver colored sequins, another computer part I don't know the name of with the copper jump ring going through the hole in it holding the heart pendant from a broken chain. Everything is nestled in a white plastic bottle cap from generic soda. 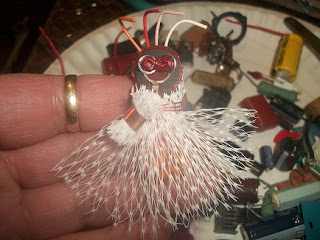 Here's the Parts Bride Magnet
She's made from a piece from a computer, a piece from a broken coffee maker and her wire hair is from an adding machine, I do believe! Her eyes are two silver colored sequins with a couple lengths of copper wire coiled up for her irises. Her dress is a plastic mesh bag from some candy sports balls my sister gave me for Christmas. I wired her dress onto the capacitor/transmitter that is her torso. The bundle of white mesh with the copper crimp is from one end of the plastic mesh bag. 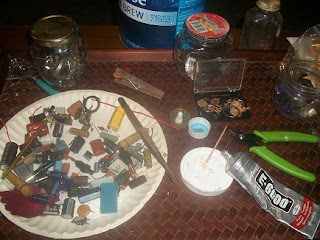 A picture of the junk magnet making station.  The clothespin is holding together the beginnings of another magnet that I will show you in the next post.
I sort things by color mostly, sometimes by type...like with the computer junk on the paper plate. The little jars hold things separated by color.
I keep a little brown paper sack under the shelf beside the kitchen cabinets to drop all bottle caps in. The glue catcher is a plastic lid from frozen juice concentrate.
E6000 will not stick to that plastic, not for long. There are many plastics that E6000 will not stick to. You should keep that in mind when using E6000. 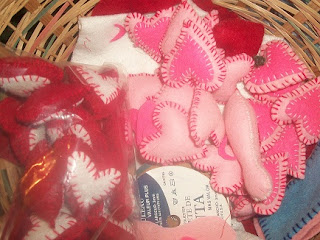 Progress has been made on the Valentine's Project.
I still have six pink hearts to sew onto the light pink hearts and to figure out what the devil the next step is.
My mother said they'd make great ornaments or magnets.  I'm leaning towards two hearts, one of each color on a red ribbon with an origami heart done in red foil paper attached somehow as well. I don't know yet. Figuring this one out as I go along.
That little pink dolly looking thing is the beginnings of a cat toy. It has a red heart sewed on it's chest on the other side.
I sewed a cat toy, complete with hanging string the other day. The cats love it! Lola is always batting it around. Billy mostly ignores it but he's not much a player in his old age. Though I have seen him bat it a few times. Lola gets right in there and beats the living day lights out of it!
Last night as I trolled the interwebs in search of creative things that appealed to me, I came across a tutorial to make these heart ornaments out of paper lace doilies. 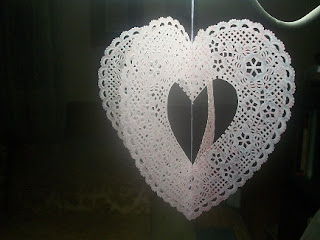 They weren't quite the success I had envisioned, but they weren't a complete failure either. 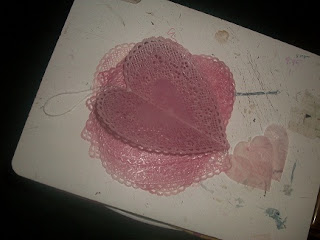 The hanging heart in the first picture is really pink though it doesn't quite look pink.
To do these you need some paper doilies, heart shaped or round. You get a scented candle of any color you wish. I went with a burgundy colored candle that smells divine! Mulberry, I think it's scent is. You need a metal grater to grate the candle was onto the doilies. You fire up your iron, the hotter it is, the faster your candle wax will melt. Play with it, you'll figure out what works best for you. Put the doily between two pieces of either wax paper or parchment paper, I used parchment paper, and iron the candle gratings. You'll need to saturate the paper doilies with the candle wax so if your doily isn't completely covered after the first ironing, put some more grated wax on it, cover it and iron some more. About a tbs of grated wax, I didn't measure, just grated, should about do it.
After you've done all the doilies you want, you'll take two doilies and sew them together down the center. A sewing machine would work fantastic for this, I don't have a sewing machine so I sewed a running stitch down the fold line I made in the two doilies after I folded them in half together at the same time.
You MUST get that stitch line straight as an arrow or the ornament will not hang straight. The wax I used didn't seem to be stiff enough either. My ornaments seem a bit limp. I think perhaps a few gratings of crayon along with the wax would help with the stiffness and it's just add that much more dimension to your ornament! Should have thought about that last night when I made these!
I would opt for smaller doilies as well. Mine are six inches, four inches might be better and cuter. I am a fan of miniature things! You can either cut the center out or leave it in. I did both. The completed heart laying with the others is already sewn. I left the middle in and it hangs worse then one with the middle taken out. Not sure what I'll do with the 2 hearts I cut out of the middle of that one ornament. Something though.
They're translucent, very cool and they smell good too!
Maybe I'll iron them into my altered book?
I really should work on my altered book more often than I do. I have been working on that thing for over two years now and there are a lot of pages still to do something with.
I waxed enough doilies to do 14 of these ornaments. Will have to play around with some crayons added to the waxing and see if that doesn't improve the limpness. Stay tuned, there might be more of the waxed hearts.
Well darn! I took pictures of the things I hadn't taken pictures of and downloaded them from the smart card and now the system has failed and I can't even get to my documents.
Guess you're getting all the pictures you're going to get today.
I'll talk to my cousin and see if he can talk me through fixing this mess!
You all be good to one another!
It matters!
PEACE
831
Posted by Donna at 4:04 AM