An Orange Monster, Polish Stars and Love Is In The Air

Happy Monday!
I made more polish stars (like that would be a big surprise!), I made another monster and I've drawn an ATC since the last post.
Never a dull moment!
Wish that were true....that never a dull moment business but it isn't true cause some times, I am bored out of my gourd! You wouldn't think that could be what with all the things I make, but boredom does set in! I'm bored of the choices of programs to watch on my computer.
I haven't owned a TV in almost seven years and I've no plans to acquire one so the PC is the only means of entertainment of an electronic sort at my house.
Guess I'll just have to explore some other sites besides PBS and hulu to watch programs on the PC.
I was surfing the web the other day and ran across a clip art site that provided inspiration for this ATC. 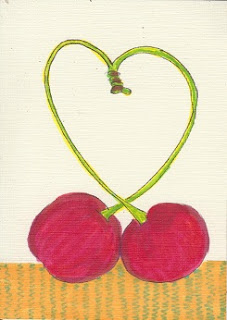 Love Is In The Air
ATC
markers on cardstock
The clip art was just a black and white line drawing.
As I promised, there are more polish stars.
I'm not done making them yet so expect more of them in the coming days.
I cut circles the day before yesterday so I'm primed to make more of these. I like that they are portable and I can cart them around from one room to the next or even take them with me if I happen to go somewhere. 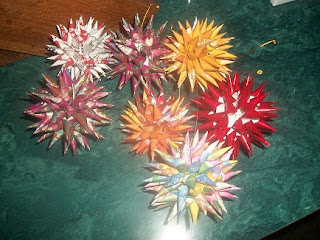 I made seven of them. 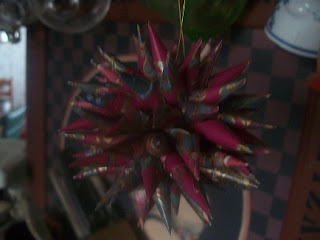 There are two of these burgundy flowered ones. Only one picture though cause I didn't fetch two pictures. And a terrible picture it is!
This is the end of this particular wrapping paper so there will be no more of this kind. 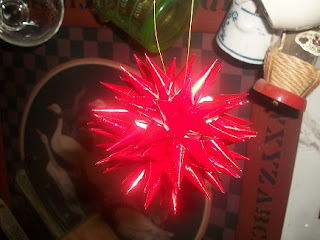 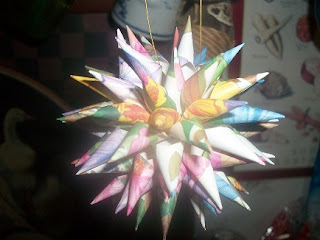 Helena's wrapping paper Polish Star
I'm out of this paper as well, so this is the end of these too. 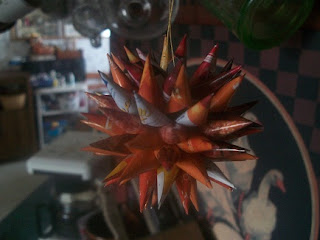 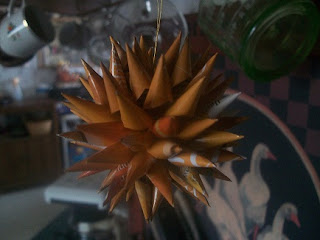 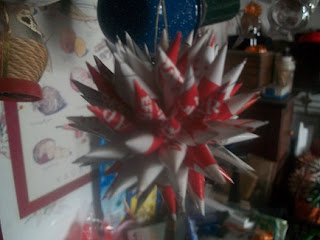 Red and White Polish Star
Another small one.
The paper comes from Recycling Today Magazine.
I am apparently on an 'orange kick' cause I've cut enough circles from shades of orange magazine paper to make at least six or seven of them! That citrus fruit catalog provided MANY circles of lovely oranges!
When I woke up yesterday morning I had a hankering to do some sewing. This orange monster appeared after an hour or so of cutting, sewing and stuffing. I rather like him with his red eyes! 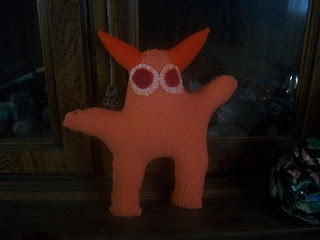 He's about 8 inches tall, made from an orange acrylic sweater for his body, an orange t-shirt for his horns, the collar from that orange t-shirt (guess you'd call that a  polo shirt, not a t-shirt?) for the white part of his eyes and the red part is from a red fleece shirt. And he's filled with fiberfil, sewn with orange crewel embroidery yarn.
I do not know how to do crewel embroidery. I got a sack full of crewel embroidery yarn for less than a song a few years ago and I'm slowly using it up on these monsters and some of the dotee dolls made last year. You all might see a few dotee dolls in the next few posts. I don't really need to make dotees, I've got close to  2 dozen of them done right now but they're easy to make, they're fun to design and making them soothes the sewing bug! 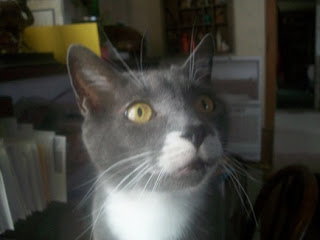 I took this picture of Billy earlier today as he sat on the desk in the livingroom (where he isn't supposed to sit). My sister gave me a round wooden disk that she wants a cat painted on. I'm thinking Billy Boy may be getting his portrait painted in the next few days! He usually has his pretty gold eyes closed when he gets his picture taken. I fooled him this time though. The flash wasn't on!
He has certainly turned into a handsome fella! When my youngest son brought Billy home about seven years ago, he was but a bag of bones and on his last leg! Bill's a standoffish kind of cat, likes most folks but doesn't want a thing to do with me unless his food bowl is empty or I'm naked, fresh out of the shower! He does sleep at the foot of my bed every night though so I know he likes me anyway.
I think a flamingo is going to fly in this afternoon. I'll let you all know how that works out!
Be good to one another!
It matters!
Peace
831
Posted by Donna at 1:26 PM