It's been three days since the last post and I have been busy with projects.

Monday offered a road trip with Ma to go look at some railroad ties. I think they will work for the purpose they're needed for. That really all depends on whether brother is pleased with the working material. We shall see. Those three boys better get busy with that project before it gets really cold! We were turning the corner, away from that big old stack of ties when I remembered I can never forget the camera if I never forget my phone. I have never forgotten my phone. So no picture of that pile of ties or the pretty chestnut horse that was in the pasture next to it.
That trip prompted a ramble through the wildlife refuge at Kirwin on our way back home from Claudel where the ties are. Again there are no pictures because I had not remembered that I cannot forget the camera if the phone is with me. We saw 2 deer, many different kinds of small birds, 2 bald eagles, a small flock of pelicans and lots of scenery that would have made for some great photographs, that I did not take!  We were close to Pburg after the traipse through the wildlife refuge so Ma said we should go get her new windmill tower. That took us to my oldest sister's house. That was a pretty uneventful trip other than being snubbed by Elaine's cat, Sophie and meeting her newest cat, Elmo. Elmo really lives across the street but he insists he lives at Elaine's house. He's a nice boy! Big half siamese critter. Lover boy cat.
I have no cat pictures either.
After Monte loaded up the new windmill tower into the back of Ma's truck, we headed south to Stockton, through Glade. We passed a yard sale sign. Between the two of us we might have had $5 cash. We turned around anyway, just to see what was on offer. It was a 'man sale'....tools galore, car stuff, man stuff. I spied a box of string sitting there on the garage floor and inquired what he was asking for the string. He says, "The rope?" I say, "Rope. String. How much?" He thought about it for a minute and says, "Five bucks?" It was a question. I made up an answer by asking another question. "How bout three bucks?" 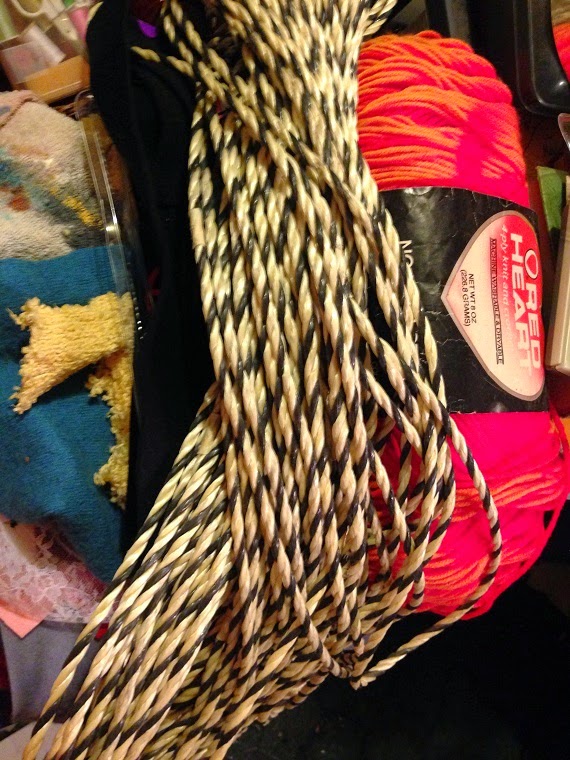 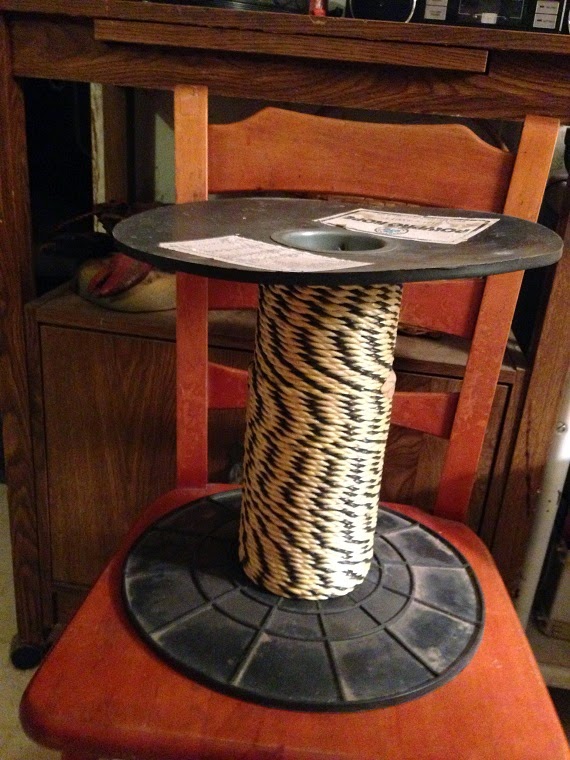 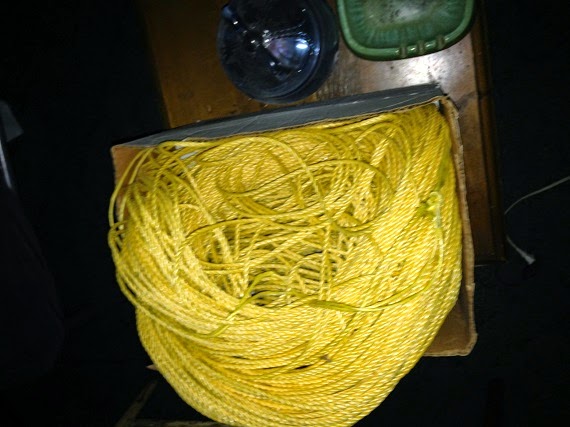 and lots of polyrope. Not sure what this rope, which I DID call string, was originally made for. I can't for the life of me figure out why anyone would need so much of it other than to make things out of it. It's about the size of cotton clothesline cord...maybe a touch bigger. I haven't actually read the label on top of the spool yet. I'll forever refer to it as polyrope.
It is quite useful stuff! 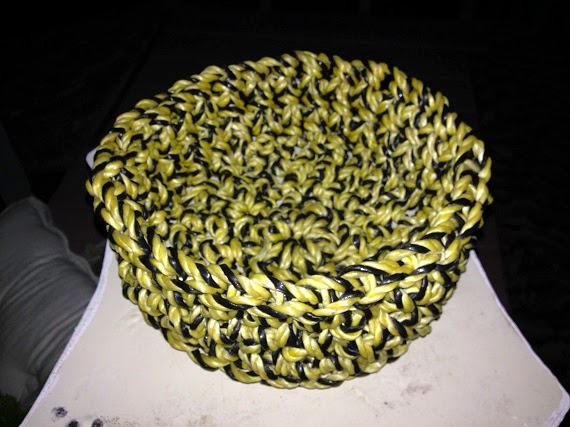 I crocheted a basket. Took me a couple hours from start to finish. I need a bigger hook if I'm going to crochet very many more of these. 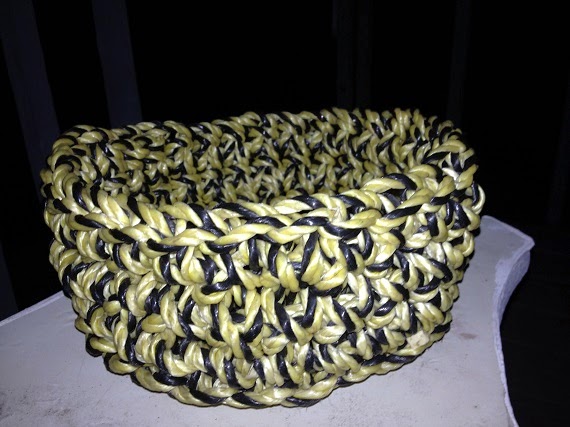 It's about 9 inches across and five inches tall or so. The cord itself is yellow and black which gives a cool design. My intention when starting this basket was to make a very large basket....laundry basket size. My hands soon told me to shut up about that big ass basket I was imagining and just make a nice small basket for the time being. 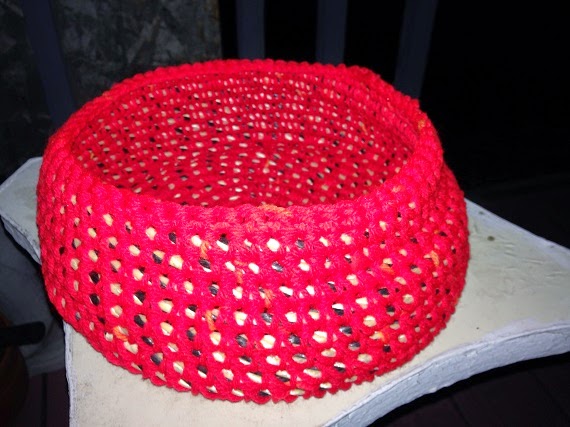 So the next day,  I tried a different route that still involved poly rope and crochet. I like this basket but it will be a prettier basket when I've used the yellow cord with this red acrylic yarn. I have three skeins of this yarn and afghans are not my thing. Where do you think these 15 year old skeins of red yarn came from in the first place? That afghan never materialized fully. It works great for this application. Red and yellow are cheerful.
I wasn't happy with how this basket was progressing. I went for a larger basket than the crochet one. The bottom started curling around the edge so I figured it was time to start the sides regardless what the intention was. This one is about 11 inches across the bottom. The top kept getting smaller and smaller so I decided this one must be done as well. It's about six inches tall. Took me about three hours from start to finish. I can crochet fairly fast. 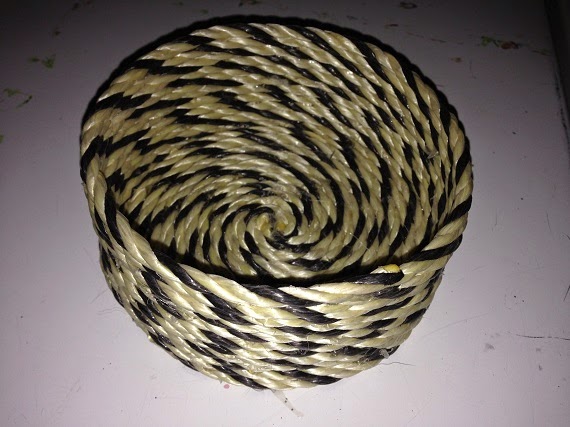 Then I got the bright idea that I could hot glue a coiled basket out of the polyrope. There will be no large hot glued baskets, but it works quite well for smaller ones. This one is about 5 inches across and 3 inches tall. 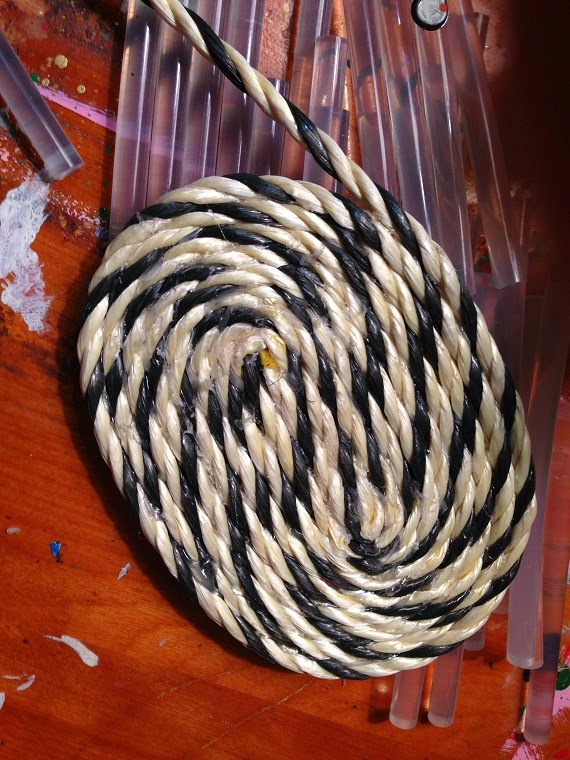 Here's the beginnings of an oval basket that is now finished. I took these pictures just hours ago. Along with this one already finished there is another hot glued coiled basket done. I am not even through the hank of polyrope you saw in the first polyrope pictures. I have enough polyrope to keep me busy for a long time!

I'm still going through all those bottles of cheap acrylic paint and painting newspaper in the process. 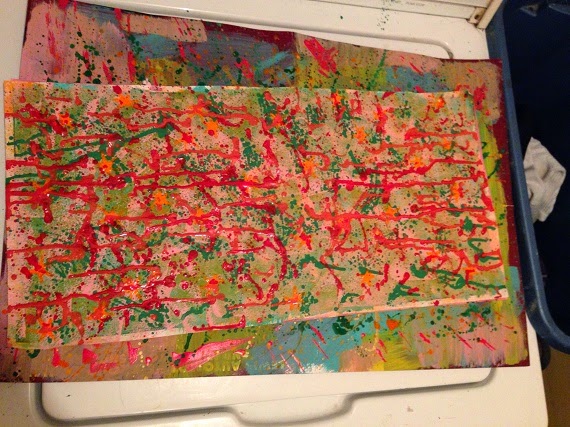 Flinging paint on the kitchen table is not a good idea, really. 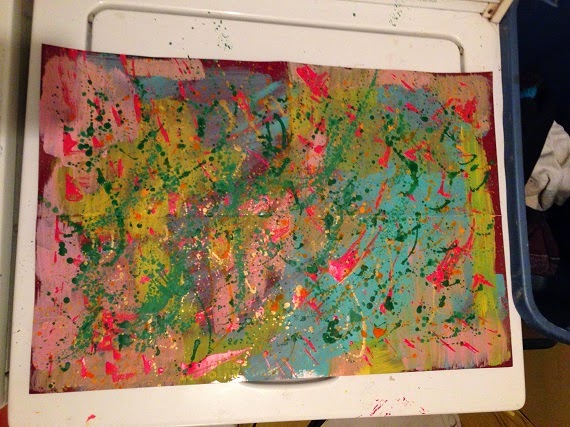 But at this point in my table's life, it has seen many paint splatters. The lace curtains on the window by the table will never be the same again!
This is a very large sheet of slick cardstock that arrived in my mailbox in the disguise of a promotion for a car dealership. It had a cool fake key attached to it too! It will make a great book cover! 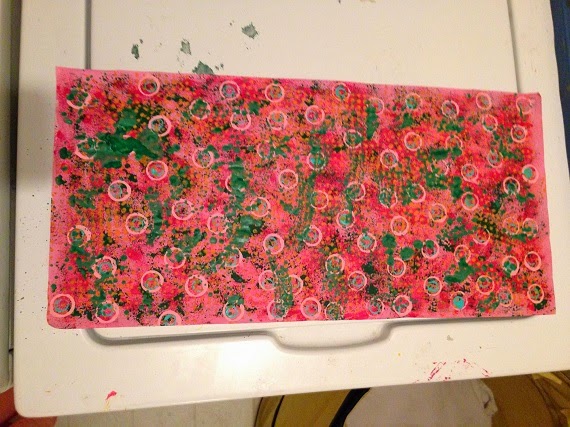 Sales ad. I used my mark making tools besides splattering and flinging to paint this batch of paper. 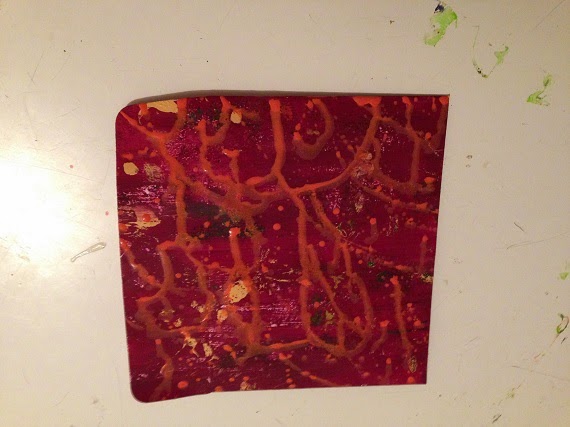 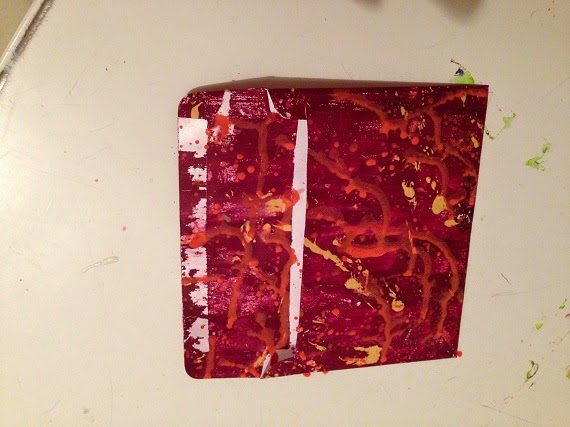 Even an envelope got splattered and what have ya. 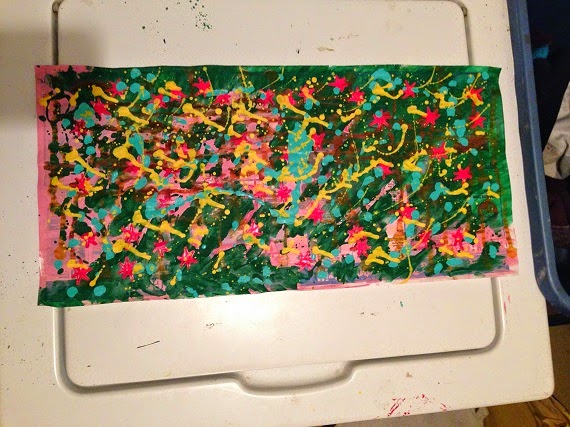 This one is my favorite of this batch. Sales ad. 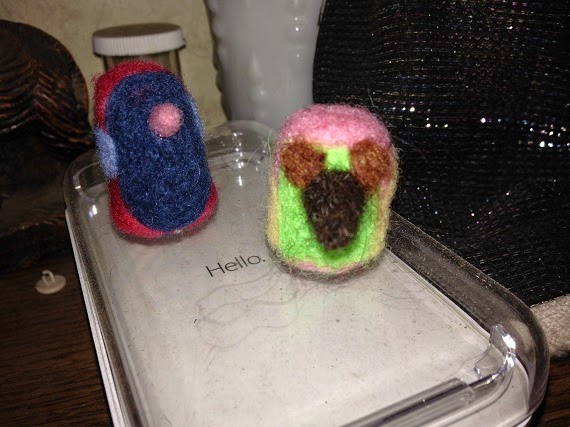 Some little fuzzy birds flew in. There were three blind birds but I think one of the cats carried the third one away. I looked for it on the floor by the shelf in the livingroom where these little guys are sitting atop the box for new smart phone. They need some seed beads sewn on so they can see. 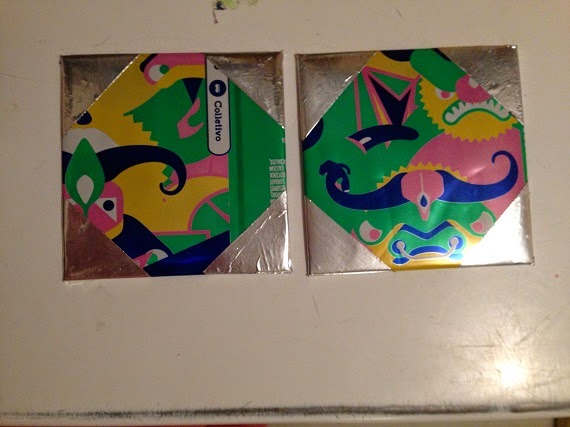 There are still three bookcovers ready to be sewn, one of them has a page block and is sitting here where I can see it! I've gone and added another book cover the stack. This one is an aluminum tea can covering two 4 inch square chunks of a checker board. I haven't decided just yet which binding it will get. It will probably have pink, green and yellow construction paper.

I'm off on another road trip tomorrow. It would have taken place today but someone had to keep an eye on Fred dog so he didn't bother the road construction crew that did their thing past the house this morning. He didn't seem to even notice all the hubbub going on with that giant machine, all those dump trucks coming and going and all those people he could be talking to! They made pretty good progress on their quest to resurface the highway. They probably weren't right in front of my house for more than 20 minutes or so....they moved right along. They were here around 9 in the morning. By 7:30pm they had made it a mile and a half to the edge of town, turned around and headed back toward the east again doing the other side of the highway. Ma and I went to town at 7:30 and they were almost back to the bridge which is about the halfway point from my house to town. I don't know who will keep Fred out of trouble tomorrow. I wasn't really too worried about him being a bother when I was home, but I'm not sure just what he'll get in his head when I'm nowhere around! I may have to wait till later in the day to go to Hays with Ma so that dog doesn't get himself in trouble. I can see him now, unsupervised, carrying that bald softball around, wanting someone to throw it for him....all those men.....RIGHT there. Yeah, old Fred wouldn't hesitate to make it known he needed a thrower. Course they wouldn't know what the hell that fool black dog wanted cause Fred doesn't play ball fairly. He won't give up the ball willingly. I know the routine, I trust Fred's routine. But if you don't know the routine, you will think that dog is going to tear your arm right off! He needs supervision. 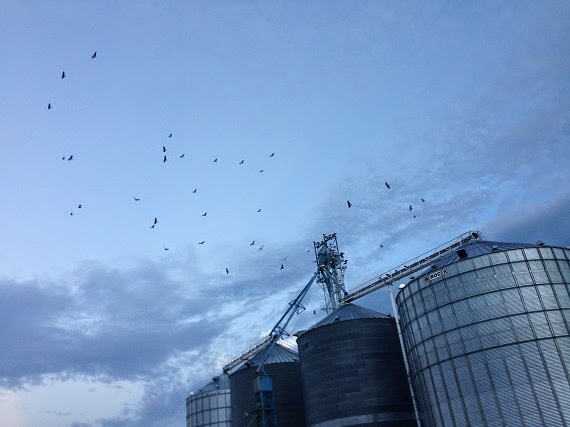 So every evening when the sun is fixing to go down, the vultures gather, smack dab in the middle of town and roost on the grain silos at the Coop (elevator). If you make this picture bigger you can see them all lined up in the center of the tower and sitting along the rails between the silos. I counted about 80 vultures in this picture. 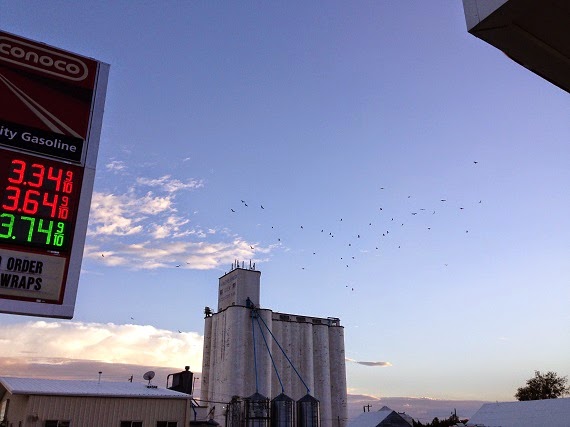 The vultures always make me laugh when I see them at dusk circling above the center of town! I think it is just hilarious that the vultures got their revenge from being ousted from the trees by the cemetary. Now they make themselves known to whomever's coming through our city at dusk.

Before we came home from town we drove south a mile or two and looked at the thunderheads building to the south and east. We were in a tornado watch but got only a few sprinkles a couple hours apart. The sky is really pretty this morning. There are scattered clouds with the moonlight shining through. 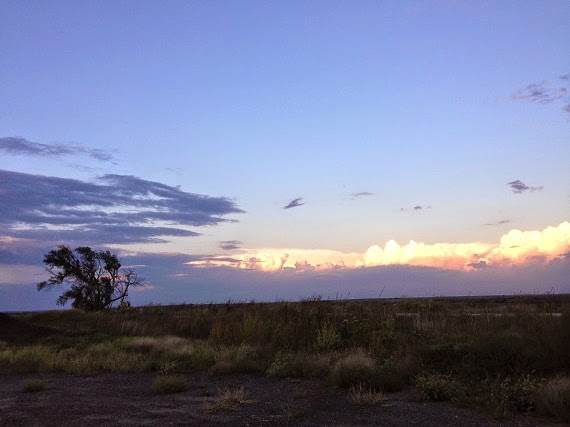 Those clouds were well east of us. They produced some visible lightning but nothing much else weather-wise happened in my neck of the woods. 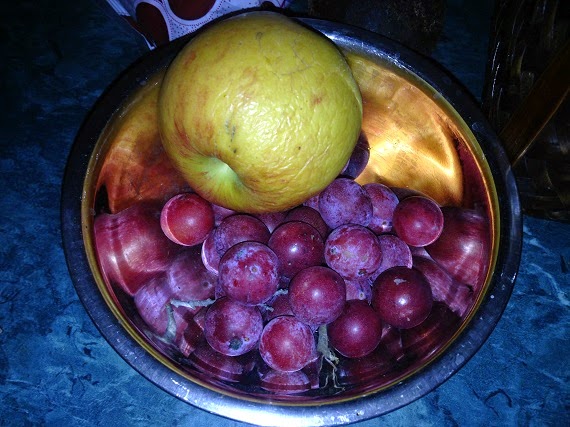 On our traipsing adventure across Kirwin Wildlife Refuge yesterday, we found some sand plum bushes along a dirt road. We only picked the plums shown in the picture. Ma's gimp with her foot in a big old boot, I walk with a cane! We were quite the site in the ditch there! We didn't want very many anyway. I'm going to make a small, a very small batch of sand plum jam. Wish me luck. I've never made jam before! My sister assures me it will be successful. We'll see!

That's it for me today.
Remember!
Be good to one another!
It matters!

I can't imagine how you make SO many art projects! It still boggles my mind!

I really like the basket that was hot glued together...

...I would think that Vultures would look normal hanging out at the cemetary.

It's fun to hear about your adventures with Ma. Tell her I said Hello!

You really do a lot of art and crafts and it looks great!

So creative! I love your photos, especially with the vultures flying about. We don't see much of that where I live.

How funny is this--I had a blog post this past week that featured a picture of grain silos! (But no vultures.) We couldn't make this stuff up. lol