Zippers, Baskets and a Little Purse

I had intended to do another soybean field update but I forgot to take pictures before the sun went down. It would be futile to do it now as it is 11 p.m. and all you'd see is black. Had I gone out there about an hour ago to take the picture, even though it was dark then as well, we may have gotten a deer in the flash. Fred dog was out there barking his fool head off about something in the field. He hates deer so I'm thinking that was what his problem was. He hates the stray cat that is hanging around too, so it may have been a cat instead of a deer. I mostly ignore that dog's barking because almost every single time I go to see what he is on about, there is nothing there that I can see!  Not every time, but most! The other night he was standing on the porch, going off big time so I went to see if there was anything out there he should be barking about. There was a coyote under the pear trees at the south end of the house. Fred was on the front porch when I went out. He promptly went down the stairs and chased the coyote across the highway. I hollered and hollered at that dog to get his ass off that highway and in the house. That was wasted energy. That fool dog came home when he was good and ready! He could care less that I worried about him for half an hour when he was on the other side of the highway, still barking at that coyote. We will have coyote visitors until all the fallen pears are gone. I can't believe those coyotes are eating those pears to begin with! The pear crop was crap this year! Pears all misshapen and hard as rocks!

So anyway, there will be no update on the soybean field in this post. I will try to remember to take a picture tomorrow when the sun is still shining!

On Friday I went on a road trip with Ma. We went yard saling along Highway 36 for the Highway 36 Treasure Hunt. One of my finds of the day was a boot box full of vintage zippers. Most of them had metal teeth...the good kind. 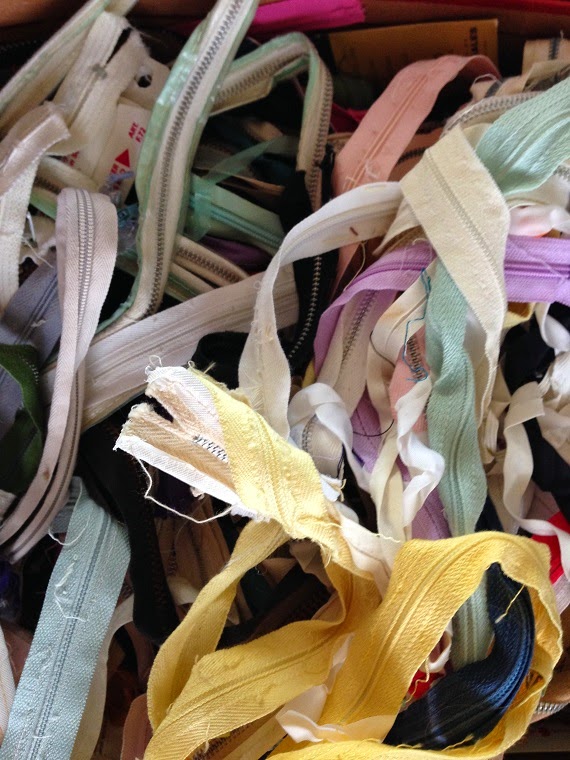 And looking at the picture, it appears most of the ones showing have plastic teeth. Doesn't matter...metal or plastic, they're both quite useful for using as art fodder. 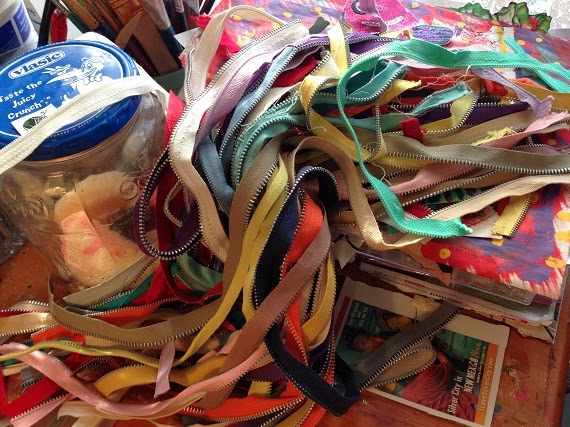 I spent an hour or so watching Dr. Pol on NatGeo and tearing up zippers!
There's something very therapeutic about tearing things up.....

The pickle jar in that picture with the zippers holds my mark making tools for when I'm painting newspapers. I had a bigger jar full of mark making tools and it disappeared on weekend when I was at my son's house. I think Ma tossed it in the trash not knowing just what it was. 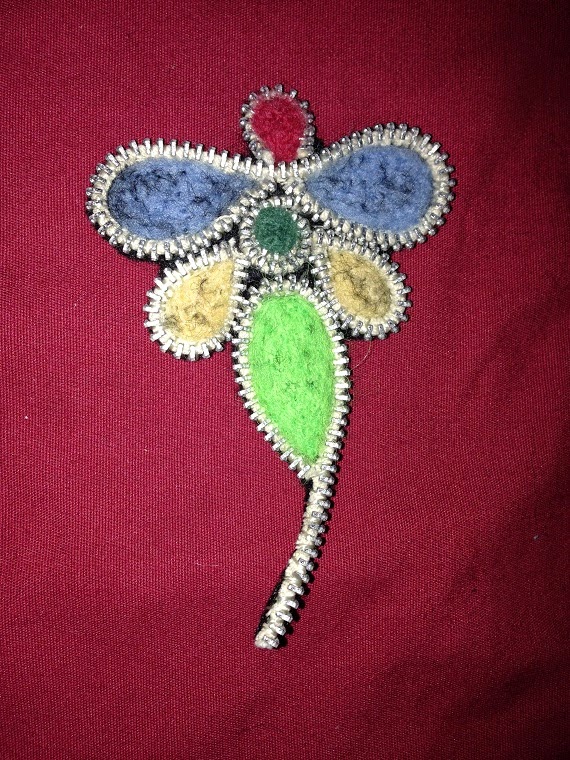 I should be showing the next picture before this one. I started out making roses out of the zipper parts. And on a break, while talking to my sister on the phone, I searched google images for things to do with old zippers. I saw a dragonfly made from zippers and needle felting. I gave it shot. Mine looks little like a dragonfly and more like a deformed flower! I slapped a magnet on the back of this one and now have two fishes and an owl in the works using the same technique. There was no tutorial to go along with the dragonfly...I just winged it. I'll show you the fishes and the owl in the next post. 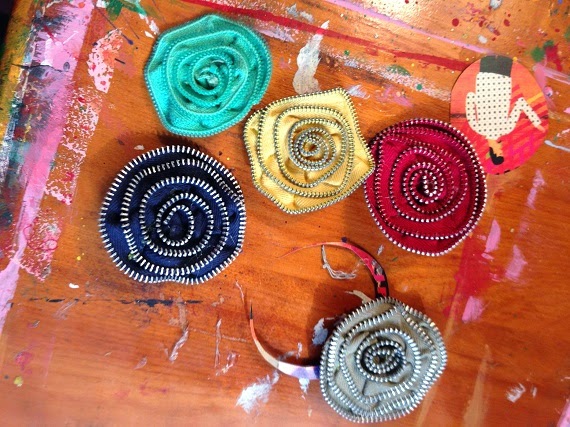 I've made lots more roses than these five since I took pictures.  The more you make of these cute little roses, the better they start looking and the faster they get made! I did look at a tutorial for these, but didn't follow it to the letter. And I didn't save it to my Favorites so finding it again may be a problem. That pile of zipper parts I showed you all earlier will be turned into zipper roses. Not sure what I'll do with all those zipper flowers, but some of them will have a magnet slapped on the backside and called good!  The others? I've no clue! Any suggestions? 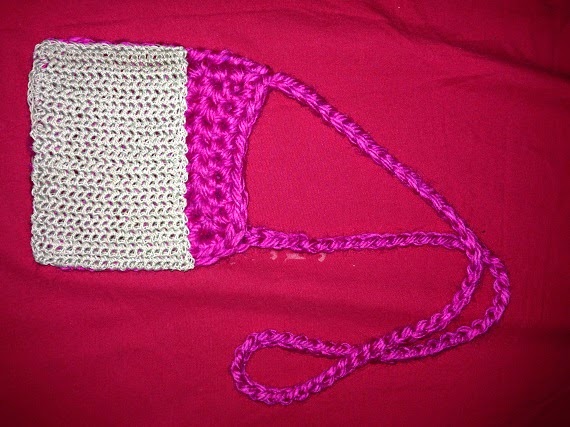 I made this little bag to carry my phone around in when I don't have any pockets. Having no pockets seems to happen more often than not. I was tired of having to hunt it down when I was in another room of the house whenever it would ring. Walking far is not one of my strengths so having the phone close by is a good idea. The green part is a pocket on the outside of the bag. I started off making the entire bag out of that green cord but it was a pain in the butt to crochet. The cord kept twisting around itself and every foot or so I'd have to untwist it to keep crocheting.  I keep my headphones in the pocket. 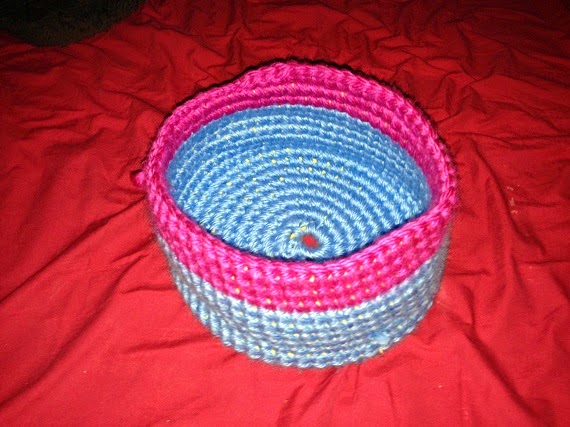 And of course, I'm still on a roll with basket making. This one is yellow poly rope with thick yarn crochet. My sister wasn't too crazy about this one. She said it might be the colors that put her off! I work with what I have! The yarn was a find at the yard sales on Friday. I paid 10 cents a skein for all the yarn I brought home. Most of it was specialty yarn, like eyelash yarn, furry yarn, things of that nature. Not all were full skeins. I had a plastic grocery sack full. I lost count at 27 when Ma asked me a question. I gave them $3.50 for the entire bag. The yarn this basket is crocheted with is soft as it can be and quite thick as well. I made this basket in a couple of hours from start to finish. It started out to be the size of the red basket I showed you all in the last post with the cat in it. It started curling up around the edge so it was time to start the sides before it was actually big enough to put handles on and call it a tote bag. It's just a basket...about 9 inches across and 6 or 7 inches tall.

And I have 4 more polyrope coiled baskets in line for painting. I made the yellow ones yesterday.  Painting them makes them sturdier. I do like the bright yellow, but the brown ones will take a longer beating before they fall apart. The yellow ones will get a coat or two of paint soon.

This is the poly rope used in making the baskets. I'm still untangling that giant hank of yellow rope. Another hour or so and I'll have some more smaller hanks of it sitting in this pile.  I'm showing it to you just because I thought it was a cool picture!

That's it for me today!
Still can't show you the envelope I sent to my September partner as she hasn't gotten it yet. Maybe next post!

No soybean update?! LOL! It's cool, next time perhaps. I love what you did with the zippers. Perhaps you could use some as embellishments on your handcrafted books? Also, I wish I had that many zippers. i would make this http://www.pinterest.com/pin/359021401514145381/

I bought a zipper flower that can be used 2 ways. It has a pin back so you can wear it as a brooch, and it also has a hair clip. I really like to wear it in my hair the best.