Butterflies in the making, A Book, Some Little black hats and Other things

It's cold in NW Kansas today. It rained sometime today. Can't say what time it happened though. I slept the entire day away! I crawled between the sheets somewhere around 6 this morning and didn't wake up till 4 this afternoon when this cat 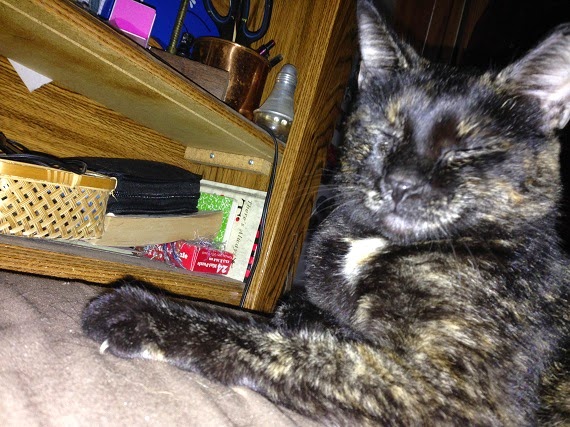 decided to sit in the middle of my chest and drool on my chin. This usually happens when the food bowl has gone empty. That wasn't the case this afternoon. I guess Tippy just decided it was time I stopped studying the inside of my eyelids and pay attention to her.
I didn't even know it had rained until I went to the front door to see where Fred dog was. The front porch carpet was sopping wet and the dog was nowhere to be found. He sauntered in a few minutes later while I was making coffee. He sneaked up behind me and put his cold nose on the back of my left knee.

I broke routine and instead of going straight to the computer like I usually do upon waking, I went to the kitchen table instead. It was a mess on that table!
I straightened things up a bit, whipped through putting magnets on the backs of six little glass sea creatures and affixed another two magnets to a couple of junk magnets that had lost their first magnets. We'll see if model glue works any better than E6000 at holding magnets to plastic bottle caps.

After rearranging and putting things where they should be, the kitchen table looks pretty good. I can guarantee it won't stay organized for long! I'm a messy creationist.

Right now the table is covered with butterflies in the making. 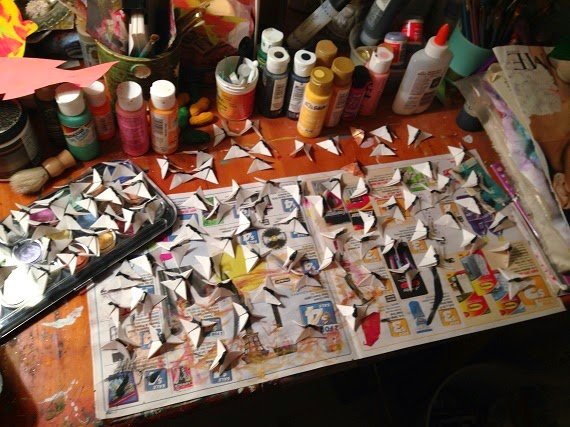 These little guys are a surprise but showing them off won't really give the surprise away. They don't look anything like this now. 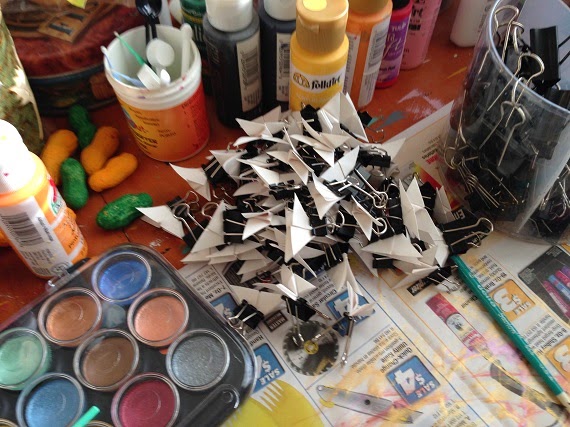 I think there are 83 of them total. They're just computer paper cut into 2 inch squares and folded into a butterfly. I'm hoping this experiment with the origami butterflies is as successful as it was the first time I made origami butterflies. These will end up on an adventurous journey through the U.S. postal system if all goes according to plan. 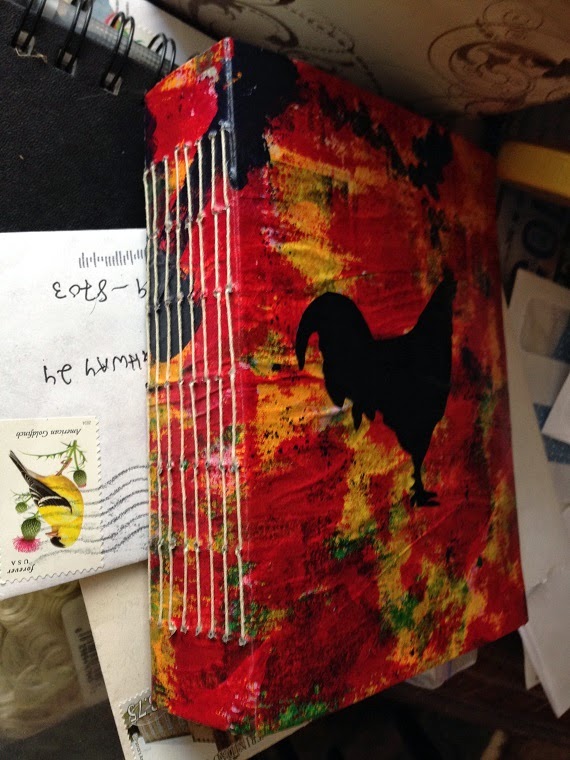 Terrible picture! But the book is done finally! Got another one done but no picture of it yet. The rooster is a cut out glued down before the last coat of varnish went on. I'm pleased with this book. It is about 5 x 7 inches, 8 signatures, approx 100 pages. White copy paper for the pages. The cover is made from a cereal box with painted newspaper covering it. 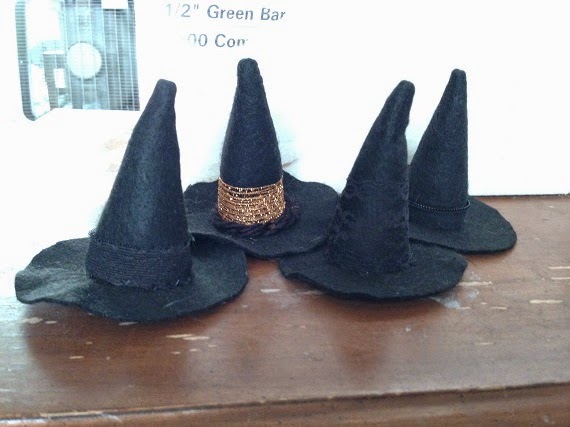 I made four little witches hats out of black felt and various black (or gold) embellishments for the hatbands. These are LITTLE hats! About 4 inches tall. Cat size. The cat was none too impressed though! I'm really sorry there are no pictures of Lola wearing one of them. I forget which one I sewed the piece of elastic to...as I said, Lola was none too impressed. She made terrible faces and wouldn't even look at me for hours after having wounded her dignity. No self respecting cat would willing wear such a hat! I didn't even try to get Tippy or Murray to do the modeling. I'll have to book a session. 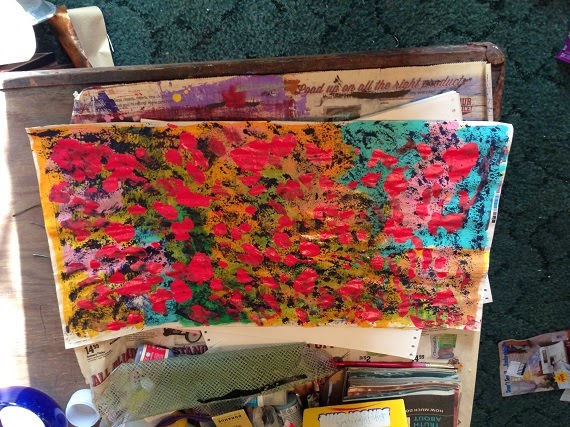 I'm gearing up to start another fish picture and I was going through bottles of cheap craft paint, figuring out which ones were worth keeping. I painted some more newspaper in the process. 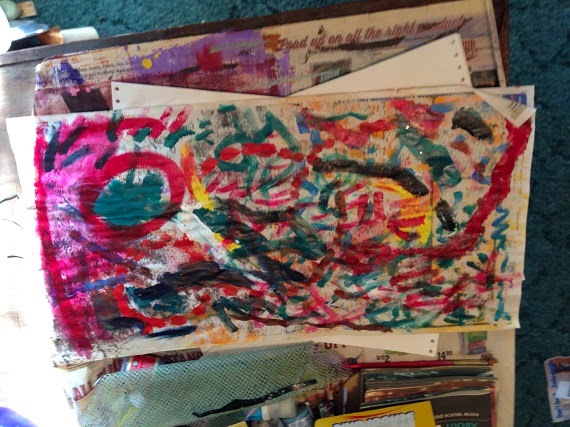 I have a LOT of cheap bottles of craft acrylics. Some years old. Some dried up and useless. Some full of 'boogers' yet still somewhat fluid. 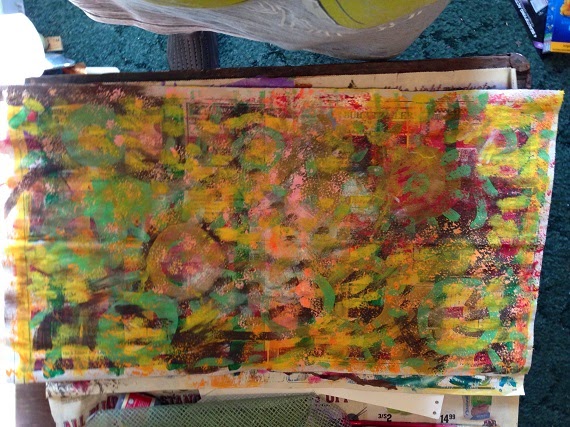 As I sorted, I painted. 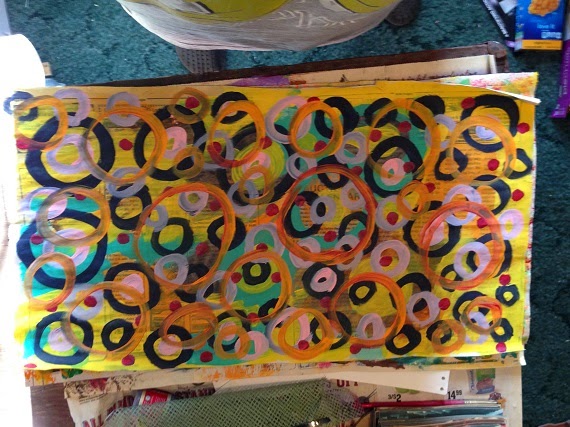 I saved the bottles with 'boogers' for the fish picture. 'Boogers' present texture. Perfect for an underwater scene! 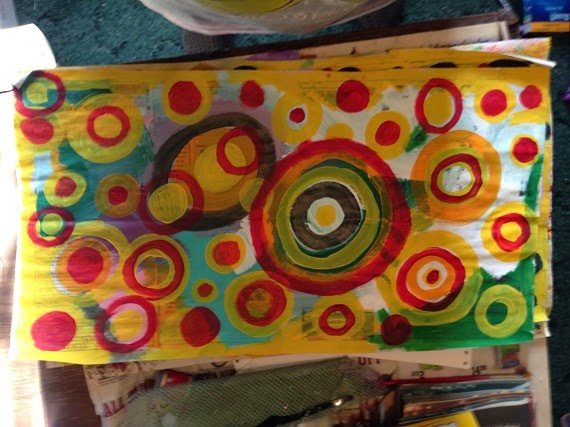 All these painted newspapers will probably end up being book covers. 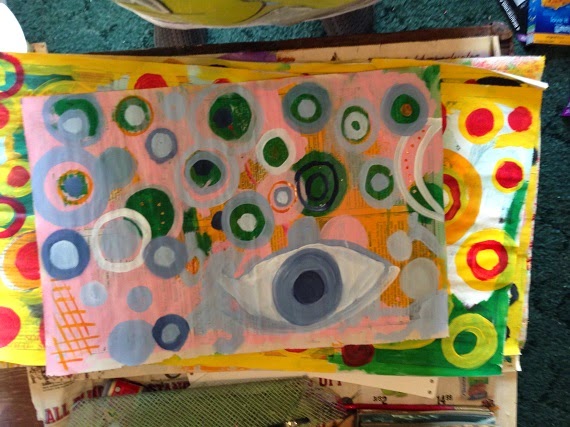 I like painting these things cause there is no rhyme or reason to it. No thinking required. That's a good thing because sometimes, my brain needs a break from thinking. 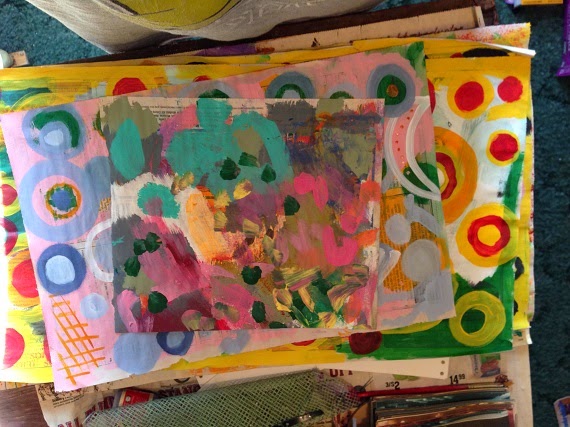 I'm thinking to make some pamphlet stitched books out of some of these. I seem to be having a time with actually sewing the books together once I get all the elements for a book ready. Pamphlet stitch gives quick results. I really like the way long stitch sewn books' spines look though.  That's a good thing too, because there are still four book covers needing sewn with the long stitch. 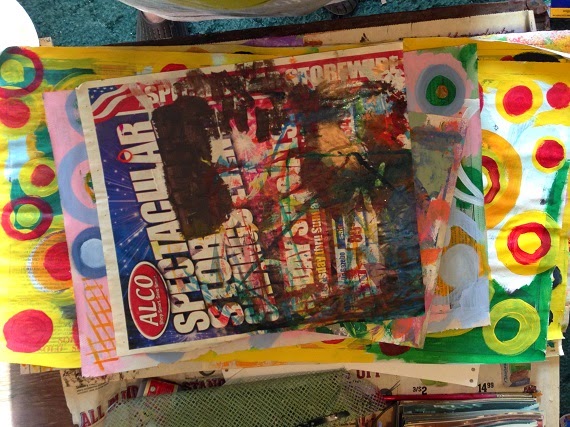 This newspaper needs a bit more painting. I usually use the sales ads for these paintings. The reason for that is because the sales ads are usually just a tad smaller than the regular newspaper pages and they fit better in the space I need them to fit. 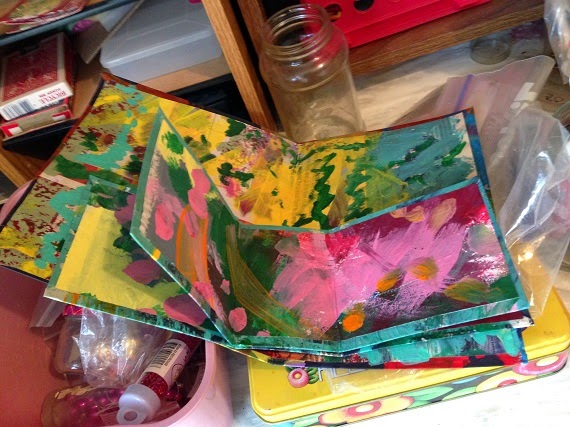 The four book covers still needing sewing. Still need to cut the page blocks for these too. 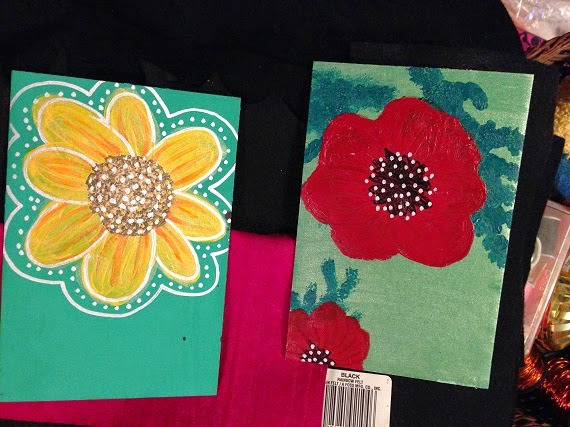 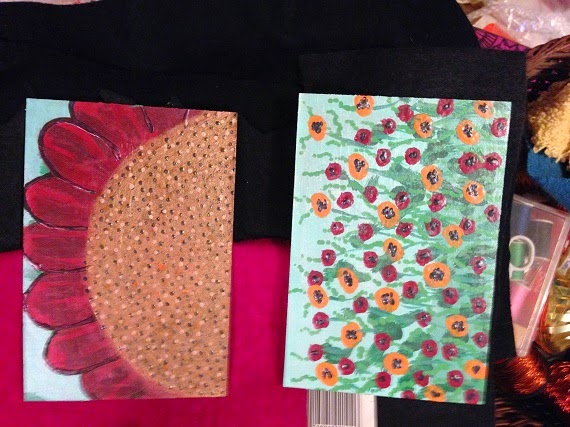 These are the picture sides of the postcards.
Both are 4 x 6 inches done in acrylics on mat board.

That's all the art until next time. As usual, I have many irons in the fire so who knows what will appear in the next post! The butterflies should be done and headed on their journey before the end of next week. I have a couple of ATCs done that need photographed and there's another basket in the works as well. 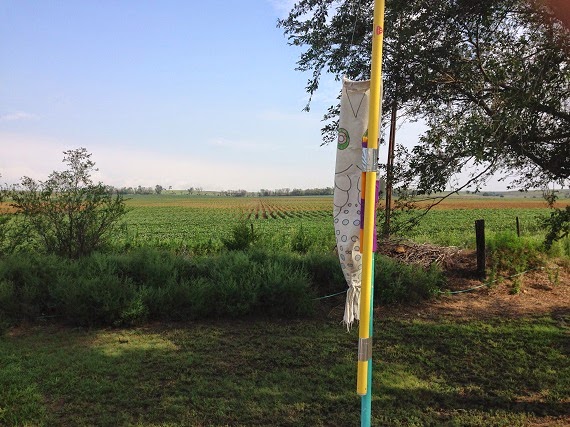 Here's an update on the soybean field north of the house. I'm not sure when soybeans get harvested. The middle of the field is all brown while the outside perimeter is nice and green. Are the soybeans allowed to dry out before they're harvested? I really know nothing about growing soybeans! Good thing I'm not in charge of that field! Guess we'll just have to wait and see what progresses with the soybean field.

Thanks for stopping by and staying to the end!
Remember....
Be good to one another!
It matters!
831

Donna I love those books! The newest painted newspapers are gorgeous....I hope you tell us what happens with the butterflies...so mysterious! ...and maybe I'm weird but, I wanna know what happens to the soybean field too!

Opps, forgot to mention...I plan on posting something new on my own blog tomorrow....I will mention that you also have a fresh post....