A Blue Horse and Some Chatter

Here's that Blue Horse refered to in the title of the post. 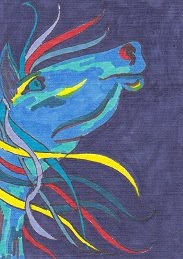 It is the only piece of art I have to show for today. I drew it early morning and am, at 11 pm getting it scanned and posted. It surprised me that I had to force myself to draw this morning. I gave it my all once the pencil hit the paper, but I really did have to talk myself into picking up the pencil.

I suppose tomorrow I will be ready to pick up the pencil...or maybe a collage is in order. Who knows! Something will happen. Hopefully more than just one piece of art.

I gave my brother a call about 9 a.m. I found him in my gargae cleaning copper wire from the trailer house shed. I have been with him all day long. We worked in the trailer house shed today. He tearing walls out and carrying boxes for me while I went through said boxes. That man is a slave driver! Takes after his mother! LOL We did accomplish a lot and I do need someone to motivate me to get things done sometimes. So I do call him and my mother a slave driver only with affection.

I found a few things out there today I had either forgotten I owned or thought were gone for good when the house burned. Some good surprises, like the picture of RW from the mid 90s with his hair bright blond and in a mohawk. Made me smile! Some not so good surprises, like that other picture. That made my heart sorrowful. All in all, it's been a very good day despite the tiny hurts from the past creeping in.

After our three hours labor in the shed, brother and I were dirty, tired and hungry. And quite satisfied with the progress made. All the boxes out there are now ready to be moved to the burned house. There are a few boxes that need to come in the house as well. I found a whole box of crafty type crap out there today.  A lot of that crap comes in the house.

I was really surprised to find that cabinet that had gone through the fire still had things in the drawers that I thought were surely gone, never to be seen again! A whole drawer full of calendars with quotes. I've collected those things for years....there must of been two dozen of them in that drawer. I've acquired almost that many in the five years since the fire.

I wish I had taken the camera out there with me. We made a lot of progress.

Our aim is to tear the trailer house down to the ground. Get rid of that eye sore! To do that, everything that was in it had to be moved to the burned house. The burned house is a sound structure I used to live in that burned on a Tuesday morning in the pouring rain! The house was burned extensively in the livingroom/diningroom and it is not livable, will never be. It is sound though. The roof only leaks in one place and the concrete floor could careless about that leak. There are no walls, only studs to separate the rooms, no ceiling, the flooring gone to the concrete slab the structure sits on. We finally got all the windows replaced. What the burned house truly is is a glorified storage shed. A big glorified storage shed. That's a good thing for a packrat like me.

At the beginning of November that trailer house shed was filled to the rafters with all kinds of crap. Some of it truly CRAP. The trash guys did not like me for about 5 weeks in a row. Those trash cans out back were over-flowing and then some from all the garbage we threw out. Our metal pile grew considerably in that time as well with all manner of metal things going in the pile. We narrowed it down to one roomful in the burned house. That room will be FULL, stacked to the crossbeams by the time all the boxes I went through today are in that room. I already have one room almost full, stacked to the rafters out there. It is full of presentation folders (that recycled cardstock), lighted signs and other manner of good stuff! That's the room I have reserved for the crap should come to the studio, which is in the house, but can't come in the house cause I have too much crap in here already! An artistic packrat needs a lot of storage space! Least that is what I tell myself!

The goal for that room full of crap from the storage trailer is to get rid of it. Sell it. Be gone with it for good! I moved out here better than seven years ago and that trailer house was already full when I bought it with the house. I've sold much out of that shed in those years but keep bringing more crap home. I'm on a spring cleaning endeavor. And Sammy is my handyman. He is a quite handy man! He converted the garage in the burned house from storage spot into a working garage/shop. None of this would have occured had Sam not motivated me to get something going with that perfectly good building sitting there. And I am more than ready to get rid of that trailer house. It was falling down, with everything still in it, all on its own from the elements and the rodents.

My oldest son and his buddy spent months cleaning out the burned house in preparation of cleaning out the trailer house shed. This has been an ongoing projec that is coming to the end at quick clip. That's a good thing!

After our hours of labor we went to Pburg to have lunch and to see RW, Lue and the kids. I find that picture of Rich with his yellow mohawk in the early afternoon and a few hours later there he is with his toenails painted blue. I can only shake my head and smile. RW is now 25 years old now. He was probably 17, maybe 18 when he had a yellow mohawk. He ain't changed much in that respect. He always did like to make statements with his hair. I always knew something was up when he'd come home with a new doo. I couldn't tell if that something was good or bad just by his actions with his hair. Sometimes he was doing it for laughs and sometimes he was doing it to show someone he COULD. A lot of folks thought Rich doing all those crazy things with his hair just made him crazy. I never saw it that way. That's just Rich, he means no harm.  Today when he showed off his blue toenails he was beaming, grinning ear to ear. I loved what he said. Lue had asked him to paint her toenails blue and in return she painted his toenails blue. Rich was quite cool with the idea!  Sam asked RW what he got out of the deal beside blue toes. RW said, "I got my wife's love and affection."

I got a lot of hugs at RW's house today. I got to tickle 4 yr old Gavin and hear him squeal. He loves to be tickled! I got hugs from Gage, Grant and Gabe. And my son actually combed his hair so I could see what he looks like now adays with it combed.! :) Rich never combs his hair. Still making statements with it, I guess.

I had a good visit with the boy and his family.

When we got back from Pburg I came home for a little while to let Fred warm up a bit as he'd been outside the whole while I was in Pburg...an hour or two. Then I headed to town to Sammy's house for a couple of movies. The Full Monty was hilarious. The ending disappointed me greatly! A Perfect World was an excellent story, a good film.

Then I came home and here I am.

Ready to go to bed. I've been up since 7 am. I need a shower and some shut-eye!

There will be more art tomorrow. Go get your hugs! They really are essential!

the horse is gorgeous! no surprise there!

sounds like you had one heck of a day and got a ton accomplished, pat yourself on the back...well done! I am fighting a cold and didn't get doo doo done yesterday...

Hey Donna! I'm so glad you liked my photo of the Least Bittern! I'm honored you want to use it to sketch! Feel free anytime, if you would could you post what you do sketch so I can add it to my blog? Of course I will give credit to your art happily!!

If you're ever interested in other animals, let me know, I have tons of bird photos and others too!!