Maybe I've gone daft, but this doesn't work the same way as it did the last time I made a post.... Yeah, the pictures were easier to upload but now I can only type with the text centered? Hmmm...guess I'll have to play around with the newness.

Hello! Thanks for stopping by today. If you're in the mood for art, you've come to the right place cause we've got some art today. Lots of peppers in the mix. Chili Peppers are the theme for the week at the 365 Project so expect some more (perhaps) before the week is out. 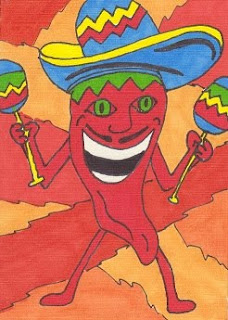 Markers on recycled cardstock. Inspired by clipart found in a google search. 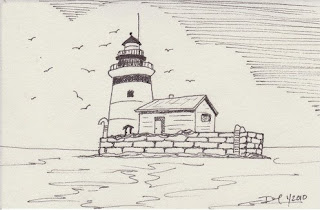 Gonna really have to play around with this new format! Nice to be able to put the pictures where you want them but .....

This is a pen and ink drawing I did for a moleskin for PennyQuilter over at AFA.

I actually started this drawing on the 18th but I finished it early this morning. 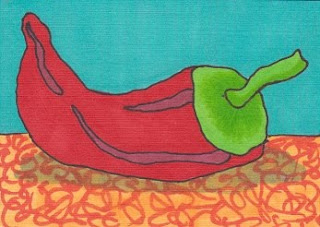 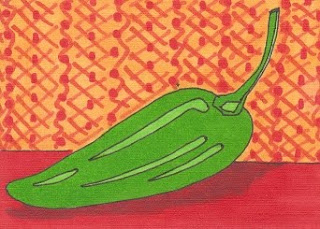 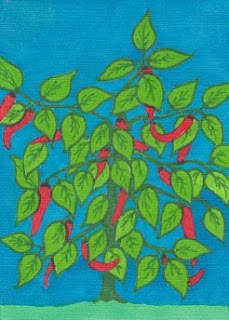 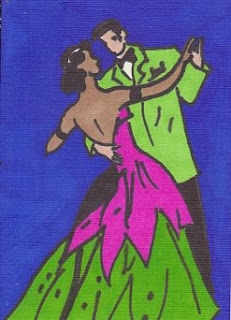 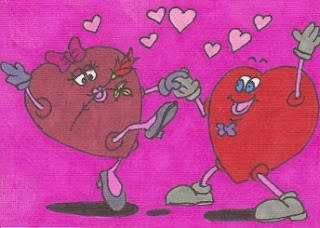 Inspired by clipart found in a google search.

I didn't get to post yesterday cause that damned fibro kicked my butt again and I was asleep by 6p.m. The two done yesterday were done early morning but I had other things to do yesterday and never got around to scanning before I was way too wore out to do so.

I never did get to see my youngest son and his family this past weekend. Not sure why they didn't come over but I'm headed to Phillipsburg this afternoon to see them. I will do that if I don't go to Kearny, Nebraska with Susan this morning. I'm not sure if she needs someone to drive her there for her drs. appt or not. She never decided yesterday when I saw here. Maybe her son will drive her...if he doesn't I will. I'd like to see my own son and take that paperwork back to Pburg today but I may have to change those plans...still yet to see. 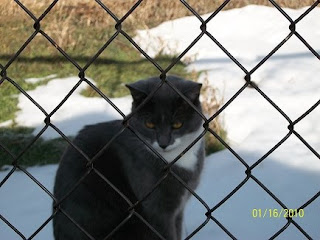 I finally got a picture of that silly Billy cat with his eyes open. He is a pretty boy! There is a lot of snow inside the pen at Susan's house, which is where Billy is sitting when I took this picture, yet there's green grass under that snow! 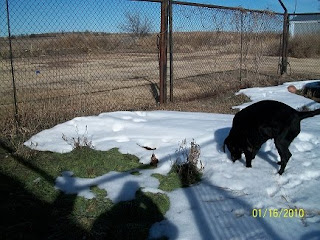 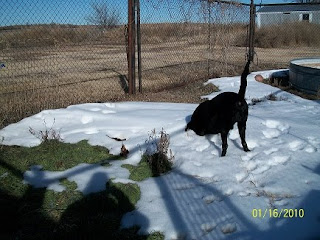 There were field mice, perhaps a rat, under the snow cover inside the pen. You can tell how deep that drift is by the way the dog is standing in it. He has his nose buried in the snow. He eventually dug clear down to the grass, trying to get whatever he had smelled there. He was adamant about catching that varmint. He never did though. The snow was quickly melting in the sunshine. Temps in the mid 40s F that day. 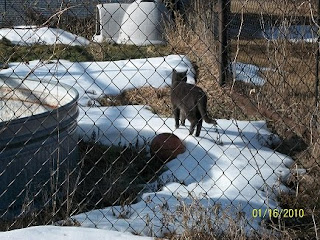 There's Billy in the pen again. The snow was quite deep at one time. We had snow on the ground still the last two times it snowed in my neck of the woods. Not much sunshine gets to the snow you see here. 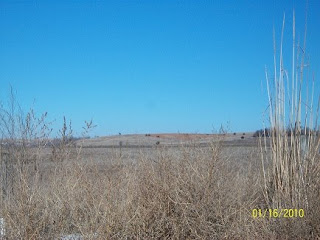 Beautiful blue skies to the north. This is what I see when I look north walking across my yard to my sister's house. Most of those little black dots on the hill back there are little pine trees. There is one dot right on top the hill that is a sculpture of a bull. I'll have to take a better picture of it. There's another one not a half mile to the east on another hill to the north. I can see them both at the same time. It's dark out now or I'd go take another picture.

I like the wide open spaces in my space. The field you see in this picture is where the deer congregate to eat wheat when there is wheat growing in this field. Nothing growing out there right now....if memory serves me correctly, there was milo planted in this field last year. The deer were there then as well. Wild turkeys, all kinds of critters out there in that field. My cats think it is their own personal hunting ground. I'm sure there are plenty of little varmints to be had out there! 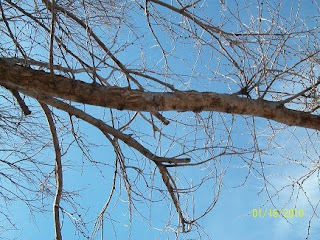 I've rambled on enough today. You all go get your hugs and give a few back as well. I'll see what I can do in that department.

Looks as though I am headed to Kearny, Nebraska in about an hour's time.

great cards, love all those chili peppers! I love all the wide open space where you are, it's beautiful in the photos and I bet it's even better in person!!

How AWESOME is all this art?!??! WOW! I adore that first Chili Pepper. And I completely agree w/CherylAnn, that ballroom card is beautifully done. :D Great cards.