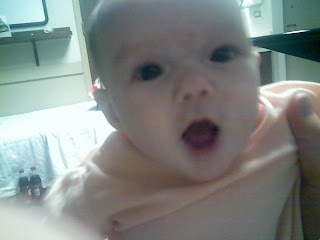 Good Morning Good People!
I do hope it's a good morning for you all. I woke up at 10 a.m. with a killer headache. I think the weather has a lot to do with that headache being here! I stumbled back to the kitchen after getting the pc up, going to make coffee and found a dead mouse floating in the pan of water in the sink. Better a dead mouse in the sink than a live one in the bread box. The cat, which cat I don't know, had knocked dishes over on the draining rack so I'm assuming said cat chased that mouse into the sink and then couldn't get it out of the water where it swam till it died. I tossed the dead critter outside
(Sorry, you all probably didn't need a dead critter story right off the bat, did you?)
There's new snow on the ground this morning. I said I didn't want any more snow. Someone wasn't listening apparently! :) Not a lot of snow, just a dusting, just enough to make it cold as all get out and to play havoc with my head.
That beautiful little girl that greeted you at the beginning of this post is my grand daughter, Annabel Mae. It has been a few weeks since I have seen Miss Annabel. Her mama says she's growing like a weed! I can believe that! Talked to her papa (my son RJ) a few days ago on the phone and heard Annabel in the background just a hollering her little lungs out. RJ said he was trying to get her to take a nap. He is an excellent daddy. Dotes on that little girl as much as he does 7 yr old, Brenton. Brenton was part of the package deal when he hooked up with Terah. He's a good boy, Brenton is. RJ is a good boy as well.
I didn't think any of yous would object to having to look at an adorable child this morning. Annabel is now 5 and 1/2 months old.
I hear my brother outside in the trailerhouse shed as I sit here typing this morning. He apparently doesn't notice the new snow on the ground. He's tearing crap apart out there! Taking down the ceiling panels this morning. I'm not going out to help him, it's too cold and my head still hurts.
My youngest son should be here in about an hour so I better get this post done and over with.
Here's some art. Only two pieces from yesterday. I thought there might end up being more but I got caught up in playing majong and didn't get any more drawing done!
Enjoy. 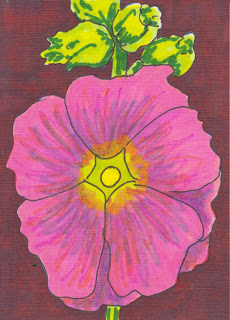 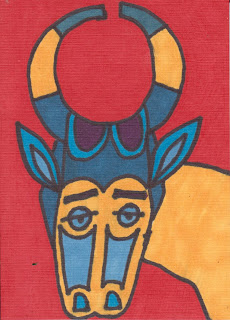 Sacred Bull
ATC
28 January 2010
Markers on recycled cardstock.
I see someone needs to clean the scanner bed again. Those black specks on the bull are not actually on the card. That black speck doesn't show up near as well on the Hollyhock. It's there though.
I didn't go to the museum in Logan with Ma the other day. I begged off cause of a damned headache and all the other crap I needed to get done. The exhibit runs through the end of February so we will still go see it.
You all get some Friday hugs and kisses. I'll be collecting my hugs here shortly when RW, Lue and 4 yr old Gavin show up. Have a good one, people!
Peace
831
Posted by Donna at 11:12 AM

she is a li'l sweetie pie. and the cards are fab.

great cards as always, no mind to the scanner specks! I forget to clean the glass on mine too!

That little Anabel is a sweetheart!

I can relate to those headaches, I too am a human barometer and everytime the pressure changes, I have migraines. This year has been the worst, I have had one for going on 3 days now. Not as bad as some but, bad enough!