Wednesday is indeed just starting...only 1:40 a.m. as I start typing this post out.
Sleep is a mess still. My family just doesn't understand my sleeping patterns. But then neither do I. I hurt like a big dog today and there are dishes, laundry, vaccuuming and tree dismantling to be done. I really want the Christmas out of the livingroom! It's been there quite long enough!
I have laundry started, two loads down and still about five or six to go. I let that laundry get out of hand! And we won't talk about the state of the kitchen...it's atrocious actually. I intend on tackling that today as well.
I've been working on downloading my cd collection to this new pc since I got up earlier this evening. Got Nickleback in right now. Had LeAnne Womack just previous. I have quite an electic collection of music. I lost all the music files from the old pc cause I don't have any idea how to transfer them to the new pc so I just started over. No biggie! I don't have all the cds that were on the old pc, but most of them and then some that were never downloaded to the old pc so I have a whole new collection of music on the new pc, basically.

Here is the ATC for the 365 Project for the 12th. Got it drawn as the time was drawing near...was about 11:30 p.m. when I drew it. Lots of the participants were doing pears for their daily ATCs so I just decided I'd do one as well. There are some awesome pears in the collection from some awesome artists. 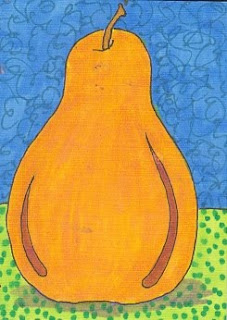 Pear #48
Markers on recycled cardstock.
12 January 2010
Why pear #48? Well, it certainly is not the 48th pear I've drawn, least I don't think it is. Pear just didn't seem enough for a title! I've done that before though, put a number, a random number behind the title of an ATC.
This is the only piece of art I have to show you all today. Enjoy.
If I hadn't slept the day away on Tuesday, I may have gone outside and taken some pictures with the camera, but beings I did sleep Tuesday away....16 hours of it anyway... I did not get outside to take any pictures! It was a nice day out too.
The snow is melting quite nicely and leaving some puddles behind. There's a nice big puddle by the front door that I wish was not there, but the dog seems not to notice it is there and he hasn't stepped in it on his way back into the house.
I'd love to show you all the cutest video I took of my granddaughter sitting on my son's lap over Christmas but I can't figure out how to add video to these posts. Gonna have to study on that. Annabel was blowing raspberries. She's only 4 months old in that video. It was just too cute! Next post I'll show you all a picture of her and her papa.
The kids keep trying to get me to move down to Nickerson where they are. That ain't happening though! No matter how much I miss them, I cannot just pack up and move! Just can't do it!
I should have more than just one ATC to show you all tomorrow. I have pictures on the camera of another book I sewed up the day before yesterday but I've yet to download those pictures. When the book covers are dry that I just gessoed, I'll get them decorated and the book sewn and you'll get to see that one too. I already have the pages cut and holes punched in them for sewing. I have to go out to the garage (in the dark) to get the foil tape to use on the book covers I just gessoed. I probably could have foregone the gessoing but it's already done so gessoed they are! Might as well walk across the highway and get the mail out of the mailbox while I'm out there.
I have paperwork to fill out tonight as well. That paperwork has got to be done and returned by the end of the week! That's a must! I have to do that paperwork every January and I hate having to do it. It's not a hard task, it's just that I don't like doing it! It isn't just filling out their paperwork, it's also gathering other paperwork for them. A trip to the bank is in order for that paperwork too.
Hopefully my van is fixed. I don't know if it is or not. Sam looked at it on Monday, put the battery charger on it. I don't know if it started or not though cause I went to sleep before he was done with it and he never wakes me for anything. It wouldn't matter if he did wake me...I'll go back to sleep without any trouble but that's just how my brother is. I think he thinks I will get mad if he wakes me but I won't get mad. I never get mad about anything too often. It takes a great deal to get me angry and waking me from sleep is not one of those things!
Well, I'm just rambling now so I'll close out this post and bid you all a wonderful Wednesday! Go get your hugs!
Peace
831
Posted by Donna at 1:38 AM

I'm just loving all these pears! Yours is beautiful and looks good enough to take a bite out of!

I was just looking at your book binding post too. Very nice. :)

Thanks for stopping by, Cat and Cheryl.