Fish Picture 3 Progress and An Outing with Pictures

I've been working on the fish picture 3 this morning.
The canvas still looks pretty much the same as the last time except you can see the pink strings better in this shot cause I've added some glass seed beads, gold colored. 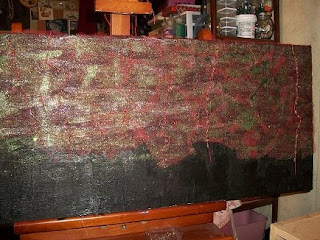 Here are the fishes in their almost finished state. They still need some eyes and a bit more color...I'm thinking a touch of gold glitter and they will be done and ready to go on the canvas as soon as I figure out how I'm going to do the sea floor. I need to make some more coral as well and a starfish or two and if I can figure out how to make a decent sea anenome there will be a few of those as well. 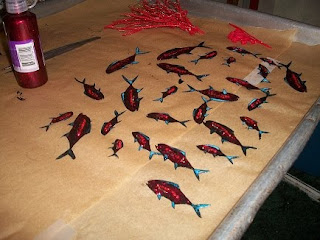 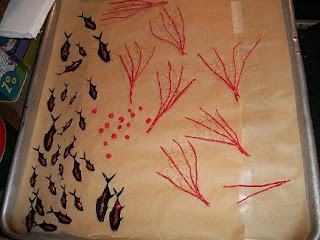 Here is the fan coral I finished early this morning. The red 'sticks' are red tissue paper rolled into a stick with a touch of fabric stiffener, left to dry overnight. I had company yesterday for a few hours and we sat in the living room playing with the electronic crap that's laying on my coffee table. My sister Linda unwound some copper wire from a part from an old VCR. I used it this morning to make the fan coral along with the red sticks of tissue paper. Not sure what will happen with the little balls of tissue paper but they will more than likely end up on the canvas somewhere. 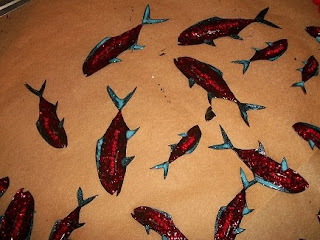 Here is a close up of the fishes with the blue glitter paint and the red glitter glue still wet. I'll show you pictures in the next post of the fishes all dry with their eyes and a bit more color.
I have two ATCs done but not scanned so you'll see ATCs in the next post for sure.
I have two ATCs with line drawings but no color on them. I'm hoping they will be completed before the next post and you can see those as well. If all goes according to plan you'll get to see even more art than that!
On Friday I spent 19 hours straight with my brother. We went on a drive in the country all afternoon and into the evening. We took the dog to the lake first thing in the afternoon then we dropped the dog off at home and continued our journey.
I took pictures along the way. Enjoy! 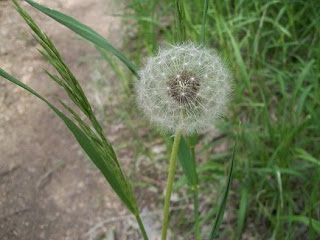 Dandelion seed head at the river by Alton. 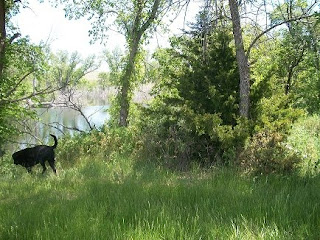 Fred at the south entrance to the state lake. It was so pretty at the State Lake that day! 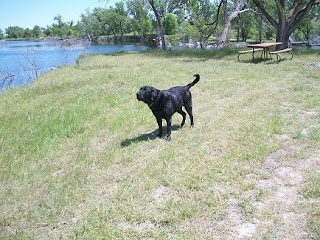 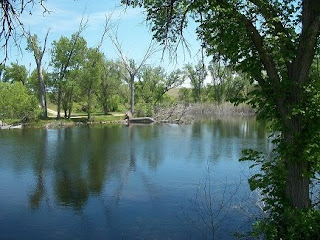 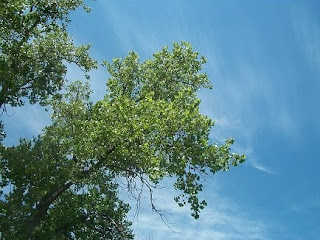 The top of a cottonwood tree next to the State Lake. 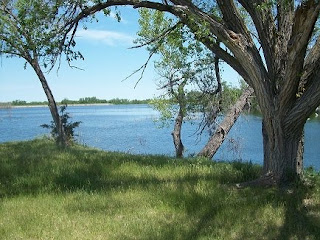 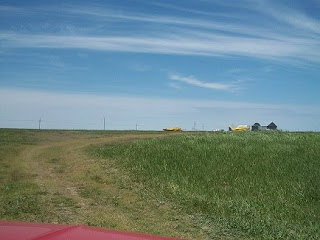 2 Yellow Crop Dusters at the Stockton Airport. We saw these guys flying around all day. We covered quite a few miles and saw them many times! 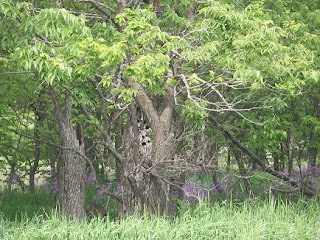 The woodpecker tree by the river at Alton. Notice all the purple flowers growing beneath the trees. It smelled wonderful in this spot! I wish there were such a thing as smellivision cause I can't describe the fragrance of these lovely purple flowers! 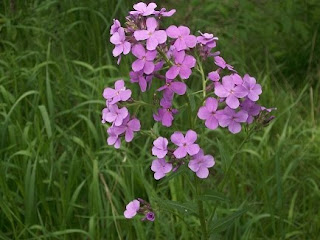 Best picture I took all day! 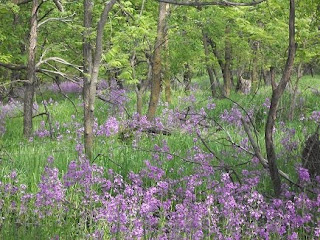 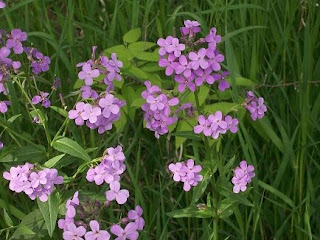 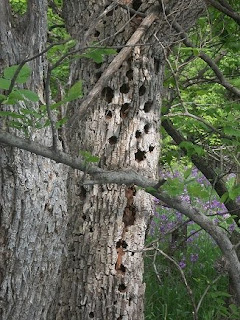 A close up of the woodpecker tree.
The only bad part about these trees were the ticks. I pulled one out of my hair two minutes after I walked into the trees to take pictures of the flowers. And found another one later in the day when I showered. Thankfully it wasn't attached to me yet, just hitching a ride. He went down the drain! 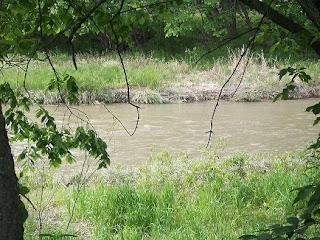 The River. I wish I could tell you which river this is but I'm really not certain which river it is. I think it is the Solomon River, but I'm not sure about that.  OK. It is the Solomon River. I looked at the map. Had to find a map first though...looked in the atlas but Kansas is gone from that atlas...seems to me I used it on the cover of a little book not too long ago. Anyway I found an old map of Kansas in the map box. I know the highways have changed, but the rivers don't so...yeah, it's the Solomon. 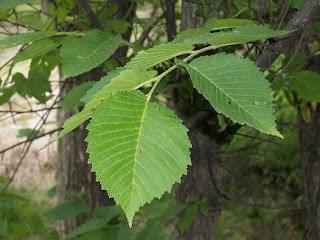 Another pretty decent picture for the day! 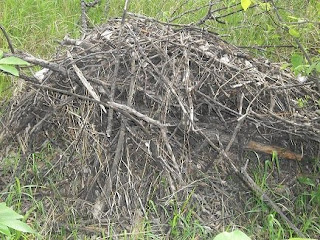 This is a pack rat nest. My brother assured me the pack rat was probably at home. I wasn't much interested in whether the critter was home or not, I just wanted a picture of his house. 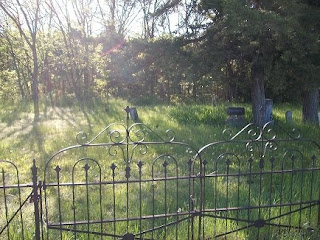 We came across three cemetaries on our travels on Friday. This one with the cool wrought iron fence was out in the middle of nowhere! Somewhere in Phillips County. I couldn't find it again if my life depended on it. It was a lovely little cemetary with stones dating back to the late 1880s. If memory serves me correctly the oldest date in this cemetary was 1843? Old stones! It was so peaceful and shady there. A nice place to be planted I'd say. That fence was gorgeous! Hand wrought...probably put there when the cemetary was established. Quite a nice find out in the middle of nowhere! 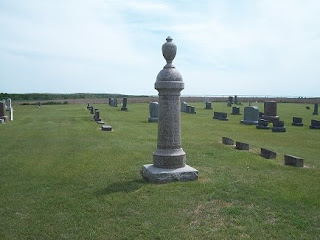 We found this rather striking monument in the Greenwood Cemetary. I'm not sure if the Greenwood Cemetary is in Osborne, Phillips or Rooks County, Kansas. We traversed all three counties that day.
I'll let you decide what you think it reminds you of.
Unfortunately I wasn't thinking when we came across the Cemetary over by Kirwin and there are no photos of anything there. 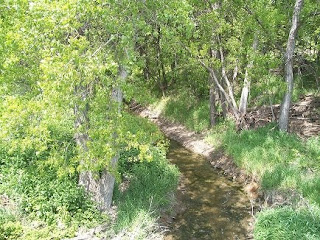 My brother has a thing about bridges. He thinks he has to stop, get out of the truck and take a look under every bridge he comes across out in the country. You never know what you'll find, is what he tells me. I suppose he's right about that but we found nothing of any interest under this bridge. I thought the little creek was quite pretty though. 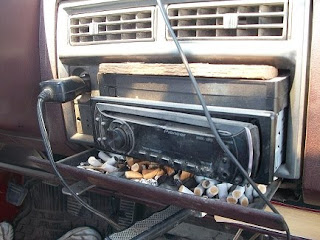 There! I Fixed It!
My brother's stereo in his truck. That's a VCR tape and a piece of wood holding his stereo in the factory hole in the dash. This stereo works wonderfully! I just thought it hilarious that he has it rigged up this way. He really needs to empty his ashtray!
And you all really need to get your hugs for the day!
:)
Be good to one another. It matters!
Peace
831
Posted by Donna at 6:18 PM