Hello Readers!
I've some art to show for the last few days. I've little else to show for those days gone but life is happening. Those dishes are still screaming from the kitchen and the laundry is still heaped in the bedroom.
I've been busy with my new markers. Best present I've gotten in a long time! Most useful one at the very least! Thank you, Aunt Sherry! :)
I have naked blue guys to draw for a swap and all of the fellas I've drawn I've not been pleased with. This one is no exception to that.... 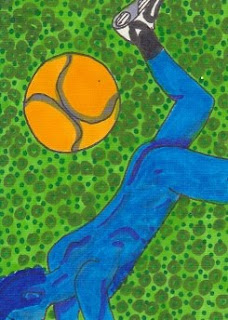 The Incident at Wimbledon
ATC
3 May 2010
365 Project Day #125
fibracolor markers on recycled cardstock.
This inspired by a true incident. I'm not sure that is what it was referred to, but that's what I'm referring to it as...an incident. I Googled 'naked blue men' and a picture of a perfectly colored naked white man cartwheeling over a tennis court came up in the que. I clicked on it to get a better look. It was a man in his mid 30s perhaps, I'm guessing there...doing cartwheels in his birthday suit plus sneakers and black socks across the tennis court at Wimbledon. My rendering of said photograph... Sucks! I''m going to have to give this one another shot. 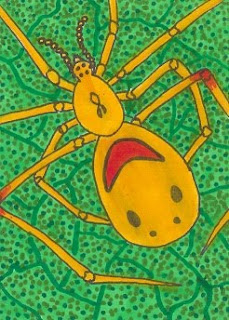 Happy Face Spider
ATC
6 May 2010
365 Project Day #126
fibracolor markers on recycled cardstock
I found this guy on a list of the 10 weirdest spiders. Someone sent me some postcards of Happy Face Spiders when I first started trading art. I still have them around here somewhere. 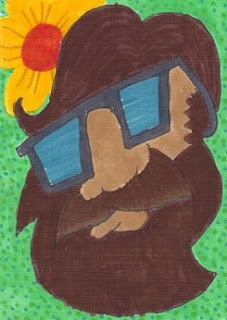 Mr. Cool
ATC
5 May 2010
365 Project Day #127
fibracolor markers on recycled cardstock
I like his glasses. He vaguely reminds me of my late husband.
I have made another little blank book as well but I didn't take a picture of it. Not yet anyway.
The other day when I went to see the blood doc, that would have been on Wednesday, I went shopping after the doc sent me on my way with instructions to come see him again in six months. Seems I'll live afterall! :)
I'm really not much for shopping. I was after a few things though and I went to find them. Nevermind that I came home with some other stuff I wasn't exactly looking. I was on the hunt for a canvas for another fish picture and found the perfect one at Goodwill for $3. It had seagulls on it. I'm fairly sure it wasn't a bad thing that I covered it up with dictionary pages, black crepe paper and green glitter paint last night. I should have taken a picture of it before I did that but, well, sometimes I ain't quite on top o' things if you know what I mean! Not to be critical, but I hope "John" who signed the seagull painting has improved in his painting skills since the seagulls invaded his muse! I'm also hoping my own muse doesn't fail me so miserably. I've no idea what comes next....
In this post blog, Markers come next. 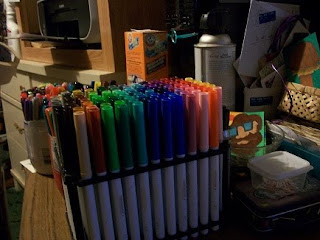 Joss asked about the markers so here they are, my friend. fibercolor is their brand. I'm too lazy this morning to go find a link for you but Dick Blick sells them if you're inclinded to delve further into study of them. I love them! Pay no attention that cluttered desk. This whole room is cluttered.
I've been working on another little book for the last few days. I'm very pleased with how it's coming along! Gonna be a pretty little book when I'm done with it! Hopefully it will sew together nice and tight. That's the hard part about making books...sewing those signatures securely to the covers.
I'm using some canvas stuff on this little book that I bought at a yardsale some time back. It had no label. I've no clue what it's original purpose is. It is canvas like you would paint pictures on only a bit stiffer. I went to Home Depot on my shopping spree to inquire about this mystery stuff. It's still mystery stuff cause those boys at Home Depot thought I was absolutely nuts explaining what this stuff is. I thought it was for like repairing drywall or something you know. Apparently not. I'm almost out of it and it's really cool stuff. I'd like to find more.
I downloaded pictures from the camera earlier this evening. I'm really not sure when these pictures were taken. If I got up and looked in my daybook I might be able to tell you but the closest I can figure is the end of April...29th, may the 30th? I'm just not sure! It might not even be in the date book. I've been a bit slack in that department for a week or more...
I do remember that I was on a roadtrip with Sammy. We must of been heading home....from Abilene with the tin for Susan's pumphouse in the back of the truck. We had fun that day. It was a long, long day but it was a good day. I acquired a lot of good things for the art business that trip.
These pictures have nothing to do with the good stuff brought home though. It has to do with the scenery on the drive home.
It was a perfect day for a drive. Not too cold, not too hot. Clear blue skies with those puffy little white clouds. Good company. Good tunes on the radio. Adventures to complete.... it was an excellent day!
Between Lucas and Luray, Kansas on hwy 18 looking north
Between Luray and Waldo, Kansas on Hwy 18 looking north. 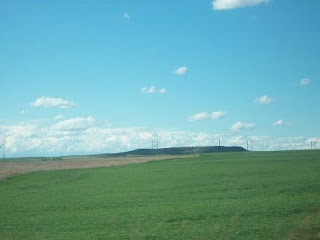 A couple miles east of Waldo, Kansas on Hwy 18 looking north. I've no clue what they call this hill but I'm sure it has a local's name. 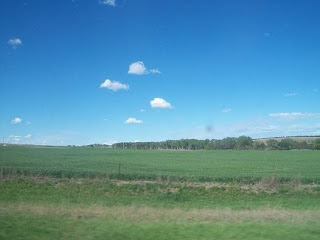 A little closer to Waldo than the last photo.
A lot of folks think that Kansas is flat. This picture would lead one to say, "yep, looks flat to me", but it isn't really flat all over... we have a lot of open space that leads to hills.
You thought I was kidding about Waldo, Kansas.....it's hard to see in this little picture but that water tower says WALDO. Don't blink when going through Waldo. You'll miss the scenery! I think there were only six pictures on the smartcard of the journey through Waldo...one right after another.  So don't ask me where's Waldo? I know exactly where Waldo is! lol
The road sign right outside of Waldo says Paradise is about 17 miles down the road too. To get home from Waldo I still have about 70 miles to go.
If memory serves me correctly I was having trouble with my right arm on that drive home. Damn thing has a mind of its own some days and it hurts like the dickens if I do too much with it. I only had 70 pictures on the smart card and they were taken over six days time. 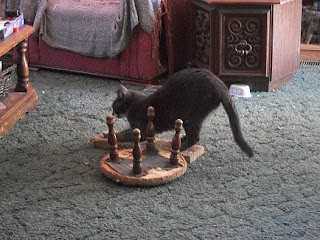 Billy-Mr. Mess Maker! loves cardboard! My sister's cat would have a thing to do with this carboard scratching box so she threw it in the wheelbarrow to go to the rubbish bins (which are a ways from her door). That silly cat was in the wheelbarrow just going at this thing so I brought it home for him. He sleeps on it! And he scratches the devil out of it. He's to blame for the little footstool in its state too. He gets to going on that scratching box and he loses his mind! One happy cat and all it took was trash! Go figure! This picture was taken a few days ago...he's got little chunks of carboard all over the floor around that thing today. Time to vaccuum.
And just because I've never shown my face here I thought I'd say Good Morning! 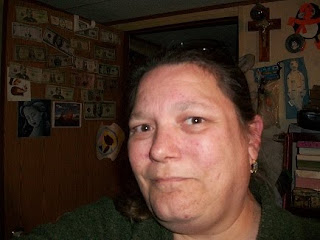 Get your hugs today! Shoot a few smiles out there as well! Have a wonderful Friday!
Peace
831
Posted by Donna at 5:27 AM

oooh i love seeing your face - you are a cutie patootie friend. thans for the marker info, will reseacrh them here. i love the blue footballer, he is great (and has no bits flying in the wind)LOL. your blue men rock, you know that's my opinion! huggles.