hello Readers!
Apparently I've been busy since yesterday....I have a few things to show you today. A few of them are older than just yesterday. Not sure how I spaced them out in the last post!
Not much going on in my world other than sitting around making stuff!
That's to change tomorrow though. I'm going on a road trip. You won't be hearing from me for at least 2 days. I believe a trip to the zoo is in order along with visiting a couple of my sisters, my son and his family and just generally running amuck with a couple of my other sisters. Should be a great time!
Guess what is here will have to tide you over till I get back from my trip.
Don't worry, I'll have something to show you! I'll probably take along some wire and seed beads to make more dragonflies. I won't leave home empty-handed. I'll need something to occupy those hands on the three hour drive to get there and home again. Even more driving time if we go see our other sister. The itinerary isn't exactly set in stone at this point. It will be a good time though and I promise to have something to show for the trip other than a bunch of junk brought home on the shopping sprees in thrift stores along the way!
Anyway.....here's what's new.... 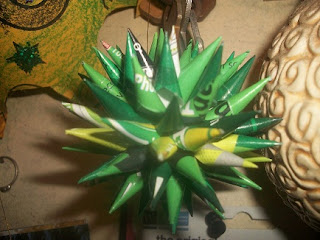 this is the green polish star I forgot to take a picture of yesterday. 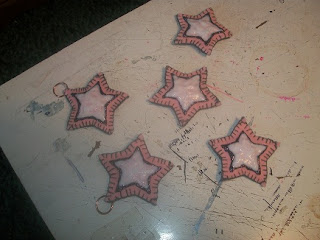 I'm still fiddling with those pink felt stars. I think they're done now. 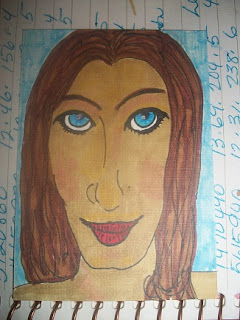 I played a bunch of games of mahjongg in the last few days. This ATC is laying on my list of scores. Didn't realize the background was almost the same color as my ink pen until I go that picture here.
Markers on cardstock.

I played around with paper a few days ago.
This paper flower magnet resulted. That's a metal button in the center of it. It's about three inches across, five layers of paper curled or folded. An experiment that worked wonderfully! This one is made of orchard paper. Orchard paper is my go-to paper for experimenting with folding. That or magazine paper. I'll probably make more of these in the future. 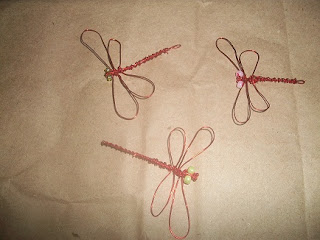 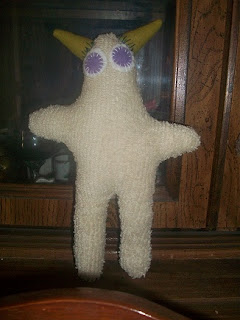 I gave the monster twin some eyes this morning. 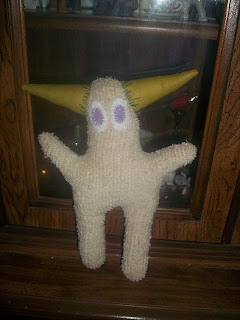 Here's the first of the twin monsters.
They don't look near as much alike as I remembered them appearing when I cut them out. 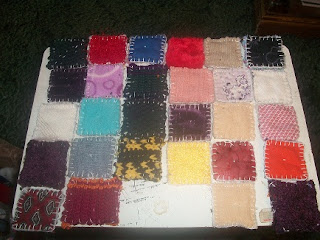 This is the beginnings of a project I've been working on since around October 2011. I started on these 2 inch quilted squares about the same time I started making monsters. I add a square or two when the urge hits me. I recently dragged them to the livingroom so they'd be right at hand when I am sewing monsters or mug rugs. Still a long ways to go before I can call this project anywhere near finished. 38 squares does not a quilt make! Not even a doll quilt can be made from 38 squares!
All the squares are from material I have used for a sewing project of one thing or another; be it monsters, rug mugs, hot pad holders or dottee dolls. There is a piece of quilt batting sandwiched between two pieces of fabric. Most of the squares have a different fabric on either side but some are the same on either side.
You'll see this project again when I've made a bit more leadway. 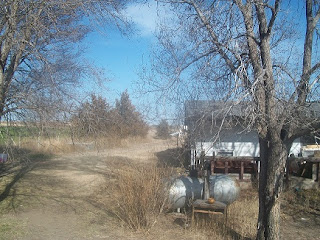 It's a beautiful day in my neighborhood!
You can barely see the green of the wheatfield back by the evergreen trees.
I really need to get Sammy to haul that old table out of the front yard and to his wood pile!
You all be good to one another!
I'll see you in a few days!
Peace!
831
Posted by Donna at 5:05 PM