Polish Stars, Dragonflies, A Couple of Green Things and Progress

Hello Readers!
I watched a bit of television programming today. About 9 hours worth of The Firm.
The dishes got done. A monster was sewn, though not finished completely. I drew a couple pictures,
I sewed a little book, I folded and assembled a few polish stars and I made a few more dragonflies.
I've been a busy girl.
Whether or not you consider any of it art is entirely up to you.
I just make the stuff. Others can argue about its virtue.
Here we go! 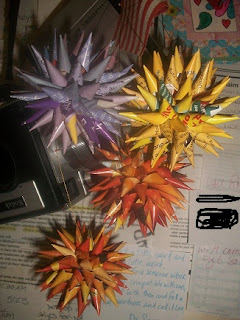 The two orange ones are the two I showed you in the last post. I said the yellow one was in the works and it would probably have a mate when you seen it next. Yep, it does have a mate and a few others to go along with it! Watching TV is quite conducive to assembling polish stars! 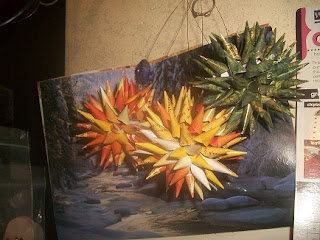 Here are three more. It has just dawned on me that I did not get the other polish star made today in the picture with these three....it's hanging on a peg not three inches above the green one in this picture! It too is green, just a different shade of green.
They're all made from magazine paper.
I believe I now have right at 40 polish stars completed. There are still many circles cut and ready for making more polish stars so expect to see a few more in the future.
I have become almost obsessed with dragonflies. 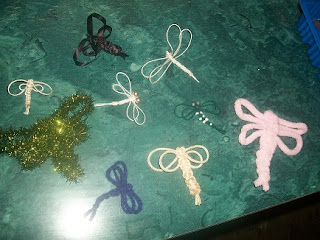 I have made a dragonfly out of almost every type of string I have on hand.
Some are quite successful, like the green one with white beads on its body...that one turned out great! And then there are the not so good ones like the black one, made out of some sort of stiff ribbon. The sparkly green one doesn't look like a dragonfly at all to me...more like a butterfly or moth. Not a complete failure though. The white one in the middle is the first one I made that the eyes actually worked out like they should! I soldiered on! The easiest one to tie was the big pink one!
I'll probably be making more of these.
I did a bit of drawing.... 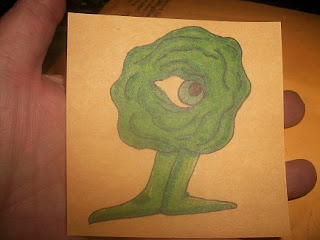 A one-eyed, no armed green monster for the paper bag book.
Markers on orchard paper. 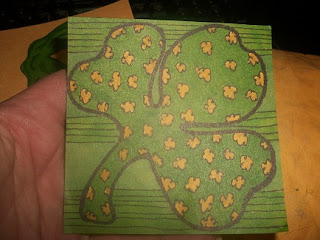 Green was the theme of the day apparently....
another green thing for the paper bag book.
Markers on orchard paper. 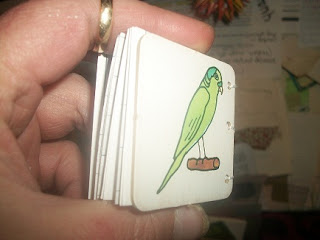 I sewed a little book.
This one was cut out and readied for sewing couple weeks ago.
It has an owl on the other cover. 2x2 inches, 3signatures of Day Runner Refill paper.
Sewn with crochet cotton. 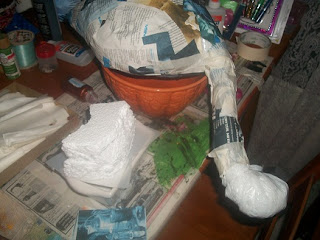 And finally...
the flamingo. His beak still needs carved. He still needs his head paper mached. I did however add a bit of masking tape to his neck....the flamingo just isn't talking to me much these days....He will though. Soon.
I sewed a monster today as well as all these other things shown. The monster isn't shown cause he's not quite done yet. He still needs some eyes and maybe some hair....I may turn him into a her by the addition of some pink hair cause right now he looks a great deal like the last monster you all saw on these pages.
I started another project the day before yesterday. Still a bit of preparation to do with that project before I unveil it though. Some thought needs put to it as well as some hands on approach. At the moment that involves covering something to disguise what it was and to make it useful in an artful endeavor. I know it will work, I've done it before....I think there were six of them when I first did these...I've just never undertaken the number of them I intend to take on this time! You all will see what I'm talking about when it gets off the ground a bit farther than it is at present.
Be good to one another!
It matters!
Peace, Friends!
831
Posted by Donna at 10:10 PM