I really don't have a lot to show for the days that have passed since I last posted.
I'm working on a new origami project that is giving me fits.
I spent a day out in the burnt house going through crap out there so no art got made that day.
I haven't touched the tiny monster. He's still only half-sewn.

I said my drawing muse was faunchin' at the bit in the last post but there are no new drawings to show. I didn't let her run like she wanted and now she's gone off to pastures elsewhere for the time being. 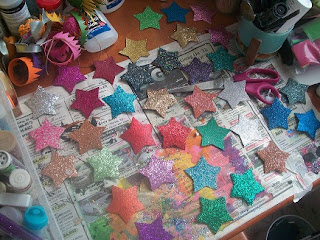 I did drag out the glitter!
Made myself a right fine mess with that glitter! And left it all over the kitchen table for the last two days,

leaving these stars unfinished as well. I'll be making a bigger mess with the glitter in days to come when I finish up these stars. I'm not even certain what these stars are going to turn into. My mother suggested a mobile or two. I've never made a mobile. Ever. Not even sure how to go about it!
I was thinking star garlands for my two daughters-in-law. They both adore stars! And who doesn't like a bit of glitter?
There are, I think, 36 stars. I'd have to count them again to be certain. Either 35 or 36. You count them and then if I'm way off you can set me straight! :)
At any rate, I cut out a boatload of stars from a cake mix box and an ice cream bar box. They've been glittered on the unpainted side of the box. I'll give them all a layer of colored paper to correspond with the glitter color they'll get on the other side.
I have TONS of glitter! Ok, maybe not TONS, but a LOT!
Each of those stars has a different color glitter. The backsides probably won't match the front sides as I don't think I can remember correctly which glitter is on which star!
It was fun making a mess with that glitter. I haven't mopped the kitchen floor yet but when I do, that mop is gonna sparkle! I had glitter on the ends of my toes that day!
Sparklies everywhere!
Gotta love it!

I'm working on some toilet paper tube flowers as well. You can see a few of them at the top of the picture with the glittery stars. They're giving me a hard time just like that danged flamingo and that origami project I took up yesterday.

There are bound to be lulls in the creativity from time to time. I'll keep soldiering on though.
I updated my list of things made thus far earlier today.
By my calculations, there are 200 items on that list already so I'm way ahead of the goal of making 366 things this year! One for each day of the year.

Spring appears to have arrived in my neck of the woods! 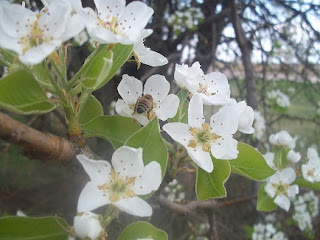 Honey bees are sampling the pear tree blossoms, insuring pears will form. Its all up to the weather as how well they do.
I took this picture today, late in the afternoon. There were many different kinds of insects on the pear tree and on the plum bushes.
I am hoping for another bumper crop of pears this year.
Pray for no heavy frosts. 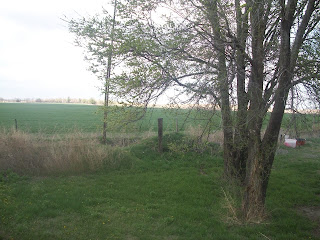 The winter wheat in the north forty is looking good!
That isn't my wheat...it just grows right next to my property. And I don't know that that really is the north forty either. I call it that cause it's to the north.
This is my favorite shade of green! It was a beautiful day today!
Fred agrees! He stayed outside most of the day. 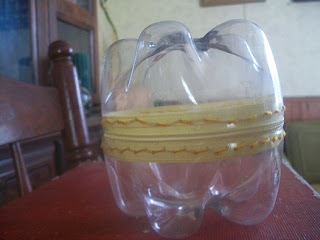 And the last thing to show you all is the yellow zippered container I sewed up yesterday.
It is 2 two liter soda bottles with a zipper sewn to the bottoms of said bottles.
I got a boatload of zippers in the mail this past week for just this purpose! You'll see more of these as soon as I gather some more soda bottles. I gave up Coca Cola so I don't generate too many plastic bottles.
Any plastic bottle will work. You just need to be able to poke holes in and have a zipper long enough to go around it! Easy to make!!!!

I love the zipper Idea, I have never seen anything like that idea...